Accessibility links
'Gods Of Jade And Shadow' Spins A Dark, Dazzling Fairy Tale Silvia Moreno-Garcia's novel is set in an alternate Jazz Age Mexico, where gods and monsters from Mayan mythology walk the Earth and war with each other for dominion over Xibalba, the land of death. 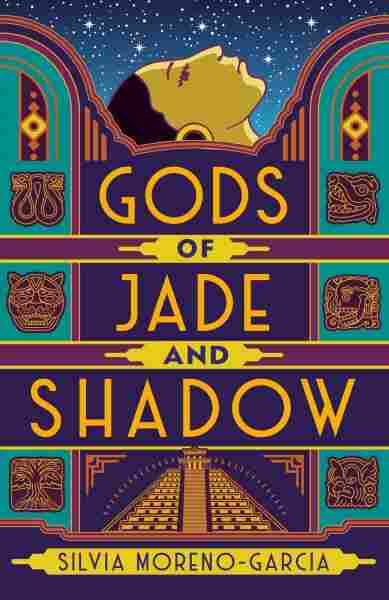 Gods of Jade and Shadow

Novelist and NPR contributor Silvia Moreno-Garcia's new fantasy, Gods of Jade and Shadow, is at its witty, compelling, and merciless best when it is fully rooted in its setting, a perfectly organic combination of 1920s Jazz Age Mexico and the Mayan mythological text, the Popol Vuh. The plot of the book is simple: A young woman, Casiopeia Tun, is suffering Cinderella-esque deprivation in the house of her grandfather, a wealthy rural landholder in the Yucatán. She stumbles upon a locked chest containing (most of) the dismembered body of one of the Lords of Xilbalba, a Mayan god of death called Hun-Kamé, and frees him — becoming spiritually linked to him in the process. Hun-Kamé has been deposed from his throne by his twin brother, Vucub-Kamé, and Casiopeia finds herself first an unwilling and then an active participant in his quest to take revenge and reclaim his standing as the ruler of Xilbaba.

So far, so fairy-tale — though the pleasure of seeing Mayan mythology underlying what at first seems to be a straightforward rendition of the Cinderella trope adds immediate interest to Moreno-Garcia's work. Nevertheless, for the first few chapters of Gods of Jade and Shadow, the dominant tone is that of the basic fairy-tale retelling, and while Casiopeia's anger, frustration, and family entanglements are all well-drawn, they are nothing particularly special. The book comes into itself the moment Casiopeia is entangled with Hun-Kamé, and Moreno-Garcia takes her, and the reader, on a whirlwind tour of a 1920s Mexico vivid with jazz, the memories of revolution, and gods, demons, and magic which are both indigenous and foreign-born.

Casiopeia and Hun-Kamé travel from Casiopeia's small Yucatán town to the rural "big city" of Merída — and then on to Veracruz, Mexico City, and Baja California, acquiring Hun-Kamé's stolen magic (and body parts) as they go. But the real fascination of their journey is the relationship between them: Hun-Kamé is using Casiopeia's mortal life force to remain present in the world of men, but the process is both killing her and making him less of a god of death and more a young man. Casiopeia is rightfully angry at what Hun-Kamé demands of her; but they develop a complex, shifting, and deepening understanding of one another. Their travels are not merely those of an underprivileged and oppressed young woman finding her place in the wide and exciting world of the Jazz Age — nor are they the (expected) version of a love story, where the devotion of a mortal woman redeems and saves the heart of a god.

This is not your European mythological landscape, after all. And the Xilbalba of Gods of Jade and Shadow is not even slightly defanged — it is a place of blood sacrifice, hungry ghosts, despair and confusion. Hun-Kamé is merciless, as death is; his twin, Vucub-Kamé, is both merciless and cruel. (Vucub-Kamé's cooption of the will, desires, and eventually body of Casiopeia's unpleasant cousin Martín is one of the more disturbing threads woven through the novel. His plans to reinstitute human sacrifice across the Mesoamerican peninsula are actually less upsetting in comparison.)

Moreno-Garcia's book is a dispatch from a universe where indigenous American legends have always been part of the lexicon of fantasy. That universe gets closer to being ours every day, and we are better for it.

At the end of a quest, or a fairytale, the hero must make a choice: usually selfishness or selflessness, safety and power or love. Casiopeia, even before she experiences the emotional and physical excoriation of walking the Black Road through Xilbaba for Hun-Kamé's sake, has already made her choice. Confronted with the option of either having a version of Hun-Kamé who has come to love her, or losing him entirely in exchange for both keeping her promises to him and freeing herself, her cousin, and possibly all of Mexico from Vucub-Kamé's plans, she chooses like a hero, like an adult. Like a woman who sees a future for herself that she might build even beyond the first flush of love and freedom.

Gods of Jade and Shadow does not offer easy or simple answers. It dazzles, instead, showing the reader a world that seems entirely inevitable, a Mexico of the 1920s that would naturally be infused with Precolumbian magic — a magic which evolves and changes with colonization and modernity, and is as current, vital, and strange as any more expected mythological underpinning for a story about figuring out how to be a woman, a free spirit, and an ethical person in a rapidly changing world. It is effervescent and surprising. Like Rebecca Roanhorse's Navajo-based Sixth World fantasy series (the most recent of which is Storm of Locusts), Moreno-Garcia's book is a dispatch from a universe where indigenous American legends have always been part of the lexicon of fantasy. That universe gets closer to being ours every day, and we are better for it.