Accessibility links
'Becoming Superman' Chronicles The Life And Career Of Hollywood Screenwriter J. Michael Straczynski While the prolific Hollywood writer's career is well-documented, his personal history has been a mystery. His memoir is painful and inspiring, infuriating and full of hope, humorous and depressing. 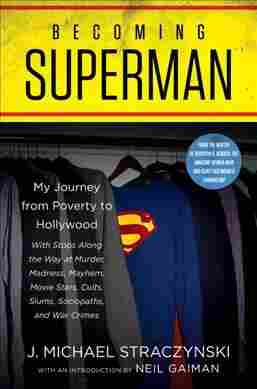 My Journey from Poverty to Hollywood, With Stops Along the Way at Murder, Madness, Mayhem, Movie Stars, Cults, Slums, Sociopaths, and War Crimes

J. Michael Straczynski's Becoming Superman is much more than a rag-to-riches story — and not only because he goes from rags to riches about half a dozen times.

Becoming Superman: My Journey From Poverty to Hollywood is a touching, devastating, unexpectedly funny memoir about a man born into a destructive, abusive environment who went on to overcome his demons — both physical and psychological — and forge a trailblazing career in animation, television, comics and movies. This memoir is simultaneously painful and inspiring, infuriating and full of hope, humorous and depressing. It is everything good storytelling should be, regardless of medium.

Straczynski's professional career has been well-documented, but his personal history has always been a bit of a mystery. The reasons for that are valid, and they are all laid bare in Becoming Superman. Straczynski was born into a family full of damaged people. His grandfather was a petty criminal who made him catch pigeons at the park. They would stuff the pigeons in paper bags, and his grandfather would bring them home and eat them in order to survive. His grandmother was a manipulative woman whose cruelty and abuse impacted various generations.

His mother, who was institutionalized more than once, had crippling depression and once tried to kill him. She told a young Straczynski to look at the birds when they were up on the roof, he recalls. Then she picked him up and dropped him "over the edge of the roof," and he "tumbled into a tangle of electrical and TV antenna wires" that kept him from slamming against the pavement below. His father was a drunken, violent individual, he recounts, who regularly beat everyone in the house and constantly forced the family to move in order to escape debt and keep them from developing friendships. Straczynski says his father was full of "sadistic violence" and calls him a man filled with "booze and evil." This father was also a Nazi sympathizer who collected Nazi memorabilia and kept a Nazi uniform in his closet.

Beyond his immediate family, Straczynski was regularly bullied and ostracized. Discovering his passion for science fiction and writing would eventually help him not only survive and move from the slums to Los Angeles but also to develop one of the most prolific writing careers in show business.

It would be easy to say Straczynski discovered comics and science-fiction novels and that saved his life, but the road to that discovery, and the decade and a half that followed, were full of hardships and abuse. In fact, cruelty and neglect were the only two constants in his life, and they shaped his childhood:

"Under normal circumstances, when a child falls or hurts himself, he knows there's at least one person he can run to for help and comfort. By contrast, I would not cry out because at best those pleas would be ignored; at worst, they would only summon more trouble. I learned to assess the situation and do what I could to fix it without asking for help. Showing vulnerability while living in a violent, neglectful environment invariably led to abuse or confinement, so inch by inch I withdrew into silence. I would sit for hours without talking, to the point where people would forget I was in the room. When I did talk, I spoke more like an adult then a child, emotionally at arms length from everyone around me."

Despite wanting to keep everyone at safe distance, his family's dynamic was not something he could escape. They moved all the time, sometimes twice in the same year. They lived in slums and his father's antics kept them in abject poverty. Surprisingly, despite dealing with beatings, murder, mental illness, racism, misogyny, child abuse, infidelity and alcoholism, Straczynski finds ways of telling horrific events with humor:

"My introduction to funerals came when my father took me to the service for a kid my age who had been playing in a gravel pit and suffocated when it collapsed. He didn't know the kid or his family, but that didn't stop him from driving around until he found the right address from an article in the newspaper. He wanted me to see a dead kid in his casket as a warning not to play in gravel pits."

What he suffered from as a child has a name: reactive attachment disorder. He also suffered, as a child and as an adult, from post-traumatic stress disorder and Asperger's syndrome. These things, however, wouldn't be officially diagnosed for another four decades. In the meantime, writing was all Straczynski knew. Writing was the way out. It was his therapy and his escape. He started as a journalist and reviewer and never stopped. After creating the show Babylon 5, he wrote "92 out of 110 hour-long episodes and five TV movies" for it, a record that is still unmatched by any other member of the Writers Guild of America. The results were predictable: bad health, carpal tunnel syndrome and a collapsed personal life. But Straczynski's passion for writing, and the way he had made it his only coping mechanism, meant he couldn't stop no matter what. And he never did.

Becoming Superman chronicles the incredible highs and the shattering lows of Straczynski's career and personal life. He was always loyal and stood by his code of ethics, which is hard to do in television. He burned a lot of bridges and made many enemies, but his ability to stay the course, to work hard at all times, and to keep writing were his salvation time and again. This book is a testament to that — and it is an inspiring, touching look at how someone born into darkness can find the light and go on to do great things.