Accessibility links
Boris Johnson Will Become U.K.'s Next Prime Minister, Winning Party Election Johnson will inherit a slate of problems from Theresa May, including a small majority in Parliament, government resignations and escalations with Iran. And then there's Brexit.

Boris Johnson To Lead Britain As Its Next Prime Minister

Boris Johnson To Lead Britain As Its Next Prime Minister 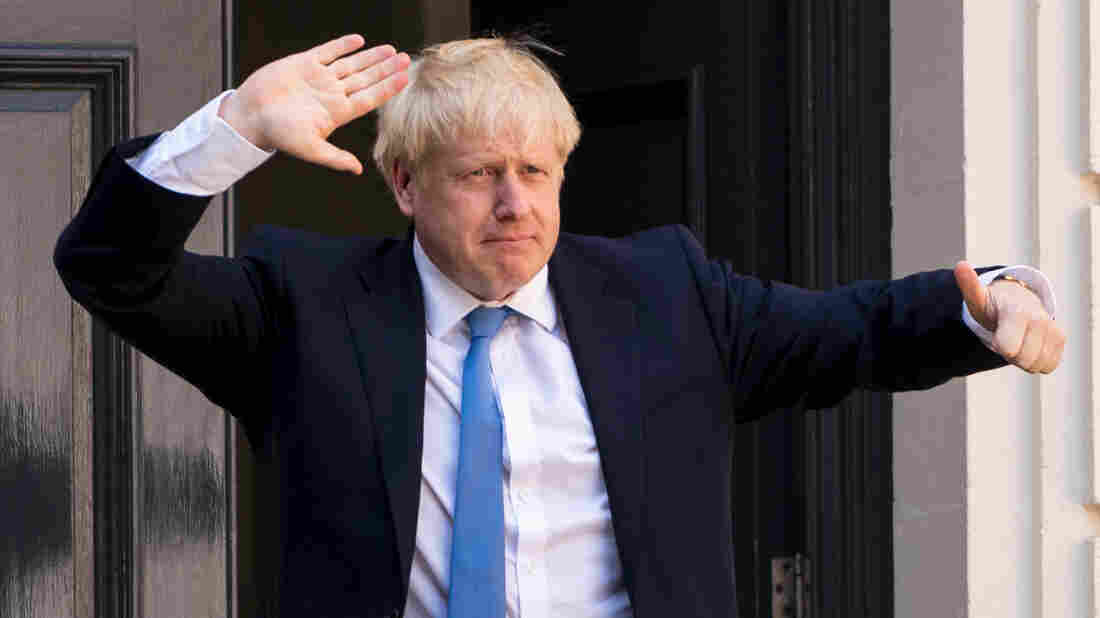 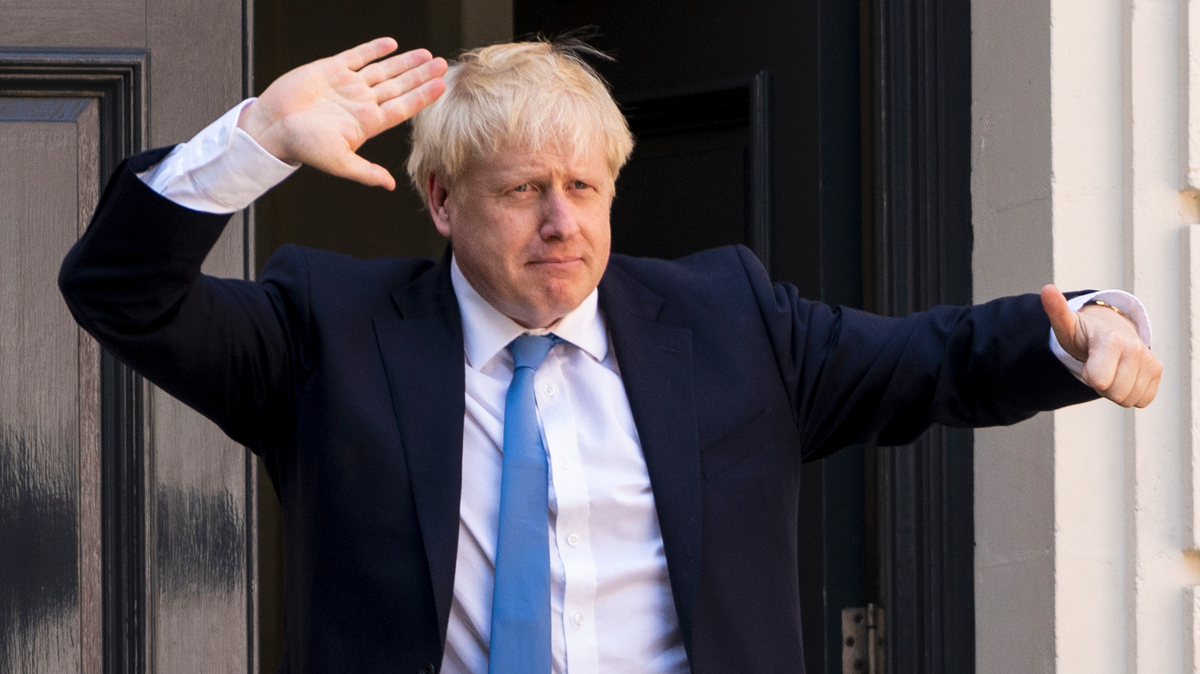 Boris Johnson, who has been elected the U.K.'s incoming prime minister, arrives at the Conservative Party's headquarters in central London on Tuesday.

Britain's Conservative Party has chosen Boris Johnson to become the country's next prime minister, replacing the pragmatic and sometimes colorless Theresa May with a bombastic populist who favors a no-deal Brexit.

Johnson walked to the lectern inside London's Queen Elizabeth II Centre, thanking his opponent, Foreign Secretary Jeremy Hunt, and the outgoing May.

"Today at this pivotal moment in our history," Johnson said, "we again have to reconcile two sets of instincts, two noble sets of instincts, between the deep desire for friendship and free trade and mutual support and security and defense between Britain and our European partners, and the simultaneous desire, equally deep and heartfelt, for democratic self-government in this country."

Members of the party overwhelmingly chose Johnson — a former journalist, foreign secretary and mayor of London who also served in May's Cabinet before quitting last year over the Brexit impasse. He defeated Hunt by a vote of 92,153 to 46,656, Gillan said.

The leadership election was triggered by May's resignation two months ago. That, in turn, followed her government's repeated failure to forge a Brexit compromise with the 28-nation European Union that could also withstand withering opposition in Parliament. May will deliver a farewell speech and officially submit her resignation to Queen Elizabeth II on Wednesday.

After May's exit, Johnson, 55, will have only a few months to broker an exit plan from the EU that is agreeable to both the British Parliament and the bloc's leadership. His transition to No. 10 Downing Street is unlikely to be a smooth one. Many lawmakers oppose a no-deal Brexit, and several members of May's Cabinet have threatened to quit the government altogether rather than serve under Johnson.

Foreign Office Minister Alan Duncan didn't even wait for the results of the poll, choosing instead to resign on Monday, citing "very grave concerns" that Johnson "flies by the seat of his pants."

"[It's] all a bit haphazard and ramshackle," he wrote in his letter of resignation.

Education Minister Anne Milton also tweeted her resignation minutes before the result was announced, saying Britain "must leave the EU in a responsible manner."

Others, including Chancellor of the Exchequer Philip Hammond, plan to resign on Wednesday.

Johnson has vowed to leave the EU by the current Oct. 31 deadline, whether or not a deal is reached. Most economists say such a move could be economically disastrous for Britain, and even before his election was made official, the U.K.'s Office of Budget Responsibility warned that a no-deal Brexit could trigger a recession.

"We are getting ready to come out on 31 October. Come what may," Johnson told reporters last month.

The EU has refused to reopen talks on Britain's withdrawal, which was painstakingly hammered out over months of negotiations with May's government — but then repeatedly rejected by Parliament.

In a show of party unity on Tuesday, Johnson and Hunt sat next to each other as the tally was read aloud, shaking hands as Johnson's victory became clear. Hunt was among the first in the room to stand and applaud the U.K.'s incoming leader.

May swiftly congratulated Johnson, saying he had her full support "from the back benches" of the party in Parliament.

Nigel Farage, a leader in the push to leave the EU, wished Johnson well. But, he asked, "Does he have the courage to deliver?"

President Trump offered his own congratulatory note on Twitter, saying, "He will be great!"

Minutes after Johnson's win, opposition leader Jeremy Corbyn took to Twitter to say Johnson had won the support of fewer than 100,000 "unrepresentative Conservative Party members" — but not the support of the country. "The people of our country should decide who becomes the Prime Minister in a General Election," Corbyn added.

The U.K.'s next general election is set for 2022, and Johnson vowed to defeat Corbyn, in addition to delivering Brexit and uniting the party and country. "I will work flat out to repay your confidence," he said.

Thank you all for the incredible honour you have done me. The time for campaigning is over and the time for work begins to unite our country and party, deliver Brexit and defeat Corbyn. I will work flat out to repay your confidence

Johnson inherits other dire problems as the next prime minister, including a standoff with Tehran. Last week, Iran seized a British-flagged commercial oil tanker in the Strait of Hormuz. Hunt, the candidate who failed to win his party's endorsement, has said the move was a retaliation for Britain's military helping to seize an Iranian vessel in Gibraltar earlier this month.

When Johnson was the U.K.'s foreign secretary, he also mistakenly gave Iran a reason to continue detaining Nazanin Zaghari-Ratcliffe, a British-Iranian woman jailed in Iran since 2016 on spying charges. In late 2017, Johnson told a U.K. parliamentary committee that Zaghari-Ratcliffe had been teaching journalism there. Johnson later apologized to her family and said she was on vacation, but Iranian state media had already seized on his remarks.

Although Johnson remained the clear favorite up to the moment of voting, an incident occurred last month that left some in doubt about the politician. Police were called to the home of Johnson and his partner, Carrie Symonds, following reports of screaming amid an apparent domestic dispute.

Days later, a photo emerged of the couple in a garden, holding hands and smiling in what critics said was a ham-fisted effort by the campaign to tamp down the incident. Some on social media also pointed out that the photo appeared to be old, as the length and color of Johnson's famously tousled hair did not match his current style.

In the weeks since, Johnson has dodged questions about the photo's authenticity. Symonds is a former Conservative Party communications director.