Accessibility links
SNAP Benefits: Trump Administration Wants To Change Who Qualifies The administration wants to close what it calls a "loophole" that allows states to give benefits to those who would not otherwise be eligible by raising or eliminating income and asset limits. 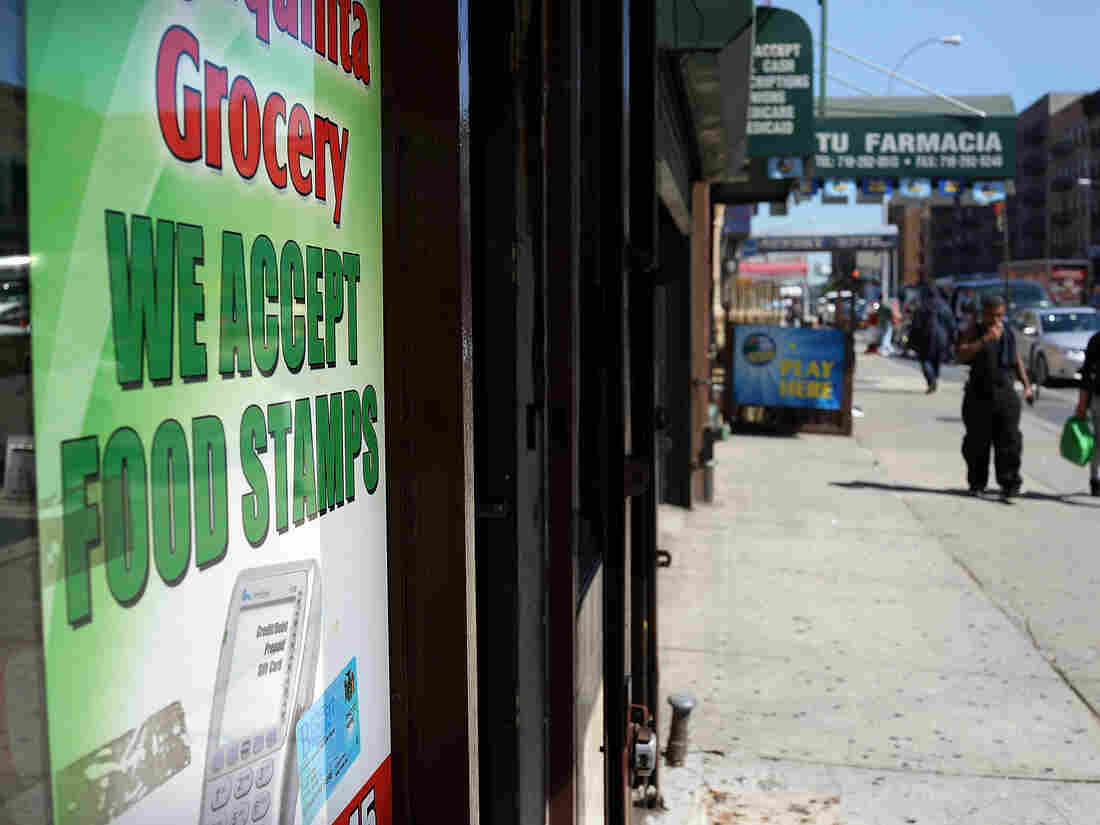 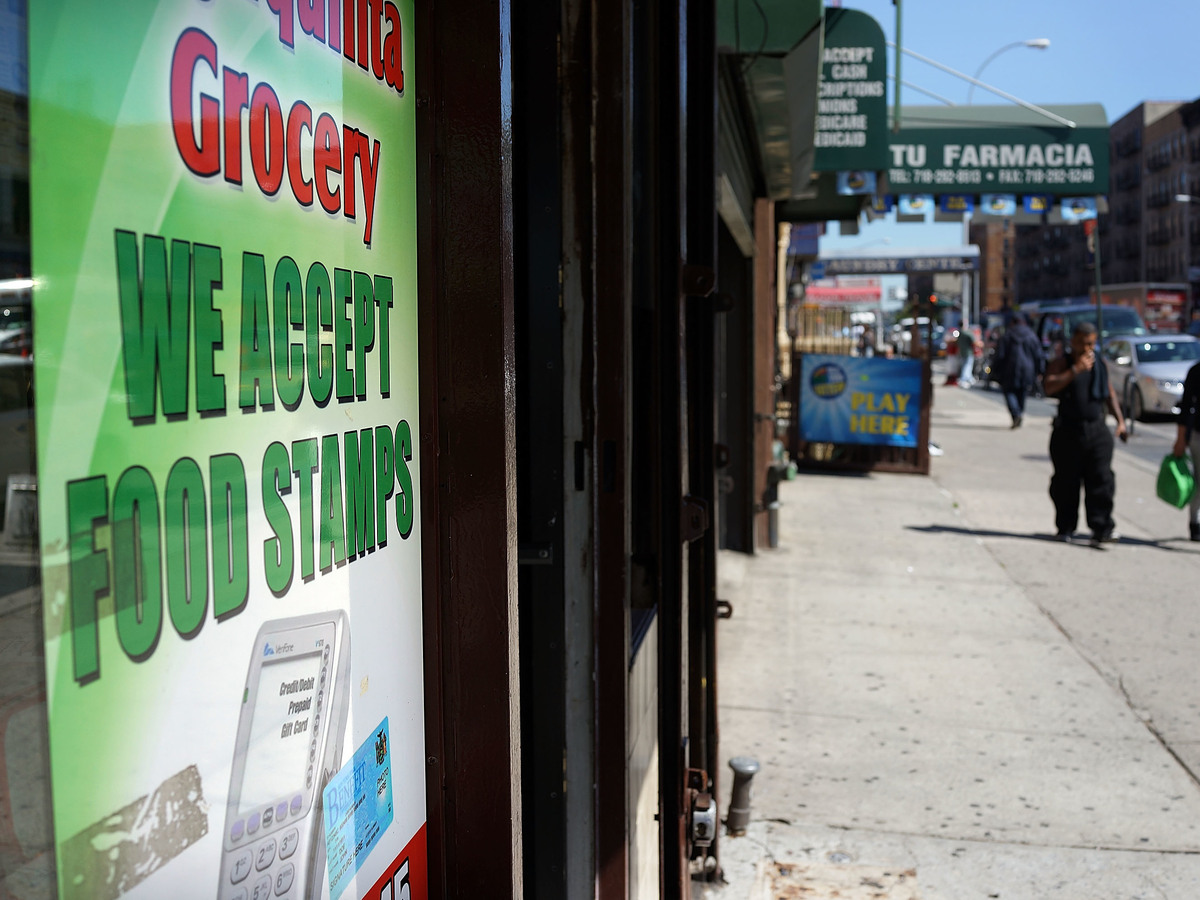 A grocery store in New York City advertises that it accepts food stamps. A Trump administration proposal could result in 3 million people losing their food assistance.

The Trump administration wants to change the way states determine who qualifies for Supplemental Nutrition Assistance Program, or SNAP, benefits, also known as food stamps. The U.S. Department of Agriculture estimates that 3 million people would lose their food assistance as a result.

The administration says it wants to close what it calls a "loophole" that allows states to give benefits to those who would not otherwise be eligible by raising or eliminating income and asset limits. Forty states and Washington, D.C., now take advantage of this option and have done so for many years.

"This proposal will not only save money, but more importantly it preserves the integrity of the program while ensuring nutrition assistance programs serve those most in need," Agriculture Secretary Sonny Perdue said in announcing the proposed rule, published in the Federal Register. His agency estimates the change would likely save $2.5 billion a year.

But proponents of the current system say it helps low-income families who work but have huge child care, housing and other expenses that leave them with insufficient money to buy food. States now have the flexibility to not cut off benefits as soon as a family's gross income exceeds a certain level, but to more slowly phase out the food aid. The current program also automatically qualifies 265,000 schoolchildren for free lunches. Under the administration's proposal, those children would have to apply separately to continue to get those meals.

"This rule would take food away from families, prevent children from getting school meals, and make it harder for states to administer food assistance," said Sen. Debbie Stabenow of Michigan, the ranking member on the Senate Agriculture Committee. Stabenow noted that Congress refused to include the proposal in last year's farm bill.

"This proposal is yet another attempt by this administration to circumvent Congress and make harmful changes to nutrition assistance that have been repeatedly rejected on a bipartisan basis," she said.

The proposed rule change is one of several the administration has made or is considering that restricts safety net programs for low-income individuals and families.

The public has 60 days to comment on the proposal and opposition is expected to be fierce. Anti-poverty groups see it as part of a much broader campaign by the Trump administration to push people off government aid even as they continue to face financial struggles. The change would likely face a legal challenge if it goes into effect.

Right now, the law sets a gross income cap of 130% of the poverty line for SNAP recipients — about $33,000 for a family of four. But states use something called "broad-based categorical eligibility" to allow families getting other assistance to receive some SNAP benefits even if their incomes are as high as 200% of the poverty level, as long as they have other expenses that cut their net incomes below a certain level. States like the option because it gives them more flexibility to help families that have fluctuating incomes and still have trouble buying food.

"These are working families who are just above SNAP's income cutoff," said Stacy Dean, vice president for food assistance policy at the left-leaning Center on Budget and Policy Priorities. "What the [current system] does is say to workers that if you want to work a few more hours, you don't risk losing SNAP because you take the extra shift. So it's promoting work."

Dean notes that the change would also eliminate benefits for many seniors and individuals with disabilities who would be cut off if their assets exceed $3,500. Many states have waived the asset limit because they argue that it discourages low-income families from saving, and it's a huge administrative burden trying to keep track of a recipient's bank account and other assets.

Using Food Stamps For Online Grocery Shopping Is Getting Easier

But that has also led to one high-profile case that the administration and some Republicans repeatedly tout as evidence that the program needs to be fixed. The case involves a wealthy Minnesota man who had extremely low income, but huge assets, and said he applied for and collected SNAP to show that the program is flawed. Dean and others counter that the man intentionally abused the system and that it is highly unusual for someone with so many assets to have so little income, which includes interest on savings and investments.

Perdue called SNAP a "temporary safety net" and said the administration wants to help people "move away from SNAP dependency."

About 36 million people now receive monthly SNAP benefits. That number has declined steadily since 2013, when it exceeded 47 million.