Accessibility links
Tinariwen Threatened Ahead Of North Carolina Concert Date The band of Tuareg guitarists — who have faced down Islamic extremism at home in Mali — are receiving violent threats and racist responses to a scheduled concert in North Carolina in September. 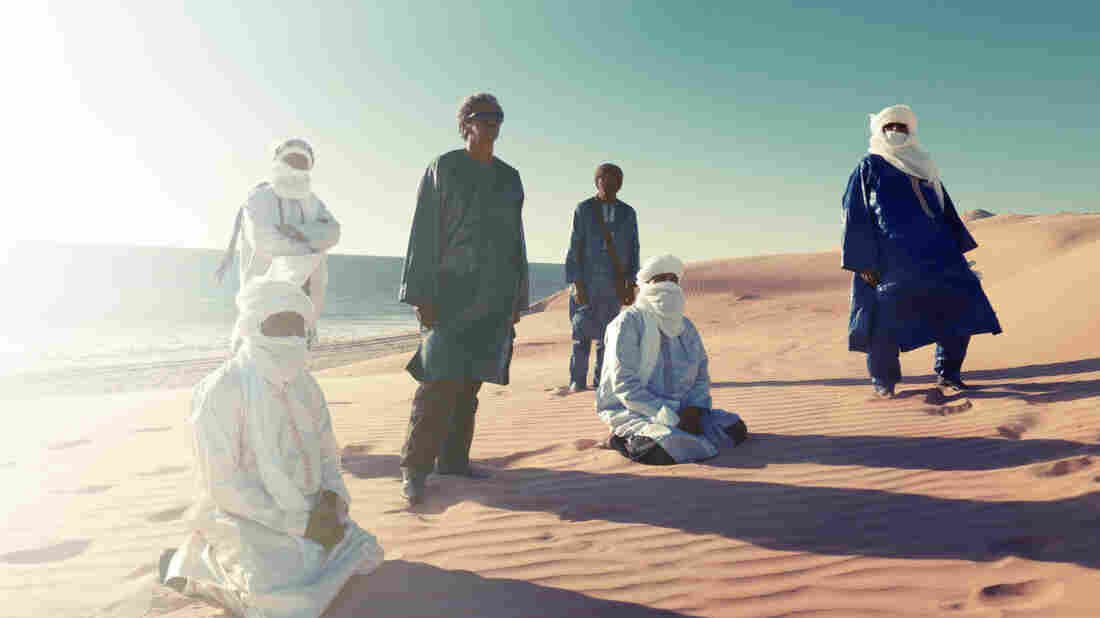 Ahead of a September tour date in Winston-Salem, N.C., social media commenters are leveling violent, racist attacks against the Tuareg musicians known as Tinariwen. Marie Planeille/Courtesy of the artist hide caption 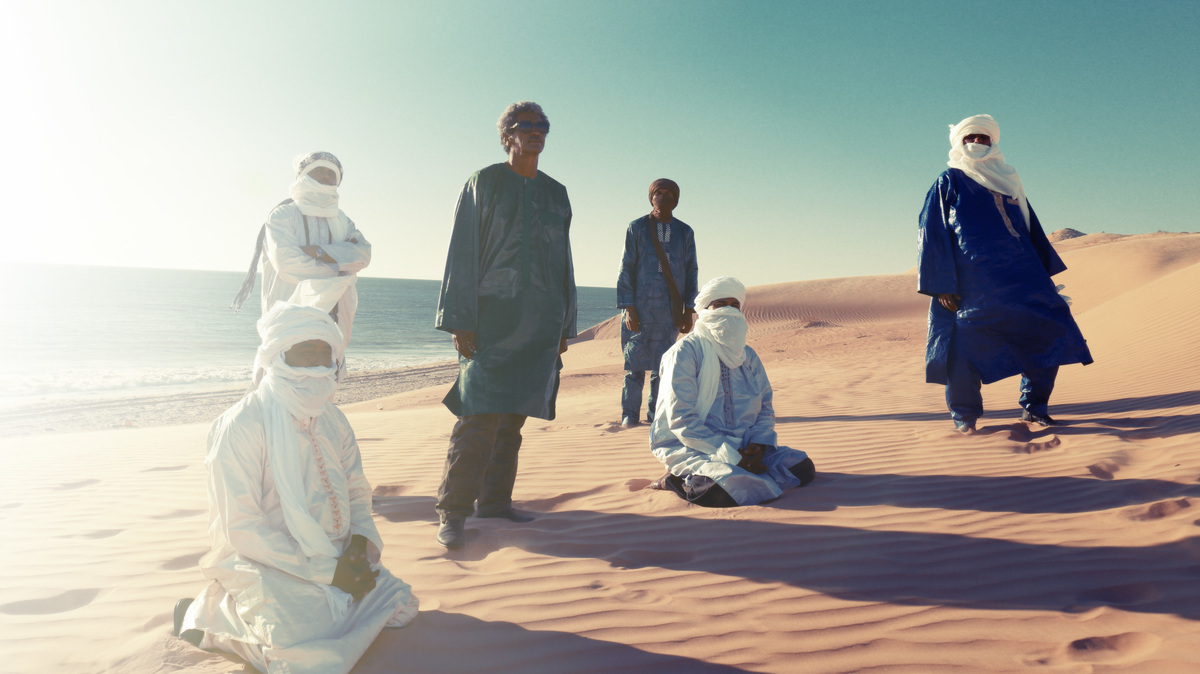 Ahead of a September tour date in Winston-Salem, N.C., social media commenters are leveling violent, racist attacks against the Tuareg musicians known as Tinariwen.

Marie Planeille/Courtesy of the artist

A guitar band from Mali called Tinariwen is famous worldwide. The group's fans and collaborators have included Robert Plant, Thom Yorke of Radiohead, Bono of U2 and Nels Cline of Wilco. The band has fought extremism in their home country of Mali, and been victims themselves. But ahead of a September show in Winston-Salem, N.C., social media commenters are leveling violent, racist attacks against the musicians.

A refresher on Tinariwen: This a group of Tuareg musicians from the north of Mali. The members have been hailed as guitar gods, playing rolling melodic lines and loping rhythms that evoke the desert sands of the Sahara — the band's native home. The band's name literally means "deserts" in their language, Tamasheq.

The first time I saw them play was in Mali, back when it was a safer country than it is today — it was a life-transforming experience. In January 2003, I was lucky enough to travel to see them play at the Festival in the Desert, at a Saharan oasis called Essakane — that's about 40 miles outside of Timbuktu, to give you a sense of its remoteness. To get there, we drove, off-road, in ramshackle Toyota Land Cruisers over constantly shifting sands.

The stage for the three-day event was set up amidst the desert dunes; we slept in simple tents as Tuareg nomads pitched their tents and camels nearby. (The festival, which was founded in 2001, was built upon a traditional Tuareg festival — a time for nomadic Tuareg to get together, make community decisions, race camels, make music, recite poetry and dance.) There were a few dozen foreigners — Brits, Europeans and Americans, like myself — among hundreds of Tuaregs and their camels.

The hope for a larger Festival in the Desert was that it could serve as an economic engine and encourage cultural tourism to northern Mali, a region that has often struggled, and to show cultural unity among Mali's richly diverse peoples, in the years after the country suffered terrible and bloody conflict in the 1990s. To that end, the organizers invited some incredible Malian musicians who weren't Tuareg to perform — artists like Ali Farka Touré and Oumou Sangare — along with Robert Plant. The 2003 Festival in the Desert became legendary — and it spurred Tinariwen to worldwide success.

But the Festival in the Desert didn't last. The political situation in Mali grew more precarious, and by 2012, Islamist extremists — many of them foreigners — fanned out across northern Mali, in hopes of gaining control. Musicians became a prime target. The Festival in the Desert went into exile, and transformed by necessity into an international touring collective.

One of Tinariwen's own members, the vocalist Intidao (born Abdallah Ag Lamida), was kidnapped by one of those extremist groups, Ansar Dine, in early 2013. Fortunately, he was released. But like many musicians from Mali, Tinariwen has rebuked fundamentalism, and they persevered largely by recording and touring extensively abroad.

Latitudes: The Film 'The Last Song Before The War'

Fast-forward to this week. The band is touring the U.S. in September and October to support a new album. A club in Winston-Salem, called The Ramkat booked a show with them for Sept. 17. The venue's owners put up an ad on Facebook for the show and in response, they started getting a number of racist, vitriolic comments and even violent threats against Tinariwen. (The situation was amplified by the local alternative newspaper, the Triad City Beat, which posted a report on July 19.)

Andy Tennille, one of The Ramkat's owners, told NPR on Tuesday that he found the comments "highly disturbing, hateful, and sad — very sad."

He continued: "If any of these commenters had done any sort of homework on the band, the Tuareg people or their history, they'd find that the band and the Tuareg people have been marginalized their entire lives — and that Tinariwen themselves have stood up to some of these kind of hateful and and racist forces in North[western] Africa. It's incredibly disappointing, and then probably the most disappointing thing of all is the fact that we're talking about these misguided commenters, and what we're not talking about is what an incredible band Tinariwen is."

Tennille says that he and the other owners have been heartened by positive comments and ticket purchases, however, in the aftermath of the waves of racist and xenophobic comments. Even so, they're planning to increase security measures on the night of Tinariwen's show.

Previous audio and Web versions of this story misstated the name of one of The Ramkat's owners. His name is Andy Tennille, not Andy Neville.