Accessibility links
Spoon's 'Everything Hits': What's The Role Of A Greatest Hits Album In 2019? After nine albums, the veteran indie rock band Spoon is doing something that's become a rarity in the age of playlists: releasing a hand-picked collection of a dozen of its best-loved songs. 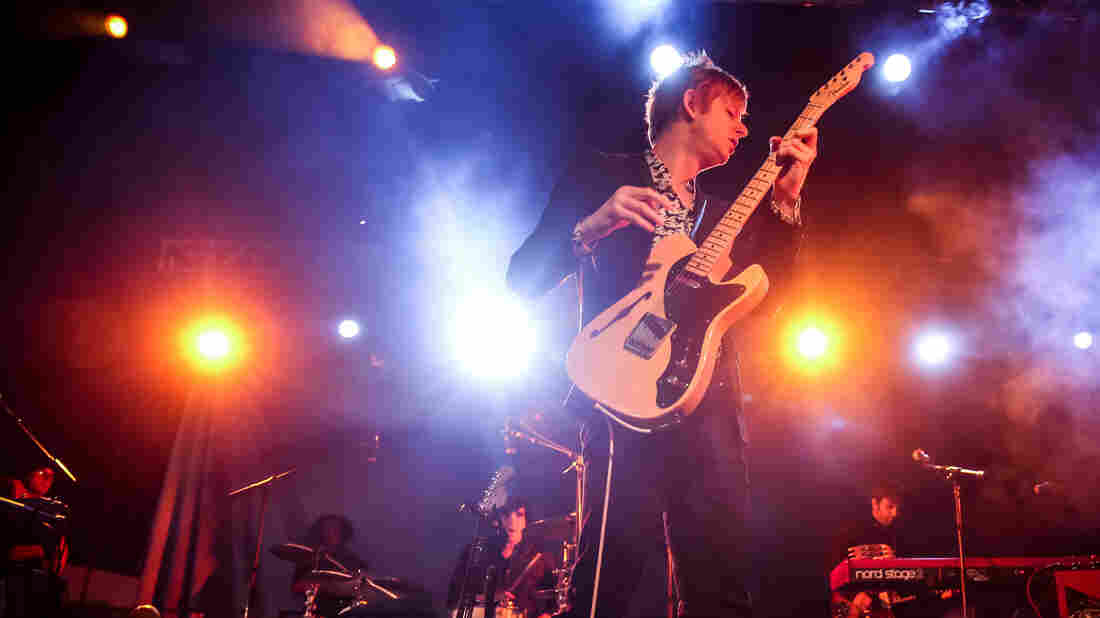 "We wanted to do a record for the people who don't know the band as well," says Spoon singer Britt Daniel (center) of the reasoning behind its new greatest hits album, Everything Hits At Once. Chelsea Lauren/Getty Images hide caption 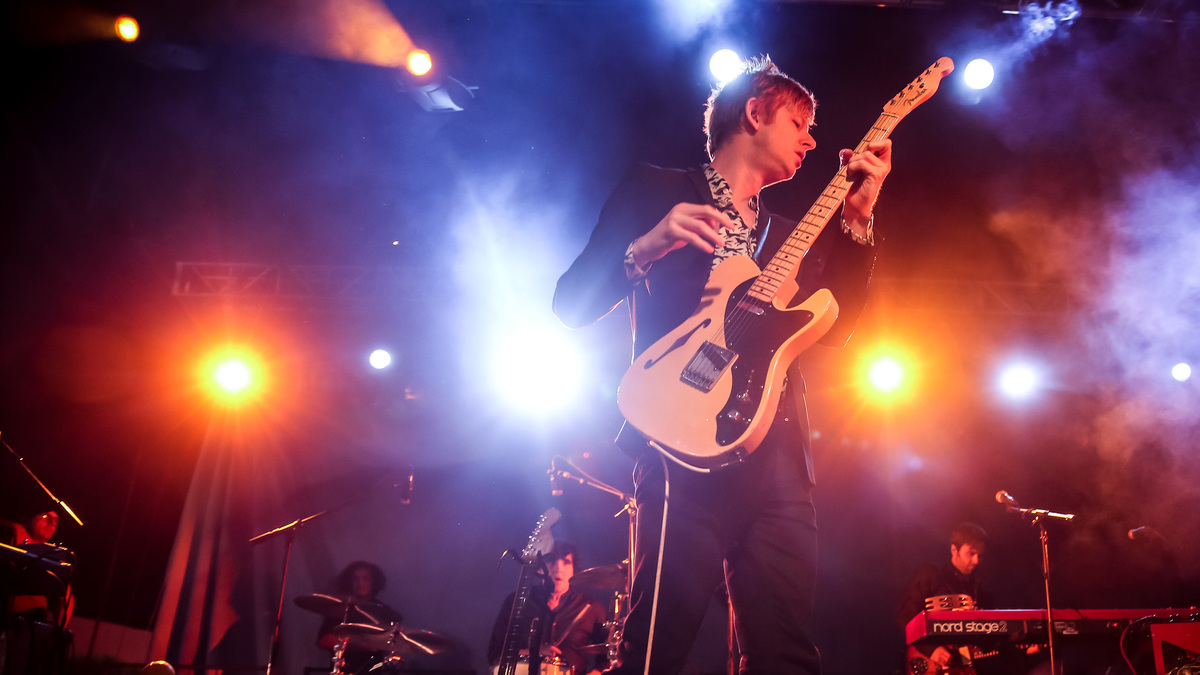 "We wanted to do a record for the people who don't know the band as well," says Spoon singer Britt Daniel (center) of the reasoning behind its new greatest hits album, Everything Hits At Once.

If your formative years as a music listener fall somewhere between the moon landing and 9/11, the odds are pretty good that a lot of the earliest records you fell in love with weren't albums at all, but rather greatest hits collections. There's a good chance they weren't records you sought out yourself, but were in rotation in your family's cars — maybe the color-coded Beatles singles collections, or Stevie Wonder's Song Review, or The Eagles' Greatest Hits, which happens to be the best-selling album of all time, just ahead of Michael Jackson's Thriller. The golden age of the greatest hits record may be in the past, but its functions — to introduce a veteran act to new listeners and to allow an artist to make a case for their own legacy — are arguably more necessary than ever given the sheer volume of music that is available to young listeners.

Unlike proper albums, which typically have some measure of artistic pretense about them, a greatest hits compilation exists purely as a commercial proposition: all the hits in one place, perfect for casual listeners and newbies. The worst of them feel like hastily tossed-together cash grabs, but the best are so well curated in presenting a fertile period of a career that they are arguably an artist's definitive work — Madonna's The Immaculate Collection, Bob Marley and the Wailers' Legend, Squeeze's Singles 45's & Under, ABBA's Gold and Tom Petty and the Heartbreakers' Greatest Hits all immediately come to mind. The format is a gift to artists who are better at producing singles than coherent album statements, and for cash-strapped consumers who can't go from zero to completist for any given pop star who sparks their interest.

But as with most anything in the music industry in this era, technology has robbed a once-familiar and successful commercial tactic of some of its logic and financial benefit. The practical value of a hits disc is greatly diminished in a time when the barrier for entry into any act's catalog is as low as simply typing names and titles into search engines on massively popular streaming platforms like Spotify, Apple Music and YouTube. The very notion of buying physical copies of records is increasingly quaint and romantic, so it makes some sense for the concept of the greatest hits record to shift from commercial interests to contributing to a larger tradition in music culture.

Everything Hits At Once, the new compilation by the venerable indie rock band Spoon, embraces the classic pre-CD model of a hits record, and could be a test case for what these collections could mean in the digital era. It distills the band's large, critically acclaimed body of work down to a tight 13 tracks, including one new single, "No Bullets Spent." Fans of the band will no doubt look over the track listing and wonder where some of their favorites are — "Sister Jack," "Jonathon Fisk," "Written In Reverse" and "Anything You Want" didn't make the cut — but the set inarguably presents a concise and convincing argument for Spoon being one of their era's most distinctive and consistently excellent rock bands.

The record is intended in part as a tribute to the formative compilation of songwriter Britt Daniel's youth. "The very first Cure record I ever bought was Standing On A Beach, which was their greatest hits at the time — it came out between Head on the Door and Kiss Me Kiss Me Kiss Me," says Daniel. "I love that record and still listen to it all the time. It was the same thing with New Order's Substance. I think these records can be a thing unto itself."

The record also exists as a way of giving fans an entry point into a catalog with so many beloved albums that the band's incredible consistency is something of a commercial liability: It's hard to know where to jump in. Spoon is also a band whose best-known tracks aren't mainstream pop hits so much as songs that are out in the world without a lot of context. You hear them in TV shows and movies, or in bars, cafes and shops. Their best-known songs, like "I Turn My Camera On" and "Don't You Evah," nudge familiar classic rock sounds into odd grooves, and contrast tight pocket rhythms with surprising textures and moments of musical chaos. Their songs always have a strong atmosphere, but are too intriguing and ear-catching to fully dissolve into the background. It's the sort of music that gets Shazam'd a lot.

This factored heavily into the band's motivation to make the compilation. "The band and their manager John Silva had the idea," says Gerard Cosloy, co-owner of the band's label, Matador Records. "John in particular noted that Spoon have a plethora of amazing songs in their catalog that casual listeners might've heard in passing without knowing specifically who was responsible."

The record was initially conceived as a more elaborate multi-disc compilation before the band made the call to pare it down to a single vinyl record. The earliest part of that process called for Daniel listening to every Spoon record in full for the first time in years, starting with 1998's Telephono. "I'd listen to one album a night and, you know, just kind of jotted down notes," Daniel says. "Before I knew it, it was a two or three disc set, and it was a really good three disc set!"

"We talked about that for a bit and thought maybe we'd do that for a compilation in the future, and have it be something where we can get into rarities and unreleased tracks," he says. "But for now we wanted to do a record for the people who don't know the band as well, to make it more of an introduction."

"We ended up picking songs that we felt were essential and the best ones, but it was hard to narrow it down," Daniels says of the editing process, noting that some of his personal favorites had to be cut for time, and to place an emphasis on accessibility. Some of the band's most brilliant moments are in songs that are a bit too epic or moody for casual listening. "You know, "My Mathematical Mind" was one where, when we play it live it's one of our best songs, but it just didn't fit in. It didn't make sense."

The set also omits songs from Spoon's first two records, though that wasn't an intentional snub of their earlier work. "Songs from A Series of Sneaks were there on the earlier version of the album that I mentioned," Daniel says. "But it didn't seem like that was what best represented us, and who we've been, and who were are going forward."

Officially released greatest hits albums tend to be among the most-played records by many artists, and while Spotify and Apple still curate introductory playlists for those acts (Spotify calls their Spoon playlist "This Is: Spoon"; Apple named theirs "Spoon Essentials"), their own collections thrive when an artist hasn't gotten around to making and marketing one for themselves. "Where we see the most engagement with fans around Essentials is with artists that are extremely popular and don't have a compilation of studio hits," a representative for Apple says of their curation efforts. "For example, Essentials playlists for artists like Bad Bunny, Post Malone, Drake, Ed Sheeran, Billie Eilish, Cardi B, Ariana, Khalid, Luke Bryan, Shawn Mendes are frequently in our top 20." In other words, mostly artists who have been native to streaming services for their entire career, and in some ways are producing and releasing new material as if they're deliberately making a hits playlist in real time.

Whereas a traditional compilation like Spoon's Everything Hits At Once is built around the constraints of physical media, to represent the artist's view of their own catalog, the curation at a streaming services allows for a more expansive and dynamic approach. Apple in particular emphasizes an artist's most recent material, and selects catalog tracks based on what they say is a "mix of popularity and credibility" designed to appeal to both casual listeners and hardcore fans. "It's based on both quantitative data like streaming numbers, chart positions, radio airplay and presence in live sets and qualitative choices, particularly if a song has become a fan favorite over time," the Apple representative says.

Spoon didn't approach Everything Hits At Once with a data-driven mindset, but one song, "Inside Out," was included partly because the band knew that was their most popular song on streaming platforms. "It wasn't a radio song, it wasn't the lead track for that record," Daniel says of the song, which was originally featured on the band's 2014 record They Want My Soul. "I kind of love that it's this song that people just kind of found and connected, but I'm not sure how it got that way," says Daniel. "My impression was just that it was the coolest song on the record, and when I finished that record I'd play it for people and they'd be knocked out. People just gravitate to it."

Daniel isn't terribly concerned about competing with Spotify and Apple's curation of his body of work. "I know they make those playlists, but it's not what we're doing here. We wanted to make a band-curated product," he says. "It's an old school record release."

In other words, the record is really intended for people perusing bins at a record store, or for the people checking out the merch booth while Spoon tours with Beck and Cage the Elephant this summer. The album is being sold at a discount price point — as of right now, the CD is $7.49 and the LP is $11.24 in the Matador Records online store. The entire endeavor taps into the purest spirit of the greatest hits disc. It's designed for that sort of "why not?" purchase, and the song selection is a smooth entry point to a large, highly rewarding catalog. And in the case of the digital realm, the odds are good that it'll be the first place curious listeners go when they type "Spoon" into a search box going forward. It's too early to say whether Everything Hits At Once will end up being like Standing On A Beach for some kid today, but Spoon has certainly put in the thought and effort to make that a good possibility.

It's hard to narrow a catalog as deep as Spoon's down to just 12 songs, so Matthew Perpetua has picked another dozen. Listen to them here.