Listen · 7:01 7:01
This Supreme Court Case Made School District Lines A Tool For Segregation 7:01 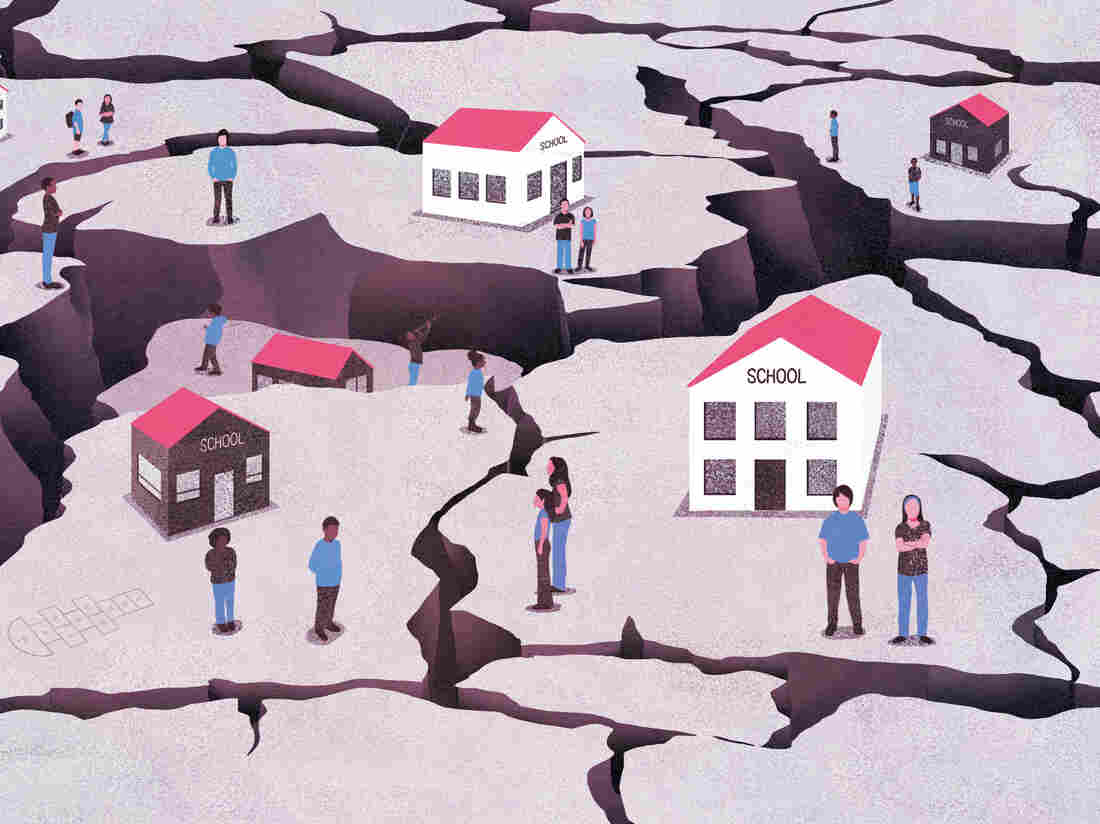 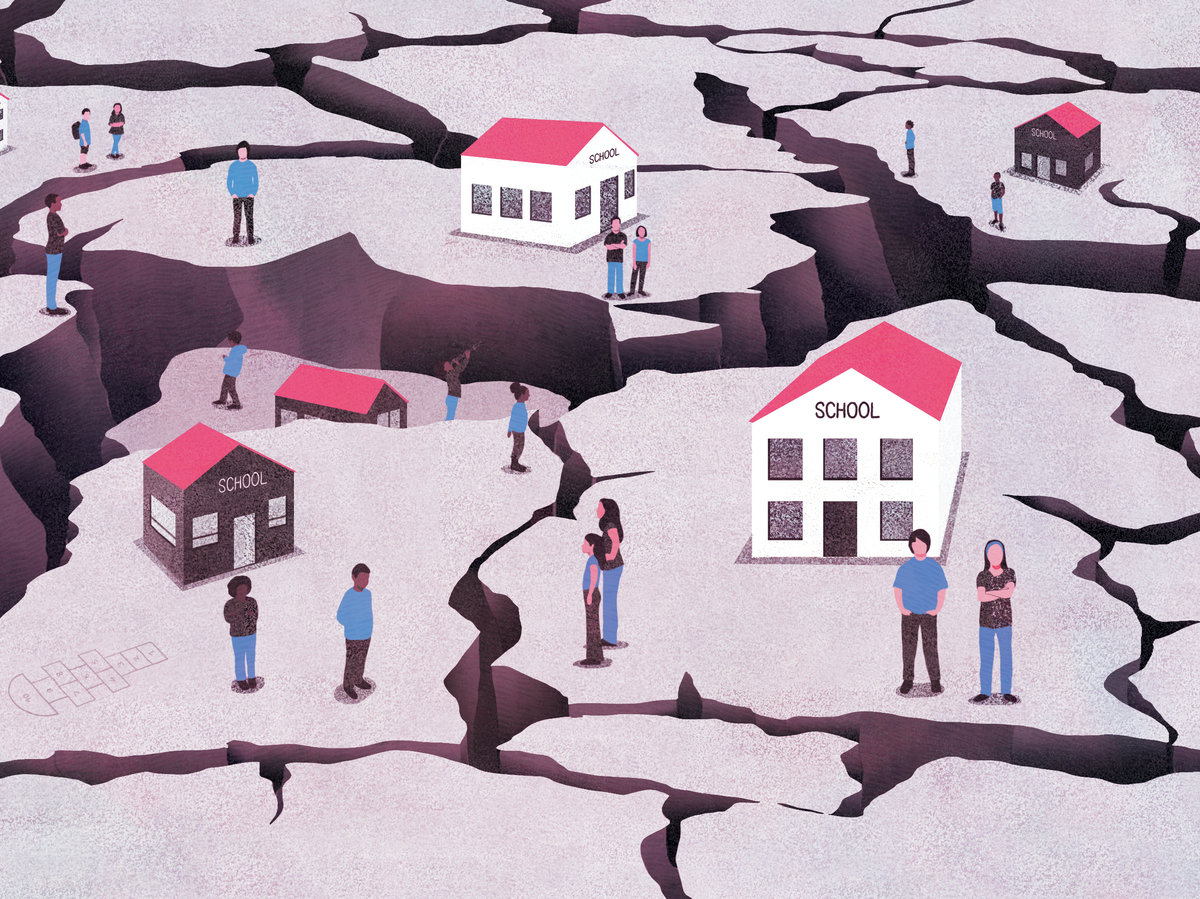 Roughly 9 million children — nearly 1 in 5 public school students in the U.S. — attend schools that are racially isolated and receive far less money than schools just a few miles away. That's according to a sweeping new review of the nation's most divisive school district borders from EdBuild, a nonprofit that investigates school funding inequities.

"Inequality is endemic" in America's public schools, the report says, identifying nearly 1,000 school district borders where schools on one side receive at least 10% less money per student than schools on the other side and where the racial makeup of the two sides' students varies by 25 percentage points or more. It is the story of segregation, in 2019.

EdBuild says the disadvantaged districts in these cross-district comparisons receive, on average, about $4,200 less per student than their wealthier neighbors, largely because of differences in what they're able to raise through local property taxes. To put that gap into perspective, schools spent an average of $12,000 per student in 2017, according to the U.S. Census Bureau. This means that disadvantaged districts have about one-third fewer dollars per student than their peers up the street.

Imagine you're a principal with one-third less funding to pay for teachers, textbooks, buses and counselors.

Now imagine you're a child living at the center of that inequity.

"You know it as soon as you look at the school. You know it the minute you walk into a classroom," says Rebecca Sibilia, EdBuild's founder and CEO, of these funding differences. "There are kids who see this every day, and they understand."

They understand, Sibilia says, that the scales are tipped against them. Their schools are still segregated and underfunded more than 60 years after the Supreme Court issued one of its most famous rulings, in Brown v. Board of Education, unanimously declaring that separate but equal schools are neither equal nor constitutional. So why are so many U.S. schools still so separate and unequal?

"That's all thanks to Milliken," Sibilia says.

"No hope of achieving actual desegregation" 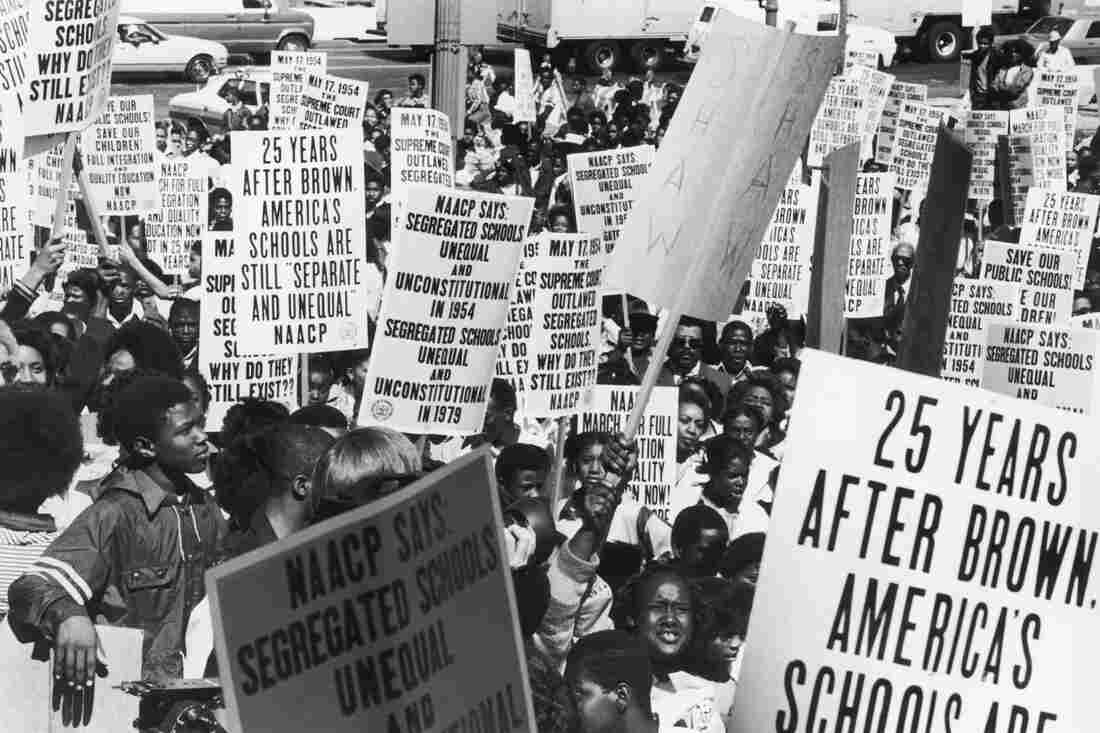 EdBuild timed the release of its report to coincide with the 45th anniversary of another Supreme Court ruling, one not nearly as well-known as Brown but a case that has had just as much impact: Milliken v. Bradley. This case posed an essential question in 1974: Who should be responsible for desegregating America's schools?

The case arrived two decades after Brown began the push for school desegregation. In those intervening years, the federal government achieved meaningful progress in the South, and the movement ultimately worked its way north, to cities like Detroit. But many white voters grew anxious, even angry, about these efforts. 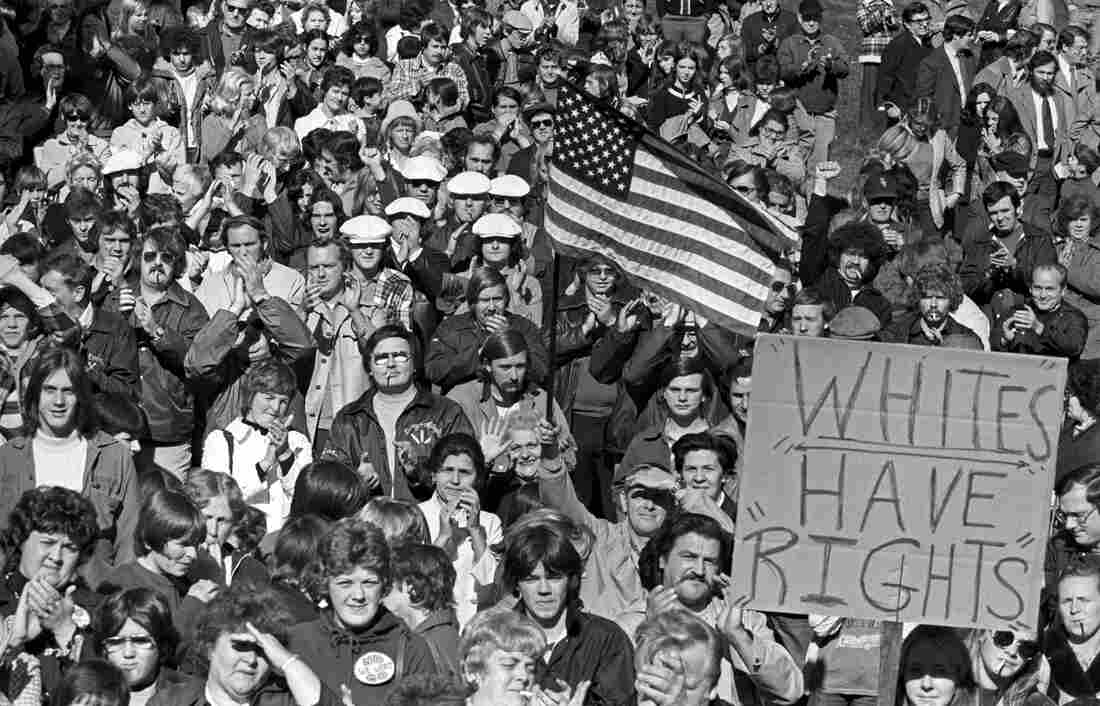 That anger helped propel Richard Nixon to the White House in 1969. In just a few years, he filled not one but four vacancies on the Supreme Court. And it was this new court that would hear oral arguments in Milliken.

Leaders from the state of Michigan and the city of Detroit had been sued for policies that had helped segregate Detroit's schools. At the time, two-thirds of students there were African American, while growing suburbs were almost exclusively white.

The plaintiffs argued that school policies reinforced racist housing practices that had trapped black families inside the city. It was a story playing out across the United States.

"The story was the story of American apartheid," says Michelle Adams, a professor at Cardozo School of Law in New York City. She's writing a book on Milliken and says federal redlining of neighborhoods and race-based restrictions on house sales, known as covenants, had made it nearly impossible for black families to move to the suburbs.

While black parents had been contained by racist housing policies, their children were being contained by school district lines. The state was pouring money into new suburban schools but was building them behind district lines that acted like fences. A lower court judge ruled that the only way to meaningfully desegregate Detroit was to tear down those lines — those fences — and to bus students between the city and 53 suburban school districts. The suburbs fought that ruling in the Supreme Court.

"There is no evidence in this case that any school district in the state of Michigan, including Detroit, was established or created for the purpose of fostering racial segregation in the public schools," said attorney William M. Saxton in oral arguments on Feb. 27, 1974.

The suburban districts did not deny that their schools — and Detroit's — were segregated. But, they countered, that segregation was not the result of discrimination. It was not intentional.

"[The suburbs were] making this issue a question of white guilt or innocence," says Elise Boddie, a professor at Rutgers Law School. She says they were essentially saying: "We know there may be a problem of segregation, but it's not our fault. We're not responsible for it."

Unless our children begin to learn together, there is little hope that our people will ever learn to live together and understand each other.

The fight in Milliken was over who was responsible. Because the state had opposed an earlier desegregation effort, it seemed liable. But what about those dozens of booming, largely white suburbs? Should the federal courts do as they had done in the South for years: step in and force these communities to share their schools with black children?

The suburbs argued that their school district lines had been drawn without malice and that the federal courts had no right to interfere in the local control of schools unless the black parents who brought the case could show that the suburbs were responsible for school segregation in Detroit.

A divided court agreed, finding in a 5-4 ruling that if these suburbs weren't actively hurting Detroit's students, then they couldn't be forced to help them either. Of the five justices in that majority, four had been appointed by Nixon. Ultimately, Detroit was told to somehow desegregate itself.

An unrealistic demand, said the court's only African American justice:

"The Detroit-only plan simply has no hope of achieving actual desegregation," said Justice Thurgood Marshall in his dissent. "Under such a plan, white and Negro students will not go to school together. Instead, Negro children will continue to attend all-Negro schools. The very evil that Brown was aimed at will not be cured but will be perpetuated."

Marshall knew that because schools are funded through local property taxes, these segregated big-city schools weren't just separate but were also clearly unequal. As an attorney in the early 1950s, Marshall had argued — and won — the historic Brown v. Board case, and he called the Milliken ruling a "giant step backwards."

"Our nation, I fear, will be ill served by the court's refusal to remedy separate and unequal education," Marshall warned, "for unless our children begin to learn together, there is little hope that our people will ever learn to live together and understand each other."

Nearly half a century later, EdBuild's new report affirms Marshall's fear. Milliken established the sacredness of school district lines and severely limited federal courts' ability to change the status quo. Today, Detroit is even more segregated than it was back in 1974. And that's the case not just in Detroit.

On the left, homes in Hempstead Union Free School District on Long Island, N.Y. On the right, a home in nearby Garden City. Elissa Nadworny/NPR hide caption

Often called the first modern suburb in America, Long Island stretches out from New York City, north and east toward the sea, with water on both sides. In between the waves, it's one of the most racially and economically segregated places in the United States.

Nowhere is this more evident than in the school districts that dot the island (there are more than 125 districts). One example of this stark contrast: Hempstead Union Free School District and Garden City Union Free School District. Enrollment in Hempstead's schools is 2% white, while immediately to the north, the school district in Garden City is 87% white, according to the state. You can drive from the high school in Hempstead to the high school in Garden City in about 15 minutes.

Just south of Hempstead's district line is Rockville Centre, another village and yet another school district, where enrollment is 76% white, according to the state.

There's a stark difference in funding too. Compared with schools in Hempstead, Garden City's schools get almost $5,000 more per student per year, and Rockville Centre's schools get about $7,000 more.

"What Long Island shows us is how Milliken has been used to reinforce all of these negative and detrimental policies of the past," explains Sibilia. "What I'm talking about here specifically is housing segregation."

On a drive through Nassau County, it's easy to see what Sibilia means.

"You know immediately when you've left Garden City and you're in Hempstead," explains Elaine Gross, who runs a local nonprofit called Erase Racism. On one side of the line: big houses and tree-lined streets. On the other: laundromats, gas stations and apartment buildings right up against the sidewalks.

Gross says what really astonishes her is the quality of the road between the two communities. On one side, potholes. On the other, "the pavement is just so smooth."

This division, Gross says, "was baked into the beginning of Long Island." This area was once potato fields, but then housing developers arrived and started building homes. Many of those communities sold new homes only to white families, and often restrictions, or covenants, in the deeds kept the discrimination going, saying original owners could resell those houses only to other white people.

"The intention was to forever keep out black people," says Gross. "Talk about a structural impediment. You can't get more obvious than that."

"All of this is very connected. The schools. The housing. The government," says Gross. "All of this is a part of the structural racism which is still very much in place in Long Island."

In most places, states have not been able to make up the difference in that local money, despite decades of funding formulas designed to do just that.

On Long Island, the state of New York does give more money to Hempstead, but it's not enough to make it equal to its neighbors. "In essence," says Sibilia, "states are upholding not just separate school systems but unequal school systems."

"It takes a lot to change the way people think," says Daraeno Ekong, a recent graduate of Hempstead High School. She went to Hempstead's public schools her whole life, and in the fall, she'll start as a freshman at Yale University. This spring, she visited Yale's campus, meeting other students from districts across the country, and in conversation, she picked up that many of them had more resources at their high schools. It's making her a bit nervous, she says, "so I'm kind of finding a way to catch up to them."

The fact that some of these students were also from Long Island but went to very different schools came as a surprise. Ekong says she has never been to any of the schools in Garden City or ever spent time with any of their students.

It's a missed opportunity, she says, for all the students. "They could see from our perspective, and we could see from their eyes," she says. "We might be thinking the same way, or we might do the same thing, you know."