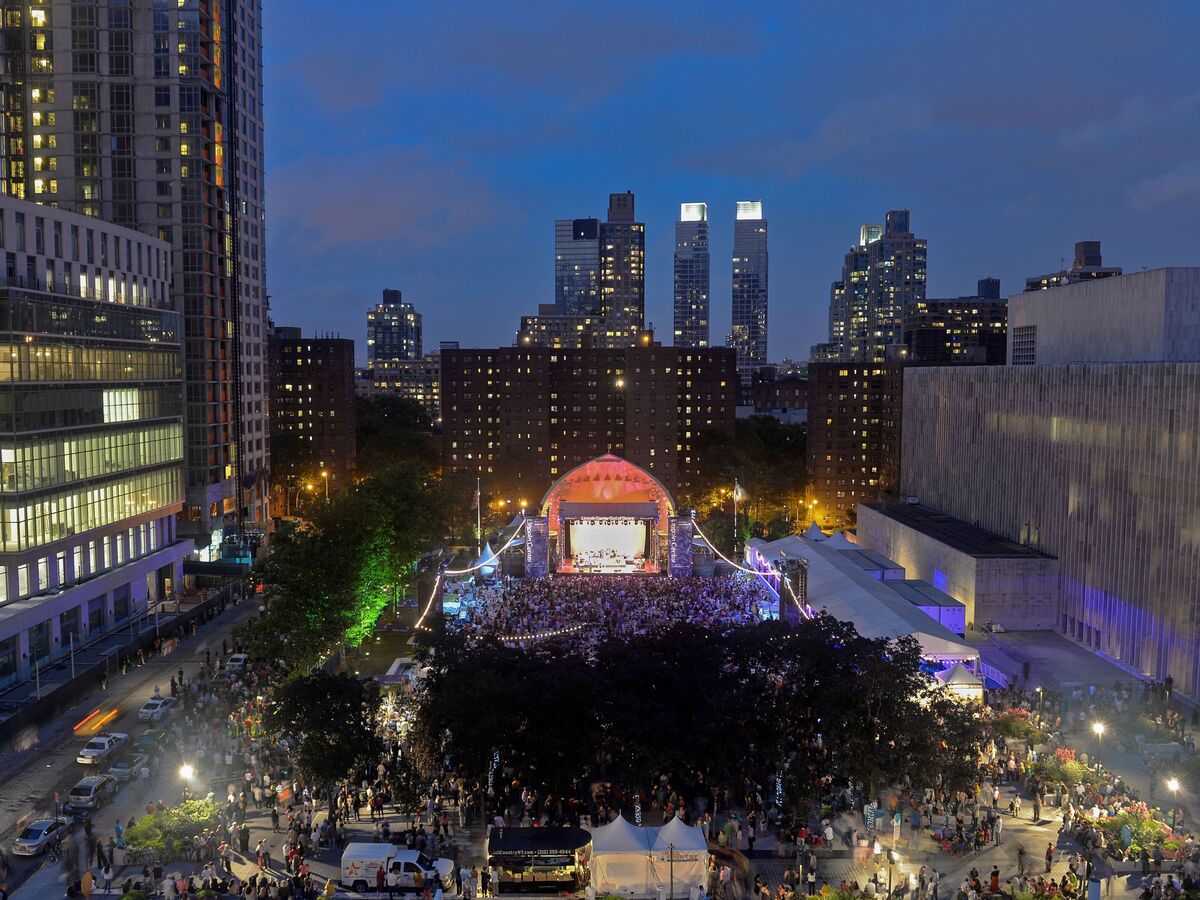 Lincoln Center Out of Doors.

Kevin Yatarola/Lincoln Center Out of Doors

New York City is an expensive place. There's no such thing as a free lunch around here; everything has its cost in one form or another. Any event with an open bar is bound to be an over-packed nightmare, and the sheer mass of the population — literally millions of people in sweaty apartments looking for anything to get them outside — leads to long lines and short tempers. But music lovers know they can find transporting nights of beauty and soul in the best of the summer festivals and concert series that have taken root here. Best of all, a whole lot of it is actually free. 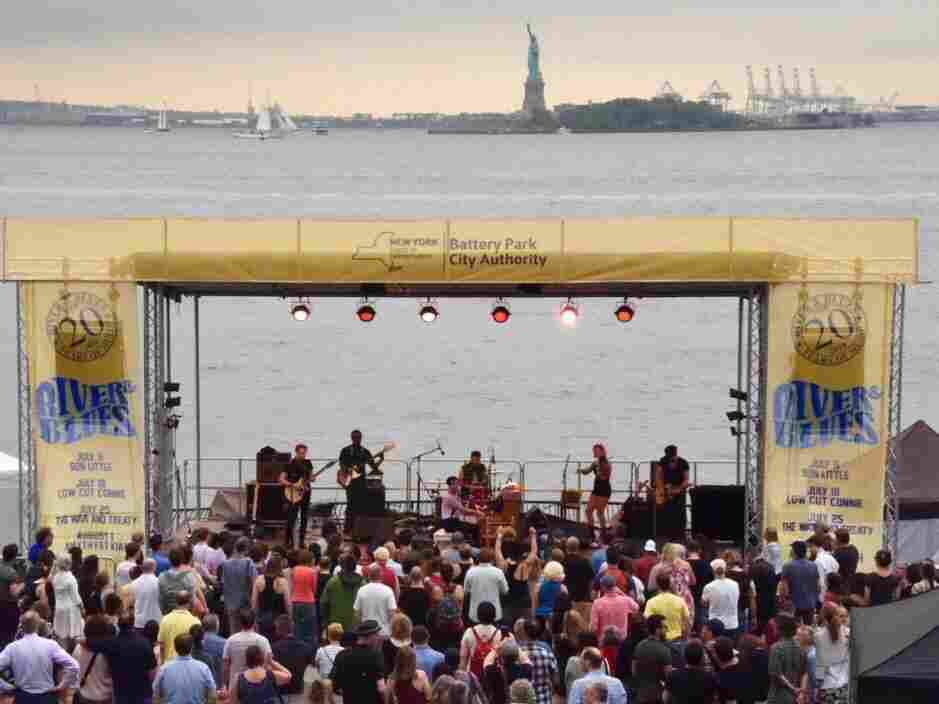 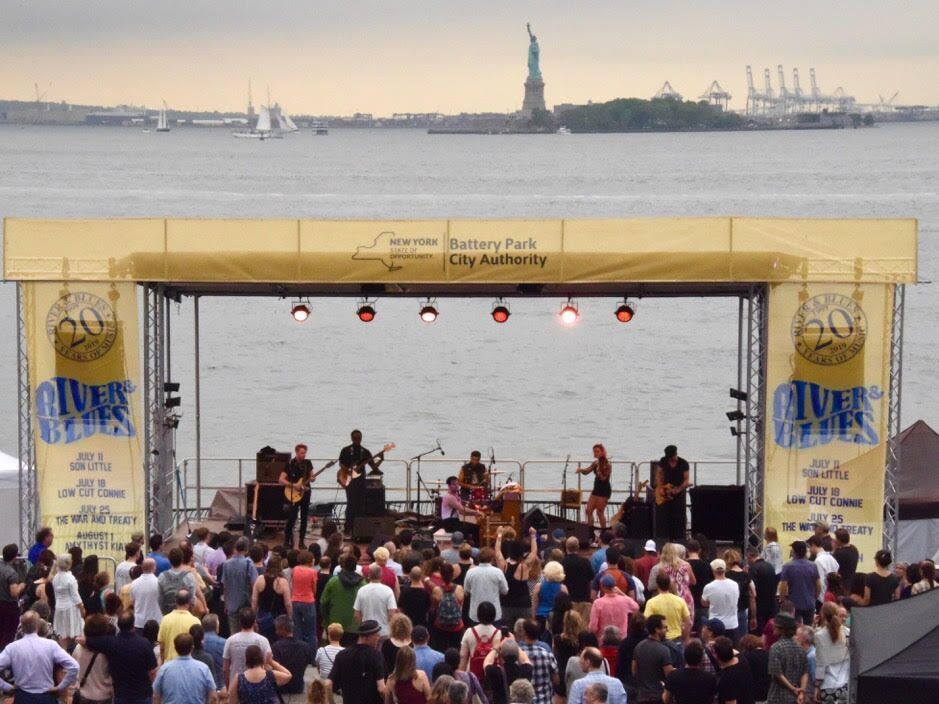 Everyone knows about the big park festivals, but this sweet corner of the city hosts a series of great blues and roots shows every summer on a smaller scale. Wagner Park is at the very southwestern tip of Manhattan, right on the waterfront, with one of the best views in town (say hello to our friend the Statue of Liberty).

Battery Park City isn't like anywhere else in Manhattan; it feels more like a shiny, clean suburb on the Hudson River. Built on a landfill (don't think too much about that), it's got a ton of park space, flowers, walkways and free wifi. The River & Blues concert vibe is to bring a blanket and picnic there for supper, with kids and dogs.

There's a DJ starting at about 6 p.m., the bands start around 7, and make sure you stay for sunset. Your best bet to get in and out is the subway, with several close stops on the 4, 5, R and W lines. If you don't bring your own food, Italian restaurant Gigino even has tables outside. And if you have the afternoon free beforehand, the Museum of Jewish Heritage is in the corner of the same park.

July 25, 2019, 7 p.m.
The War & Treaty
The husband-and-wife duo of Michael and Tanya Trotter have set the public radio listening world on fire this past year. Their shows are exhilarating displays of love, hope and joy.

August 1, 2019, 7 p.m.
Amethyst Kiah
The Tennessee guitarist, banjoist and songwriter is part of the Our Native Daughters project with Rhiannon Giddens, applying her raw vocal power to old-time rock, folk and blues songs. 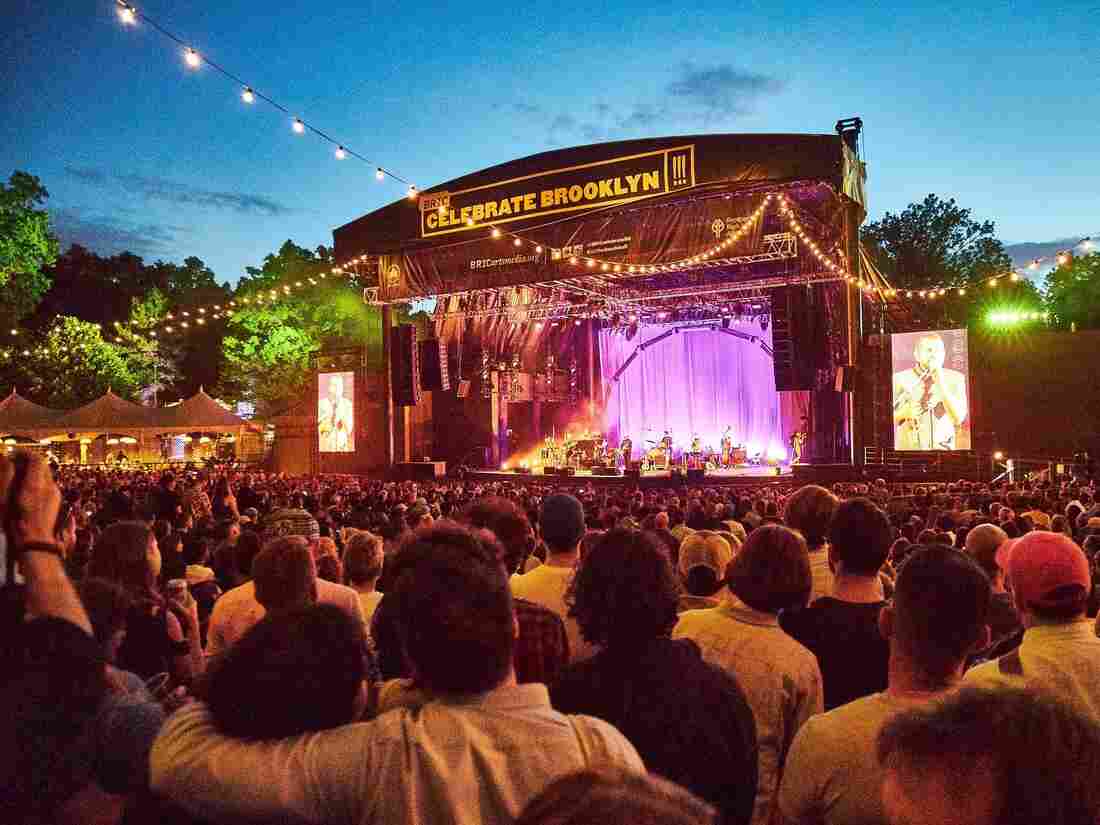 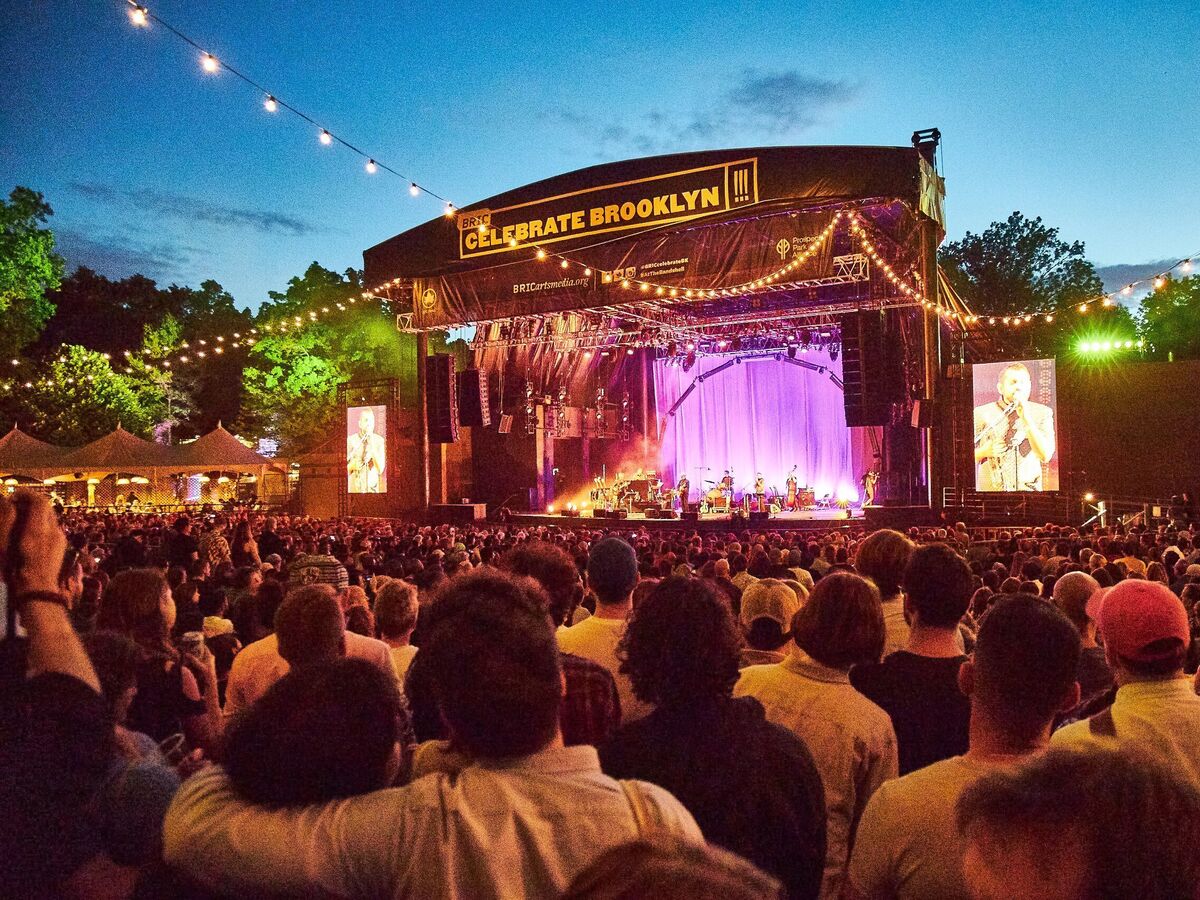 A big player in the summer concert scene, BRIC is a nonprofit organization supporting the arts in various forms. Its Celebrate Brooklyn! Festival series at the Prospect Park Bandshell is its flagship effort, drawing thousands of music fans for both free and ticketed concerts. It's a big night out in a beautiful place — more the kind of event you plan for a friend or date rather than a casual walk through the park to see what's happening.

Shows start at 7:30 p.m.; get there early. The line snakes through the trees, but they keep it moving. There isn't a bad show in the bunch, and you can choose to worm your way up front or hang back on the lawn. There's a decent selection of food and drink (with all new choices this year) and a smattering of local artsy merchant stalls.

Expect a full-stage light show, impeccable sound and serious revelry. The concrete front plaza area fits up to 2,000 people, with another 5,000 on the lawn behind. Shows do reach capacity (more so for the big artists at the paid shows) and it's first-come, first-in. Your best travel bet, as usual, is the subway, on the F/G, 2/3 or Q/S/B lines — their website says, "Please, leave your car at home," though there are a few local lots. There's also a bike-parking tent (bring your own lock).

August 9, 2019, 7:30 p.m.
What's Going On featuring Felicia Collins, Toshi Reagon, Siedah Garrett, Kecia Lewis and others
Marvin Gaye's What's Going On is a cultural touchstone that remains relevant; guitarist and bandleader Felicia Collins gathers an all-star band for a deep dive as they play the record in its entirety.

Notes:
There's a $5 suggested donation for the free shows, which goes to support a great organization. 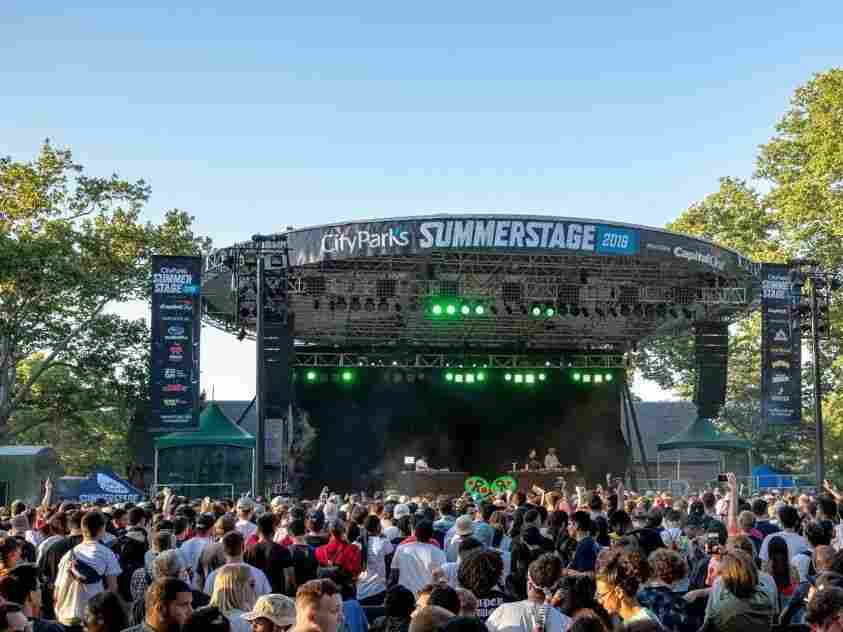 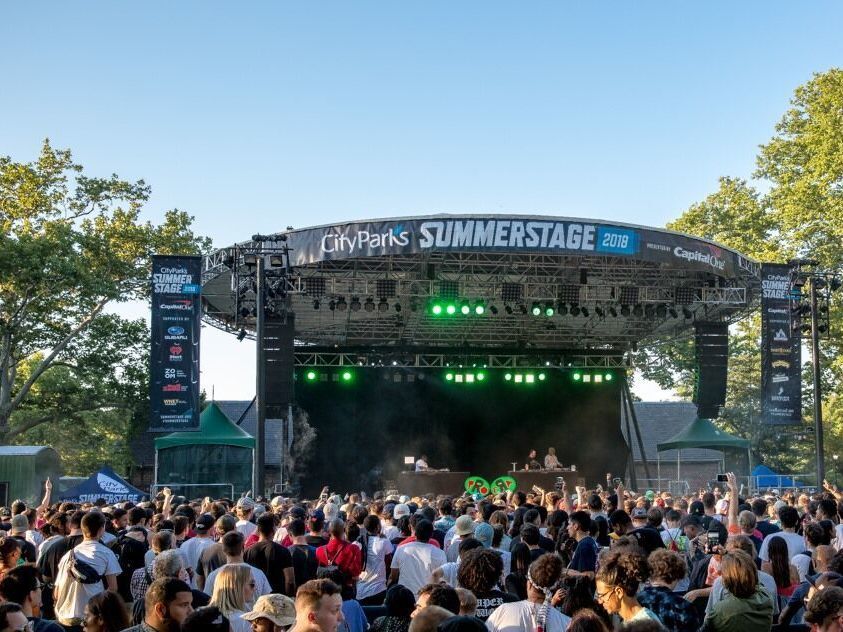 Here's to the efforts of the crack nonprofit City Parks Foundation, which since 1986 has carried the burden and pleasure of maintaining the long and storied history of free live music in New York City's center.

The first free Saturday concert in Central Park was held in 1859; Enrico Caruso drew 50,000 people to a show in 1918. More recently, the Schaefer Music Festival, later the Dr. Pepper Central Park Music Festival, presented free or nearly free shows at Wollman Rink from the late '60s until the '80s, where folks saw everyone from Jimi Hendrix and Led Zeppelin to Ella Fitzgerald. Now, shows are held in 18 parks across the city and the principal spot is Rumsey Playfield, which is so close to the old crumbling bandshell that you can see it from the top of the bleachers.

Rumsey Playfield (near the East 72nd Street entrance) has been the somewhat-rustic setting for Central Park SummerStage since 1990; it just went through a multi-million-dollar makeover for the 2019 season, which brought in a new stage, screens, sound system, lighting and bleachers.

There's something beautiful about live music under the night sky, surrounded by trees that are surrounded by buildings, right in the middle of Manhattan. You're out there in the weather; unless lightning threatens to strike, the show goes on, but a rainy show can be as memorable as a sunny one. The bleachers now have more room, and sometimes there's space to spread out blankets; otherwise you're standing (or dancing) with 5,000 of your friends. Leave your chairs, coolers, strollers, weapons, vapes and selfie sticks at home; there's no bag check.

Doors open one hour prior to the listed showtimes. You can bring food or buy it; a good range of items is available while supplies last, as are adult beverages. Prices are about what you'd expect in NYC, with $14 chicken fingers and $9 beers.

SummerStage signed on with the global initiative Keychange, which asks festivals to pledge to a 50-50 gender balance in their programming; this year, SummerStage has hit that goal.

A big performance with a 10-piece band and nine dancers, featuring members of the original Broadway cast from the Tony Award-winning production Fela!, celebrating the music of Afrobeat founding father Fela Kuti.

SummerStage Coney Island: If you like a coastal setting, Coney Island's Seaside Concert Series has been running since 1978 (with a little financial and legal trouble along the way), and just got an influx of funding that will ensure continued shows through 2025. This season, you can still catch Fela! The Concert on July 26. Also, SummerStage at East River Park presents The Mountain Goats on August 10.

Lincoln Center Out of Doors 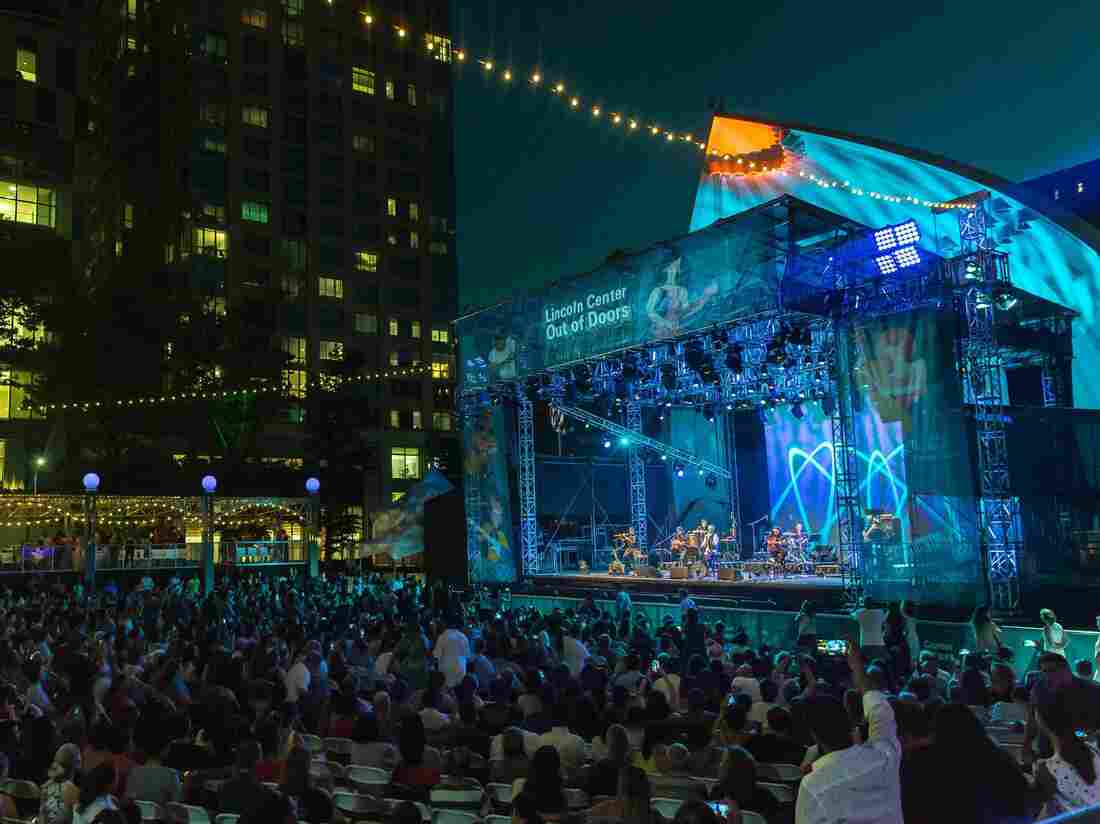 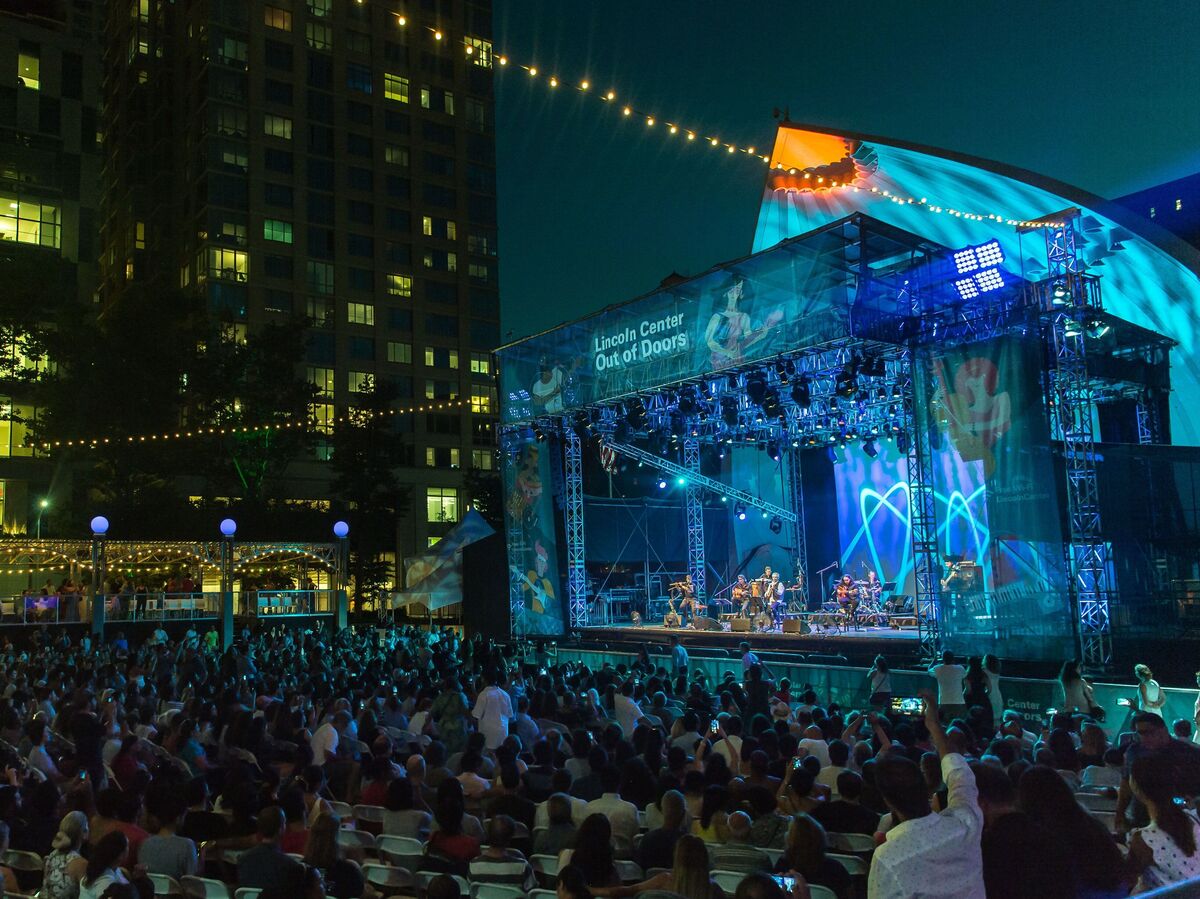 Faramarz Aslani performs at Lincoln Center Out of Doors.

Kevin Yatarola/Lincoln Center Out of Doors

Held in the Damrosch Park Bandshell of Lincoln Center on the Upper West Side, "the country's longest-running free outdoor festival" has been filling the plazas with music and dance for 49 Augusts.

This uptown playground is a hotbed of smart cultural programming, mixing in touring artists with uniquely designed showcases of the wow-I-had-no-idea variety. The space can seat up to 3,000 people, with enough air to breathe under a breezy sky.

Take the subway to 59th or 66th street. Gates open one hour before the performance, and the line for first-come, first-served seating forms on 62nd Street between Columbus and Amsterdam (bring water, wear sunscreen). The bar has summer cocktails, wines and beers, and food trucks park nearby.

Levitt Pavilion for the Performing Arts 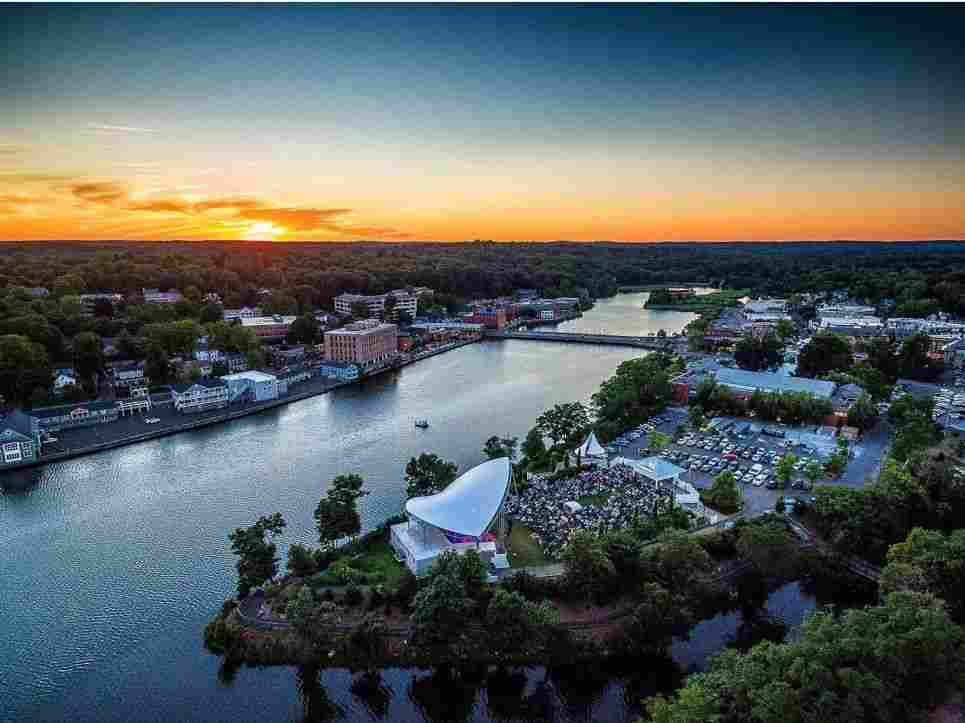 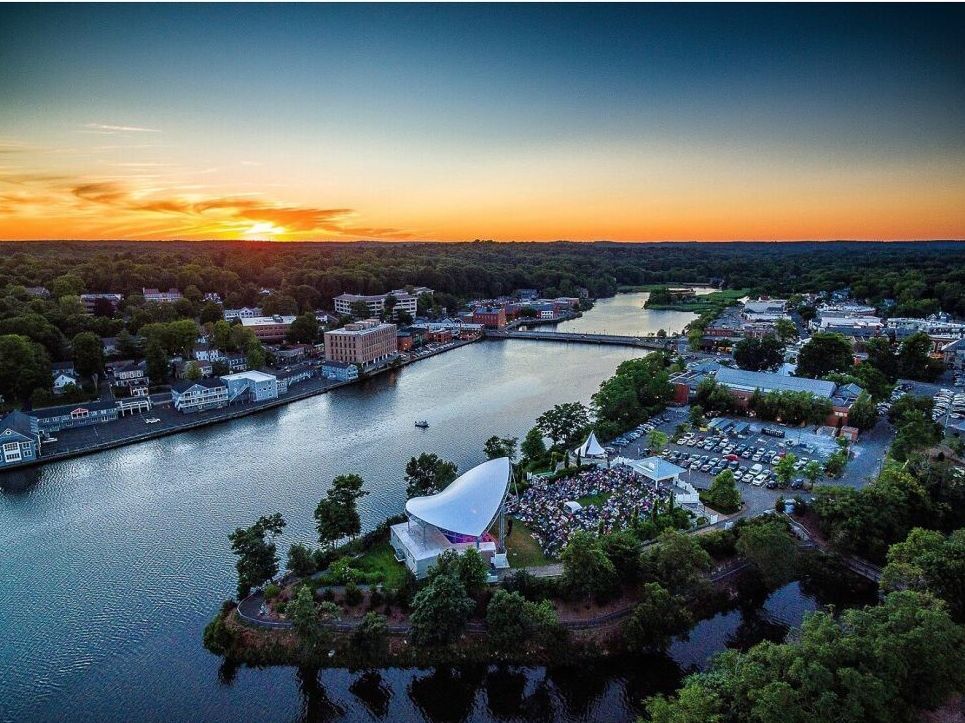 Levitt Pavilion for the Performing Arts.

Though it's a bit of an outlier, since it's a Metro-North train ride away from the big town, the free music series at the Levitt Pavilion in Westport is a standout for several reasons. Run by a nonprofit that takes risks on upcoming, original artists, and set in a truly lovely spot on the Saugatuck River, it's worth the extra effort to find.

With a crowd size that ranges from a few hundred to a few thousand, it's a more intimate experience than most city shows. There's a high-quality kids program and food, beer and wine for sale. Bring a blanket or folding chairs, a cooler and a picnic supper (for the free shows only); no dogs and no smoking, please. There are plenty of nearby restaurants for takeout, so you can get there in time for the sunset.

July 26, 2019, 7:30 p.m.
Drew Angus
The crafty pop hooks of Drew Angus have propelled him to late-night TV, the farewell season of American Idol and performances with Nile Rodgers and Harry Styles, among others.