Accessibility links
Review: 'Once Upon A Time In ... Hollywood' Is Tarantino's Ur-Fable Call it peak Tarantino: The writer/director's ninth film — about a Manson-family-adjacent actor and his stuntman — is an ode to the grimy, neon-lit place and time that shaped him.

Tarantino's Turned-On, Tuned-In Tinseltown: 'Once Upon A Time In ... Hollywood'

Tarantino's Turned-On, Tuned-In Tinseltown: 'Once Upon A Time In ... Hollywood' 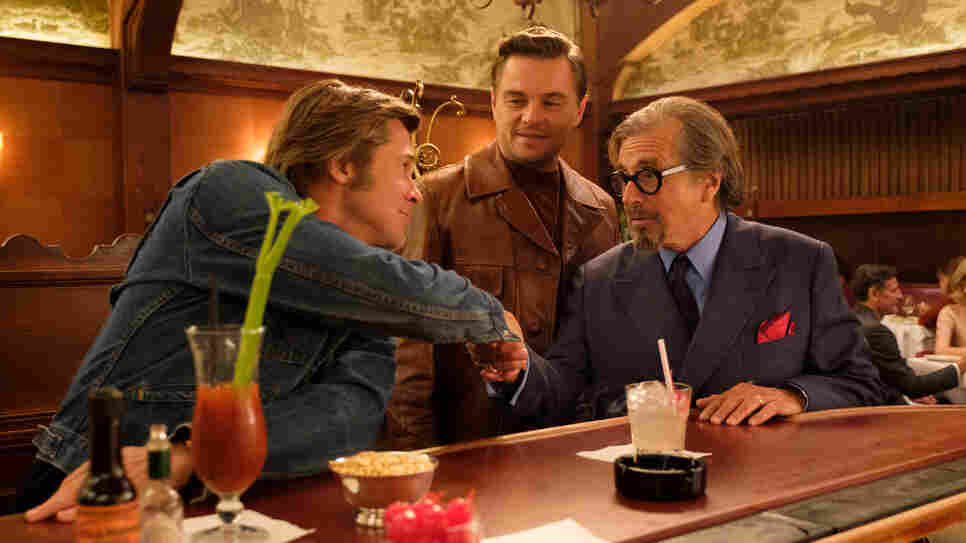 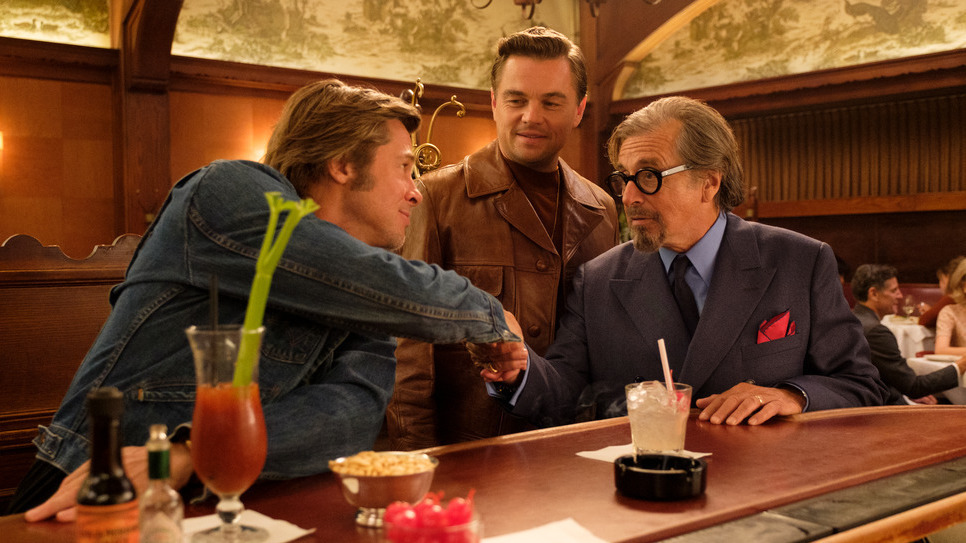 A bloody business: Cliff (Brad Pitt), Rick (Leonardo DiCaprio) and Marvin (Al Pacino) meet at Musso & Frank in Once Upon a Time in ... Hollywood.

Once Upon a Time in ... Hollywood, Quentin Tarantino's florid, sun-bleached, la-la land fantasia, would be a groovy trip of a movie in any era. But only now, with virtually the entire industry consumed by Disney's circle-of-life pop-cultural recycling algorithm — a vast, unsympathetic intelligence more larcenous and self-referential than 1,000 Tarantinos working in round-the-clock shifts — does it look like an essential one. Pulp Fiction, Tarantino's sophomore feature, hit with such seismic force 25 years ago that pleading its unimportance became a stubborn pre-Reddit subreddit of film criticism even as imitations proliferated. Now, QT is one of only a fistful of filmmakers who can still get studios to commit substantial resources ($90 million this time) to original screenplays. And lest his new film's conspicuous meditations on aging— and on the disappearing border between the big and small screens — elude you, he's just about done.

Tarantino's ninth and, he says, penultimate picture is a languid Rosencrantz and Guildenstern-ing of the 1969 murders of Sharon Tate, Jay Sebring and three others by members of the Manson cult, told mostly from the point of view of Tate's fictitious next-door neighbor. That would be fading TV star Rick Dalton (a career-best Leonardo DiCaprio), whose alcoholism contributed to the cancellation of his network western Bounty Law some years back. (Of course we get clips from the show; of course they're hilarious.) Since then, he's been reduced to sporadic villain-of-the-week gigs.

Cliff Booth (Brad Pitt, sharing a title card and a pay grade with Leo) was Rick's stunt double, but now he's just his driver, cheerleader, errand boy and professional best pal. While DiCaprio makes Rick a bundle of human-scale neuroses, unmanned by the realization of his obsolescence, Pitt paints Cliff as a more laconic figure — a bronzed, ageless, sentient pair of sunglasses who can stand up to Bruce Lee (Mike Moh) in a fight, declines sex with an underage hitchhiker (Margaret Qualley) on purely legal grounds, oh and also he just maybe murdered his wife.

That last bit is one of a few threads Tarantino leaves wantonly unsnipped. For yea, he shall fear no thinkpiece — not even the ones that have already appeared bemoaning the fact that Margot Robbie's Sharon Tate is present here more a set element than a character. Her most revealing act is to introduce herself to the staff of the Bruin Theater in Westwood when she decides to take in a matinee of the Dean Martin spy farce The Wrecking Crew, in which she has a supporting role. Robbie-as-Tate's face lights up every time the audience laughs at her pratfalls or applauds after her fight scene for which Lee trained her. Lee was indeed the credited "Karate Advisor" on The Wrecking Crew, but sorting out how much of the showbiz mise-en-scene here is fact and how much is, how you say, legend is a big part of what makes this one even more seductive to New Hollywood-era cinephiles than, well, every other Tarantino joint.

The bulk of the 160-minute picture takes place six months before the tragedy, a period during which Rick watches Tate and her famous husband Roman Polanski (hot off Rosemary's Baby) with envy. He's preparing for yet another bad-guy TV part, while pondering an invitation to go make Spaghetti Westerns with Sergio, um, Corbucci. (Lancer, the TV show he's guest-starring on, was real; the Italian movies he's mulling — one of them called Kill Me Quick, Ringo, Said the Gringo — are not. Pity.)

The biggest chunk of the narrative unfolds as Rick fights his way through a grueling day on the set, buoyed by a lunchtime conversation with his 8-year-old co-star (an astonishing Julia Butters), while Cliff gives that hitchhiker a ride back to George Spahn's movie ranch in the Santa Susana Mountains. Tarantino shoots the show-within-the-show like it's one of his films, with long takes and elaborate camera moves. TV can do this now; in 1969, it was decades off. Meanwhile, Cliff's walk across a chalky patch of canyon to check up on his old pal George (Bruce Dern, in a one-scene part that would've been Burt Reynolds', had he lived) while surrounded by feral flower children becomes the most suspenseful scene in a movie this year.

It's a hilarious and enveloping fable replete with all the Tarantino hallmarks —stellar performances, instantly memorable dialogue, an expertly culled playlist of songs that (mostly) haven't been neutered by overexposure, long intervals of tension punctuated by brief but sickening violence. But there's something new to the mix this time. Not maturity, heaven forfend. It's more like tranquility, as the 56-year-old auteur reflects upon the passing of his era. There's an axle-grinding shift that occurs deep into the picture, but for 135 minutes or so it's the most relaxed and elegant filmmaking of Tarantino's career.

Also the most personal. Once Upon a Time is set in February and August of 1969, when Tarantino was six and seven years old. This time, his characters talk about '60s movies and music and TV shows because it's the '60s and because they work in showbiz, not because they're alienated, out-of-time obsessives in the present day. With the help of regular cinematographer Robert Richardson (who shot Oliver Stone's best movies, and all of Tarantino's since Kill Bill) and production designer Barbara Ling (who did, uh, Joel Schumacher's two disavowed Batman films), he has ushered us all into the neon-lit Los Angeles of his memory, back when the 101 was full of Cadillacs and Buicks and they all spent more time moving than idling.

In the gimmicky way Tarantino peoples his appealing imaginary characters among the Tates and the Polanskis and the Bruce Lees and the Steve McQueens, Once Upon a Time owes a little something to Forrest Gump, the cloying, boomer-revering megahit that stole what should have been Pulp Fiction's best picture Oscar (and QT's directing Oscar) way back when. You might say Tarantino's oeuvre is like a box of chocolates: Some of them are more bitter and unpleasant than others, but they're all still chocolate. Once Upon a Time in ... Hollywood might be the tastiest one in the box. Top three, anyway. Let's revisit the subject in another 25 years.