Accessibility links
'In God We Trust' Signs Go Up In South Dakota Public Schools, As Required By Law When students return to class next month in South Dakota, they'll be greeted by the national motto prominently displayed on school walls. 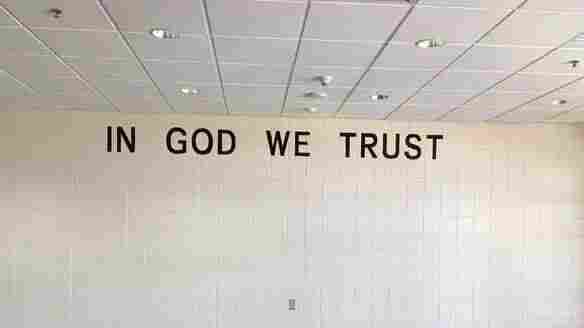 An "In God We Trust" sign is seen at a middle school in Rapid City, S.D. Staff began installing the national motto in the district's 23 schools in May. Katy Urban/Rapid City Area Schools hide caption 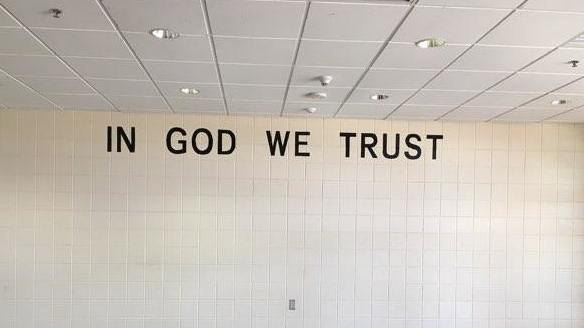 An "In God We Trust" sign is seen at a middle school in Rapid City, S.D. Staff began installing the national motto in the district's 23 schools in May.

Public school students in South Dakota will notice something different on their first day back to school — the national motto, "In God We Trust," prominently inscribed on walls in stencil or paint.

A new state law that took effect this month requires the message to be displayed in an area where students are "most likely" to see it, such as a cafeteria or entryway.

Gov. Kristi Noem signed the requirement into law in March. It says the motto must be at least 12-by-12-inches in size and easily legible. It can take the form of a mounted plaque, student artwork or other appropriate forms determined by the school principal.

Lawmakers who proposed the law believe the quote will inspire patriotism, according to The Associated Press.

In Rapid City, school staff members have spent the last couple of months working to install the motto in each of the district's 23 schools.

"As soon as we heard that it was going to be a state law ... we started looking at different options and we chose to do stenciling as it is the most uniform and most affordable option," Rapid City Area Schools community relations manager Katy Urban tells NPR.

Stenciling the motto cost a total of about $2,800 in Rapid City schools, she said.

The new law has ignited conversation among the community. Although Urban says most people believe "it's a really great thing for our schools and our districts and that kids are seeing it posted on a daily basis," she adds that there are vocal critics.

Urban describes her community as fairly conservative. But she has also seen social media comments that threaten a lawsuit, claiming the motto excludes non-Christian faiths.

Earlier this summer, a group of students from Stevens High School in Rapid City approached the school board and suggested alternating God with Buddha, Yahweh and Allah on the signs — along with other terms such as "Science" or simply, "Ourselves" — in an effort to be more inclusive.

"I think that's a really foundational element of American society, is that we are a cultural melting pot and it is really important that we make all people who come to America to feel welcome and to be more in accordance with the First Amendment since we all have the freedom of religion," Stevens High student Abigail Ryan told KOTA-TV.

The board, however, took no action and followed through with the original plan.

Acknowledging that the law could trigger a lawsuit, legislators included a contingency plan that calls on the state to assume all financial responsibility for any fallout from the "In God We Trust" message. And if any suits are filed against a school district, employee, school board or member of the school board, the law states that South Dakota's attorney general will represent them at no cost.

As of Thursday, the attorney general's office said it had not received any lawsuits thus far.

The ACLU of South Dakota told NPR that its officials were unavailable to provide comment before this story published.

"In God We Trust" first appeared on U.S. coins largely because of increased religious interest during the Civil War, according to the Treasury Department. It was declared the official U.S. motto in 1956, during Dwight Eisenhower's presidency.