Accessibility links
NPR Review: 'We Love Anderson Cooper,' By R.L. Maizes R.L. Maizes' new story collection is a quirky mix of humor, gravity and warmth. She's drawn to outsiders who yearn for connection and who display behaviors and feelings they're not proud of.

Meaning Well And Making A Mess In 'We Love Anderson Cooper'

Meaning Well And Making A Mess In 'We Love Anderson Cooper' 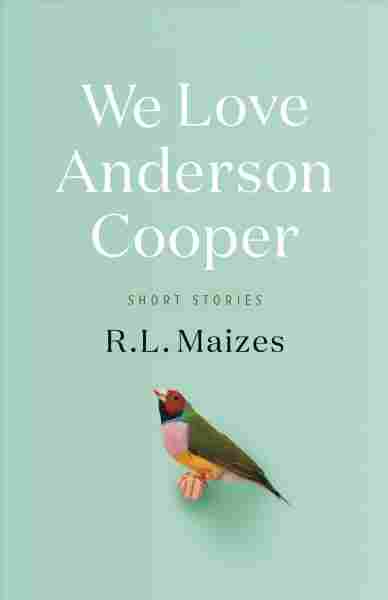 The attention-grabbing title isn't the only winning thing about R.L. Maizes' debut collection. The declaration serves as a wry punchline in the book's outstanding opening story, which is about a boy who decides to out himself publicly at his bar mitzvah rather than read his assigned anti-homosexual Torah portion from Leviticus. "Why didn't you talk to us first?" his well-meaning but work-distracted parents ask after the disastrous service at his Long Island temple, a video of which goes viral. "We would have understood. We love Anderson Cooper."

Their response is a wonderful introduction to the quirky mix of humor, gravity and warmth that characterizes Maizes' stories. She's drawn to outsiders who yearn for connection — not just adolescents, but adults who grapple with religious identity, sobering financial realities and recent losses. Most of her characters mean well, but they tend to make a mess of things. They display feelings and behaviors they're not proud of. "It's monstrous, she knows," a woman who rues her husband's recovery from cancer acknowledges. It's not that she wants him to die; she just misses the distraction that caring for him provided from their dogs' accidental deaths.

Jealousy is a recurrent theme, often involving pets. In "The Infidelity of Judah Maccabee," a nerdy Jewish actuary resents his cat's growing attachment to his (frankly wonderful) Protestant girlfriend. Barry becomes convinced that Anette is seducing Mac (the cat) with her Christmas baking and tinselly tree — because after all, "that was how assimilation began, with baked goods." Maizes gently flags the ridiculousness of Barry's insecurities even as she traces them back to his long-held fear, triggered by Christmas, "that as a Jew he would always be an outsider in America." Along the way she throws in some funny, classic Jewish shtick, including Barry's grudging reaction to Anette's homemade blintzes: "Like the kind my mother used to buy."

In 'Very Nice,' Even The Dog Is Unfaithful

Marriage Is Passionate, Not Perfect, In 'The Most Fun We Ever Had'

Guilt factors into several stories, including "No Shortage of Birds," in which a girl feels responsible for her father's death because she failed to warn him that a golf ball was heading his way. Her mother buys a pet parakeet to cheer her up, but this only exacerbates Charlotte's sense of loss. She is "furious to hear her mother offer the bird endearments that rightfully belonged to Charlotte and her father," Maizes writes. In the world of hardworking families she evokes, children vying for their preoccupied parents' full attention often have to make do by speaking to their backs. When Charlotte eventually explains her antipathy toward the bird, she addresses her mother's reflection in a pet-shop window: "It was like you were gone too," she says.

Jealousy takes a more insidious turn in several stories, including two creepy tales that involve the dark side of obsessive pet love. In one, a woman's allegiance to her feral cat outweighs her concern for her husband and daughter. Although Maizes' characters often behave in disturbing ways, she manages to tap into the twisted emotional logic of their conduct with uncommon understanding.

Sometimes magical realism helps soften the heartaches of reality — which is the case with the physically deformed painter who improves upon his clients' and his own appearance by becoming a medical tattoo artist. In the weakest story of the lot (though still not shabby), a therapist's new couch takes on supernatural healing properties but decimates her practice since all her patients "discovered brighter outlooks and quit therapy."

Although Maizes' characters often behave in disturbing ways, she manages to tap into the twisted emotional logic of their conduct with uncommon understanding.

No surprise that Maizes' marriages tend not to be the happily-ever-after variety, as a financial consultant who was a casualty of the 2008 economic collapse discovers. He realizes that he'd hated his high-powered job and the affluent life it bought, and he takes a gig delivering pizza from his BMW. To say his wife and twin daughters are not happy with this change is an understatement. "Do you mind sharing how much longer you're going to be on your vacation?" his wife asks.

Hard times — characters under duress — are a great catalyst for fiction. We meet Maya, the 65-year-old former bill collector in "Collections," after the rich art collector she has lived with and taken care of for 14 years dies, leaving her high and dry. Maizes sums up the situation succinctly: "His daughters never visited. Not until he was dying. Then they came and cried and read the will and stopped crying." Ouch. Forced to move from her dead lover's ocean-view condo and back into her derelict Miami bungalow, Maya realizes that "She had forgotten how to live without money." But she's a practical person who, like many of the characters in this book, is good at finding unusual ways to deal with her troubles.

Maizes' admirable achievement in these charmingly offbeat stories is to balance fascination with sympathy and gravitas with humor. The good news: Her debut novel is due next year. But have fun with these first.