Accessibility links
Why Grouchy, Rude 'Catwad' Is Catnip To Kids Our monthly children's book column returns with a look at the dubious (to adults, at least) charms of cartoonist Jim Benton's grouchy feline Catwad, who has mastered the anti-joke.

During summer, I am home with my kids, and I have to find something to keep them occupied so I can work. Last year I instituted "Summer of the '70s" and had them watch The Brady Bunch in the morning, then go drink from the hose in the afternoon. This year, it's "Summer of the '80s," so it's my personal favorite, The Golden Girls, in the morning, and the hose in the afternoon.

I didn't know what I had unleashed. I should have known, I really should have.

This morning at the breakfast table, I noticed my 5-year-old was biting her fist instead of her waffle. "What's the matter?" I naively asked. "Nothing," she said. "I'm just that lady on the show." (Insert Golden Girls opening credits here to see Dorothy biting her fist.) And as much as I love the show, offering up Sophia Petrillo to an already sassy 9-year-old may not have been the smartest decision. How many times a day can I hear "blow it out your ditty bag" before I go crazy?

Catwad is a new character from cartoonist Jim Benton, whom adults may know from The New Yorker, and kids may know from the Dear Dumb Diary series. Catwad is grouchy. Catwad is mean (think Grumpy Cat and you've got it). Catwad's grouchy meanness is consistently foiled by his naive, sunny and dim-witted friend Blurmp. These collections of short comic stories are a bit rude, a lot ridiculous and a little profane.

I didn't understand my kids' fascination.

I'll get this out of the way right now: I am not a funny person. I know two jokes, and they are both grammar-related, so that tells you all you need to know about my sense of humor. Being silly with my kids or even allowing them to be silly themselves goes against my nature and is a real challenge for me. That's true for everyday life, and it's true for reading as well. Should my kids be barraging me with Nerf arrows, or should they be changing the oil in the pickup? Should they be yukking it up with Dog Man or should they be getting frustrated with the sourpuss Mary Lennox in The Secret Garden? I know my instinctual answer.

So I take a deep breath and try to let go a little. After all, I must have SOME sense of humor if I love The Golden Girls so much; can't I love Catwad, too? 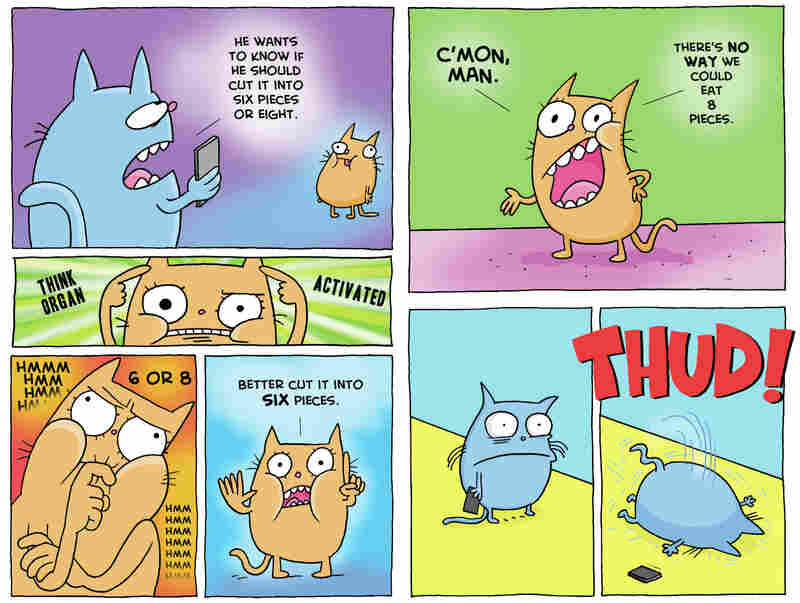 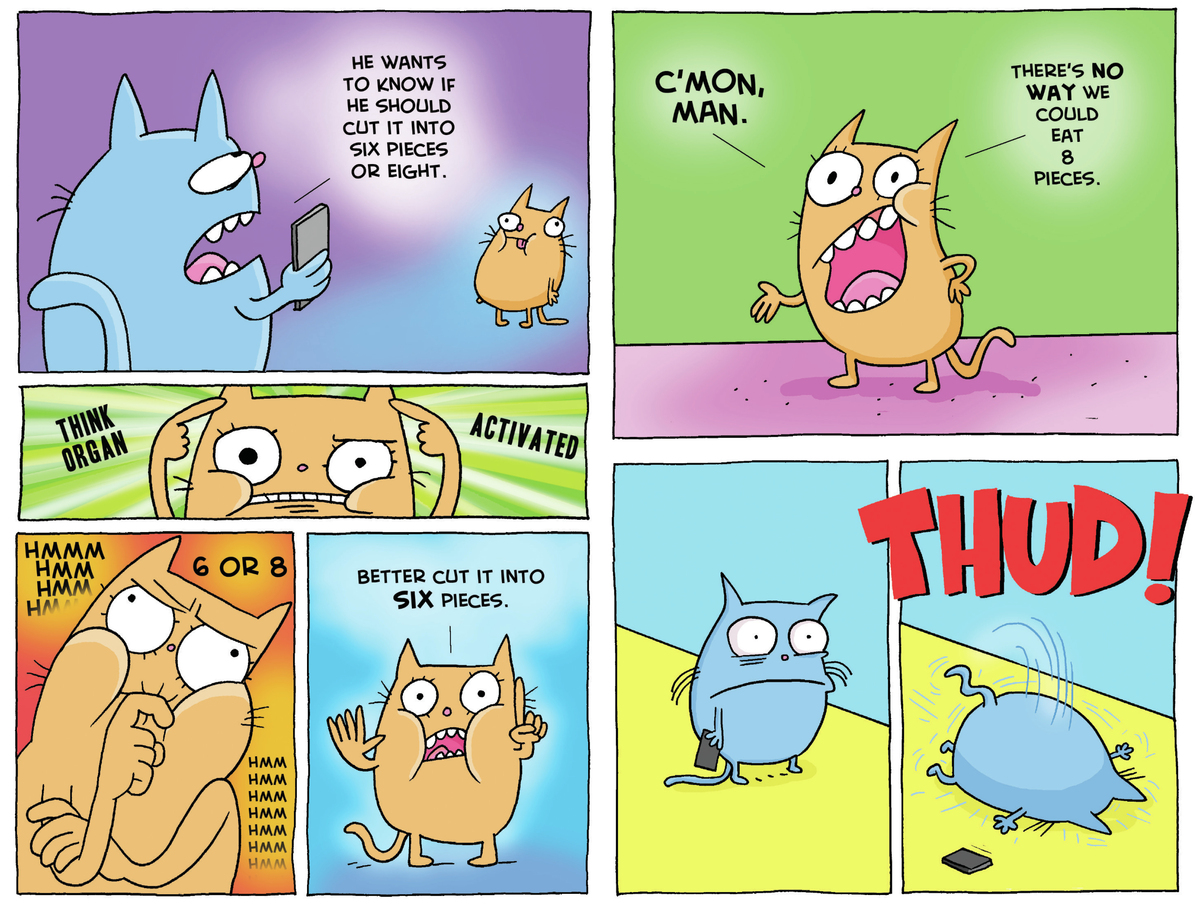 Two friends are ordering a pizza over the phone:

"He wants to know if he should cut it into six pieces or eight."

"Hmm ... six or eight? Better cut it into SIX pieces. There's NO WAY we could eat eight pieces."

OK, Blurmp, I see the Rose Nylund here. I can appreciate that.

Serious person that I am, after witnessing my kids' immediate obsession with Catwad, I researched why kids love corny jokes and potty humor (I told you I'm not silly), and after wading through a million "how to — please not in front of the neighbors — not overreact when your kid comes home from school with a joke that makes your hair curl" stories, I found loads of psychology articles about how humor is key to childhood development, which I can appreciate, but also a bunch of articles about how I'm setting my kids up for serious disorders by not being a funny parent, which scared me to death.

I am not a funny person. I know two jokes, and they are both grammar-related, so that tells you all you need to know about my sense of humor.

But corny jokes and potty humor are just a small part of Catwad, so I had to dig deeper to figure out why my kids are so obsessed with it.

Jim Benton has won about every award known to man, but if someone were to tell me he grew up watching The Three Stooges and listening to old vaudeville albums on a Fisher Price record player, I wouldn't be surprised. Like the Stooges and vaudeville, at first glance Catwad seems a little crude — the illustrations are simplistic and a little creepy (I'm having a hard time getting the image of Catwad as a writhing, gelatinous heap of an inside-out mouth out of my head) — and well, the jokes seem weird and unfunny, because also like the Stooges and vaudeville, Benton's humor often relies on the ANTI-JOKE.

In It's Me, the first Catwad book, there's one particular comic that illustrates Benton's mastery of the anti-joke. 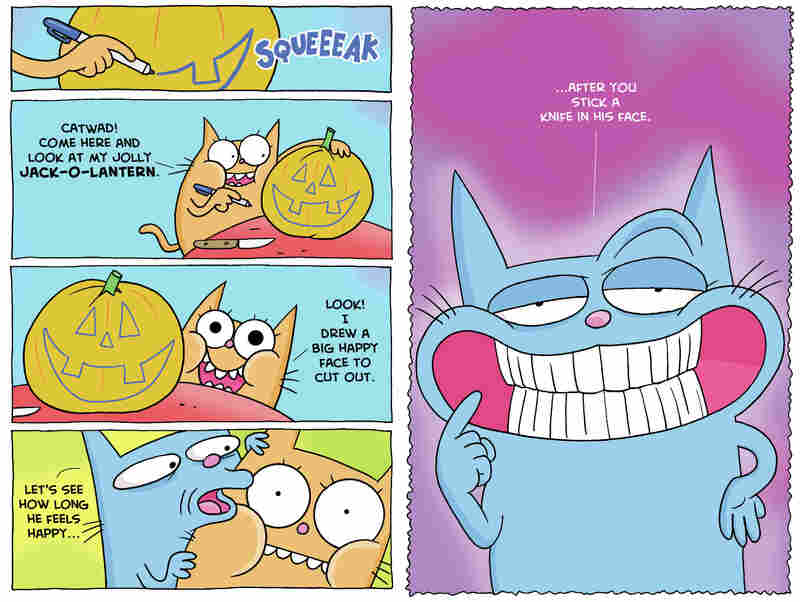 Catwad, master of the anti-joke. Courtesy of Scholastic hide caption 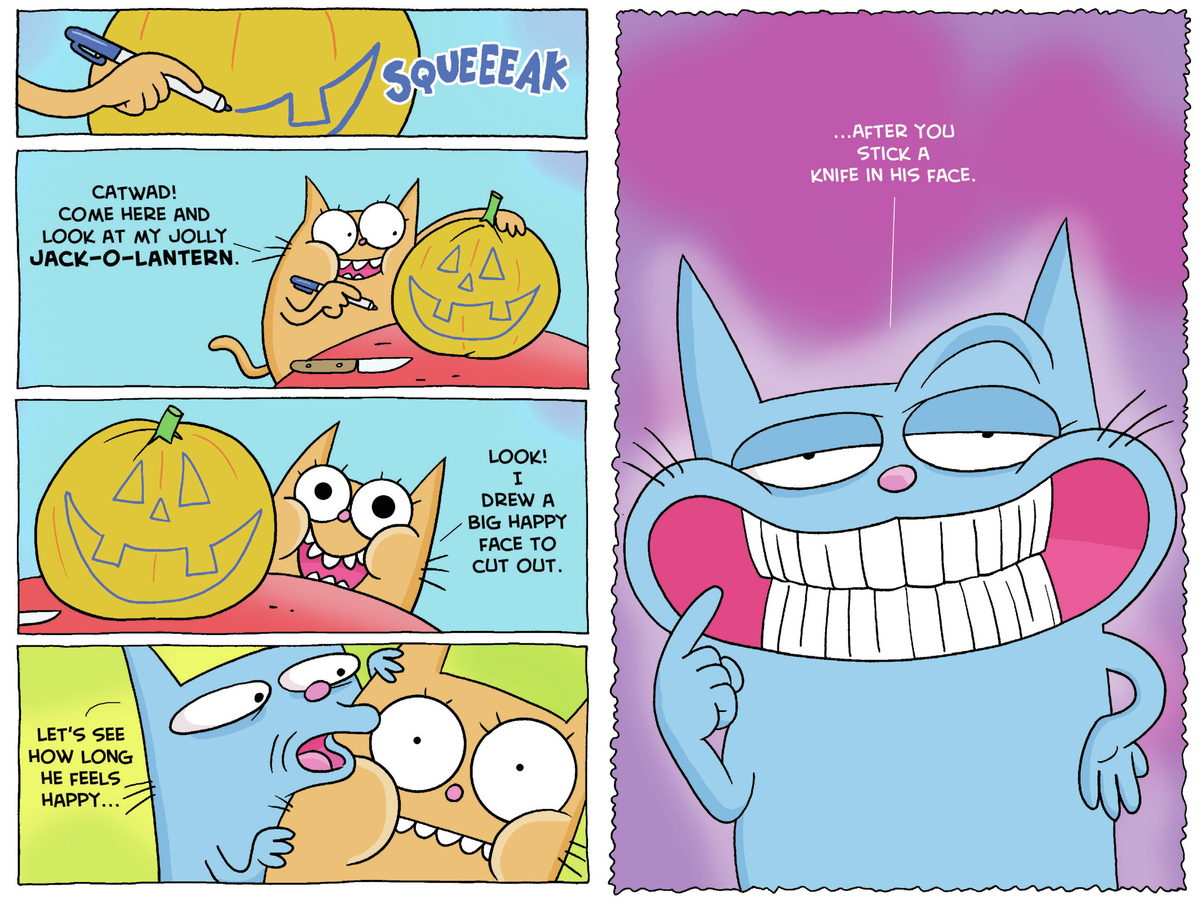 Blumrp is getting ready for Halloween.

"Catwad! Come here and look at my jolly jack-o-lantern. Look, I drew a big happy face to cut out."

"Let's see how long he feels happy ... after you stick a knife in his face."

Eureka! NOW I know why my kids are so obsessed with Catwad.

My kids love to make up jokes, but not a single one of them actually understands what a joke is. The concept of a punch line is far beyond their pay grade at this point, but they crack themselves up anyway. A recent article in The Atlantic magazine cuts right to the core of the phenomenon. "Kids tend to tell bizarre jokes because they haven't yet mastered what exactly makes a joke, a joke." It may look like a joke, and sound like a joke, but it sure doesn't taste like a joke.

'Catwad' is not funny, so it's HYSTERICAL. 'Catwad' is every bit the joke book kids would write themselves if grown-ups stopped telling them that their jokes are not jokes.

And that's Jim Benton's genius. No one loves an anti-joke more than a little kid, and Jim Benton knows it. Catwad is not funny, so it's HYSTERICAL. Catwad is every bit the joke book kids would write themselves if grown-ups stopped telling them that their jokes are not jokes.

So clearly I owe Jim Benton a huge debt. Not only is he saving my kids from the psychological damage I am inflicting on them as an unfunny parent, but he's validating their own weird idea of humor, which is much more encouraging than the forced guffaw I produce when my kids tell me their own jokes. And it doesn't hurt that he's giving them a bit of Sophia and Rose in cartoon cat form, which is definitely humor I can appreciate.

Catwad: It's Me, Two comes out in September, so the repetition of jokes in my house continues.