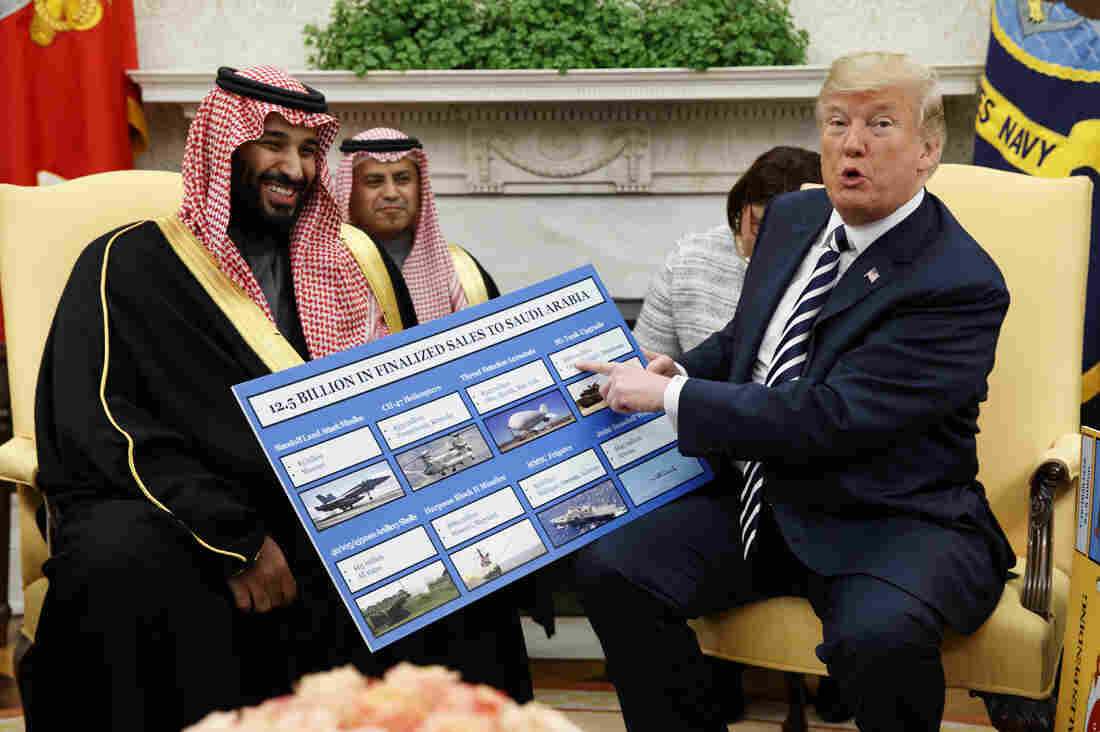 President Trump, shown here during a 2018 meeting with Saudi Crown Prince Mohammed bin Salman where they discussed arms deals, has blocked an effort to stem the sale of weapons to the Gulf country. Evan Vucci/AP hide caption 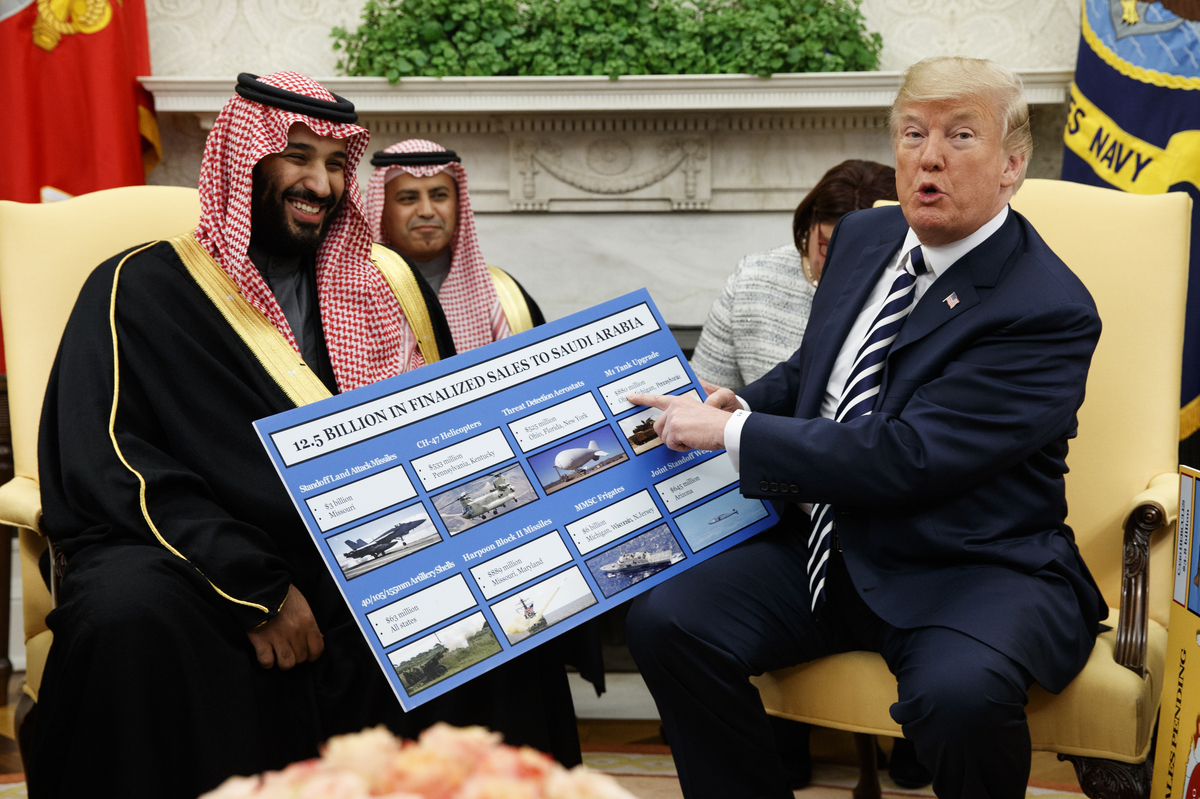 President Trump, shown here during a 2018 meeting with Saudi Crown Prince Mohammed bin Salman where they discussed arms deals, has blocked an effort to stem the sale of weapons to the Gulf country.

President Trump has vetoed a series of measures approved by bipartisan lawmakers that were aimed at blocking the sale of weapons to Saudi Arabia.

Trump said the three resolutions would "weaken America's global competitiveness and damage the important relationship we share with our allies and partners."

Lawmakers in support of the bills have criticized the Saudis' actions in the Yemen conflict where thousands of civilians have died, and the death of journalist Jamal Khashoggi in the Saudi consulate in Istanbul.

The two measures vetoed by Trump aimed specifically at arms sales to Saudi Arabia were approved by the Senate last month with the support of seven Republicans, including Sen. Lindsey Graham of South Carolina and Sen. Susan Collins of Maine. Trump also vetoed a bill that would have limited the sale of weapons to the United Arab Emirates, which has been an important coalition partner to Saudi Arabia in its ongoing military campaign in Yemen.

The legislation emerged after frustration on Capitol Hill after the Trump administration decided to go forward with a multibillion-dollar weapons and equipment sale to the Gulf countries in May without the approval of Congress. As The Associated Press reported, Secretary of State Mike Pompeo said threats from Iran were the reason the sale was approved without lawmakers formally weighing in. Iran and Saudi Arabia are regional rivals.

Sen. Bob Menendez, a Democrat from New Jersey, sponsored the bills that his office described as intended "to block the Trump Administration's unprecedented attempt at approving over $8 billion in arms sales to Saudi and UAE based on a false emergency and without Congressional consent."

On Thursday, the Senate Foreign Relations Committee backed a separate bill in a 13-9 vote that Menendez described as "a comprehensive effort to hold Saudi Arabia accountable for the murder of U.S. resident and journalist Jamal Khashoggi, and the Saudi-led coalition for its role in the devastating conflict in Yemen."

"President Trump's veto to continue helping cover for Saudi Arabia's transgressions, including the murder of Jamal Khashoggi, was as expected as it was avoidable," Menendez told NPR on Thursday. "There is clearly no level to which this Administration will not stoop to curry favor with the brutal Saudi leadership."

He called for "Congressional Democrats and Republicans to speak truth to power and stand up for our institutional prerogatives by overriding the President's veto."

Last month, a special U.N. investigator looking into Khashoggi's death said there was "credible evidence" that senior Saudi officials had planned what she called a "deliberate, premeditated execution."

Human rights groups have repeatedly criticized Saudi Arabia and its coalition partners for the high number of civilian casualties since they started their offensive four years ago against Shiite Houthi rebels in Yemen. The U.S. military assists the Saudi-led coalition with refueling jets and targeting training.

The airstrikes have repeatedly hit sites with large numbers of civilians such as markets and weddings. In a widely condemned example last year, an airstrike hit a bus carrying children. Last November, the U.N. said it documented 6,872 civilians killed and 10,768 injured since the start of the Saudi campaign in March 2015, and the majority of the casualties were caused by Saudi-led coalition airstrikes.

"The United States is very concerned about the conflict's toll on innocent civilians and is working to bring the conflict in Yemen to an end," Trump said in his veto message. "But we cannot end it through ill-conceived and time-consuming resolutions that fail to address its root causes."

He said that limiting the arms sales would "likely prolong the conflict in Yemen and deepen the suffering it causes." The U.S. has said it is working with Saudi Arabia to reduce civilian casualties.

These three new vetoes from Trump bring his total up to five over the course of his presidency. The first – and the only one not involving the conflict in Yemen — was in March, where he vetoed a resolution that would end his declaration of a national emergency on the southern border.

In April, Trump issued his second veto when he blocked a bipartisan resolution to end U.S. involvement in Yemen hostilities, calling it an "unnecessary, dangerous attempt to weaken my constitutional authorities."