Accessibility links
Resurrected Stones Film Finds Pivot Point In Rock History In December of 1968, some of the biggest names in rock and roll came together to film The Rolling Stones' Rock and Roll Circus. The film was recently given a 4K restoration. 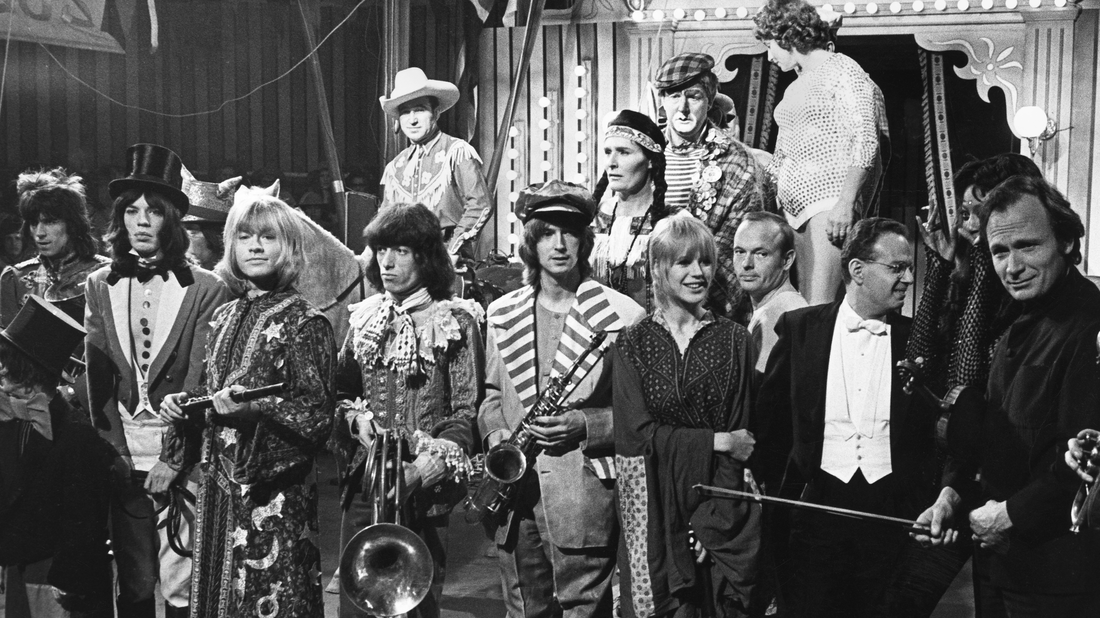 The Rollings Stones, Marianne Faithfull and other performers at the Rock and Roll Circus. Michael Randolf/Courtesy of the production company hide caption 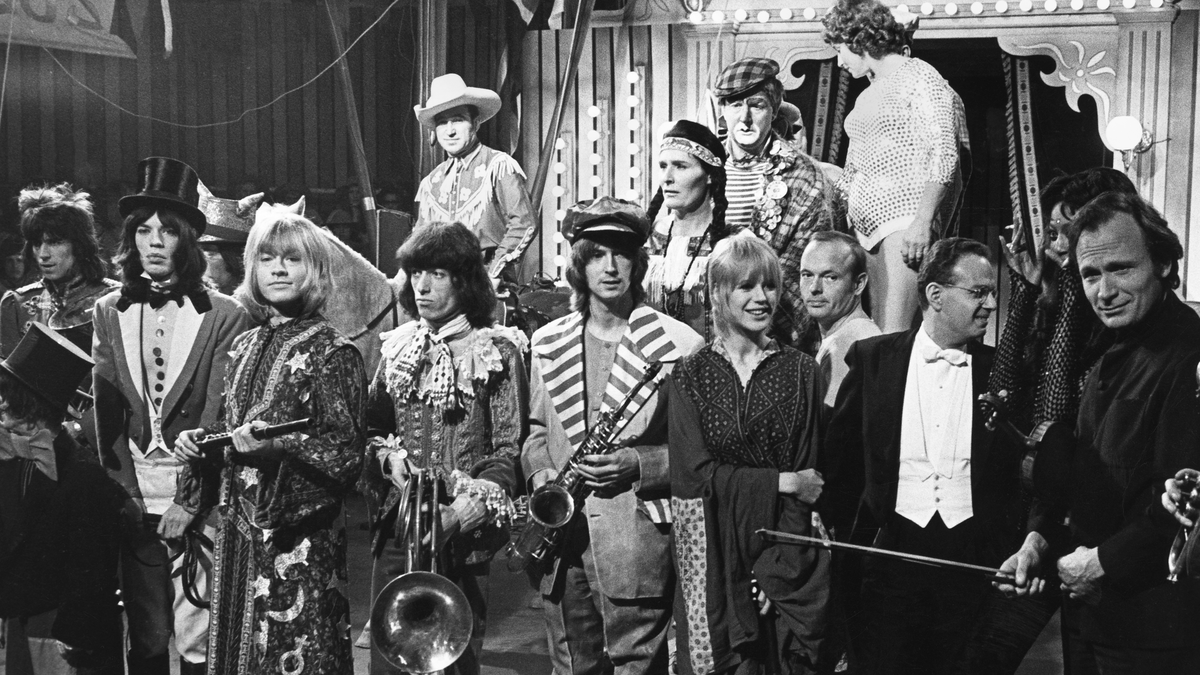 The Rollings Stones, Marianne Faithfull and other performers at the Rock and Roll Circus.

Michael Randolf/Courtesy of the production company

In December of 1968, some of the biggest names in rock and roll came together to film a concert organized by The Rolling Stones. Over the two-day lifespan of the "Rock and Roll Circus," which was intended to air on the BBC, the Stones recorded performances from that era's most celebrated artists — the Who, John Lennon and Eric Clapton, to name a few.

But the Stones wanted some re-shoots, and the production lost momentum. Then, the filmstock went missing.

Decades later, the Circus' reels were found leaning against a hay bale in a barn in France. Recordings from the event were subsequently released in 1996. Now, a remastered film and concert album presents unreleased outtakes from Lennon and others. The 4K restoration captures a snapshot of a critical moment in rock and roll history — a time when the Stones and their contemporaries sat at the height of their fame but teetered on the brink of Altamont-esque unraveling.

Michael Lindsay-Hogg, a young director in the 1960s, shot the show. He recalls how the Circus — complete with a live tiger, trapeze artists, and a 25-year-old Mick Jagger dressed as a ringmaster — symbolized the decade to an almost-surreal degree.

"The Who, Jethro Tull, Taj Mahal, Marianne Faithfull, John Lennon, Eric Clapton and the Rolling Stones was the 1960s in one room," says Lindsay-Hogg. "On the day, I knew that it was more than a rock and roll show. It was almost a document of its times."

David Dalton, who covered the event for Rolling Stone, shared a similar impression with filmmaker Robin Klein in a 2003 interview included in the film's re-release. "It was just still at the point when everybody thought rock was going to inherit the earth," Dalton says in the film. "We all assumed Mick and Keith [Richards] were on the phone to Fidel [Castro] and Mao [Zedong], and you know, Mick was going to become a member of Parliament. And say delusionary if you wish, but it really was sort of an inspiring time." 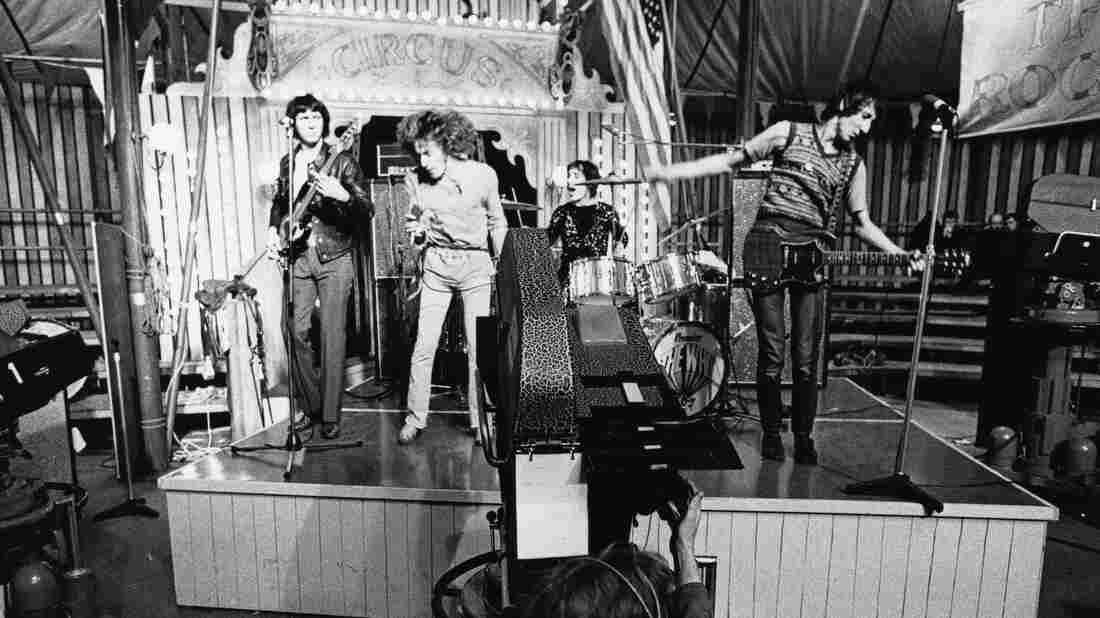 The Who perform at the Rolling Stones' Rock and Roll Circus. Michael Randolf/Courtesy of the production company hide caption 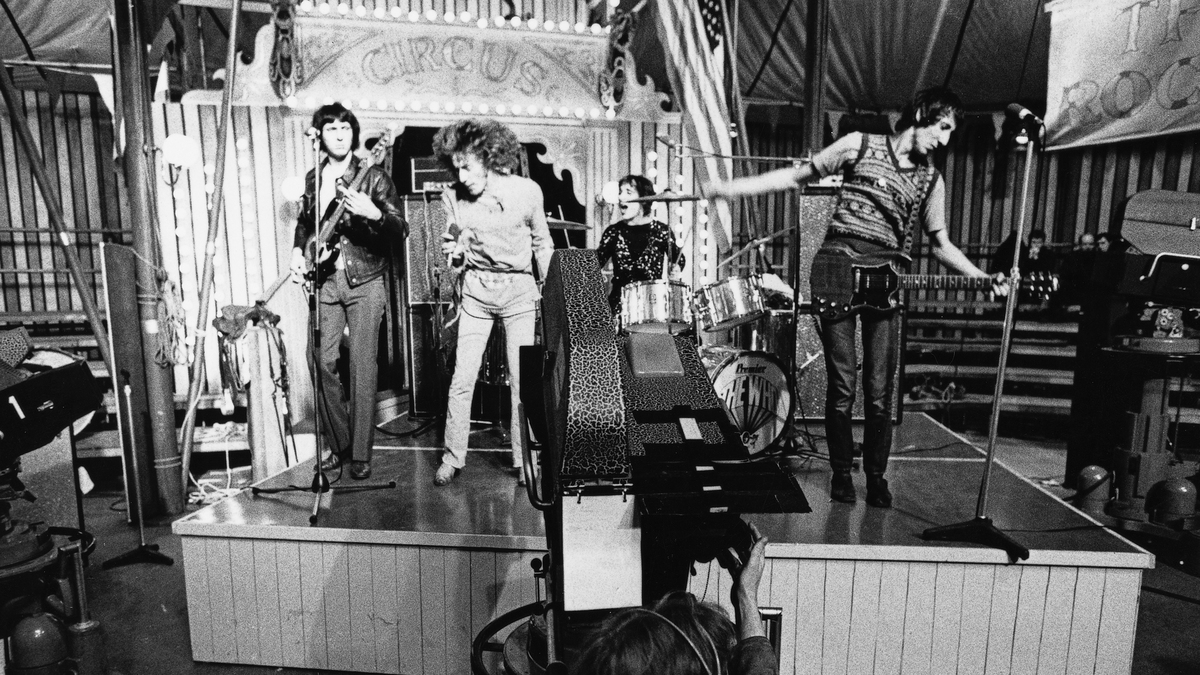 The Who perform at the Rolling Stones' Rock and Roll Circus.

Michael Randolf/Courtesy of the production company

The Circus' legend-studded line-up came together in a quintessentially easygoing '60s-fashion. "All the performers in the show had basically come out of a little address book in Mick Jagger's back pocket," Lindsay-Hogg explains. "He looks up L, he calls John, and then John says he'll do it." Lennon, Richards and Eric Clapton joined forces to play as The Dirty Mac, a last-minute addition to the show and the group's one and only performance (which featured a jam with a classical violinist and Yoko Ono).

Still, Lindsay-Hogg says, there was a palpable sense of oncoming change amidst the Circus' fun. "In the middle '60s, no one had been wounded or damaged by drugs. But then, as we come into the last year of that decade, there was starting to be casualties. And I had a sense that things could not last in this glorious way."

Indeed, spontaneous supergroups aside, attendees of the Circus say there was a certain darker messiness about the event. The concert film was being shot with new French cameras that no one quite knew how to use and that kept breaking down. And as the event went on, the artists grew less and less sober.

In the remastered version of the film, Dalton describes watching Brian Jones onstage. "He almost looked as if he had become the kind of scapegoat for all the sins of swinging London," Dalton remembers. "He just looked like the gods had shunned him and turned their backs on him, you know?"

At the time of the Circus, heroin hadn't fully taken over the rock-and-roll scene — but it was looming. Marianne Faithfull, who played the Circus and spent many years struggling with addiction herself, also spoke with director Robin Klein about that moment in the rock and roll scene. "Everybody knew something was coming, and it did. Jimi Hendrix died, Janis Joplin died, Jim Morrison died, Brian Jones died," she says in the film. "There was an apocalyptic air about the whole thing."

A year after the Rock and Roll Circus, almost to the day, the Stones played at California's Altamont Speedway. An audience member was stabbed and died, and the show went down as one of the most infamous in popular music history. James Riley, a lecturer at Cambridge University and author of The Bad Trip, a book about the end of the '60s, traces a trajectory between the two events.

"When you watch the Rock and Roll Circus, it looks like a rehearsal for the terrible events that happened at Altamont," Riley says. "You see a band in transition. They're moving into a sort of diabolical, Luciferian set of personae, particularly on the part of Mick Jagger."

It is precisely for showing that moment of transition, Riley suggests, that the new concert film is so valuable. "I think it is impossible to see this without thinking of the tragic histories that befell a lot of these individuals," he says. "But what this film has captured is that pivot point. It captures all these characters just as they are moving from one phase to another."

Because of a production error, in a previous version of this report the photo of Keith Richards, John Lennon and Eric Clapton was reversed and made it appear as if they were left-handed guitarists.