Accessibility links
Judge Quashed Warrant For Journalist's Phone After Police Downplayed His Occupation Police searched Bryan Carmody's phone and raided his home and office this spring. A San Francisco judge has now quashed the warrant and ordered supporting court documents to be unsealed. 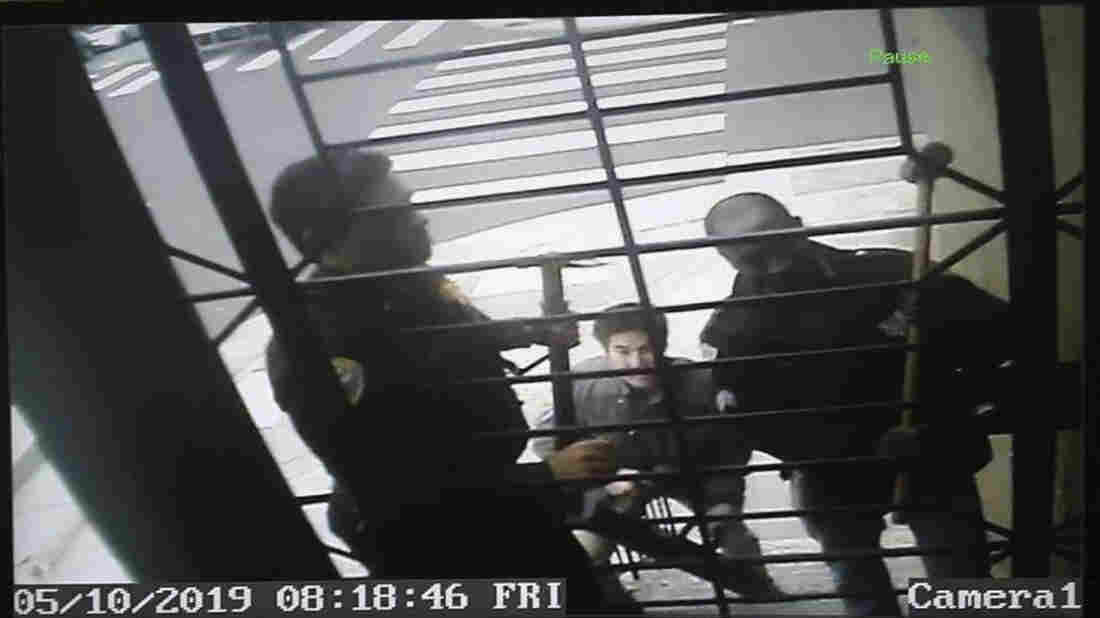 An image from surveillance camera video shows the encounter with police at the home of journalist Bryan Carmody in May. A judge this week quashed a search warrant used by the San Francisco Police Department. Bryan Carmody/AP hide caption 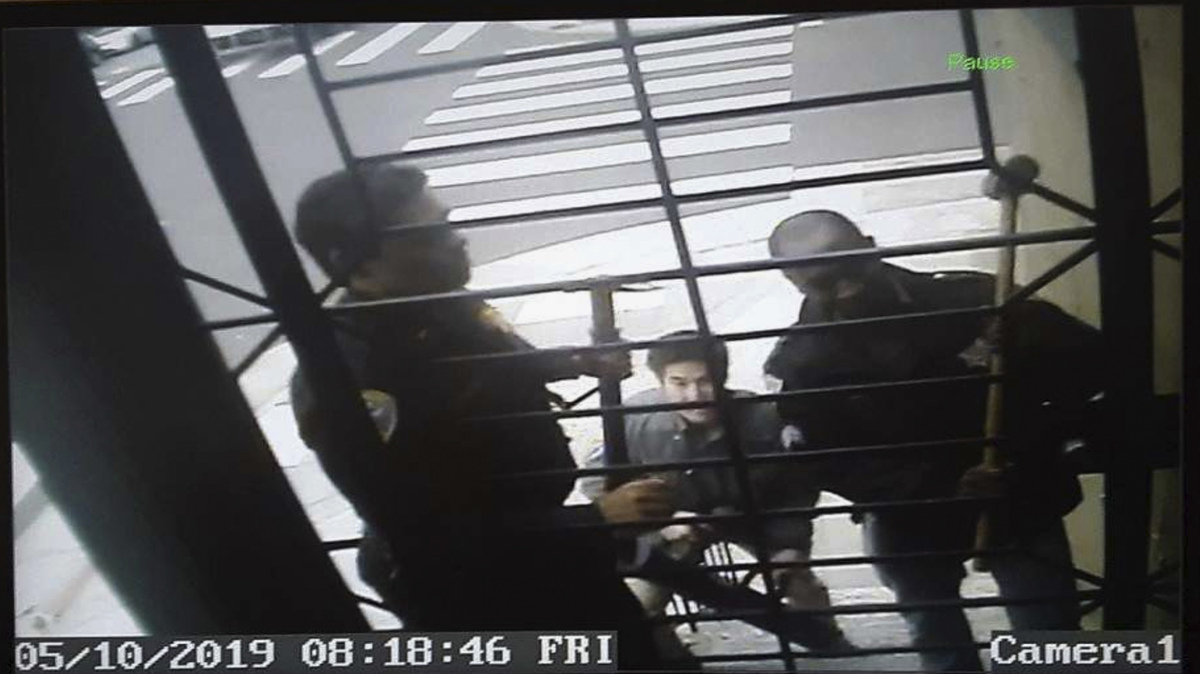 An image from surveillance camera video shows the encounter with police at the home of journalist Bryan Carmody in May. A judge this week quashed a search warrant used by the San Francisco Police Department.

A judge in California may have been kept in the dark when she issued a search warrant allowing San Francisco police to monitor the phone of a journalist who was suspected of obtaining a leaked police report, according to newly unsealed court records and the journalist's lawyer.

Attorney Tom Burke, who represents freelance journalist Bryan Carmody, says Superior Court Judge Rochelle East might not have been made aware of his client's profession when the police sought the warrant. (Editor's note: Burke represents NPR on freedom of information matters.)

In the spring, police officers began to secretly screen Carmody's cellphone calls and texts, his lawyer, Burke told NPR. It wasn't until more than a month later that Carmody learned his phone had been monitored — after police conducted a raid on May 10 that made national headlines, Burke said.

Police officers used a sledgehammer to open a gate to Carmody's house. He told NPR that officers searched his home "at gunpoint" and walked out with his computers, cellphones, cameras and other items. NPR joined with other media organizations in supporting Carmody's request that authorities be ordered to return his reporting materials.

In stories about Adachi's death, journalists cited a leaked police report that included unseemly details — empty liquor bottles, marijuana gummies and a condom wrapper. The leak, which included police photos from the scene, led some to question whether police officers were trying to damage Adachi's reputation.

Police asked Carmody to disclose who leaked the report, but he refused to say. He told media outlets that he sold the report to three television stations in keeping with his work as a journalist.

But based on remarks that East of the superior court in San Francisco made last week, Burke said it's possible that the judge may not have been aware that Carmody was a journalist before she issued the cellphone warrant — the first of five warrants that various judges eventually issued in the case.

"I don't think [the judge] knew much about him being a journalist, if she knew he was a journalist at all," Burke said.

East has ordered San Francisco police to destroy the information they got through the warrant she issued, setting an Aug. 1 deadline for the agency to certify that it took that step. She also granted a motion to unseal an 11-page affidavit that supported the issuance of the warrant.

That affidavit was unsealed this week; its first mention of Carmody comes after a redacted portion of the report. A police officer named Sgt. Joseph Obidi states:

"I conducted an internet search for Bryan Carmody and located a LinkedIn profile associated to Bryan Carmody which listed him as a 'Freelance Videographer/Communication Manager, USO Bay Area.' Further internet research revealed that Bryan Carmody is not currently employed by any of the news organizations that obtained the death investigation report."

A review of Carmody's current LinkedIn profile shows that in addition to the job title cited by police, the page prominently mentions his work in TV news, including producing content for CNN, Fox News and other media outlets.

The officer added that a web search also found a photo in which Carmody is seen wearing a watch that was "very similar" to one seen on the wrist of a person in media coverage of the police materials.

Obidi said he believed Carmody acquired the police death investigation report from a police officer and then offered it to a local reporter.

In East's order that was released this week, she required police to make one redaction, in a paragraph that contains information about a confidential source.

Similar motions to quash the other four warrants were filed in other courts, with hearings scheduled for later in the summer, according to KQED.

Carmody has had a press pass for 16 consecutive years; it was issued by the chief of the San Francisco Police Department, Burke added.

"None of these warrants should have been issued — they reflect the San Francisco Police Department's callous disregard of the protections the law has long provided for journalists to ensure that they can do their jobs," Burke said.

Under California Shield Law and federal laws, journalists are protected from search warrants that could reveal their sources and information that goes unpublished in the newsgathering process.

San Francisco Police Department Chief William Scott initially defended the searches, saying the department "went through the legal process." He later apologized and said they may have been illegal.

The union representing the city's police officers said Scott knew every element of the investigation and has called for his resignation.

The department pointed NPR to a statement Scott made in May, when he said he contacted outside agencies to conduct an independent investigation into the source of the leak.

The raids have triggered outcry from free press advocates.