Accessibility links
Review: 'The Boys' Is Bloody But Familiar "What if superheroes were evil?" isn't the rich fodder for storytelling the series thinks it is, but some compelling performances keep the show from descending into depressing nihilism. 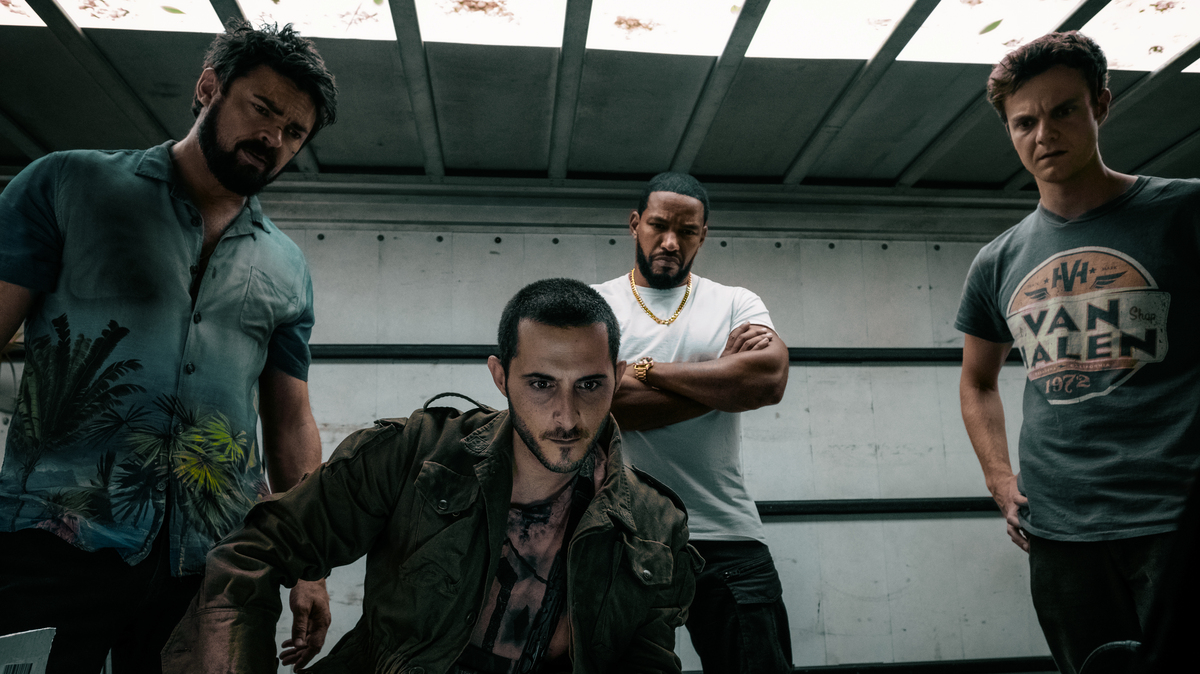 "What if superheroes — but evil?"

"Well, what if superheroes — but corrupt?"

Imaginative! Innovative! ... if it's 1986, when Moore and artist Dave Gibbons created Watchmen, about a cadre of superheroes whose noble ideals curdled into violent nihilism.

Or maybe if it's 1996, when writer Mark Waid and artist Alex Ross chronicled a dark vision of the DC Universe's near future, in which a new generation of spoiled, egomaniacal heroes exhibit wanton disregard for human life in Kingdom Come.

"OK, fine. How about: What if superheroes ... but soulless corporate shills?"

Hilarious! Sharply satirical! Biting! .... If it's 1954, when, in the pages of MAD magazine, writer Harvey Kurtzman and artist Wally Wood turned their satirized versions of Superman and Captain Marvel into spokesmodels emblazoned with corporate logos, spouting slogans for Chesterfield cigarettes.

Which is to say: Amazon's new eight-episode series The Boys — about a team of nonpowered mercenaries determined to take down the world's premier team of evil, corrupt, soulless-corporate-shill superheroes — chooses to play in a sandbox that's seen its share of use. A sandbox that's been sitting out in the sun and rain and wind for decades, filling up with cigarette butts and cat poop and old toys left by previous storytellers, who've hit precisely the same themes.

This is even more true today than it was in 2006, when the comics series The Boys, by writer Garth Ennis and artist Darick Robertson — from which the Amazon show has been adapted, freely — first debuted.

Ennis was following up his sexually explicit, uber-violent and gleefully blasphemous run on the comic Preacher (which has since been made into an AMC series), and set out to make The Boys even more brutal and sadistic. (The series included a superhero who saved the world by aggressively fornicating with an asteroid — so, you know: Mission accomplished?)

The comic series The Boys was part of a movement that had crested in the '90s: comics that ached for you to find their smirky grittiness daring, blithely insolent, even punk; they wanted you to think they were getting away with something. They were, in other words, very 14-Year-Old-Boy. Gruesome depictions of violence were something to be snickered over — the more gory, the more awesome. Violence against women, gay people and minorities was simply a device to demonstrate that the bad guys were very, very bad guys, and to spur the heroes into action.

What The Boys was, at the time — especially if you'd been reading comics for years — was tiresome, more than anything else: Really? We're still doing ... this?

Comics like The Boys eventually got slapped with the rating M for Mature — a word that was understood to apply to their graphic depictions of sex and violence, as opposed to their emotional development.

I'm happy to report that the Amazon series improves on its source material. It does so by taking the comics' lazy inciting incident — the accidental death-by-superhero of the girlfriend of its main character Hughie (Jack Quaid) — and treating it as something more than solely a plot trigger. The series gives Hughie time to absorb, to grieve, to soak in the brutal incident so — even though it is depicted, lovingly, in garish slow-motion — it becomes something more than another nihilistic gag.

That's a hallmark of the show, as it turns out. Where the comic was content to steer headlong into bloody spectacle and smugly snicker, the show serves up the spectacle (on a budget) and then ... takes the time to inspect it, examine it, unpack it. To legitimately honor it, in other words. In its way.

To be clear: The series adheres closely to the comic's over-familiar themes. It's still a show about a greedy, cynical megacorporation duping a gullible populace into fawning admiration of superheroes — which of course demands to be read as a satire of Marvel and Warners. And it likely could be, and would be, if the series managed to sustain a consistent tone, scene to scene. As fun as it is to watch Elisabeth Shue's venal corporate overlord, for example, smiling her icy smile as she verbally dismantles an underling, the show's insistence on making room for broadly adolescent jokes straight from the comic — too many of which involve its Aquaman stand-in The Deep (Chace Crawford) and his romantic attachment to sea creatures — keeps getting in the way.

When the show settles down enough to let its characters interact without bombs, blood and blowhole gags, the cast finds intriguing notes to play. Shue's complicated relationship with Antony Starr's monstrous Homelander — the show's Superman analog — is the show's most intriguing. As the naive hero Starlight, Erin Moriarty radiates grounded, empathetic intelligence as she grows increasingly disillusioned with the role prescribed for her. Her halting romance with Quaid's Hughie, played with sincerity and sweetness, stands in stark contrast with the show's more self-consciously gritty elements.

As the leader of the mercenary group, the appropriately named Butcher, New Zealander Karl Urban chews through a Cockney accent with plenty of growly gusto, if markedly less nuance. Laz Alonso brings deadpan empathy to the underwritten role of perpetually exasperated mercenary Mother's Milk, and as Wonder Woman stand-in Queen Maeve, Dominique McElligott makes the most of a truly horrifying mid-season sequence involving a plane flight that acts as an emotional turning point for her character. She's another actress who gets less screen time than the fish-sex jokes get; she deserves more.

The Boys isn't the bold deconstruction of superhero tropes its creators seem to think it is. (If that's what you're in the market for, the final season of FX's Legion is serving you searingly surreal, philosophically complex, defiantly auteur-driven superhero trippiness every week right now.) And while it doesn't have a lot to say about superheroes that hasn't been said before, it does have some compelling performances, solid effects, more than a few good jokes (a late-season set-piece in which a super-powered baby gets employed as a lethal weapon is jaw-dropppingly great), and plenty of visceral fight scenes ... complete with plenty of viscera.