Accessibility links
In Lebanon, Palestinians Protest New Employment Restrictions The protests were spurred by the closure of two Palestinian-owned businesses amid a larger government crackdown on Syrian refugees. Palestinians make up about 10% of Lebanon's population. 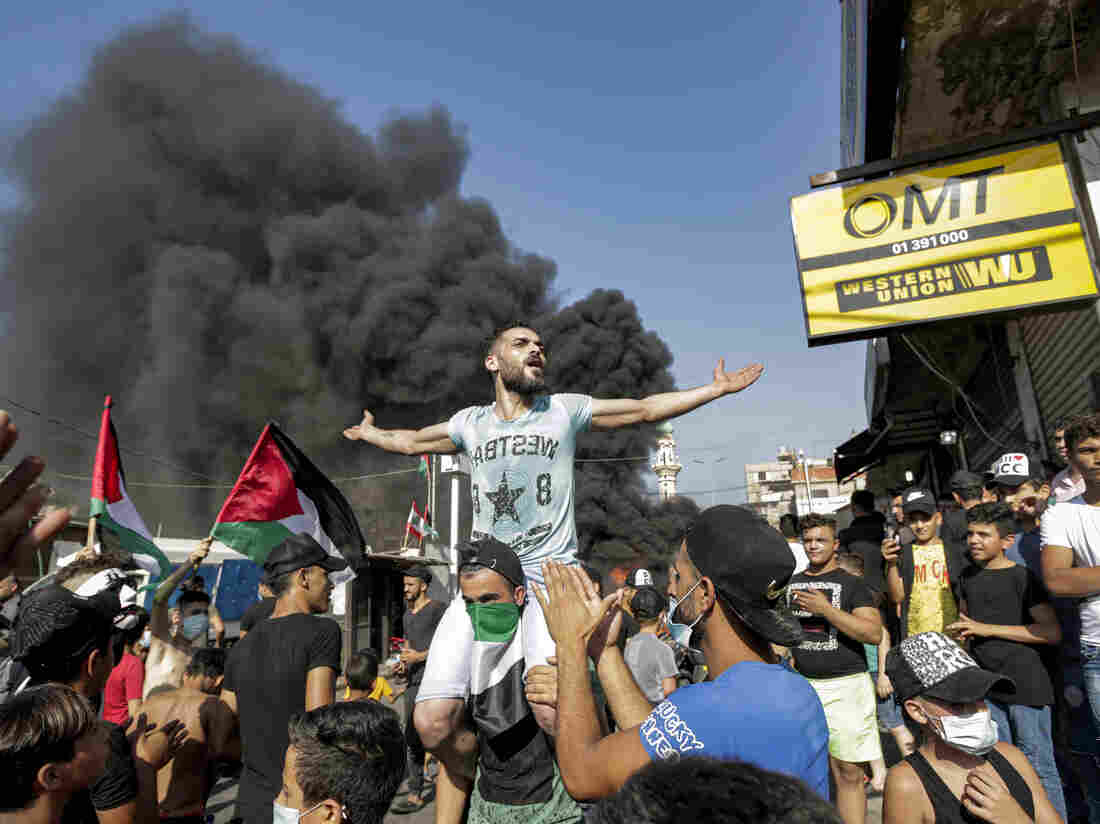 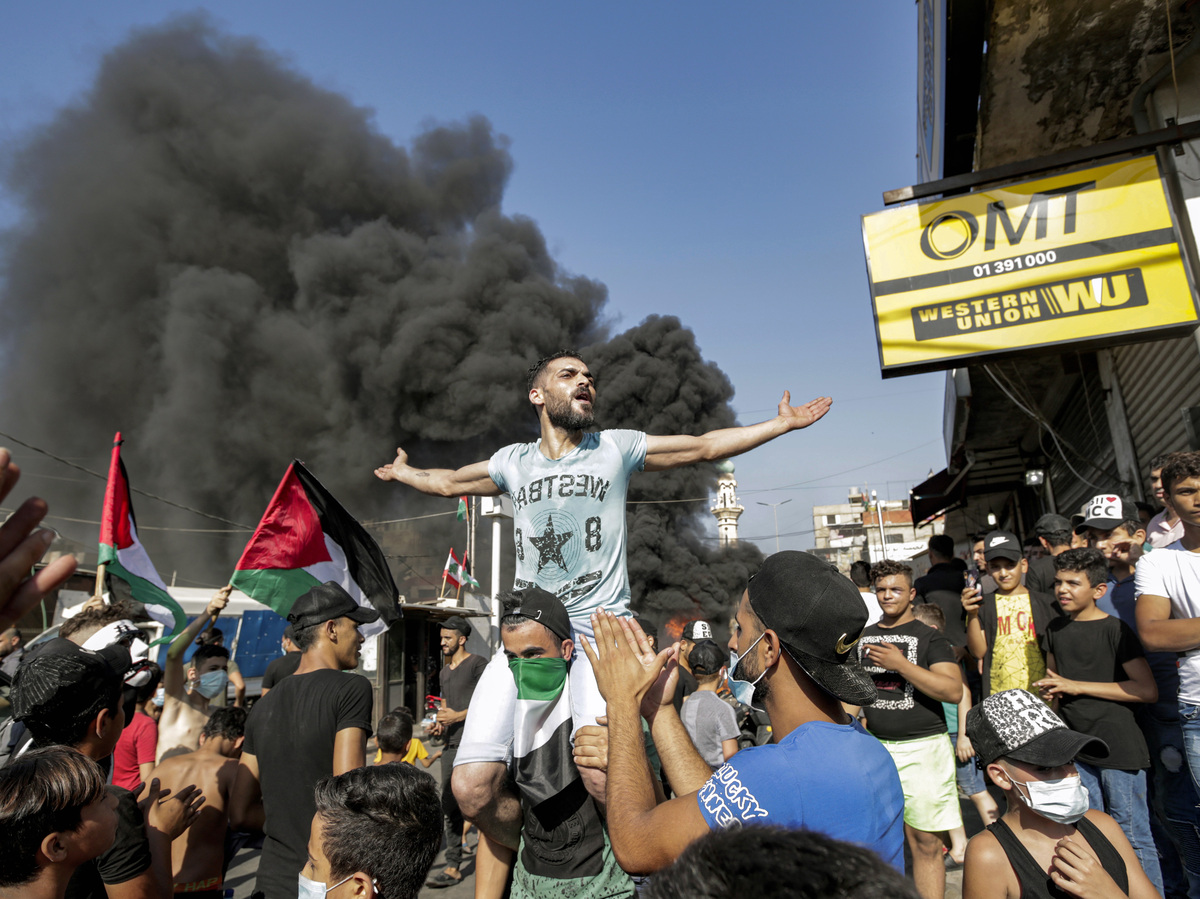 Protesters block the main road outside the Palestinian refugee camp of Burj al-Barajneh, south of the Lebanese capital Beirut, on July 16. The protests are against Lebanese government decision to restrict Palestinians' work opportunities.

The skies above Lebanon have been filled with colorful balloons in recent days. They're not in celebration, but in protest, and bear the message "Enough, we want dignity" scrawled in Arabic in black marker.

In recent weeks, thousands of Palestinian refugees have been holding demonstrations in 12 refugee camps across Lebanon to protest a government crackdown on businesses hiring foreign workers without permits. The demonstrators oppose a new Lebanese labor ministry rule requiring them to have special work permits. Under Lebanese law, everyone who is considered a foreigner must acquire certain paperwork from the Ministry of Labor in order to work.

Palestinians — who were forced out or fled in the war during Israel's creation in 1948, and were not allowed back — now make up about 10% of Lebanon's population. Some 450,000 Palestinians are registered in Lebanon with the U.N. refugee agency that works with Palestinian refugees. Various Lebanese governments have classified Palestinians either as foreigners, refugees or stateless people, even though many were born in Lebanon. Palestinians are generally not granted Lebanese citizenship.

"The laws are so gray ... every time a new labor minister comes to office, we become afraid because they change what it means to be 'Palestinian' here," says Rana Makki, a 27-year-old Palestinian activist and researcher.

Palestinian refugees "are highly marginalized, with two-thirds considered poor or extremely poor," with a high rate of unemployment exacerbated by the arrival of more than 1 million Syrian refugees to Lebanon, according to a 2016 U.N. Refugee Agency report.

Saber Halimeh, a 26-year-old Palestinian journalist who writes for a website covering refugee issues, grew up in the Burj al-Barajneh refugee camp on the outskirts of Beirut. In this loud, bustling camp, which has narrow alleyways lined with dangerous electrical wires, he explains that what spurred these protests — which began last week — was the government closure of two Palestinian-owned businesses amid a larger government crackdown on Syrian refugees.

In June, the Labor Ministry, led by Camille Abousleiman, announced a one-month deadline for companies to acquire work permits for anyone considered a foreigner in Lebanon. Once the deadline expired last week, the ministry began to close or fine businesses that didn't have permits from the government, nearly 600 of them Syrian-run or employing Syrians, and two Palestinian.

"It's clear that they're clamping down on Syrians because they want to send them home. But where would we go? We were born here and have no land to return to," Makki says.

In 2010, labor laws in Lebanon were amended to exempt Palestinian refugees from paying for work permits. However, Palestinian businesses still had to register with the government and pay a quarter of the standard registration fee.

In a series of tweets, Abousleiman denied that the government is targeting Palestinians and has tried to ease tensions by vowing to facilitate the granting of work permits for Palestinian refugees.

But the Palestinian protesters are demanding much more than an overturn of the new work permit rule.

Palestinians in Lebanon are barred from working in more than 20 professions, and their prospects in the labor market are limited to jobs in construction, administrative roles and small crafts.

In the protests, "We're not just asking for the simple right to work anymore, but also to work [in] professions we are banned from, such as medicine, law [and] engineering," Halimeh says.

The protest movement is also asking the Lebanese government to clarify Palestinians' status, he says. "Foreigners come here voluntarily for work or tourism," he says. "We are refugees without a choice or a place to return to."

Halimeh says it is illegal to allow building materials in the camp where he lives, because the Lebanese government wants to discourage Palestinians from staying permanently.

"We cannot own houses outside the camps, ownership of land is difficult for Palestinians in Lebanon, and we also cannot build inside the camps. We are asking to be allowed to at least bring in building materials. Palestinians have been here for 70 years," he says.

The Ain el-Helweh camp, located about an hour's drive south of Beirut, in the city of Saida, has become the symbolic center of the protests, activists tell NPR.

"Inside Ain el-Helweh, there's one of the largest vegetable markets in Saida, and since the protests began, they've put a stop to all Lebanese products entering or leaving the camps," Halimeh says. "They're trying to prove a point that Palestinians aren't a burden on Lebanese society. We actually contribute to the economy in a positive way."

Palestinians have set up a committee to to negotiate with the Lebanese government on ensuring working rights and defining their status as "permanent residents." Until an agreement is reached, Palestinian activists tell NPR they will continue to protest daily.

"There is big fear for my future. I cannot buy an apartment if I want to settle down and get married. No one guarantees my rights in the workforce. I don't have insurance from the workplace," Halimeh says. "It's a dark cloud that constantly hangs above us, creating great worry for what the future will hold."