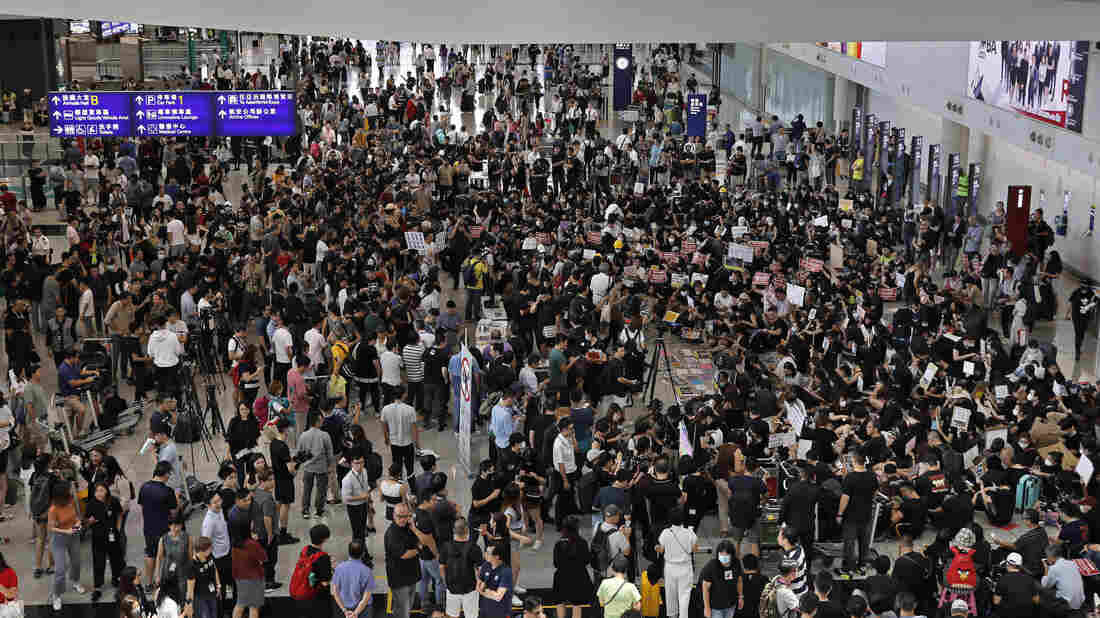 Demonstrators gather during a protest at Hong Kong International Airport, Friday, with the goal of alerting travelers to their call for democratic reforms and the withdrawal of a controversial extradition bill. Vincent Yu/AP hide caption 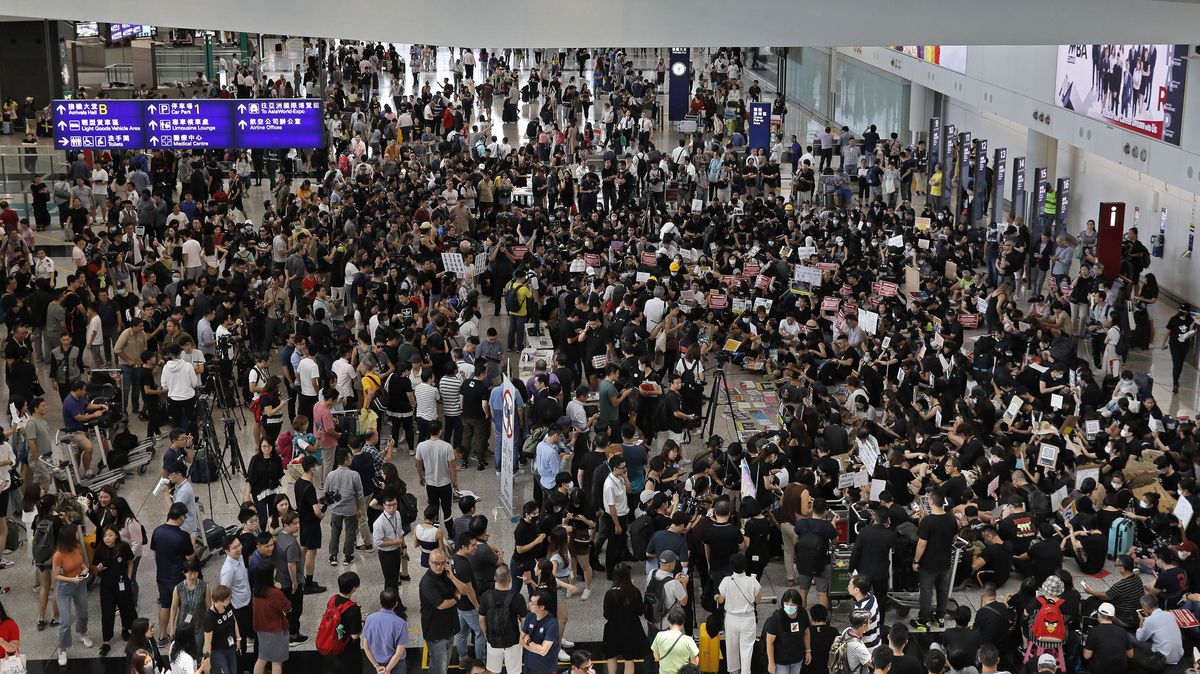 Demonstrators gather during a protest at Hong Kong International Airport, Friday, with the goal of alerting travelers to their call for democratic reforms and the withdrawal of a controversial extradition bill.

Thousands of protesters are occupying Hong Kong International Airport, filling the arrivals terminal of one of the world's busiest airports. Pro-democracy organizers are hoping to take their message to an international audience, in the latest in a string of protests that began weeks ago.

"Now is the summer of discontent, and as a Hong Konger, I am born, I live, and I love my hometown," leading pro-democracy activist Joshua Wong tells NPR. He adds that in Hong Kong, 'we should determine our own destiny instead of the Hong Kong people's future being dominated by Beijing."

Protesters are asking the city to completely withdraw a bill allowing for extradition to mainland China. Their demonstrations have also grown to include demands for the city's chief executive, Carrie Lam, to step down; an investigation into police and gang violence towards demonstrators; and the ability to directly elect the city's leader and some seats on the legislature.

When people arrive at the Hong Kong airport, they are usually greeted by government branding that welcomes them to “Asia’s world city”.

This is what they’ll see today as soon as they leave the baggage reclaim area: pic.twitter.com/7WtkrotZ6n

Recent protests have drawn millions of people to march for protection of civic freedoms in Hong Kong, organizers say.

"When 2 [million] out of 7.5 million people joined the mass protests, it showed the Hong Kong people deserve democracy," Wong said. "We are not afraid of the Communist regime."

China's Foreign Ministry says the protest movement in Hong Kong is driven by foreign influence, and that under Chinese rule, Hong Kong's citizens "enjoy unprecedentedly extensive rights and freedoms in accordance with law," according to China's state-run Xinhua News Agency.

When Britain returned Hong Kong to China 22 years ago, China employed a "one country, two systems" principle, allowing the city to retain its own legal system, currency, and civil service. Since then, fears have grown that Beijing is attempting to subvert that autonomy and erode democratic freedoms and the rule of law in the city. 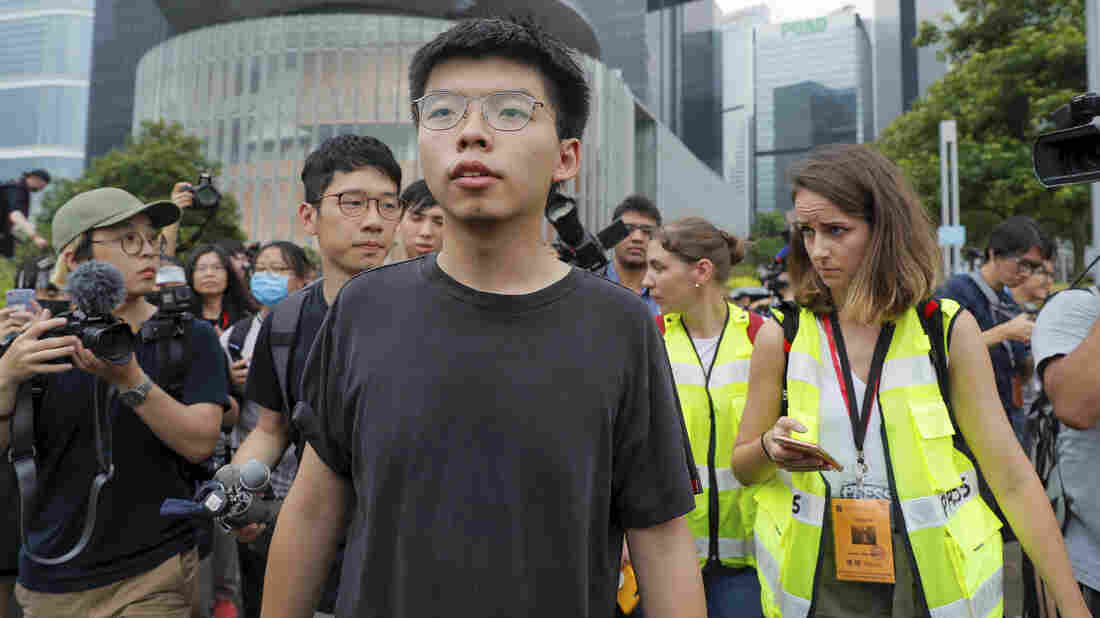 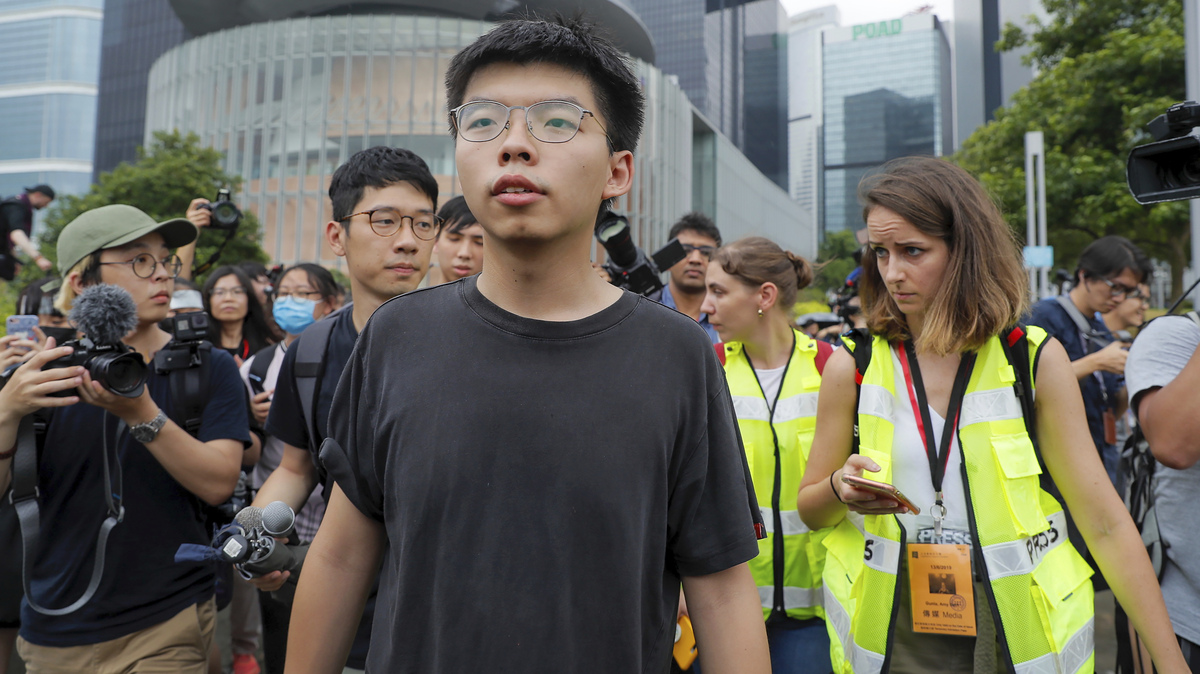 Wong tells NPR he believes the protest movement extends beyond securing protections for the city's citizens: "Under the hardline policy and sharp power expansion of President Xi Jinping, we realize that a victory for Hong Kong, is a victory for the free world."

Saying that the international community should "realize Beijing does not follow and rely on universal values," Wong says this summer's protests are "the most crucial and critical moment in Hong Kong history."

Protesters are planning more marches for this weekend, including near Yuen Long, a district where last weekend, men wearing white T-shirts and carrying batons attacked demonstrators and passers-by on a train and nearby streets.