Accessibility links
Marin Alsop Plays 'Not My Job' On 'Wait Wait... Don't Tell Me!' Marin Alsop is the music director of the Baltimore Symphony Orchestra and the São Paulo Symphony so we know she's a good conductor ... but how will she do on our quiz about conducting electricity? 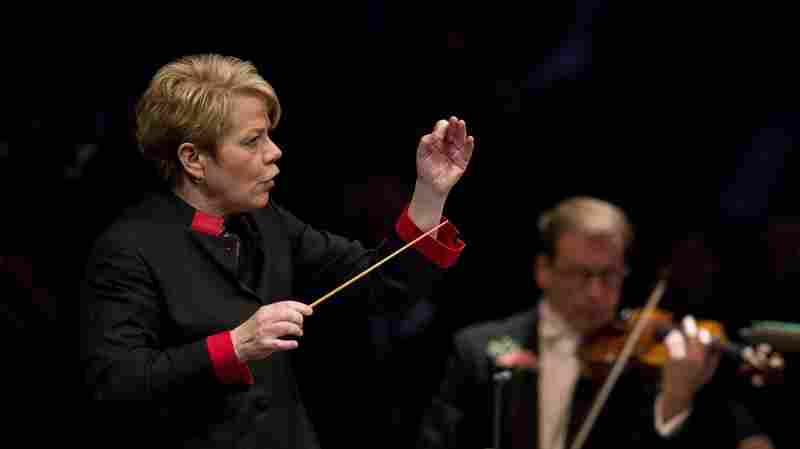 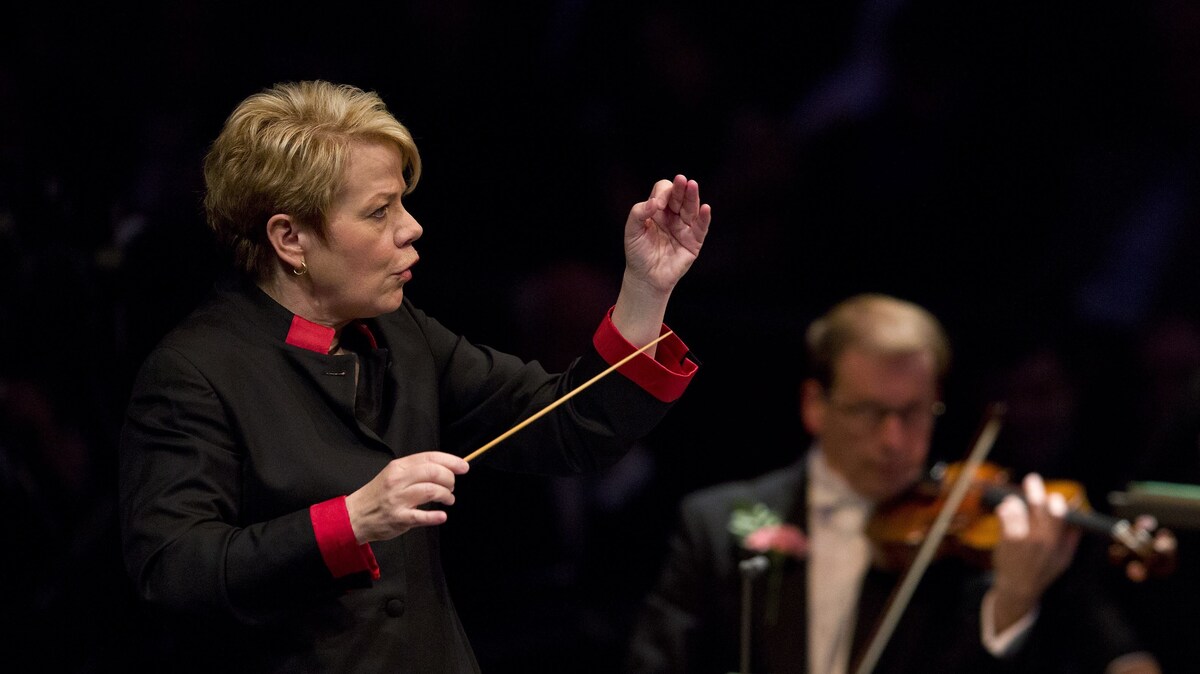 Marin Alsop is the music director of the Baltimore Symphony Orchestra and the São Paulo Symphony so we know she's a good conductor ... but is she a superconductor? We'll ask her three questions about conducting electricity — click the audio link above to find out how she does.

And now the game where we ask pioneers to go discover something completely uninteresting. It's called Not My Job. Marin Alsop discovered her passion for music at an early age. But Juilliard wouldn't admit her to their conducting program, so she just started her own damn orchestra next door, presumably to drown them out.

SAGAL: She's now the music director of the Baltimore Symphony and the Sao Paulo State Symphony. We are delighted to have her with us.

SAGAL: So I always ask sort of musical geniuses like yourself, were you, like, a musical prodigy? Did you have to be forced to practice the piano, or did you love it?

ALSOP: No, I was born with a job. My parents were professional musicians.

SAGAL: Oh, they were.

ALSOP: My dad was a violinist and my mom a cellist, and so they needed a pianist. And so they said, oh, let's make one. So...

ALSOP: So I was born with a job. And really, I hated the piano - hated it. I retired when I was six...

SAGAL: Now, was that because you didn't like the piano or because you just resented your parents' - like, this is why you are here?

ALSOP: Well, how much time do we have now?

ALSOP: No, they tricked me into playing violin. And then I - you know, for every kid, there is a right instrument.

SAGAL: How do you trick a child...

SAGAL: ...Into playing the violin?

SAGAL: I've left some candy inside this odd, wooden object.

ALSOP: It was very close because they said, you want to go to summer camp? You know, and so I already had an archetypal image of summer camp, you know, with sailing and swimming...

ALSOP: ...And horseback riding - somehow horses got in there. And...

ALSOP: They said, oh, before we go, we forgot to tell you you might have to play the violin. And this camp is called Meadow Mountain. It's fondly called the concentration camp for violinists, so that's where they sent me.

SAGAL: And when you got there, they just put you in your little cell...

SAGAL: ...And handed you a violin.

ALSOP: Yeah, the teacher said, so you're going to practice from 8 until 1 every day - five hours. Luckily, I was 7. I had no real sense of time.

SAGAL: And they made you practice your violin five hours a day.

SAGAL: And this was supposedly for pleasure. This was camp.

SALIE: But she was on top of a horse while she was practicing.

ALSOP: The only sport we were allowed to do was pingpong.

ALSOP: And so I am awesome at pingpong.

SAGAL: And is it true - we read that you decided at some point you wanted to be a conductor.

ALSOP: Well, what happened was that after practicing for five hours for eight weeks...

ALSOP: I was pretty good, so I got into Juilliard right after that. But I played in the orchestra, which I loved. And they got some complaints that somebody was trying to lead the whole orchestra from the back of the second violins.

SAGAL: Wait a minute - so they actually brought you into - like...

SAGAL: ...They complain about you?

SAGAL: How do you try to conduct the orchestra from the second violin?

ALSOP: I think the problem was I was having a really good time.

ALSOP: I - like, the timpani guy was really cute back there...

ALSOP: And I was just having fun. And, you know, I was just moving, and everybody else was, you know, already like Stonehenge, and I was busy. And then, luckily, my dad took me to a concert, and I saw the conductor. He came out, and he started talking to me - talking to the audience - talking to me, I thought. And, you know, he was really excited, and then he started jumping around and conducting. And I thought, oh, nobody's yelling at this guy. I could do that, right?

ALSOP: And he was sweating and spitting. And that was Leonard Bernstein.

SAGAL: Why - so you saw Leonard Bernstein. And, I should say, somewhat famously, you became, I guess, what's - student isn't good enough a word - one of his proteges

ALSOP: I did, luckily.

ALSOP: And that was the highlight of my life.

SALIE: How does one become a protege of a conductor? Like, I'm thinking of "Karate Kid," you know? Like, is there a lot of work with the swish of the arm?

SAGAL: Yes, said maestro Bernstein to his student. It's all in the swish of the arm.

SALIE: I guess what's really under the question is that every kid who goes to see a concert thinks he or she can be a conductor, right? The actual movement that you make - forgive me - looks simple. So what is it that goes into conducting?

ALSOP: Oh, my god. These questions - you said they were going to be easy, Peter.

SAGAL: I said my questions were going to be easy.

SAGAL: I said nothing about Faith.

ALSOP: But listen - you know, it's true. It is a lot of it, I think, about who we are as human beings that creates a different sound and elicits a different response. It's all about body language and...

SAGAL: Not only that - and I say this because I'm privileged enough to see you work - something I notice - most people can't see this because of the conductor has their back to the audience. But because music is playing, you cannot shout instructions. You must indicate what you'd like a musician to do through facial expressions.

ALSOP: You have to have a wide range of dirty looks.

ALSOP: Definitely - or encouraging looks, or...

SAGAL: Or maybe just looks like, you're not really going to play it that way, are you? - sort of more like that.

ALSOP: Or also, you know, you have to anticipate. Sometimes people are about to play at the wrong moment, you know, and you have to kind of anticipate - like, preventive conducting, I call it. You know, like...

ALSOP: Don't do that.

SAGAL: Well, Marin Alsop, it is a pleasure to talk to you. But we have, in fact, asked you here to play a game we're calling...

BILL KURTIS: You're A Good Conductor, But Are You A Superconductor?

Bill, who is Marin Alsop playing for?

KURTIS: Lucinda Watson (ph) of Chattanooga, Tenn., who was this month's winner of our smart speaker quiz. You could be a winner, too - just ask you a smart speaker to open the Wait Wait Quiz.

SAGAL: All right, you ready to do this? Here we go, maestro. Lightning rods were all the rage after they were invented in the late 18th century - so much so that they turned up where? A, attached to race horses, hoping they'd give them an extra kick...

SAGAL: ...B, on cannonballs, in the hope that it would attract lightning onto someone's enemies; or C, on top of ladies' hats because they looked cool.

ALSOP: We've got that horseback.

ALSOP: We've got the cannonball.

SAGAL: ...Cannonball - so it'd fly over there, lightning would hit the cannonball, blow up your enemy. Or ladies' hats because they looked stylish.

ALSOP: Yeah, but that would hurt, wouldn't it? The ladies - that could be really dangerous.

SAGAL: Well, ladies had already made sacrifices for fashion.

ALSOP: We're going with the hat.

SAGAL: You're going with the hat. You're all right.

SAGAL: It's amazing, by the way, how you got them all to work together like that.

SAGAL: All right, next question. Electric fences are excellent conductors, of course, but they're not just for farm. Someone once seriously suggested using an electrified fence for which of these uses? A, surrounding a mixed martial arts fighters at the first UFC bout; B, keeping the political press from harassing senators; or C, managing the line - which gets quite extraordinary - at Franklin's Barbecue (ph) in Austin, Texas?

SAGAL: No, it wasn't the barbecue. It was the mixed martial arts.

SAGAL: But I just want to say that I'm glad that you mentioned the barbecue because the only reason I put it in here was that they would hear it and send us some barbecue.

SAGAL: I appreciate the help. All right. You get this last one right, you win. Your last question is about superconductors. These are the remarkable materials that conduct electricity with almost no resistance - very useful in industry and science. In 2010, a group of Japanese scientists made an incredible discovery about superconductors. How did it happen? Was it, A, one of them was picking out ham at the grocery store freezer section, noticed it was colder than the frozen chicken. That led to the discovery that ham makes an excellent superconductor...

SAGAL: ...B, an incompetent lab assistant made contact with two electrical leads, and the current passed through his body with excellent efficiency without harming him, so he now works as a professional superconductor...

SAGAL: ...Or C, the scientists got drunk, dunked a superconductor in booze and discovered that red wine increased its conductivity 62%?

ALSOP: All right, we're going with C. I'm trusting them. They were right...

SAGAL: What happened - they all got drunk, and they were, like, oh, I wonder what are all these boozes? They tried all the boozes in the superconductor, and they got amazing results - red wine increases conductivity of the substance they were using 62%.

Bill, how did Marin Alsop do on our quiz?

KURTIS: Well, she's a winner in our book.

SAGAL: Marin Alsop is the music director of the Baltimore Symphony Orchestra. You can see her this summer at the Ravinia Music Festival outside of Chicago. Dates and more at marinalsop.com.

Marin Alsop, thank you so much for joining us...

SAGAL: In just a minute, Bill talks to his breakfast in the Listener Limerick Challenge. Call 1-888-WAIT-WAIT to join us on the air. We'll be back in a minute with more of WAIT WAIT... DON'T TELL ME from NPR.