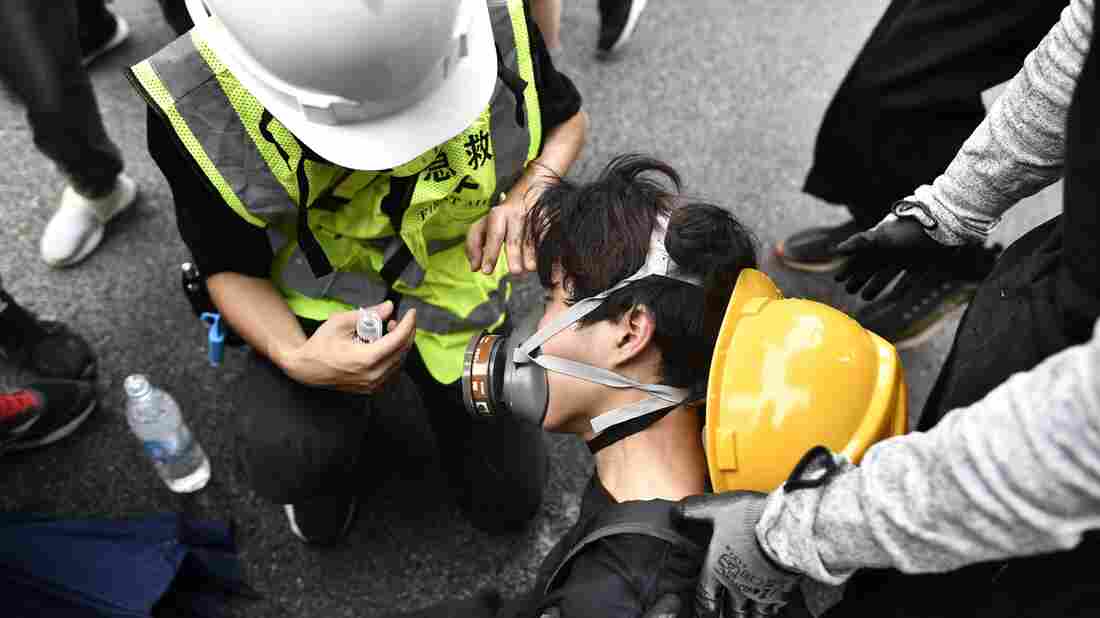 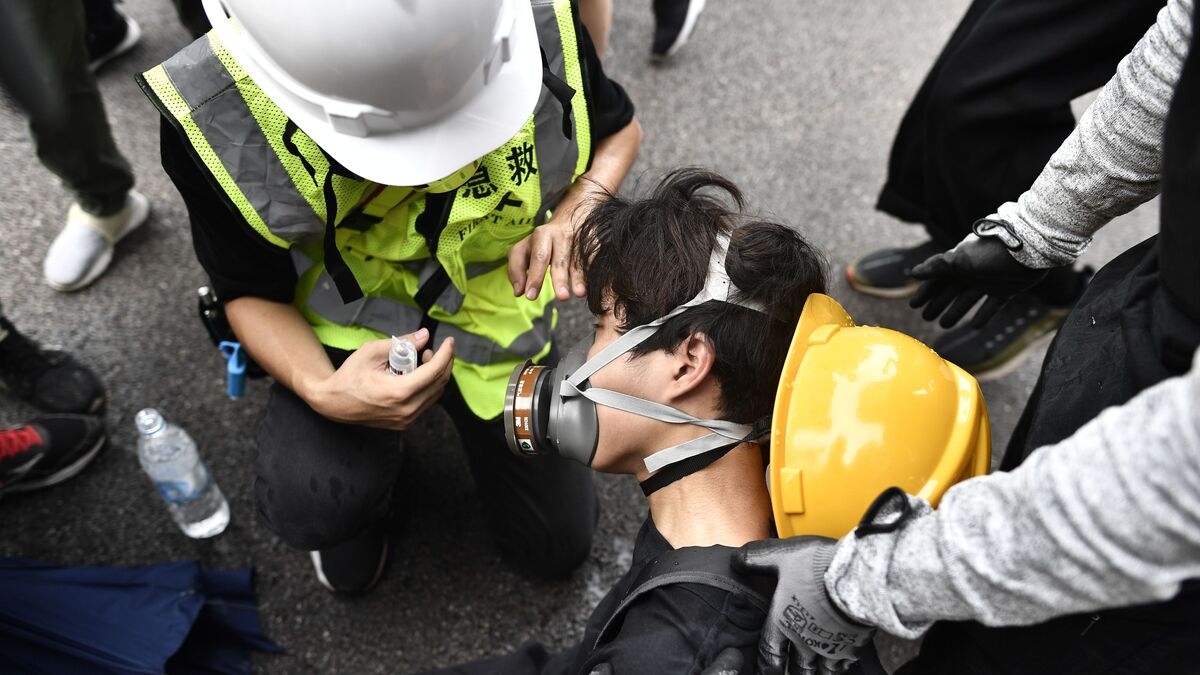 A protester helps a fellow demonstrator after police fired tear gas in the district of Yuen Long in Hong Kong on Saturday. Demonstrators defied a police ban to rally.

Protesters in Hong Kong defied orders to not demonstrate on Saturday, gathering to denounce the police and government in an area where pro-democracy activists were attacked last weekend.

Protesters swarmed a major road in the district of Yuen Long clutching umbrellas to shield themselves from police cameras and tear gas that was later used against them at various sites along the route of their march.

The rally stemmed from an attack last Sunday at a train station in Yuen Long that left dozens of locals and pro-democracy activists wounded. The masked assailants, who wore white shirts and carried clubs, are suspected of having ties to organized crime groups known as triads.

On Saturday, the standoffs between police and protesters resulted in blocked roads and canisters of tear gas being fired. Police officers tried to disperse crowds on Castle Peak Road, Hong Kong's longest road, and outside of a village where protesters had marched toward a police line.

Roy Kwong, a leading pro-democracy lawmaker, accused the police of firing tear gas near a home for the elderly, according to Hong Kong Free Press.

The demonstrations appear to have started peacefully, as one prominent protester, the singer Denise Ho, autographed hard hats for smiling demonstrators. A protester strung an anti-police banner outside of the Yuen Long police station and "a very friendly policeman came out of the watch tower to tell him to be careful not to fall," said Hong Kong-based writer and lawyer Antony Dapiran.

At the Yuen Long train station, funeral bouquets were placed on the ground for Carrie Lam, Hong Kong's chief executive whom critics call "Beijing's puppet," and Stephen Lo, the police commissioner. Chants of "Reclaim HK! Revolution of our time!" could be heard as people moved through the station.

As the day wore on, the Hong Kong government warned people to leave Yuen Long, saying that some protesters were hurling bricks, carrying iron poles and blocking roads with fences.

The Hong Kong Police Force said that officers would disperse demonstrators from Yuen Long, but that protesters remained at the train station. They said a maximum penalty of five years in prison could be imposed on protesters. 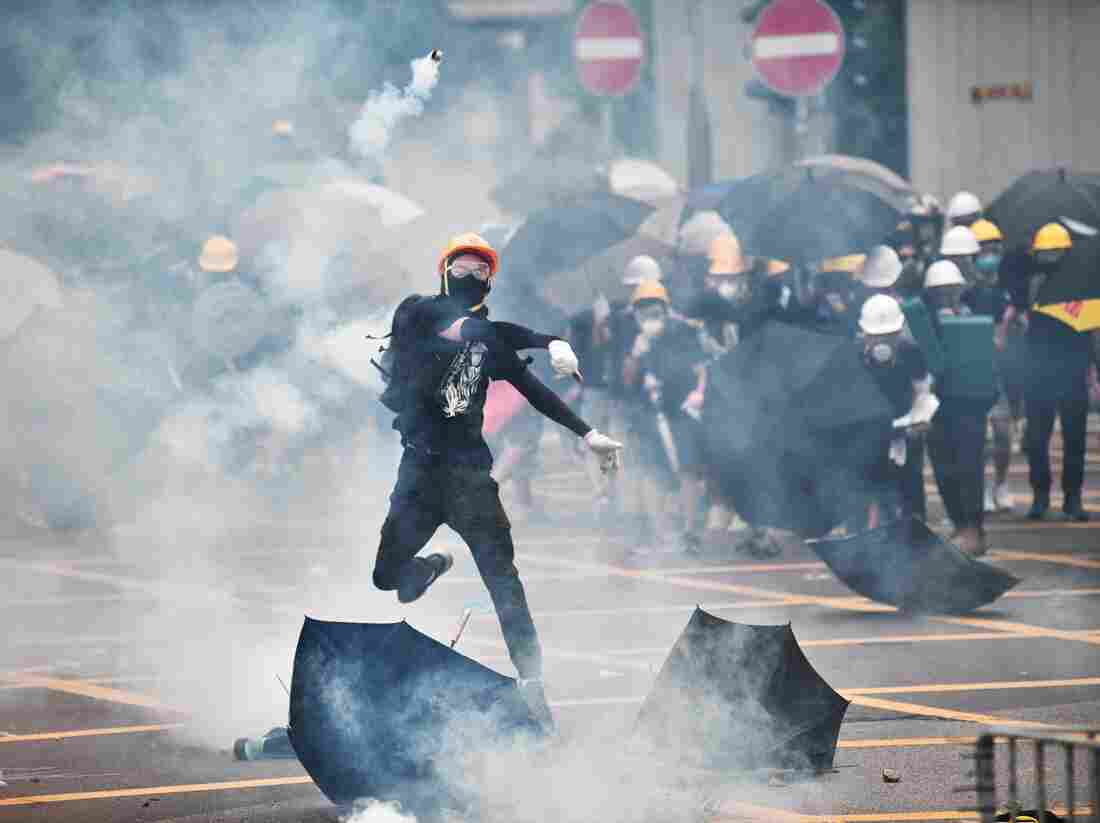 Faceoffs between protesters and police broke out during a demonstration in the district of Yuen Long in Hong Kong on Saturday. Anthony Wallace/AFP/Getty Images hide caption 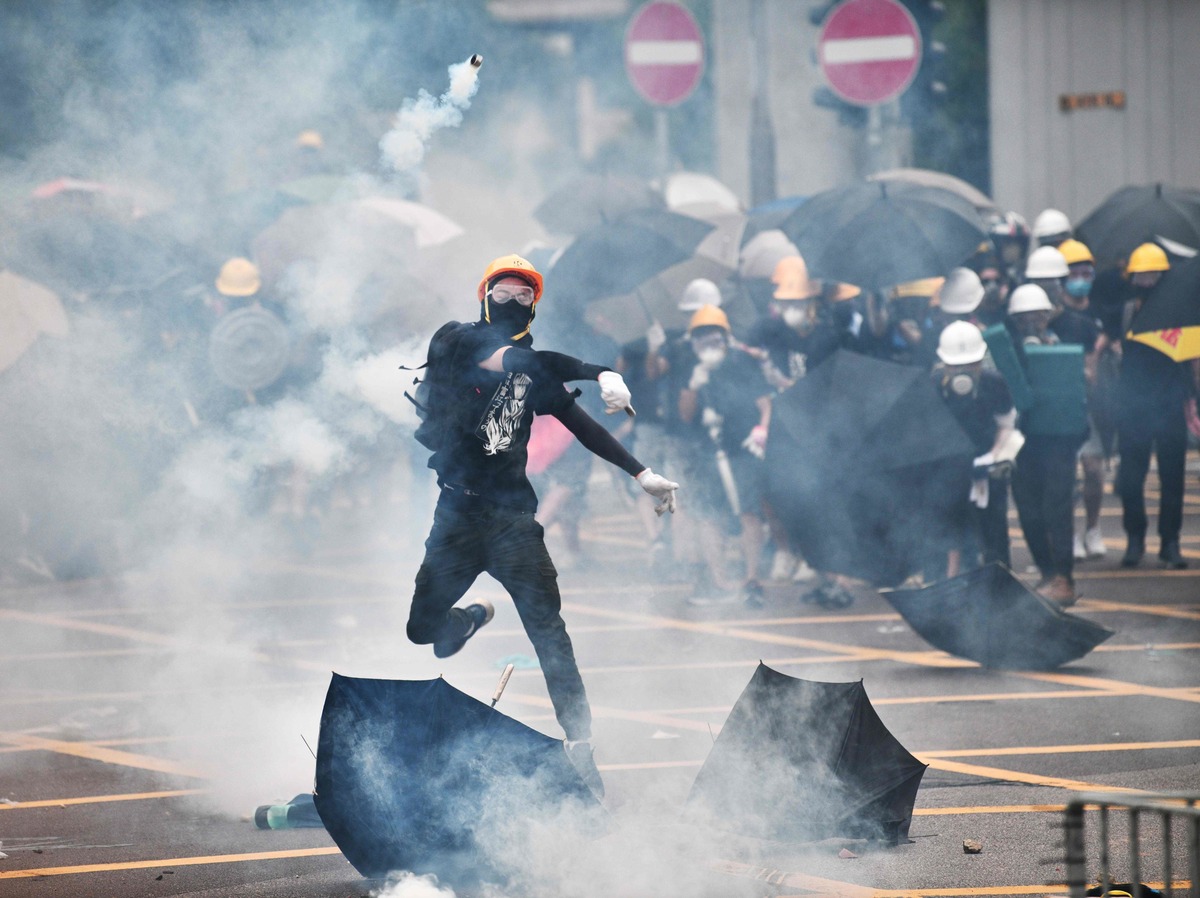 Faceoffs between protesters and police broke out during a demonstration in the district of Yuen Long in Hong Kong on Saturday.

Washington Post reporter Shibani Mahtani told NPR that both protesters and police appeared to be digging in, with people "basically pulling up bricks from the sidewalk" and arming themselves with iron rods and makeshift shields from wood found nearby.

Mahtani said that children and elderly people participated in the rally, but that protesters were predominantly young and appeared ready to "suit up" and "start essentially building weapons."

One of the protest organizer's, Max Chung, told Radio Television Hong Kong that he was "not concerned about my safety, but of course, I am concerned about everyone else's safety."

Protesters reportedly circumvented the police's orders not to assemble, using social media channels to organize under the pretext of a "full-gear shopping day" and playing Pokémon Go in the area.

The police also banned a protest scheduled to take place Sunday in Sheung Wan, a lively neighborhood known for shopping and traditional Chinese medicine shops. Police said they denied the authorization because of public safety and order concerns, according to the Hong Kong Free Press.

On Friday, as part of a summer racked by protests, thousands of people filled the arrivals terminal of the bustling Hong Kong International Airport, demanding change. 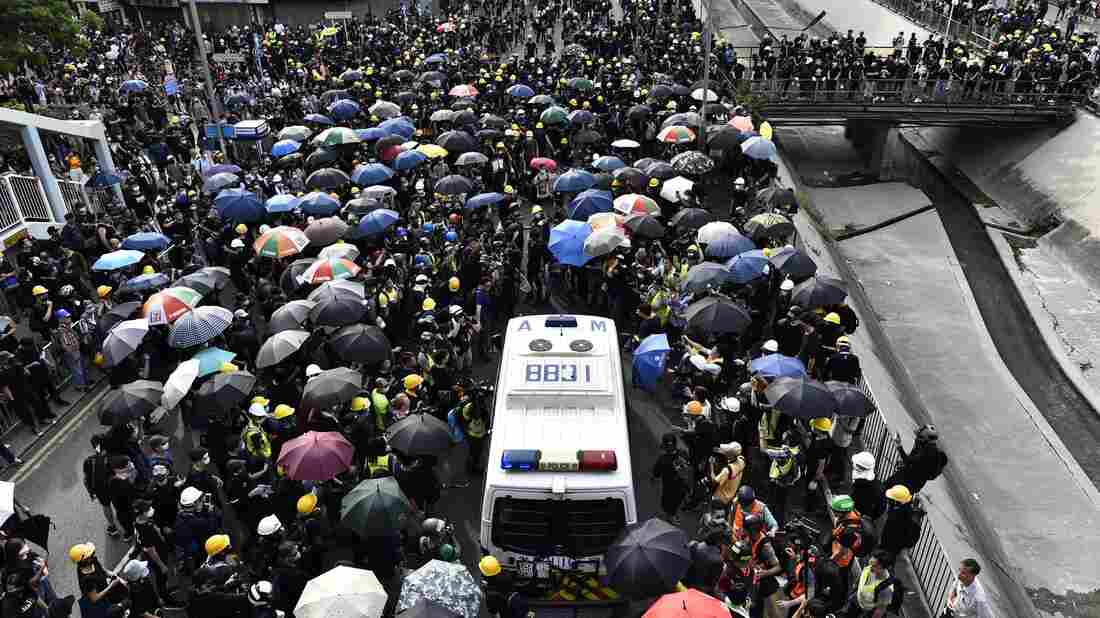 A crowd of protesters blocks a police van during a demonstration on Saturday. Anthony Wallace/AFP/Getty Images hide caption 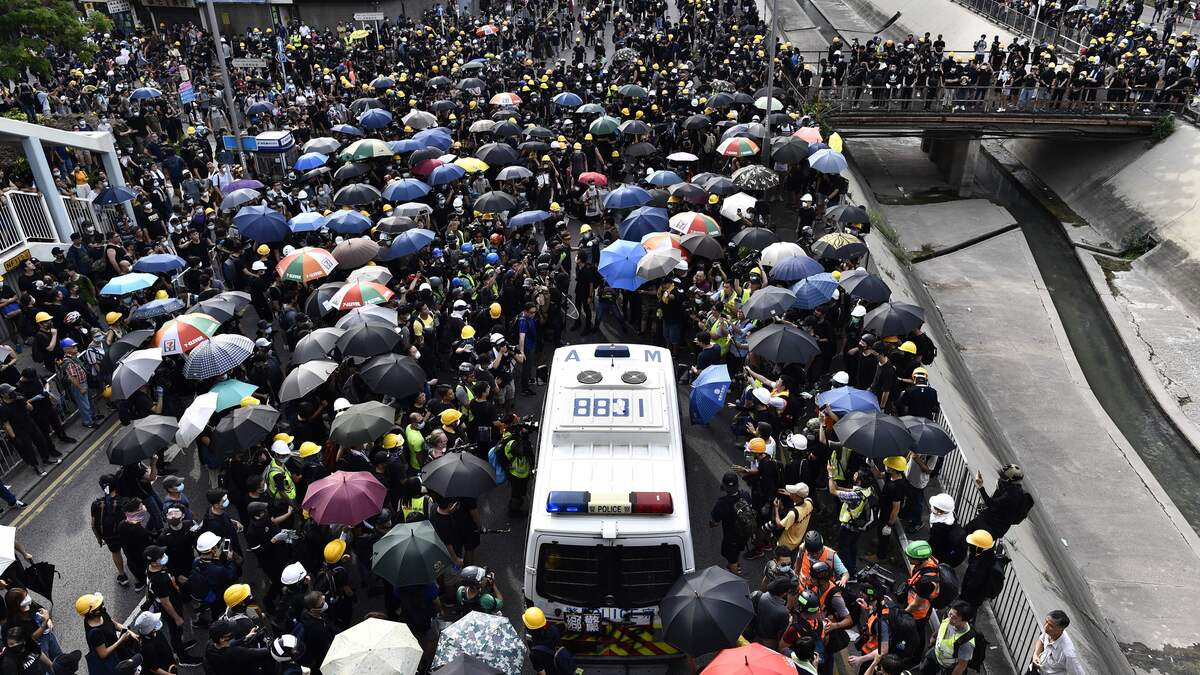 A crowd of protesters blocks a police van during a demonstration on Saturday.

The original protests started in response to a bill that would have allowed extraditions to mainland China, prompting fears that vocal Hong Kong activists would face prosecution in courts controlled by Beijing's Communist Party. Hong Kong's embattled chief executive has since declared the bill "dead," but she has refused to formally withdraw the measure.

After weeks of protests, the demands of demonstrators have expanded. They have called for an independent inquiry into the police's use of force at rallies and condemned the authorities for what they decry as a sluggish response to Sunday's attack at the train station. Protesters have also pushed for the right to directly elect their leaders, who must now be approved by Beijing.

Lo, the police commissioner, told reporters that officers were slow to respond to last weekend's attack because nearby stations were closed during the protest and police needed to "redeploy manpower from other districts." He vowed to bring the offenders to justice and denied accusations that the police had worked with triads to target anti-government protesters, according to Reuters.

The recent unrest has also prompted a new contingent of protesters — those who are coming out to support the police and Beijing.

In China, one of the country's most popular television shows denounced the protest on Saturday and blamed "external forces" for causing chaos, according to the South China Morning Post. Beijing also reportedly blocked mainlanders' access to international news sites, denying them a chance to hear the voices of people fighting for democracy in Hong Kong.

Once a British colony, Hong Kong was returned to China in 1997 under a "one country, two systems" framework. Under Hong Kong's Basic Law, the city is guaranteed "a high degree of autonomy" for 50 years. But fears of encroachment on democratic institutions have grown.

This week, China's Defense Ministry spokesman, Wu Qian, told reporters that the Chinese military could be deployed to Hong Kong to maintain public order if Hong Kong asks the central government for help.

A government spokesperson for Hong Kong said authorities would not turn to the Chinese army for assistance because they were fully able to maintain order and deal with local affairs.