Accessibility links
Review: 'Marilou Is Everywhere,' By Sarah Elaine Smith Sarah Elaine Smith's debut novel, about a girl from an impoverished, broken family who impersonates a missing neighbor in order to get motherly attention, is otherworldly in its beauty and power. 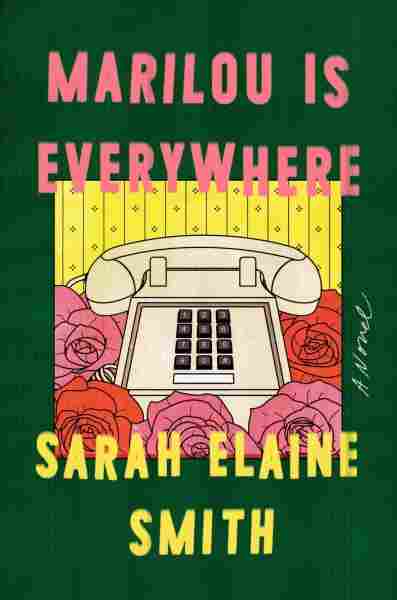 Cindy, the 14-year-old narrator of Sarah Elaine Smith's Marilou is Everywhere, wants to disappear. The girl feels suffocated by her lonely, poverty-stricken existence in rural southwestern Pennsylvania, particularly after her single mother has left for an indeterminate amount of time, trusting her two older brothers to take care of her. "My life was an empty place," Cindy reflects. "From where I stood, it seared on with a blank and merciless light. All dust and no song."

When another teenage girl from her county disappears under mysterious circumstances, Cindy sees a chance to slip into the life she's always wanted for herself. Her actions, and their fallout, form the basis of Smith's remarkable book, one of the strongest debut novels to come along in years.

Cindy's life was bad enough before her mother took off, and it goes from bad to worse when she's left in the custody of her brothers. The three siblings "turned basically feral," with Cindy ditching school and her brothers trying to make ends meet mowing lawns. She can't stand the tedium of life in the middle of nowhere, and is sick of fighting off her brother Clinton's attempts to touch her inappropriately.

Cindy is shocked when she learns that one of her neighbors, a teenage girl named Jude, has gone missing after driving back from a camping trip with friends. The townspeople whisper that the missing girl must have gotten mixed up with drugs or something worse — Jude is biracial, one of the only people of color in a town with more of its share of white racists. Jude's disappearance hits Cindy hard; the girl used to date her brother Virgil. Cindy finds herself jealous of Jude: "I wanted all the hidden hearts to search for me. I wanted to sparkle in the vast outline of the gone, because the gone took up the whole sky and air. ... Gone was a place where nobody could touch you. Like a heaven, or that's what I thought."

For The 'Nickel Boys,' Life Isn't Worth 5 Cents

The arc of Cindy's life changes forever when she tags along with Virgil to Jude's house, where her mother, Bernadette, is at loose ends. Wealthy, alcoholic and seriously unwell, Bernadette "had apparently advanced on the shores of not this world completely" — she's suffering from a brain-related illness which her drinking has exacerbated. When she meets Cindy, she becomes convinced that Cindy is Jude, a delusion that Cindy impulsively decides to encourage, preferring Bernadette's company to that of her brothers.

Cindy suspects that her play-acting is morally unacceptable, but desperate for attention from a mother figure, she rationalizes her deceit, admitting at one point that it's "a parlor game," while also justifying it: "I stood in a place where Jude was supposed to be, at least. And this, I thought, was a kindness." Smith never moralizes in Marilou is Everywhere; she understands the flaws that make everyone — especially those who have been beaten down the world — human.

Fiction debuts this accomplished don't come along very often at all, and 'Marilou is Everywhere' proves that Smith is a writer of immense talent and rare imagination.

It can be difficult for a writer to describe a longing for something unknown and the sometimes reckless actions people take in search of it. Smith does a beautiful job articulating this desire that Cindy has, and explaining why she finds herself unable to stop searching for it, even as her life — and Bernadette's — slowly fall apart: "Even I could see how dreadful my life was, but something about its ragged elements had combined in a way that was refreshing and funny and so much my own that I could eat it up and never be gotten at."

Marilou is Everywhere is a novel of stunning emotional intelligence, and Cindy an unforgettable character, but it's Smith's writing that's the real star of the book. Her language is hypnotic and enchanting, with lines that read like poetry:

Nearly every page of the novel features a breathtaking turn of phrase; the book is almost otherworldly in its beauty and power.

Fiction debuts this accomplished don't come along very often at all, and Marilou Is Everywhere proves that Smith is a writer of immense talent and rare imagination. Her voice is nothing short of angelic, and this novel reads like a miracle.