Accessibility links
Kamala Harris Releases 'Medicare For All' Plan With A Role For Private Insurers The plan clears up confusion over Harris' position, allowing private Medicare plans that follow certain standards. New taxes would be added on stock trades and households earning over $100,000. 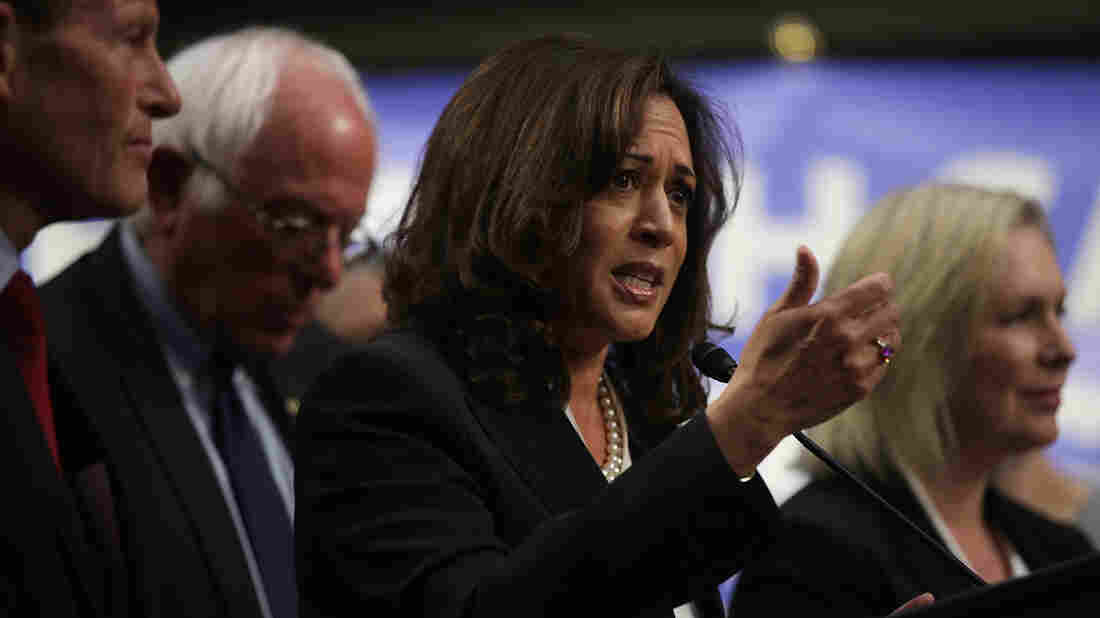 Sen. Kamala Harris, D-Calif., co-sponsored Vermont Sen. Bernie Sanders' "Medicare for All" bill, along with several other 2020 candidates, when it was released in 2017. Her plan has some key differences from Sanders', including a larger role for private insurance and a higher threshold for taxing household income. Alex Wong/Getty Images hide caption 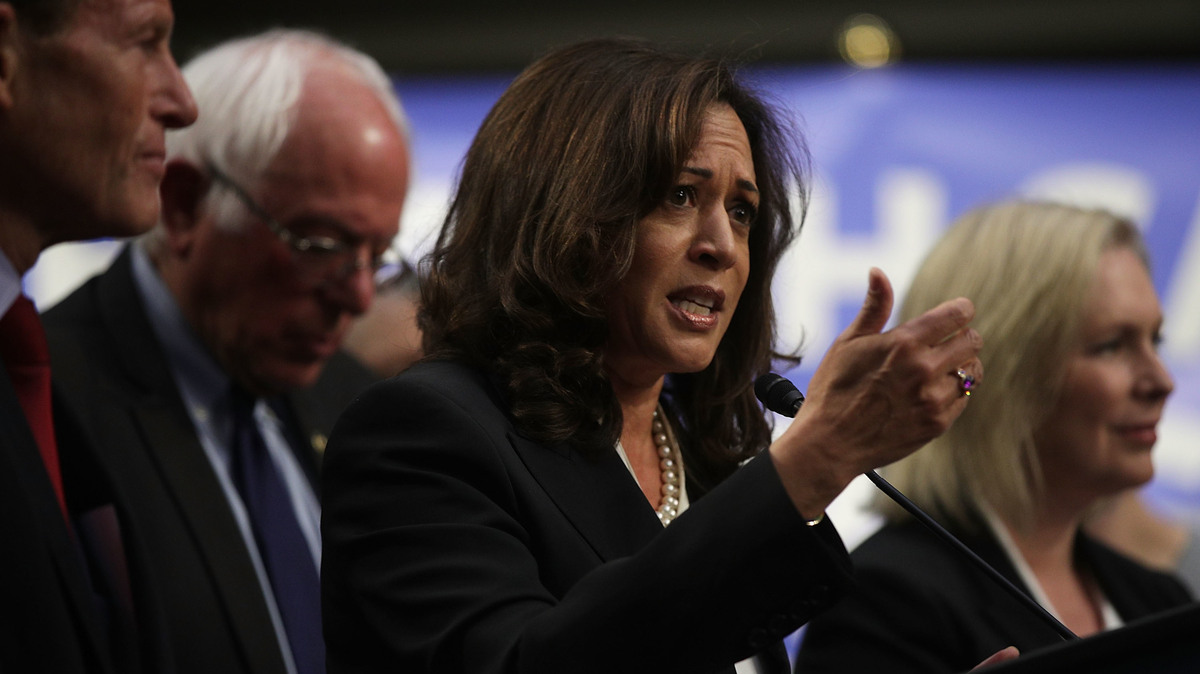 Sen. Kamala Harris, D-Calif., co-sponsored Vermont Sen. Bernie Sanders' "Medicare for All" bill, along with several other 2020 candidates, when it was released in 2017. Her plan has some key differences from Sanders', including a larger role for private insurance and a higher threshold for taxing household income.

California Sen. Kamala Harris has released a health care plan just in time for the second Democratic debate, offering a role for private insurance in a "Medicare for All" system and outlining new taxes to pay for it.

The plan comes after months of questions about whether she supports scrapping private insurance — and as former Vice President Joe Biden appears to be gearing up to attack her at the upcoming debate on her support for Medicare for All.

To review, Bernie Sanders' single-payer health plan is called "Medicare for All," and Kamala Harris is a co-sponsor on that plan (along with several other presidential candidates, including New Jersey Sen. Cory Booker, New York Sen. Kirsten Gillibrand and Massachusetts Sen. Elizabeth Warren). His plan would cover all Americans with a government-administered health care plan.

While Harris has co-sponsored Sanders' plan, she has also diverged from Sanders' vision on the campaign trail, most notably on the role of private insurance.

Here are how some key elements of the Harris proposal match up.

Private insurance: Under Harris' plan, private insurance would have a bigger role than under Sanders' plan. Harris envisions a system like the current Medicare system, in which people can either purchase government-administrated Medicare plans or buy Medicare plans from private companies — an option known as Medicare Advantage.

That's a big difference from Sanders' plan, under which any insurance that duplicates the coverage provided by his Medicare for All system would be banned. As his version of Medicare for All is very expansive (covering dental and vision, for example, in addition to more basic medical care), that would mean a tiny role for private insurance.

Harris says there would still be room for employer-sponsored coverage under her plan. After a 10-year transition period (more on that below), employers could still offer insurance, according to her campaign. They would, however, have to get those plans certified as Medicare plans through the government to meet certain standards, including cost and quality of coverage.

New taxes: One key revenue-raiser Sanders has proposed for Medicare for All is what his plan calls a 4% "premium" on household income over $29,000. Harris' plan would impose that tax only on households earning more than $100,000, and would also raise even that threshold for households in "high-cost areas."

To add to that revenue, Harris proposes taxes on financial transactions such as stock and bond trades.

Transition time: Bernie Sanders' plan calls for a four-year transition to his single-payer system. Harris would have a 10-year transition, and both would allow a public option, where Americans below age 65 could buy into the government's Medicare program in the first year.

This comes with costs and benefits. On the one hand, it's a more extended time to make a big transition in how America does health care; on the other hand, a 10-year phase-in window necessarily means counting on the transition to continue smoothly under the next president — whichever party he or she might come from.

Details: Sanders already has legislation introduced on Capitol Hill, whereas Harris has released a broad outline of her plan. Key details — for example, more exact information on what that 10-year transition would look like — still don't exist.

One area that will most definitely get plenty of scrutiny is costs, both in the aggregate and individually. Among the unanswered questions in Harris' plan: How much will the plan ultimately cost, and will those tax hikes cover it? And would this bring American health costs down overall? Harris says it would, but her initial plan did not offer detailed figures to explain how.

On top of that, individuals are going to want to know whether their total health care costs — counting any premiums and taxes — under this plan would be greater or less than their current health care costs. And health care providers are similarly going to wonder how much they will be paid through the plan — one of the biggest questions surrounding Sanders' Medicare for All plan.

And then there are the political questions that Harris' plan raises: Were she the nominee, would her plan — not exactly a single-payer plan — satisfy single-payer purists? Would it be too big of a change for people who favor a more moderate approach? And, of course, could it pass Congress?

Setting up the next debate

The new Harris plan at least partially answers one question that has been looming over her campaign for months: How much of a role should private insurance have? In January, in response to a question at a CNN town hall about private insurance, she said she wanted to "eliminate all of that." But then she later said she would favor some form of "supplemental" private insurance.

Similarly, in the last Democratic debate, she raised her hand to a question about whether she would support the elimination of private insurance, but then later said she thought the question referred to her own personal insurance.

This plan also places Harris in the spectrum of policy reforms that Democratic candidates have put forward. Her plan is less drastic (and with a less drastic timeline) than Sanders' plan, but could mean much bigger changes than, for example, a public option plan like those that Biden, South Bend Mayor Pete Buttigieg and former Texas Rep. Beto O'Rourke favor.

Biden has ramped up his criticism of Harris now that her plan is out. In a statement released Monday afternoon, Biden deputy campaign manager Kate Bedingfield called Harris' plan a "have-it-every-which-way approach" that is "a Bernie-Sanders-lite Medicare for all." Bedingfield also echoed a criticism Biden has leveled in recent days, saying that she doesn't believe Harris' plan can work without raising taxes on the middle class.

In their last debate matchup, Harris attacked Biden harshly over his past opposition to federally mandated busing. The two will share the stage again on Wednesday night, the second night of this week's debate. Biden has promised he's "not going to be as polite" this time.