Accessibility links
Gilroy Garlic Festival Shooting: Boy, 6, And Girl, 13, Among The Victims In California "He was joyful, always wanted to play, always positive," Alberto Romero said of his 6-year-old son, Stephen. Police say the gunman got an AK-47-style rifle into the area by cutting through a fence.

Gilroy Garlic Festival Shooting: Boy, 6, And Girl, 13, Among The Victims In California

Gilroy Garlic Festival Shooting: Boy, 6, And Girl, 13, Among The Victims In California 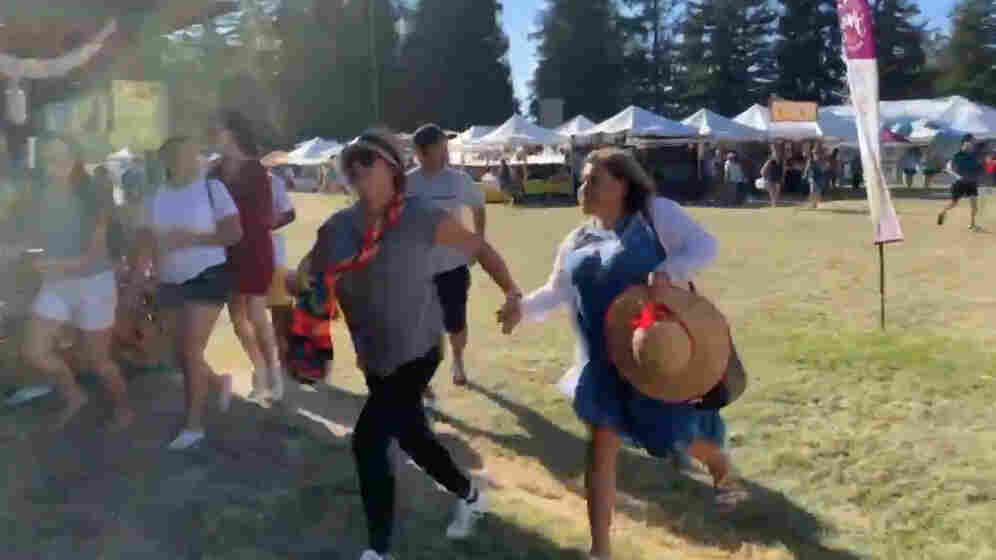 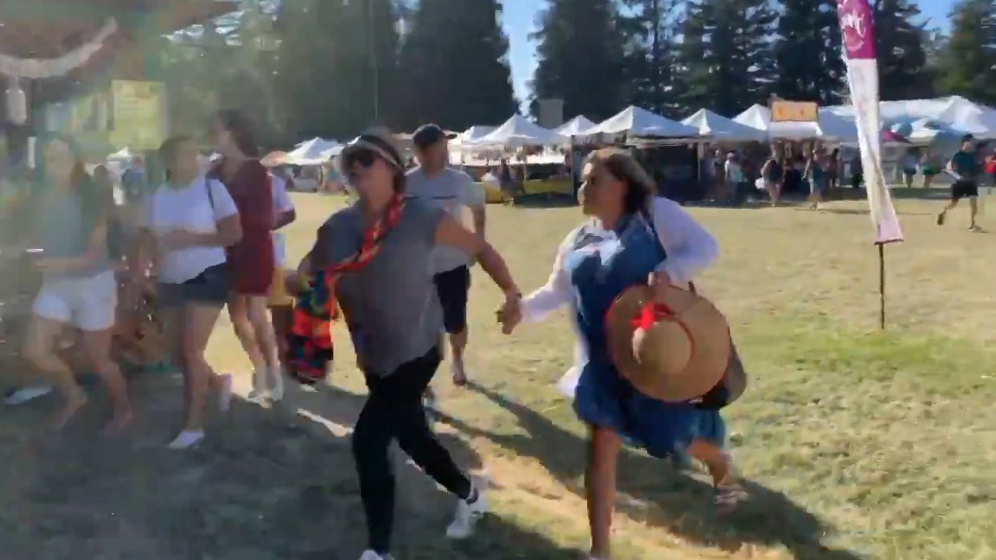 People run for safety after a gunman opened fire at the Gilroy Garlic Festival, south of San Jose, Calif., on Sunday.

Two children — a 6-year-old boy and a 13-year-old girl — and a man in his 20s were killed when a gunman with a rifle opened fire and sprayed bullets seemingly at random Sunday at the Gilroy Garlic Festival in Northern California.

"Any time a life is lost, it's a tragedy. But when it's young people, it's even worse," said Gilroy Police Chief Scot Smithee, at what was at times an emotional news briefing Monday.

Smithee identified the shooter as 19-year-old Santino William Legan, who was killed by police, bringing the death toll to four. More than a dozen people were injured.

The police chief said the gunman had used "an SKS/AK-47 type assault rifle" that had been legally purchased in Las Vegas on July 9. Smithee later added that Legan was a Gilroy native who also had ties to Nevada.

Authorities said Monday afternoon they had located the car the suspect drove to the site and were searching it. They also said search had been conducted at a residence in Gilroy.

"We did have reports of a potential second suspect," Smithee said. "We don't have any confirmation that any second suspect did any shooting."

Discussing the possibility that reports of a second suspect may have been erroneous, Smithee said, "We really don't know. We've gotten multiple reports that there may have been another person with him, that they ran this way, or they ran that way. But different people give different versions."

"Mass gun violence is an epidemic in the United States," Gilroy Mayor Roland Velasco said at Monday's briefing. "And yet one never imagines such a thing can happen here, in our beautiful community."

The gunfire began on the north side of the festival grounds at around 5:41 p.m. local time. It was the third and final day of the annual garlic celebration that the town of Gilroy, some 80 miles south of San Francisco, has hosted for decades.

Officials have not released the names of all the victims, but the Santa Clara County Coroner confirmed that 6-year-old Stephen Romero had died.

The boy's father, Alberto Romero, told the Mercury News newspaper that he rushed to the Santa Clara Valley Medical Center to check on his family Sunday night after getting a frantic call from his wife. His son had been shot in the back.

"He was joyful, always wanted to play, always positive," Romero said of his son, who was to start first grade at the end of the summer.

Stephen Romero had been at the festival with his mother and grandmother; both of them were also shot and were being treated at the hospital, Alberto Romero told the Mercury News.

"This morning our prayers are with the families of those injured and killed in this senseless shooting," Mayor Velasco said.

Describing how the gunman managed to get a rifle into the festival, Smithee said it appears that "they used some sort of a tool to cut through the fence" near a creek that borders a parking area. 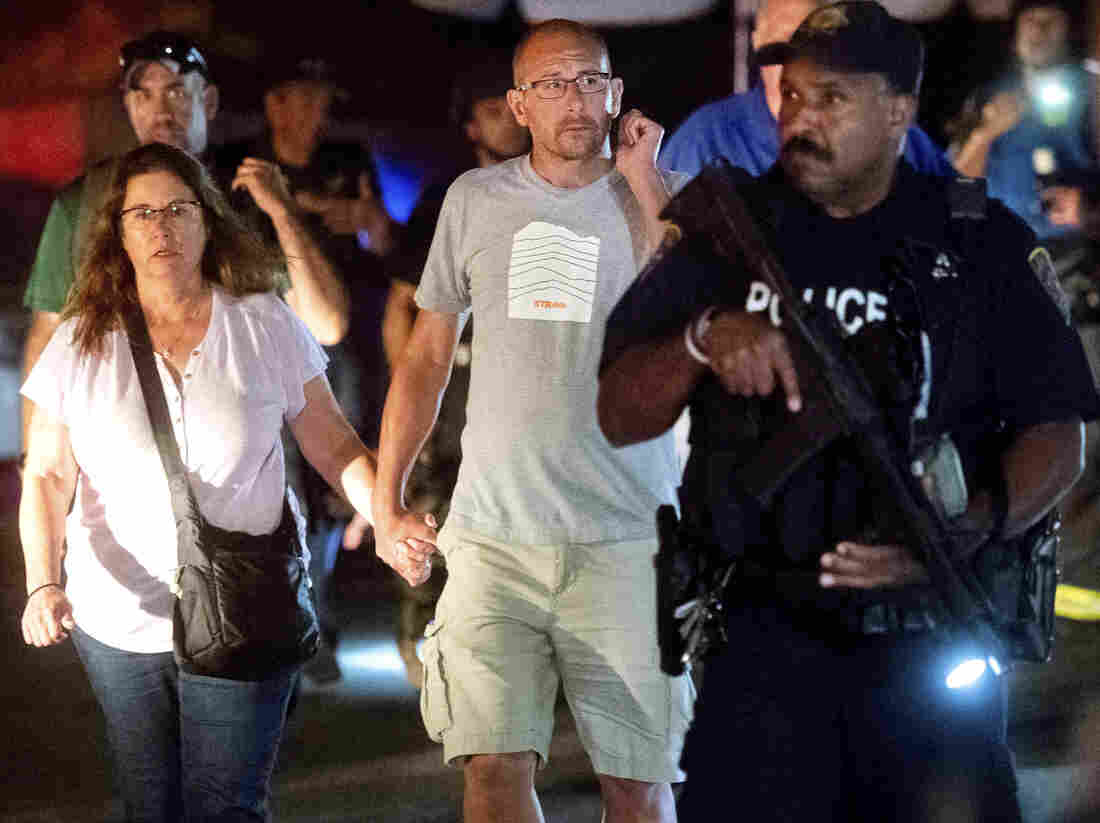 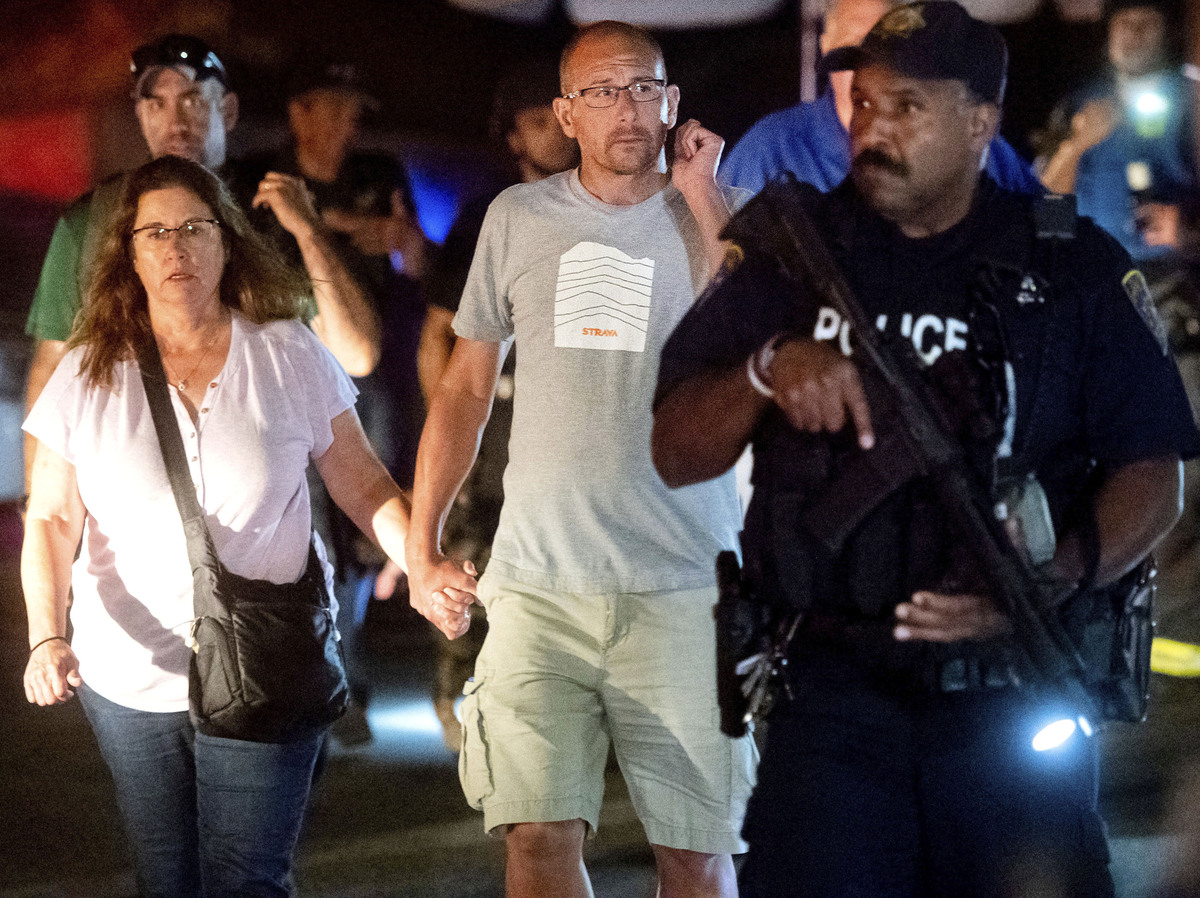 The shooting started while the band Tin Man was onstage, leading to some confusion over the sudden sound of gunfire.

Francisco Cruz was at the festival with about 20 relatives — some of whom were in town to attend a wedding. He told NPR member station KQED that he was near the stage when he heard a gunshot.

"I saw this guy dressed up," Cruz told KQED. "I thought he was a sheriff because he was wearing a brown vest with the green pants and the hat."

At first, Cruz said, he thought the "sheriff" might have fired his weapon accidentally.

"But then when I saw him picking up the gun and reloading the gun that's when I knew what it was," he said. "We were all in danger."

Cruz raced to get his kids to safety. When the scary situation was finally resolved, he realized his cousin had been shot. She was taken to the Santa Clara Valley Medical Center.

Some of Cruz's relatives had been visiting from Mexico when they encountered what he called "a nightmare" on Sunday. As Cruz tells KQED, "You know, I just wanted to show them the beautiful side of California."

Chief Smithee: Gun shots were heard around 5:41pm and officers engaged #GilroyActiveShooter in less than a minute. Witnesses stated there may be a 2nd shooter, investigation continues.

Police officers who were nearby rushed to engage the gunman in less than a minute. Smithee said Sunday night that the gunfire seemed to be "somewhat random, as he moved out into the festival area."

When the shooter saw the officers, he fired at them, Smithee said. And despite being armed only with handguns, the three officers were quickly able to take him down, the chief added.

Police do not currently have a motive for the deadly attack.

Among the questions the FBI is working to answer, Fair said, is whether Legan was affiliated with any criminals or groups that embrace violence.

Fair also said the crime scene is larger than investigators first believed, saying it is "many, many many acres." He added that the FBI currently has a team of 30 combing that area for evidence.

The mayor commended police officers, who acted quickly and professionally "to engage the shooter and to end the threat before more people could be injured or killed." Their actions saved many lives, he said.

"It takes remarkable bravery to run to a shooting" rather than away from it, Velasco added.

On Monday morning, Christmas Hill Park remained an active crime scene, with dozens of law enforcement officials from two counties working on the case. During the night, police posted information for people who were at the festival — helping people reunite with loved ones while also seeking witnesses to the crime.

Gilroy bills itself as the "Garlic Capital of the World." The annual three-day celebration featuring food and music normally attracts between 80,000 and 100,000 people, city officials said.

"Pocketknives and weapons of any kind" are prohibited at the park, according to the festival's website.

"We are family. We have had the wonderful opportunity in this community to celebrate our family through our Garlic Festival, and for over four decades that festival has been our annual family reunion," Bowe said. He called the shooting "such a sad, just horribly upsetting circumstance."

"This is nothing short of horrific," California Gov. Gavin Newsom tweeted Sunday. "Tonight, CA stands with the Gilroy community. My office is monitoring the situation closely. Grateful for the law enforcement's efforts and their continued work as this situation develops."

President Trump also responded to reports of the shooting on Sunday. "Law Enforcement is at the scene of shootings in Gilroy, California. Reports are that shooter has not yet been apprehended. Be careful and safe!" he tweeted.