Accessibility links
India's Wild Tiger Population Up Some 30% Since 2014, According To Census The country counted a total of 2,967 wild tigers, an increase of more than 30% in four years. 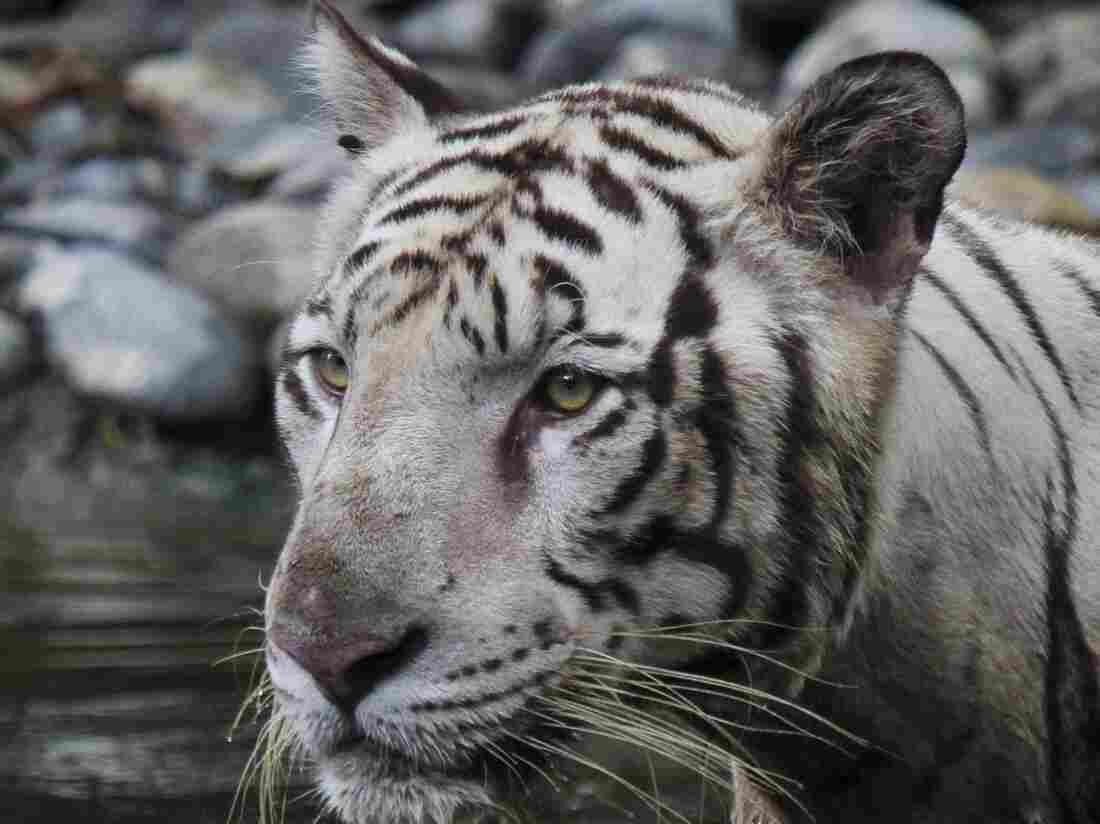 A white tiger at the Alipore zoo in Kolkata, India. India's tiger population has grown to nearly 3,000, making the country one of the safest habitats for the endangered animals. Bikas Das/AP hide caption 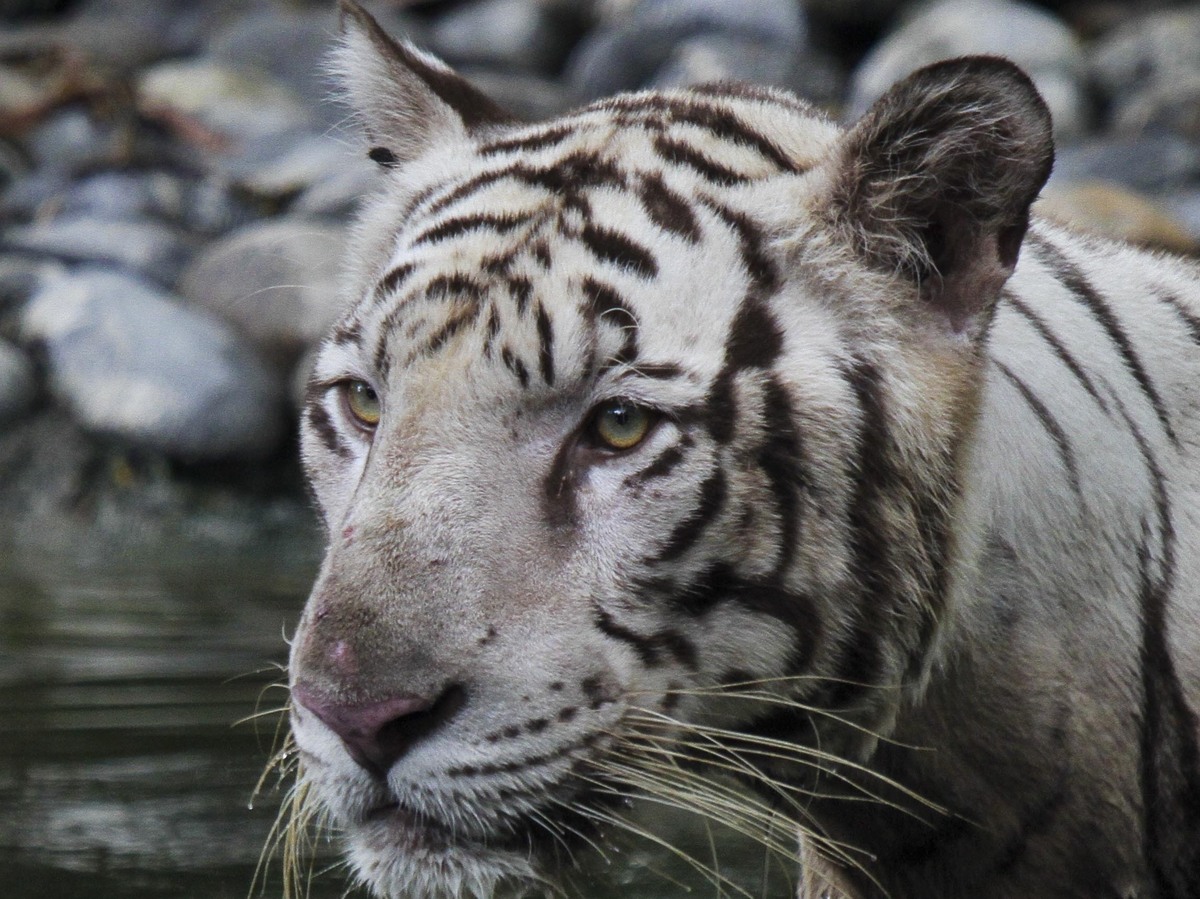 A white tiger at the Alipore zoo in Kolkata, India. India's tiger population has grown to nearly 3,000, making the country one of the safest habitats for the endangered animals.

In 2010, India sought to double its tiger population by 2022. But on International Tiger Day, the country announced it met its goal four years earlier than expected.

"Once the people of India decide to do something, there is no force that can prevent them from getting the desired results," Modi announced at a news conference. "Today we reaffirm our commitment towards protecting tigers."

A commitment fulfilled, that too well in advance!

It was decided to work towards doubling the tiger population by 2022 but India achieved this 4 years in advance!

India is proud to be home to almost 75% of the global tiger population. #InternationalTigerDay pic.twitter.com/t98f2RICE5

He added that India now takes the lead in being the biggest and safest habitat in the world for tigers. The population, now at 2,967, is up from 2,226 since 2014.

"There are several plants and animals out there that need our help," Modi said. "What is it that we can do? Either through technology or human action to give them ... a life so that they can add beauty and diversity to our planet."

After learning that there were a limited amount of tigers left in the world, India decided to strengthen the conservation of tigers in its country. In an effort to protect the endangered species, the National Tiger Conservation Authority was created to count the population.

The recent survey, believed to be the world's largest effort invested in any wildlife, has been conducted every four years since 2006 when the tiger count was at an all-time low of 1,411. Taking into account "carnivore signs" and prey estimation, the 2018 census was carried out using more than 26,000 camera traps across known tiger habitats. Thousands of wildlife foresters and scientists also set out on foot to cover half a million square kilometers to collect physical signs of tiger markings.

According to the report, the state of Madhya Pradesh had the highest number with 526 tigers, closely followed by Karnataka with 524 and Uttarakhand with 442 tigers.

Calvin Klein's Obsession Could Be The Trick To Catching A Tiger

"This news brings us another step closer to securing a future for one of the world's most iconic species and is further proof that tiger recovery is possible when political will and the right conditions exist," the World Wide Fund said in a statement.

"They also focus a lot on the issues around the interface of communities that live in the buffer zones around these tiger reserves to ensure that people and tigers are able to live compatibly together as best as they can."

Since 2006, tigers sightings increased at a rate of 6% per year in India, which Hemley says may signal that the tiger population is headed in the right direction.

On the other hand, this past week a female tiger was beaten to death by a mob of villagers in India who claimed the animal attacked local people. As a result, the police have filed a First Information Report against more than 40 people, according to the Times of India.

Last year, a man-eating tigress in India was hunted and shot dead after a huge hunt. The female tiger, which evaded capture for 2 years, was said to have been responsible for killing 13 people.

Hemley estimates that the world has lost around 95% of tigers that once lived on the planet. Tigers are found in about a dozen countries across Asia yet there are currently fewer than 4,000 tigers left in the wild, she says.

Remaining tigers face constant threats from retaliatory killings, habitat loss and poaching — body parts such as whiskers, teeth and skin are sold on the black market and used in traditional Chinese medicine. The tigers are forced to compete with growing human populations for space.

Hemley said she is hopeful that countries can turn the situation around and prevent the endangered species from becoming extinct. She adds that a tiger plays an important role in regulating the ecology of a given area which is a "big deal to the health of our planet."

"When the tiger recovers, you're not only seeing the recovery of that species but you're also protecting large areas ... and so we're able to help conserve literally hundreds if not thousands of other species," she said.

During his speech, the prime minister expressed confidence that India would prosper both economically and environmentally without harming wildlife.