Accessibility links
U.S.-China Trade Talks Resume In Shanghai, But A Deal Remains Uncertain U.S. trade negotiators are in Shanghai for talks with their Chinese counterparts this week, but there appears to be little pressure for a settlement in the year-old conflict. 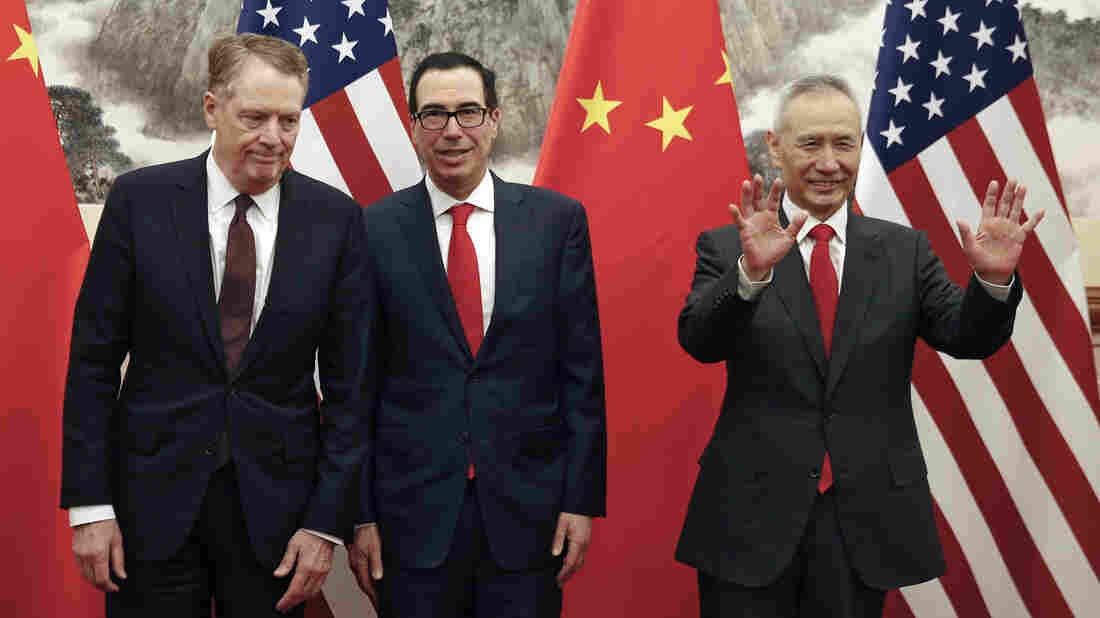 U.S. Trade Representative Robert Lighthizer (from left), U.S. Treasury Secretary Steven Mnuchin and Chinese Vice Premier Liu He gather for a meeting in Beijing on May 1. They are meeting again in Shanghai this week. Andy Wong/AFP/Getty Images hide caption 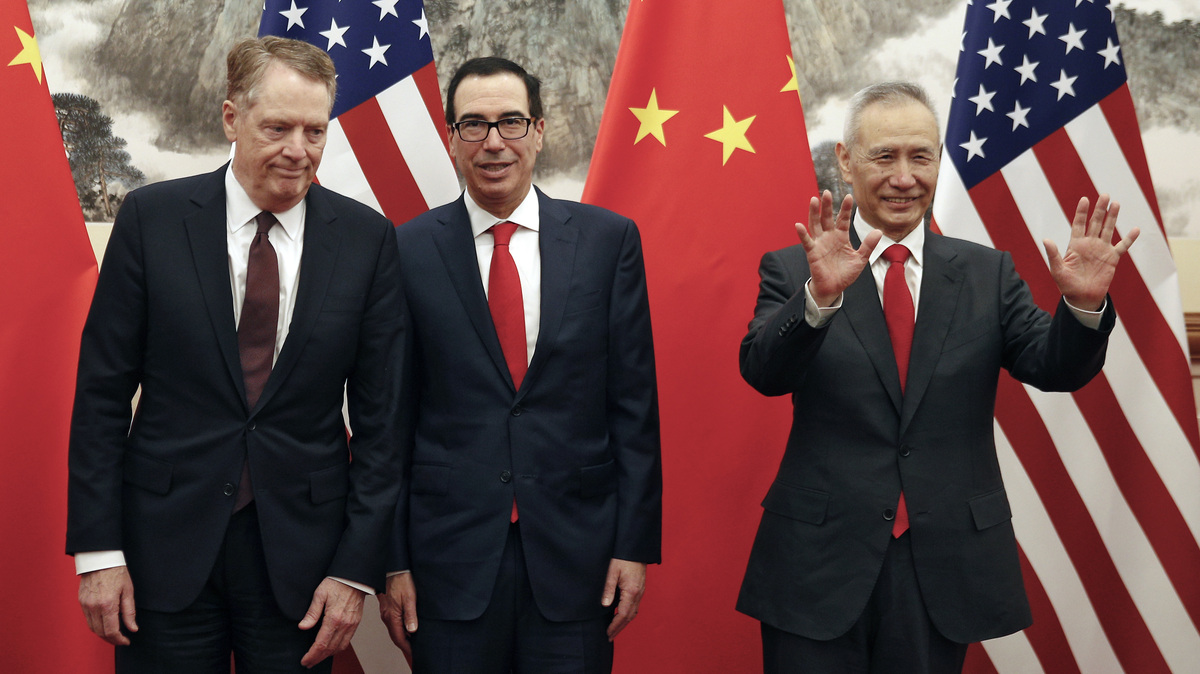 U.S. Trade Representative Robert Lighthizer (from left), U.S. Treasury Secretary Steven Mnuchin and Chinese Vice Premier Liu He gather for a meeting in Beijing on May 1. They are meeting again in Shanghai this week.

U.S. trade negotiators opened a new round of talks in China on Tuesday. But there appears to be little pressure for a settlement, even as the year-old conflict begins to weigh on the global economy.

The trade war began last summer when the Trump administration slapped tariffs on $50 billion worth of Chinese imports. Since then, it has escalated in fits and starts. The U.S. now adds a 25% tax to some $250 billion in Chinese imports. Although Trump paints his tariffs as a windfall for the U.S. Treasury, economists say the bulk of the cost is paid by American businesses and consumers buying Chinese goods.

The battle has depressed trade between the countries. U.S. exports to China fell more than 30% in June compared to a year ago, while imports from China shrank by nearly 8%.

China has largely curtailed its purchases of U.S. farm products such as soybeans. Last week, the Agriculture Department announced details of a $16 billion aid package for farmers to help offset the lost sales to China.

"We're giving some money to our farmers who have been really targeted by China," Trump said. "The farmers like me, and I love the farmers."

Trump has repeatedly accused China of taking advantage of the United States.

"For China, until now, the U.S. has been 'easy pickens,' " he tweeted Monday.

The administration wants to see significant structural reforms in China, including stronger protections for intellectual property and reduced government subsidies. But it's not clear what, if any, concessions the U.S. team might wring out of the talks. The delegation is led by Treasury Secretary Steven Mnuchin and U.S. Trade Representative Robert Lighthizer.

China wants the U.S. to lift tariffs on its exports and stop restricting technology sales to the Chinese telecom giant Huawei. Trump has shown a willingness to let U.S. tech firms keep supplying hardware to Huawei, even though security officials warn the company could become a conduit for Chinese espionage.

Last week, the president complained that China is abusing its status as a self-proclaimed "developing country" in order to avoid opening its markets.

"After years of explosive growth, China has the second largest Gross Domestic Product in the world, behind only the United States," Trump wrote in a White House memo. He threatened to unilaterally stop treating China as a developing country if the World Trade Organization fails to reform its rules.

Leaders of the Federal Reserve have pointed to growing trade tensions as one factor behind a slowdown in worldwide economic growth.

The Fed is widely expected to cut interest rates this week in an effort to prop up sagging growth in the U.S. Growth slowed from an annual rate of 3.1% in the first three months of the year to just 2.1% between April and June.