Accessibility links
'Archaeology From Space': Sarah Parcak Says Human History Gives Her Hope Sarah Parcak has found that studying the rise and fall of civilizations has given her hope, or at least some hope. Her new book is called Archaeology from Space: How The Future Shapes Our Past. 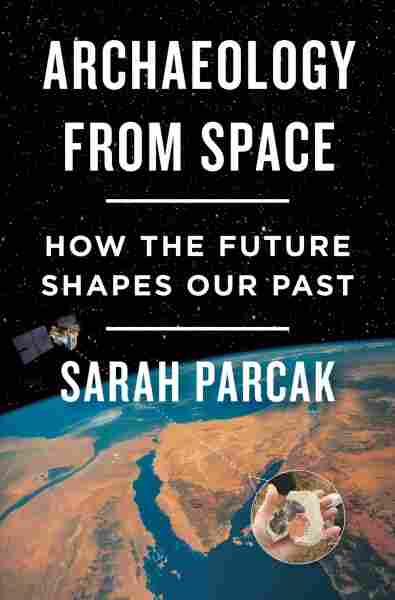 How the Future Shapes Our Past

"My entire life is in ruins."

The first line in Sarah Parcak's new book might come off a bit bleak, but the archaeologist means this literally, not figuratively. In fact, she's found studying thousands of years of human history has actually given her hope, or at least some hope. "Humans are very resilient," she says. "And in spite of all the terrible things that we have done to each other, I think we're 51% good. So I try to hold onto that, especially being the parent of a young child."

Parcak uses satellite imagery to spot ancient settlements, tombs and temples buried under the ground. Her new book is called Archaeology from Space: How The Future Shapes Our Past.

"I think I have the same perspective of Earth that astronauts have," Parcak says. "I don't see borders. I see how connected we are."

Parcak has used satellite imagery to spot more than a dozen potential pyramids and thousands of ancient tombs in Egypt.

"The things on top of the buried sites are affected by what's beneath," she explains. "So by looking at different parts of the light spectrum — especially the near, middle and far infrared — we can see these shapes and outlines in ways that we absolutely cannot see with our naked eyes alone. It's almost like a space-based X-ray system to help us view, in some cases, entire maps of ancient archaeological sites."

In some ways, this work is in Parcak's blood. Her grandfather was a paratrooper in World War II and the aerial mapping techniques that he used back then — which he would later use to develop cutting edge forestry technology — helped pave the way for her work.

Sarah Parcak: How Can Crowdsourcing Be A Tool For Modern Archaeological Discovery?

"He's the reason I took my first remote sensing class," Parcak says. And she's found some uncanny similarities between his career and hers. Take the time she came across an article he wrote in 1953 about the way infrared technology could help map different trees: "I realized line-for-line it was almost identical to what I had written about the way infrared satellite imagery could be used to map archaeological sites," she says.

Parcak's grandfather died more than two decades ago, "but I feel like he's with me all the time," she says.

As an archaeologist, Parcak feels deeply connected to the past. She still remembers working in Egypt more than 20 years ago, and unearthing a 4,200-year-old pot with a big thumbprint on the handle. Parcak could envision a large man, working at his potter's wheel, pressing his finger into the soft clay.

"We're not actually digging for things, we're actually digging for people — the people who made these things," she says. "That's what I try to remember no matter what I take out of the ground. I try to imagine the humans that made it that were so much like us, in spite of being separated by thousands of years."

Parcak loves being out in the field, but says her sitting-at-her-computer-screen to digging-and-getting-dirt-under-her-fingernails ratio is probably about 12 to 1. Still, she says she never loses sight of her "greatest privilege" — getting to lay eyes on an object that hasn't been seen in thousands of years.

"I feel like I'm adding little footnotes to the history of humanity, one at a time, with every little thing that I excavate," she says. "I try to never take it for granted for a moment."

Parcak says she thinks of the ancient world as a great big jigsaw puzzle. With each discovery, with each dig, with each piece of pottery, she has found another piece of the puzzle — and those pieces gradually help her see the larger picture.

So she looks up to space to help answer the "bigger questions" about life on Earth.

Sam Gringlas, Gustavo Contreras and Jolie Myers produced and edited this interview for broadcast. Beth Novey adapted it for the Web.