Boeing 737 Max airplanes are stored in an area adjacent to Boeing Field last month in Seattle. Airlines around the world are cutting flights because of the grounding of the plane. Stephen Brashear/Getty Images hide caption 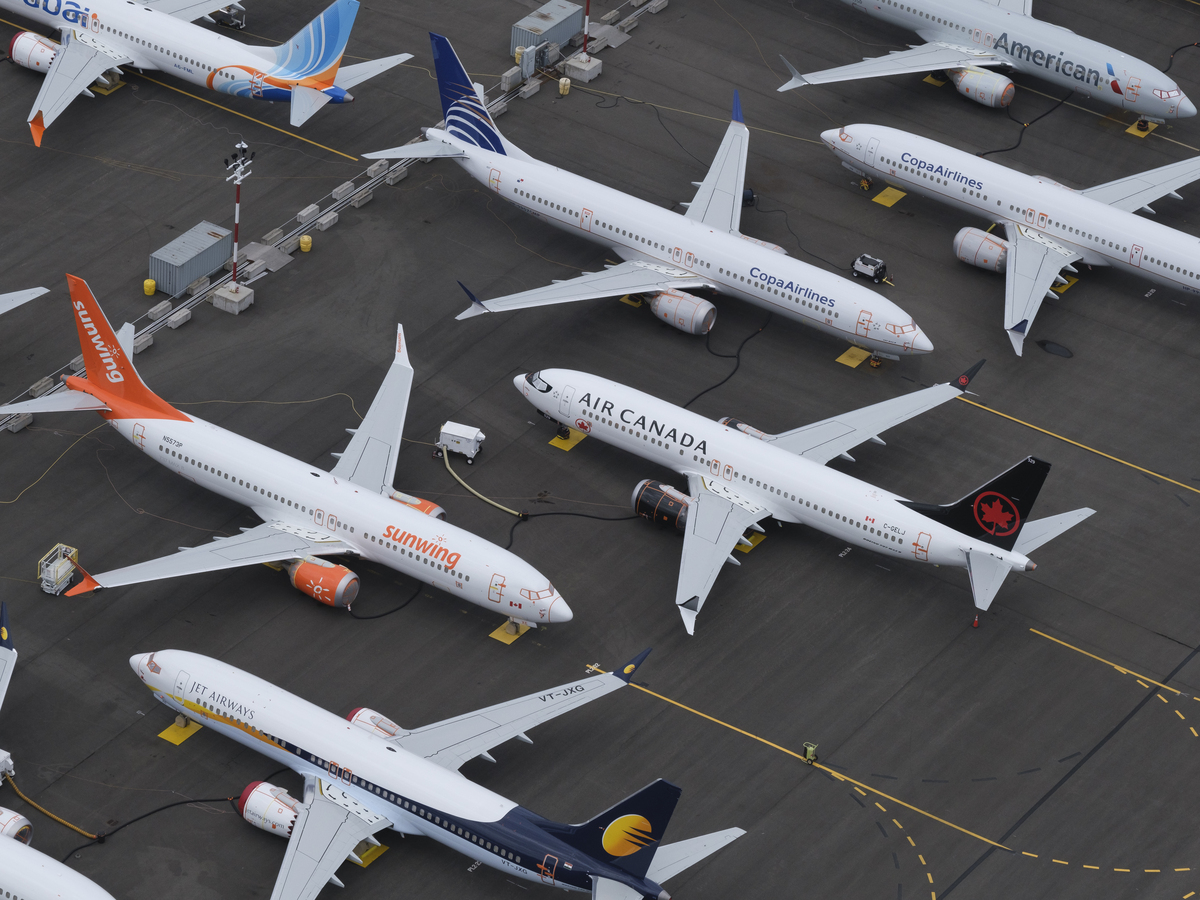 Boeing 737 Max airplanes are stored in an area adjacent to Boeing Field last month in Seattle. Airlines around the world are cutting flights because of the grounding of the plane.

When Nancy Dunne goes to see her family outside Chicago, she likes to fly Southwest Airlines from Newark Liberty International Airport near her home in Maplewood, N.J.

Last week, Southwest announced it would no longer fly to Newark. The grounding of the Boeing 737 Max after two deadly crashes in Ethiopia and Indonesia has caused the airline to cancel flights and consolidate routes into places such as Newark, which are less profitable.

"For me this is really a big thing. I'll figure something out. Maybe it's time for me to move back to Chicago," Dunne says with a laugh, as she stands near the airport's Southwest counter.

When the 737 Max was grounded last March, carriers around the world were forced to adjust suddenly, canceling thousands of flights and delaying the retirement of some older planes.

Now, the impact of the 737 Max grounding on airlines and their passengers is becoming more clear: smaller profits and more crowded planes. Many U.S. and international airlines that relied on Boeing's bestselling plane have had to cancel thousands of flights.

"Obviously it was a shock to everybody in the industry," says airline analyst Richard Aboulafia. "But of course this has grown significantly as a problem over the past few months."

In recent days, airlines have begun releasing their earnings reports for the second quarter, and some major carriers have taken a big hit.

No longer able to use their 737 Maxes, airlines have reduced the number of routes they serve. American Airlines has canceled 115 flights per day, potentially affecting about 23,000 passengers daily.

Foreign carriers have been hit as well. Flydubai, a low-cost Middle East airline serving 95 destinations, has canceled 17% of its flying schedule. European budget airline Ryanair warned Monday that it may have to lay off employees because of the grounding.

With so many cancellations, flights are naturally becoming more crowded. Southwest, which flies more 737 Maxes than any other U.S. carrier, said last week that the number of passengers per jet had risen during April, May and June.

"For customers, what people will notice compared with the same season of last year is the airplanes have become fuller," says Yi Gao, associate professor in the School of Aviation and Transportation Technology at Purdue University.

The cancellations are also having an impact on the airlines' bottom lines. Southwest said the grounding had reduced its second-quarter profit by $175 million.

Boeing has set aside nearly $5 billion for losses tied to the grounding, and some part of that will go toward compensating the airlines for their losses. But how much it will pay is to be negotiated individually.

Fortunately, these are good times for the airline industry, with heavy demand for seats, and airlines such as Southwest are still making money.

"At the moment the U.S. economy is strong, so people are traveling. No matter [if it's] business persons or leisure travelers, they're all traveling," Gao says.

But the longer the grounding goes on, the more precarious each airline's positions will be.

Aboulafia notes that the 737 Max is part of a new generation of planes that were supposed to be much more fuel efficient than their predecessors. Being forced to use older planes will make operations more costly, he says.

"Increasingly, there are other airlines that have new-generation Airbus jets, and they're at a competitive advantage" in terms of efficiency, he says.

That's bad news for carriers like American, United and Southwest that rely on the 737 Max, and good news for those — such as Delta Air Lines — that don't.

And right now, no one can say for sure when the 737 Maxes will be back in the air. While Boeing hopes to get them flying by October, the 737 Max's fate remains in the hands of regulators.