Accessibility links
'It Came From Something Awful' Links 4Chan And Today's Political Discourse If author Dale Beran is to be believed, all the world's an Internet forum. His new book offers an overview of Internet culture and explores the mindset and techniques of early Internet trolls.

'It Came From Something Awful' Links 4Chan And Today's Political Discourse

'It Came From Something Awful' Links 4Chan And Today's Political Discourse 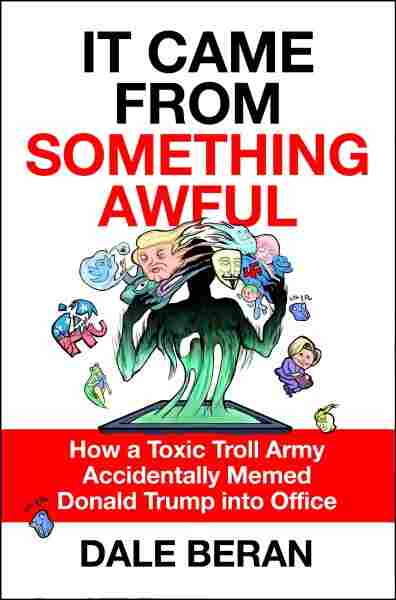 It Came from Something Awful

A few things happened this July.

Two hundred or so folks decked out in MAGA hats and black Fred Perry polos gathered in Washington, D.C., shortly after the Fourth. It was nominally a rally about free speech on social media platforms, but in practice a whimpering PR stunt from various fading, far-right figures. Two weeks later a memelord was invited to the White House for a "social media summit" — again, nominally about free speech but, in practice, a PR flex from some lesser known right-wing figures. And then at the end of the month, Avengers: Endgame became the highest grossing movie of all time, beating out Avatar.

If you buy the argument proposed in Dale Beran's new book, It Came from Something Awful, all three events are related.

Beran's a writer and cartoonist who got a lot of attention for a 2017 piece he published on Medium titled "4chan: The Skeleton Key to the Rise of Trump." In it, he breaks down the link between the now infamous imageboard 4chan to the state of online political discourse today. The majority of his new book is an expansion of that. If you're a normie who can't quite wrap your head around exactly why so many Internet goons have anime girl avatars, or how popular online political action shifted from occupying Zuccotti Park to mass trolling actress Leslie Jones and the female reboot of Ghostbusters, or yes, if you still don't know what the deal is with that frog, then Beran's book provides a good overview of Internet culture.

But he also gets at the undergirding feeling behind all these actions. In a chapter about the mindset and techniques of early Internet trolls, Beran writes:

"By the mid-2000s, the internet was transitioning from a society of professional adults to idle teens congregating in places like [pop culture internet forum Something Awful]. These kids were less interested in defending discourse than in the situationist approach to trolling — playing the whole thing like a game. 90s nihilism endured well into the 2000s, longer than most youth cultures. Like wine turned into vinegar, it could decay no further. Both culture and counter-culture taught new generations to be so wary of being deceived and manipulated, it was best to hold nothing in your heart at all. Lacking convictions, the logic went, your desires could not be snagged or stolen. And no better example for this state of affairs than the unreal worlds of screens. The art of cruelty, of tearing apart delicately wrought fantasy reals, thrived."

In his original Medium essay, Beran wrote about how he was an inch away from ending up like the trolls he writes about, of what this nihilistic mindset offered him as he was broke, underemployed and aimless. There's less of a focus on himself in the book. Instead he opts for an empathetic distance, like a guy explaining how his crew from high school lost touch over the years — oh, I moved away for school, and then Jerry got really into basketball, and Ryan just kept getting angry for no reason. Except replace "basketball" with "hating Black people and women" and "angry" with "really angry." It's a disappointing omission. It might've helped illuminate his underlying point: Economic inequality has made us all feel impotent and searching for an identity, so we glom onto a reality imposed on us via screens. For some that means you're emotionally invested in how well a movie from the Disney corporation is doing at the box office. For others that means pretending to be mad about gender representation in video games for the lulz until you start being actually mad.

But avoiding that personal touch helps him avoid the trap of making false equivalences between chosen identities. Nobody gets murdered at ComiCon, whereas they do at rallies set up and attended by Internet trolls. The political actions of online goons have a much more powerful impact on the actual lives of brown people in the United States than people who happen to really like My Little Pony. The sections on Tumblr and teens searching for their sexual identity coinciding with the wider campus culture wars that get a lot of disproportionate attention comes off as less blamey and directly causal than other 4chan explainers like Andrea Nagle's Kill All Normies.

And yet, Beran makes a convincing argument that we're all caught up in simulations of political change rather than actually affecting it. Ironically, the idea is best explained in the book through a retelling of an episode of Star Trek: The Next Generation where the gang is stuck in a holodeck simulation of Sherlock Holmes and "Dr. Moriarty" tricks them by "simulating an exit back into reality on the holodeck." Inception. The Matrix. Flight Club. All Internet beloved dorm-room poster movies that get at the similar idea: What if we're not actually doing anything, and the few in power are reaping rewards? In a passage describing how the trolls on 4chan's "politically incorrect" /pol/ board seemed to accidentally create the Frankenstein monster known as the QAnon conspiracy, Beran writes:

"Soon, even /pol/ users believed the fiction, even though they were the ones making it up! Except 'belief' wasn't really the correct term anymore. There was no word for this new sort of naivete, in which the distinction between reality and fiction, trolling and trolled, identity and anon erased itself as people made a sport out of their politics and the discontents it bred."

The title of the book is a bit of a misnomer — more time is spent on 4chan and its even more terrible offspring 8chan than the original Something Awful forums. But it makes sense if you consider Something Awful a stand-in for pop culture consumption at large. If Beran's to be believed, all the world's an Internet forum. The mods aren't asleep, they're just out at the movies, leaving the goons free to do their work.