Accessibility links
See-Saw Diplomacy Lets People Play Together Along U.S. Border Wall A playdate recently broke out at the fence that separates the U.S. and Mexico in an event that was "filled with joy, excitement, and togetherness." 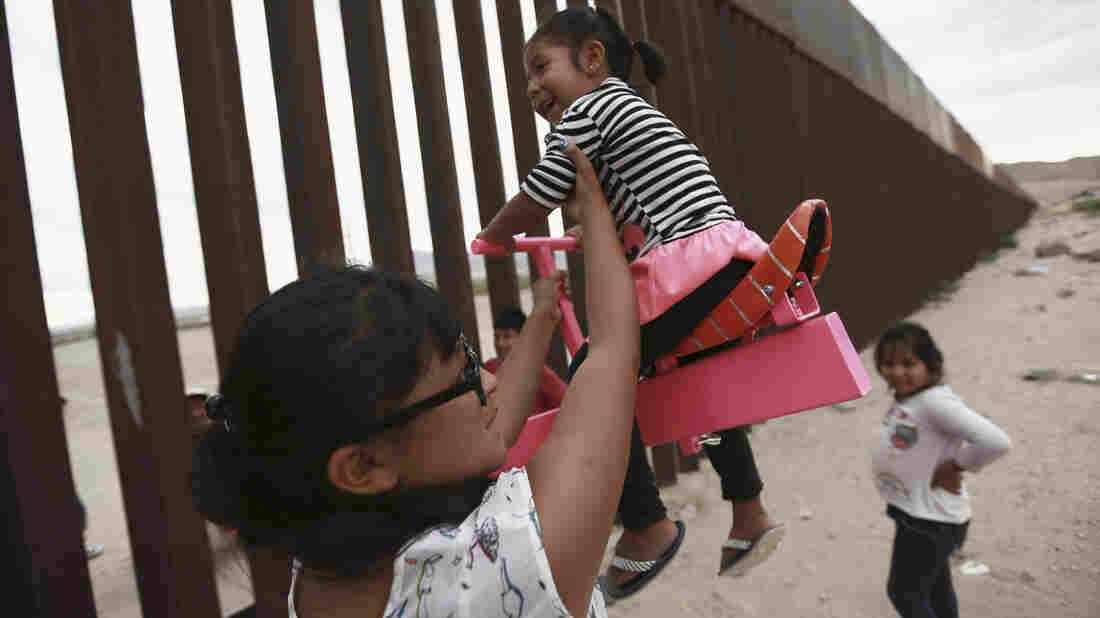 A set of pink seesaws allowed people to share some fun along the U.S.-Mexico border wall this week. Here, a woman helps her little girls ride the seesaw that was installed near Ciudad de Juarez, Mexico. Christian Chavez/AP hide caption 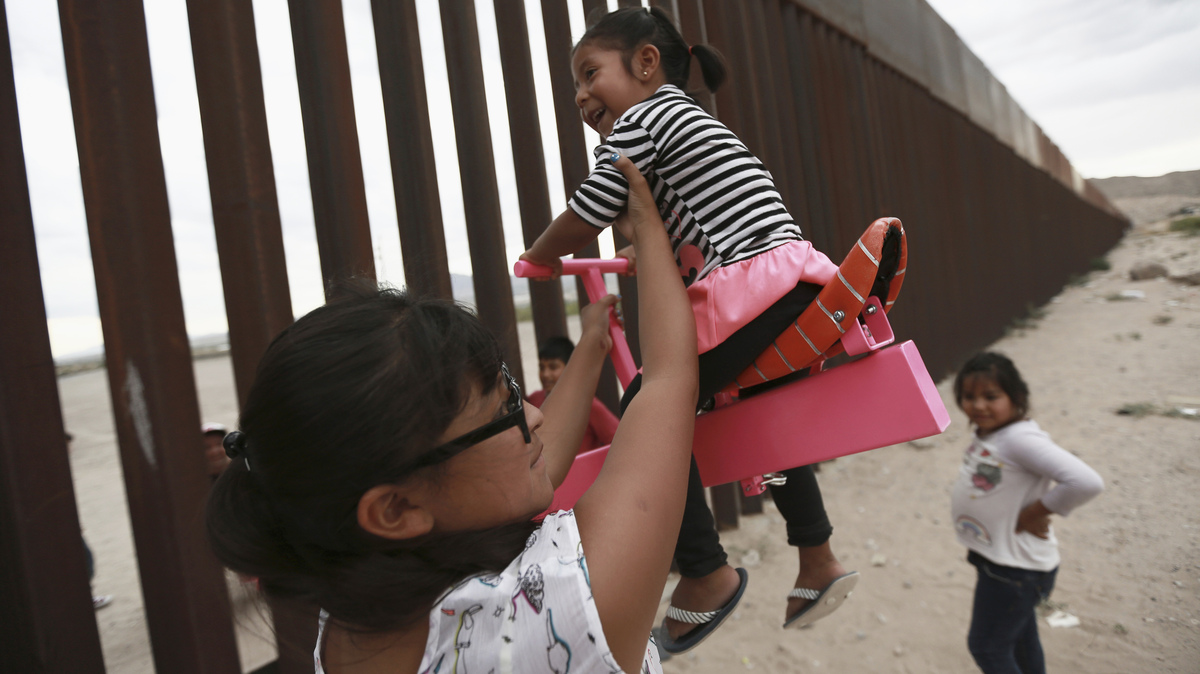 A set of pink seesaws allowed people to share some fun along the U.S.-Mexico border wall this week. Here, a woman helps her little girls ride the seesaw that was installed near Ciudad de Juarez, Mexico.

A stretch of the border wall between the U.S. and Mexico was adorned with a set of pink see-saws this week — allowing children (and grownups) to play together across the barrier. The event was "filled with joy, excitement, and togetherness," says architect Ronald Rael, a leader of the project.

The seesaws were installed on Sunday, when their steel beams were eased through the slats of the tall fence that divides Sunland Park, N.M., from Colonia Anapra — a community on the western side of Ciudad Juárez in Mexico.

"Everyone was very happy and excited to engage the seesaws," Rael says via email, describing the mood at Sunday's event. And while he admits to being a little nervous about the completion of a project that had been brewing for 10 years, he says it went off without a hitch.

"It was peaceful and fun — a day at a park for the children and mothers of Anapra," Rael says.

The seesaws were created by Rael and fellow architect Virginia San Fratello; the two are partners in a design firm. By installing playground toys, they sought to tweak the meaning of a border fence.

"The wall became a literal fulcrum for U.S. - Mexico relations" once the seesaws were added, Rael said in an Instagram post about the project.

Rael, who teaches at the University of California, Berkeley, added, "children and adults were connected in meaningful ways on both sides with the recognition that the actions that take place on one side have a direct consequence on the other side."

In a statement to NPR, Rael and San Fratello say the installation was made to be temporary, adding that the seesaws — fabricated in Juarez — could be installed quickly.

As for why they turned an idea from 2009 into a reality in 2019, they say the project "is incredibly important at a time when relationships between people on both sides are being severed by the wall and the politics of the wall."

To help install the seesaws, Rael and San Fratello collaborated with Colectivo Chopeke, a Juarez-based artist collective. And when everything was finally in place, children from Anapra joined Rael in riding on the seats, bouncing up and down with their fellow riders on the U.S. side.

Of course, it's unlikely that three seesaws could recast the tense and difficult discussions around U.S. immigration policies that have divided families from loved ones. Reflecting the high-profile attention the border has gotten, both Mexican soldiers and U.S. Border Patrol agents were present during Sunday's event.

"U.S. Border Patrol did not have a problem with it, nor did soldiers from Mexico," Rael says.

The bright pink teetertotters brought a new chance to see the border through the eyes of people who live along the divide — and for those people to see each other in a new light, even if their view was confined by tall steel slats.

"The joy that was shared this day on both sides is something that will stay with me forever," Rael said on Instagram Tuesday, in an update about the project. With that message, he posted a video of people playing on the pink seesaws, smiling at each other through the fence.

Even before Sunday, the concept of putting seesaws on a border fence had already drawn acclaim for Rael and San Fratello. They note that their original drawings and models for a "Teeter-Totter Wall" are held by the Museum of Modern Art in New York and the San Francisco Museum of Modern Art.

While the original idea sprang forth as a way to contemplate trade and labor imbalances, the seesaws have taken on added meaning as President Trump has imposed strict policies along the border and vehemently spoken out against illegal immigration.

As Rael and San Fratello said via email, the seesaws are meant to tell the story of "how the actions on one side of the border have direct consequences on the other."