Accessibility links
Fed Cuts Interest Rates For First Time Since The Recession The quarter-point cut signals growing concern at the Federal Reserve about a slowdown in the economy amid the trade war with China. The Fed last cut rates in 2008 and raised them as late as December. 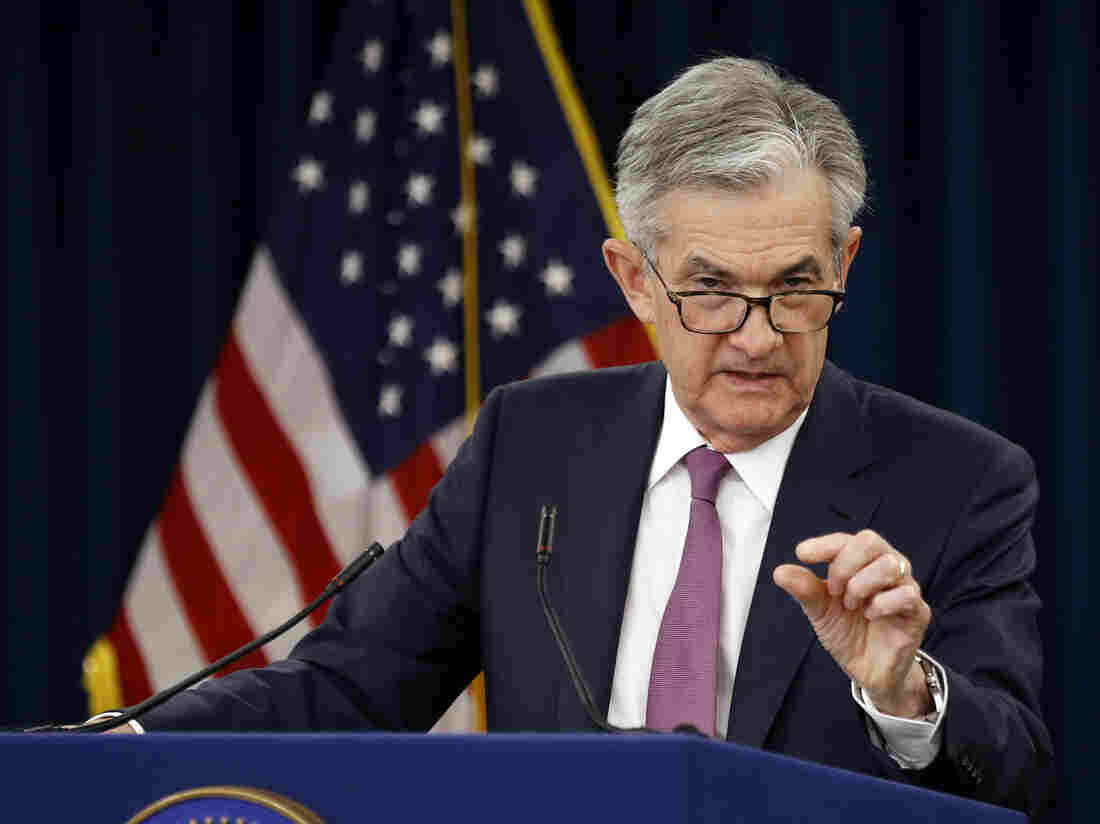 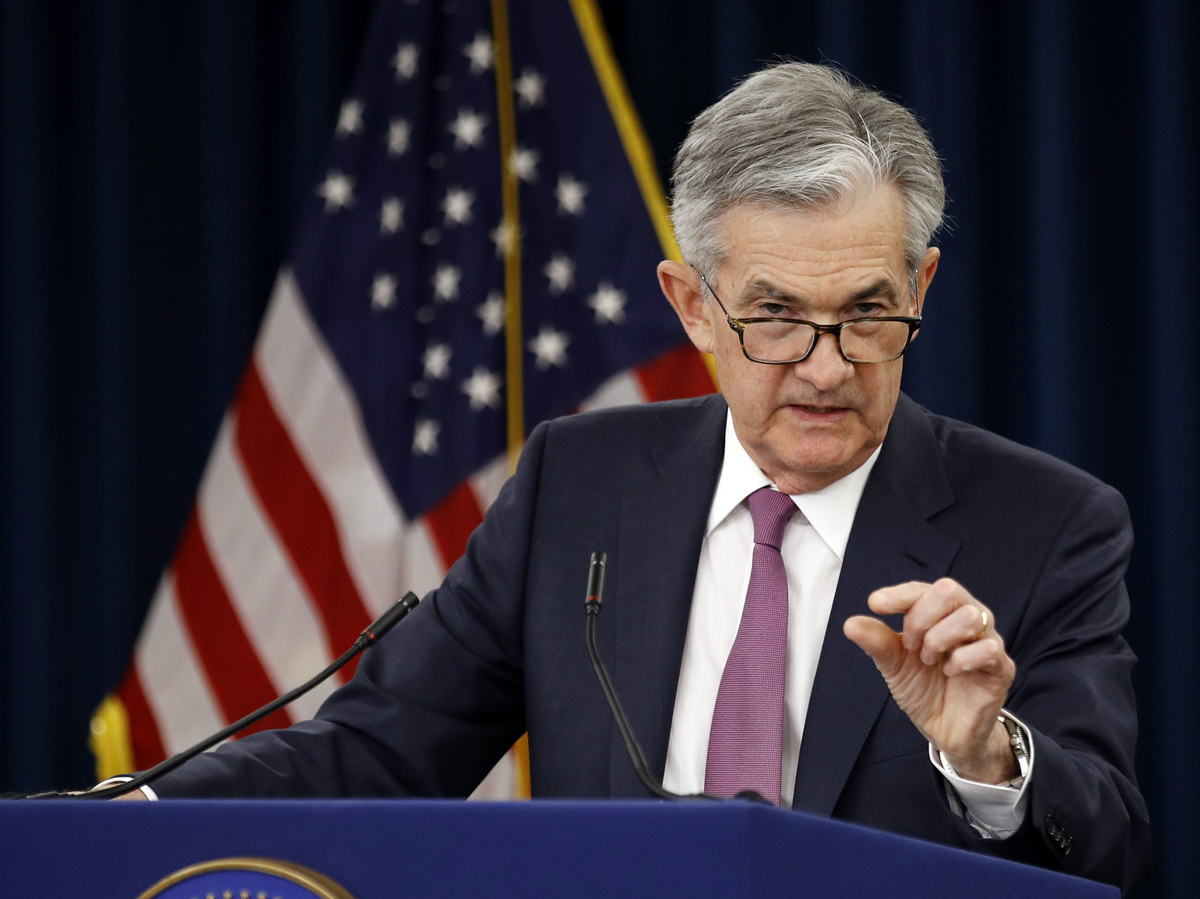 Federal Reserve Board Chairman Jerome Powell has been under pressure from President Trump to cut interest rates.

The Federal Reserve is cutting interest rates for the first time in over a decade — a preemptive move aimed at extending the already record-long economic expansion.

The Fed on Wednesday lowered its target for the key federal funds rate by a quarter percentage point. The move should decrease the cost of borrowing, including for credit cards, auto loans and mortgages.

"The outlook for the U.S. economy remains favorable and this action is designed to support that outlook," Fed Chairman Jerome Powell said. He described the rate cut as an insurance policy against potential speed bumps for the economy, including rising trade tensions and a slowdown in global growth.

"There is really no reason why the expansion can't keep going," Powell said. "Inflation is not troublingly high. If you look at the U.S. economy right now, there's no sector that's booming and therefore might bust."

Although the rate cut had been widely telegraphed in advance of Wednesday's announcement, the stock market reacted negatively to Powell's comments. The Dow Jones Industrial Average fell more than 450 points before paring its losses to close down 334 points, or 1.2%. The S&P 500 and the Nasdaq both fell more than 1%.

Investors appeared to be concerned the Fed would pause after this rate cut, although Powell left the door open to additional cuts if economic conditions warrant.

"As usual, Powell let us down," Trump tweeted Wednesday afternoon. "What the Market wanted to hear from Jay Powell and the Federal Reserve was that this was the beginning of a lengthy and aggressive rate-cutting cycle that would keep pace with China, The European Union and other countries around the world."

Powell insists the Fed will be guided by economic signals, not jawboning from the White House.

"We never take into account political considerations," Powell said. "There's no place in our discussions for that. We also don't conduct monetary policy to prove our independence."

The U.S. economy is still growing at a modest pace. And, at 3.7%, unemployment is near a 50-year low. But the central bank is concerned that trade tensions with China and slowing growth in other countries could put the brakes on the economy, just as many Americans are beginning to enjoy the benefits of a slow-moving recovery.

"My view is that the best thing we can do for those people is to sustain the expansion, keep it going," Powell said.

In announcing the rate cut, Fed officials pointed to sluggish business investment and inflation that has been running stubbornly below the central bank's 2% target.

"In light of the implications of global developments for the economic outlook as well as muted inflation pressures," policymakers decided to lower the Fed's key interest rate, the central bank said in a statement. Officials stressed that they would continue to monitor economic conditions and would "act as appropriate to sustain the expansion."

In recent years, the Fed has been focused on raising rates, in an effort to prevent the economy from overheating. Between December 2016 and December 2018, the Fed raised rates eight times.

While interest rates are still low by historical standards, the president frequently complains that the Fed's actions stifled what could have been stronger economic growth.

Trump promised to boost annual GDP growth to 3% or higher by cutting taxes and rolling back regulation. Growth topped 3% in the first three months of 2019, but slowed to an annual rate of just 2.1% in the second quarter. Revised figures from the Commerce Department also show that Trump missed the 3% target in 2018.

Consumer spending — a key driver of the economy — remains strong. But business investment has slowed this year, as the effects of the 2017 tax cut wear off and companies contend with rising uncertainty.

Some Fed officials have acknowledged that they may have acted too quickly in raising interest rates last year. Despite low unemployment, wages have risen only modestly.

"The labor market has improved steadily for 10 years now," Powell told a congressional committee this month. "But just in the last couple of years, it's started to reach communities at the edge of the workforce. And it's just so important for us to continue that process for a couple of years and that's why we're so committed to using our tools to sustain the expansion."

Two members of the Fed's rate-setting committee voted against the rate cut, preferring to leave rates unchanged for now.