Accessibility links
Losing An Old Faith — And Gaining A New One — In 'The Churchgoer' Patrick Coleman's novel follows a former pastor, now working as a security guard, who gets caught up in a noirish adventure after one of his coworkers is murdered, but it's much more than a whodunit. 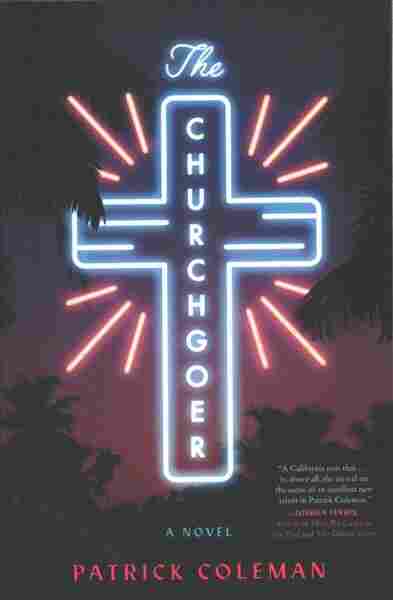 An ex-pastor, an alcoholic, and an atheist walks into a bar ... No, that's not a typo in the verb conjugation; Mark Haines is all three of these things, and rather than turning into a terrible, corny joke, he emerges as an empathetic, deeply complex, and fiercely self-critical protagonist and narrator in Patrick Coleman's debut novel, The Churchgoer.

Written as a modern-day noir, The Churchgoer opens with a chance encounter between Mark and a young woman calling herself Cindy Liu, just before the turn of the millennium. He buys her a burger because she has no money, they sit and eat, and that's it. Innocuous, really, an event that wouldn't have stayed in Mark's memory — except that he sees her again a year later, after the nation "had traded a good old boy for a cowboy in the White House, though that hadn't come to much yet." This time, Mark meets her at the beach where he goes to surf most days, and the woman, whose real name is soon revealed to be Emily, crashes at his place for a couple nights before up and disappearing just when Mark's coworker Mike is murdered and Mark himself is clobbered at their gig as unarmed security guards in a Southern California industrial complex.

The novel's setup and inciting incident suggest it will be a simple whodunit, a novel whose central mystery is discovering the ins and outs of Mike's murder. Instead, it's a story of obsession — with Emily, the woman who disappeared — and faith, which are similar if you look at them from the right angle. Both, at least for Mark, have been selfish preoccupations. When he comes across Sammy, an old friend and one-time congregant who has fallen off the wagon after being counseled into sobriety by Mark years prior, the formerly-saved Sammy doesn't let his ex-pastor off easy: "How long are you going to try to save this one, Haines?" he asks, referring to Emily. "A couple months? A few years? When's the expiration date? Because there is an expiration date. You've got a formula buried in your funky, twisted brain for calculating it, for figuring out when you've gotten enough out of it."

The novel's setup and inciting incident suggest it will be a simple whodunit ... Instead, it's a story of obsession.

While Mark has come to see his pastoral duties as being far more about his own worth to others than about theirs to him or to God, he doesn't fully comprehend how his newfound need to learn what happened to Emily—which he does, chasing clues from a succulent-filled drug den to a megachurch and beyond—grows out of the very self-importance he's sworn off of.

All of this fits into the noir tropes we'd expect: Damsel in distress disappears, haggard older man with sex appeal and edgily tragic life experience attempts to save her, no matter how much trouble he gets into. But the novel never really lets Mark get away with his own arrogance at believing he can or should save this young woman, a virtual stranger. Even his self-loathing is, to some degree, the inverse of his pastoral self-love, both carrying the same dark underbelly of self-righteousness. In other words, The Churchgoer uses all the hallmarks of its genre — from punchy sentences to profound and sometimes overwrought observations about the gloominess of life and the terribleness of people, to the youthful ingénue, to the unfolding of a possible conspiracy — in order to tell a story that criticizes every element of these dynamics.

As a narrator, Mark is fantastic precisely because he's self-aware in a way that noir doesn't tend to showcase, and because his earnest history as a man of faith who's been through years of loss and pain makes his mind a complex place in which to dwell. His hardness leads to moments of strange grace; after he tries to talk to another surfer who ignores him, for instance, Mark has a surge of anger: "There's a kind of clarity to feeling that way. Maybe I wasn't touching some Eternal All anymore, or seeing the world in a grain of sand and a bead of salt water, but ... [I was] rubbing up against humankind's ability to make life an ineluctably large pain in the ass for others."

Though Mark himself can be that pain, he is so human — and unlike his noir counterparts, manages to avoid being a predatory creep around young women — that you find yourself rooting for him. And if Mark's leaving the church was about losing his faith in God, joining the realm of the living as he does here — after coasting emptily through years of a solitary, friendless life — is about gaining another kind of faith, in his fellow human beings.