Accessibility links
'Double Indemnity' Is 75, But Anklets (And Film Noir) Are Forever Double Indemnity is classic film noir: Men in fedoras walk mean streets shrouded in shadow and women are sometimes the sirens to beckon them to their doom. It's a film — and a genre — that endures. 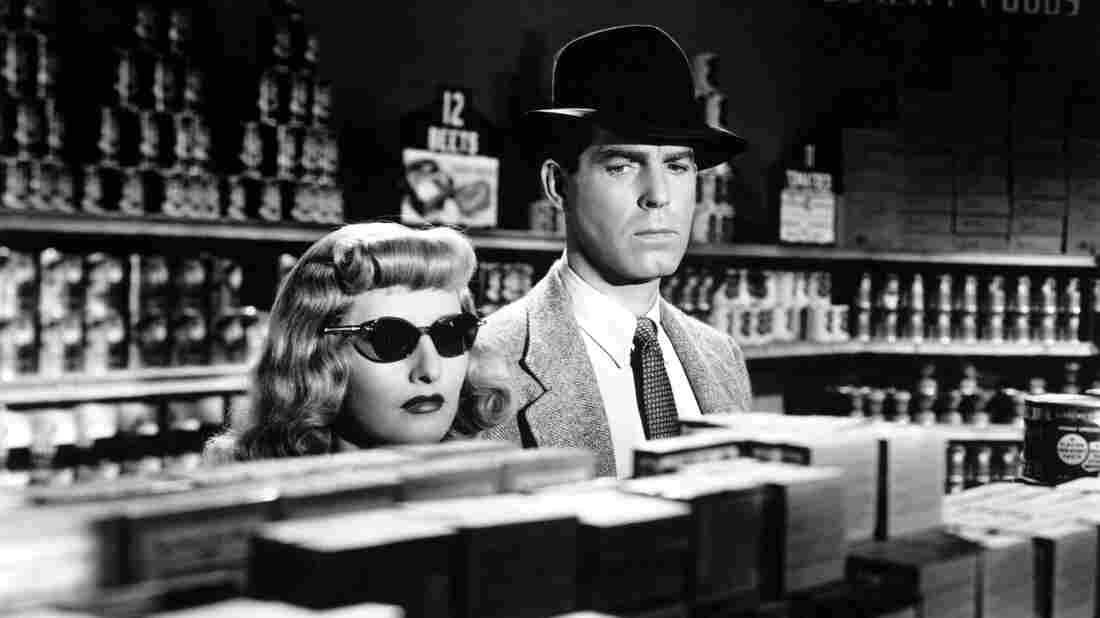 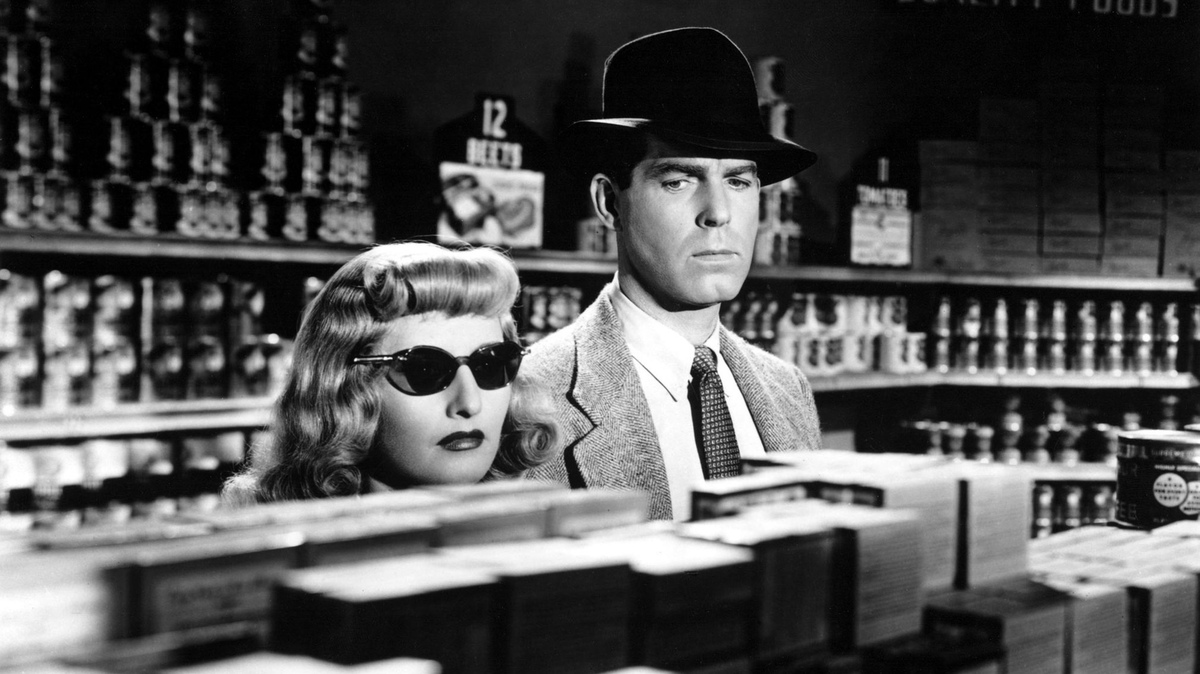 Barbara Stanwyck and Fred MacMurray in a scene from Double Indemnity.

Fred MacMurray plays the hapless insurance salesman in the classic noir Double Indemnity, which turns 75 this month — and helped launch a fraternity of films about wounded men in fedoras falling for sultry femmes fatales.

Walter's confession comes at the start of the film — so I haven't spoiled anything. The woman is Phyllis Dietrichson, played by Barbara Stanwyck. She's a seductive housewife who would be much happier without her husband around. "The other night we drove home from a party, he was drunk again," she says at one point. "When we drove into the garage, he just sat there with his head on the steering wheel with the motor still running. And I thought what it would be like if I didn't switch it off. Just close the garage doors and left him there."

Mystery Loves Company, And TCM's Noir Movie Marathon Has Plenty Of Both

There's no doubt in my mind that it was not only the commercial, but the artistic success of this film is what triggered the film noir movement in Hollywood.

Together, Phyllis and Walter hatch a scheme to kill her husband and make it look like an accident. But in Double Indemnity, it's also a given that the protagonists are doomed. "Suddenly it came over me that everything would go wrong. I couldn't hear my own footsteps. It was the walk of a dead man," Walter agonizes.

"There's no doubt in my mind that it was not only the commercial, but the artistic success of this film is what triggered the film noir movement in Hollywood," says Eddie Muller — the Czar of the Noir, as he likes to call himself. He's the host of Turner Classic Movies' Noir Alley. "And I think that what makes it so special is that the protagonists are the villains," he adds.

75 years ago, that was a big deal. Hollywood was heavily policed by production codes, and it was bold for director Billy Wilder to take his popular stars and turn them into killers. "We're both rotten," Phyllis says at one point. "Only you're a little more rotten," Walter shoots back. "You got me to take care of your husband for you."

Film noir: Stories that exposed the dark underbelly of the American dream. Rich black and white with heavy shadows, and witty double entendres that skirted the censors. And the smoking. SO much smoking. After all, they were as good as dead anyway.

Film noir came from the hard-boiled fiction of writers like Dashiell Hammett, James M. Cain and Raymond Chandler. It took off in Hollywood during and after World War II, when Eddie Muller says you couldn't sell people just on happy-ever-after anymore, "and so finally, here were stories on the big screen at the movie house that reflected that pessimism."

That strain of pessimism and the visual style have never gone away, though it's mostly on TV now, from The Sopranos to Walter White in Breaking Bad, or Jessica Jones, with its tortured female protagonist. "Jessica Jones is sort of in the role of the, what would typically be the male hero, you know, the Humphrey Bogart, Fred MacMurray, where she's the anti-hero," says Jessica Jones creator and showrunner Melissa Rosenberg, who adds that she could draw a line between Jessica Jones and Double Indemnity's femme fatale. "She's driving the story, she's the smart, ambitious one who does what she has to to get what she wants."

Today's audiences are no longer shocked by this kind of story. In fact, says Eddie Muller, people now watch old movies like Double Indemnity because they're a little like comfort food, "like wow, that's great — look, here's a murder story from a more innocent time."

Just don't go looking for innocence down the mean streets of Double Indemnity. You won't find any.

This story was edited for radio by Ted Robbins, and adapted for the Web by Petra Mayer.