Accessibility links
Democratic Debate Takeaways: Sanders, Warren Stand Together In Detroit The candidates' preparation level was high for this event in part because the stakes have risen so far, so fast. 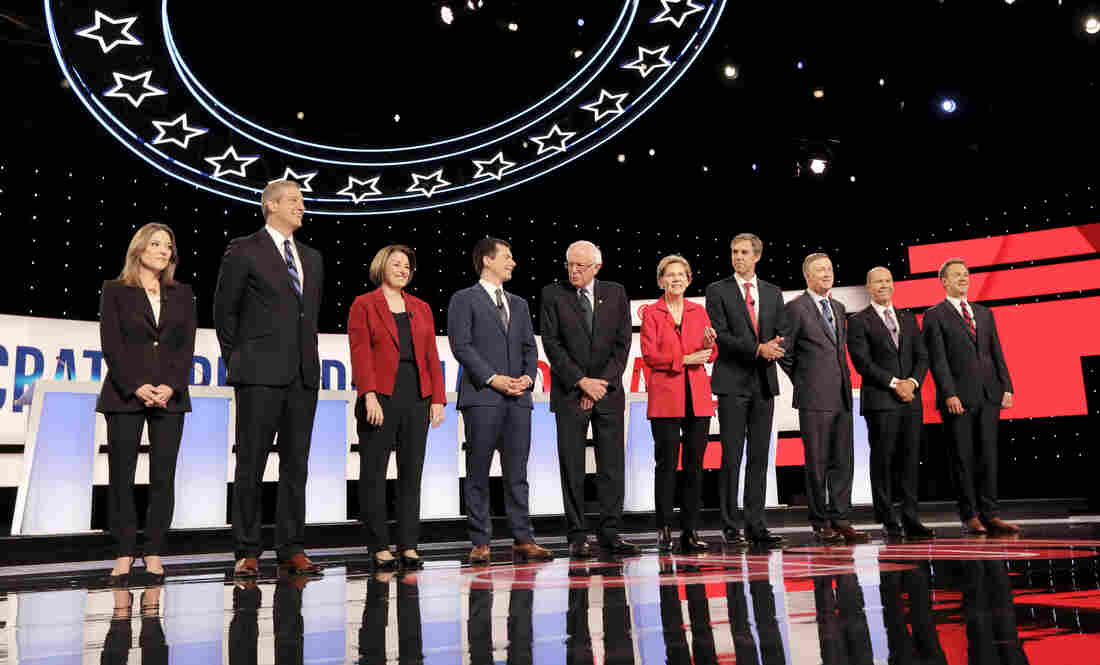 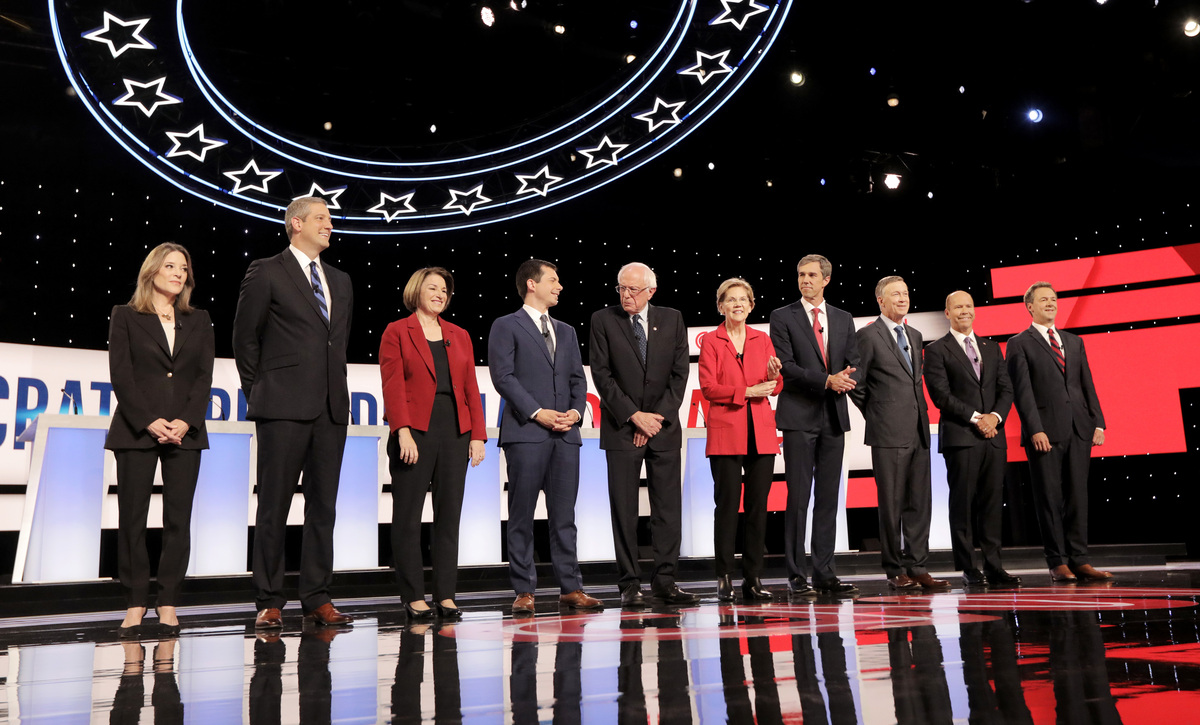 The first 10 Democratic candidates prepare to debate on Tuesday night in Detroit.

Tuesday night's Democratic presidential debate in Detroit was widely expected to pit the two leading progressives in the field against each other. Instead, Sens. Bernie Sanders of Vermont and Elizabeth Warren of Massachusetts had each other's backs in fending off the other eight aspirants onstage.

They gave as good as they got, and emerged at least as strong as either was going in. That was particularly good news for Sanders, who had been perceived as ceding ground to Warren in recent months.

The question of the night was not so much, "Who's more progressive?" — it was more, "Can the Democrats win in 2020 running on their most progressive policies?" In the end, both questions were left hanging in the air: to be continued.

Watch The Highlights: Warren, Sanders Vs. Rest Of Debate

Here are the big takeaways of Night 1 of the July debate:

1. Sanders and Warren were allies, not rivals.

It began when all 10 candidates were introduced by the CNN moderators, who brought them out in the order they qualified for the event (based on polling and donations).

Sanders was first, followed immediately by Warren, who clapped him on the back and shook his hand with an air of shared determination. It was as if their body language said "it's us against them" from the outset.

As the full 150-minute marathon unfolded, Sanders and Warren were often beset literally from all those on either side of them. The framing was largely determined by the CNN moderators, who wanted to know if the other candidates thought Sanders' and Warren's ideas about "Medicare for All" and aggressive action on climate change were out of the mainstream — or just too pronounced to attract swing voters in 2020. 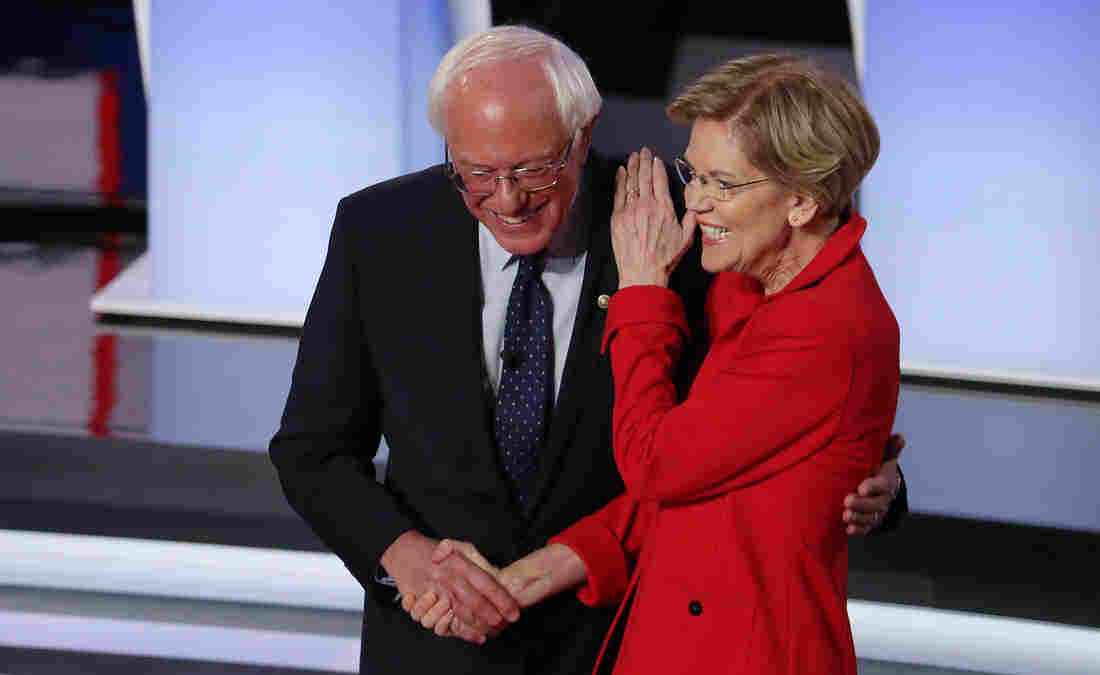 Sanders and Warren greet each other at the start of Tuesday night's debate. Justin Sullivan/Getty Images hide caption 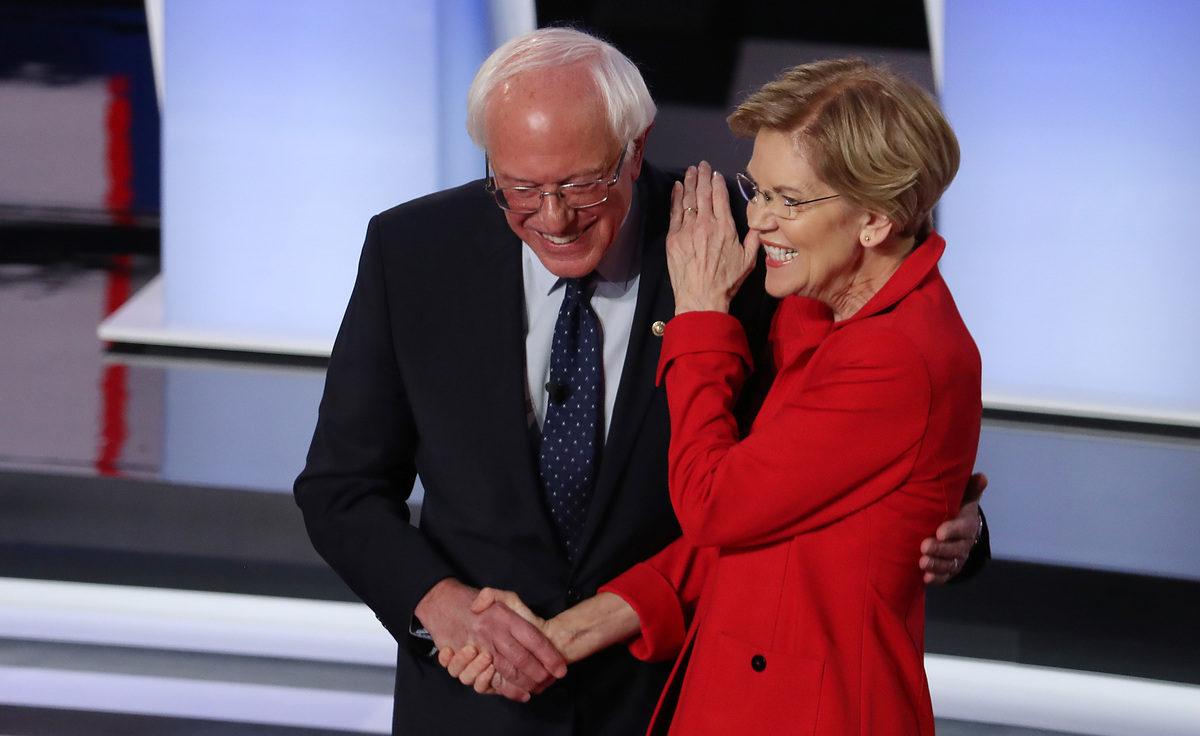 Sanders and Warren greet each other at the start of Tuesday night's debate.

That theme brought some of the more marginal candidates suddenly to the fore, with the first-to-declare, former Maryland Rep. John Delaney having far more air time than in the summer's early round.

Delaney used it to tout his business experience and centrism repeatedly, but that opened him up to Warren's zinger of the night: "I don't understand why anybody goes to all the trouble of running for president of the United States just to talk about what we really can't do and shouldn't fight for."

It may have been a prepared line, but it burst out in a moment of apparent exasperation that made it all the more effective.

Sen. Warren: "I don't understand why anybody goes to all the trouble of running for President of the United States just to talk about what we really can't do and shouldn't fight for...I'm ready to get in this fight. I'm ready to win this fight." https://t.co/lrVE7B6VCO #DemDebate pic.twitter.com/n8kwp3VjpA

2. The stakes were high for lesser-known candidates.

Also getting a welcome opportunity to address the national audience were Montana Gov. Steve Bullock, who entered the race late and had not qualified for the first round; and Marianne Williamson, a self-help author who delivered several earnest sermonettes about love and hate in American culture.

Bullock stressed his credentials as the only candidate who has been elected statewide in a state that voted for President Trump. He also advertised his bona fides on the campaign finance issue. But he seemed off-balance and tongue-tied when the topic turned to nuclear deterrence and the question of the "no first use" pledge.

Electability in states Trump won was also salient for former congressman Beto O'Rourke, who twice claimed he had put his home state of Texas "in play" in 2020 by coming close to defeating Sen. Ted Cruz there in 2018. O'Rourke also seemed more sure of himself than he had been in the Miami debate last month, but that could also be said of all his rivals.

The preparation level was high for this event in part because the stakes have risen so far, so fast. Those not meeting the elevated criteria set by the Democratic National Committee for polling and funding performance will not be on stage when the Democrats next meet in September. At that point, perhaps as few as half of those seen Tuesday night will be onstage again, joining survivors from the 10 who will be onstage in Detroit on Wednesday.

Based on his latest performance, former Colorado Gov. John Hickenlooper may have trouble making the next cut. While he smiled and leaned into his appealingly modest and moderate answers on several issues, he seemed just one in the pack of candidates presenting varying degrees of contrast to Sanders and Warren.

Congressman Tim Ryan has been "on the bubble" and strove to break through in a venue not that far from his district in Youngstown, Ohio. He emphasized his empathy with displaced workers and ripped the Trump administration's trade policies.

But when asked if he would keep Trump's tariff regime on steel or not, he did not have a ready answer other than to attack Trump again. Ryan also attracted adverse attention on Twitter and elsewhere for keeping his hands folded at his waist during the presentation of the colors before the debate. Everyone else on stage stood hand-over-heart. 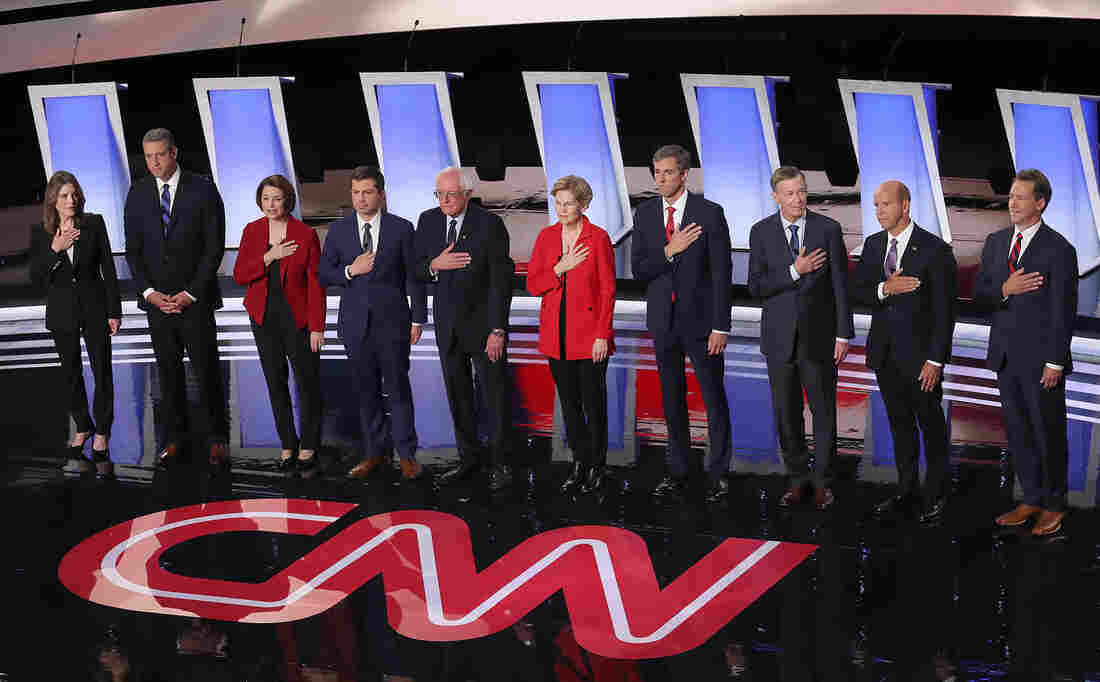 Like Ryan, the other Midwesterners onstage sought something of a home-field advantage. Sen. Amy Klobuchar of Minnesota talked of winning her state plus Wisconsin, Michigan and Iowa.

Pete Buttigieg, mayor of South Bend, Ind., also talked about there being "no such thing as a permanently red state." Buttigieg, at 37 the youngest candidate, also made multiple references to his youth, noting at one point he was "a junior in high school" at the time of the Columbine High shootings in 1999. That brought smiles from several of the other candidates.

Buttigieg was asked directly about his age in contrast with that of the man standing beside him — Sanders, at 77 the oldest candidate. Buttigieg said chronological age was less important than vision, while making a case for generational leadership. Sanders sidestepped the question to talk about income inequality.

Sanders was gently chided by some for raising his voice and waving his right hand, two basic characteristics of his style. He did not alter that style Tuesday night. But overall his performance was far more reminiscent of his rallies and his better debates in the 2015-16 presidential cycle, when he shocked front-runner Hillary Clinton and got more than 40% of the delegates to the nominating convention.

In the June debate, Sanders had seemed unsure of his footing, swatting at challenges from the NBC team and from his rivals and warily eyeing Warren. The veteran Democratic socialist seemed much more sure of himself on Tuesday night.

5. There were noteworthy absences.

Not in evidence on this night were the candidates who have made this the most racially diverse field in either party's history. All the people of color running for this nomination drew into the second night of the debate by lottery.

Issues of race and racism did arise, however, giving Williamson a chance to embrace her proposal for up to $500 billion in reparations payments to the African American descendants of slaves. She called it "a debt that is owed" and immediately set off a Twitter storm, pro and con. The rest of the candidates on stage tried to seek responses that were neither rejecting nor embracing of the cash payment idea.

The debate also did not touch on the issue of abortion, despite the encroachment of anti-abortion forces in legislatures and in the courts.

Even more surprising was the relative lack of talk about the president. He was referred to many times, usually with a vow to defeat him in 2020 that drew reliable applause and cheers from the partisan crowd.

But the moderators had seemingly resolved there would be little daylight between these candidates with regard to Trump. Their clear preference was to explore the areas of disagreement separating these candidates before the field is winnowed over the next several weeks.

A previous version of this story incorrectly said last month's presidential debates were held in Charlotte, N.C. They were held in Miami.