Accessibility links
2020 Democrats Back Assault Weapons Ban, Background Checks And Red Flag Laws Lowering gun violence was one issue on which Democratic presidential candidates spoke with nearly one voice. But researchers question the effectiveness of some of the Democrats' proposals.

From Guns and America 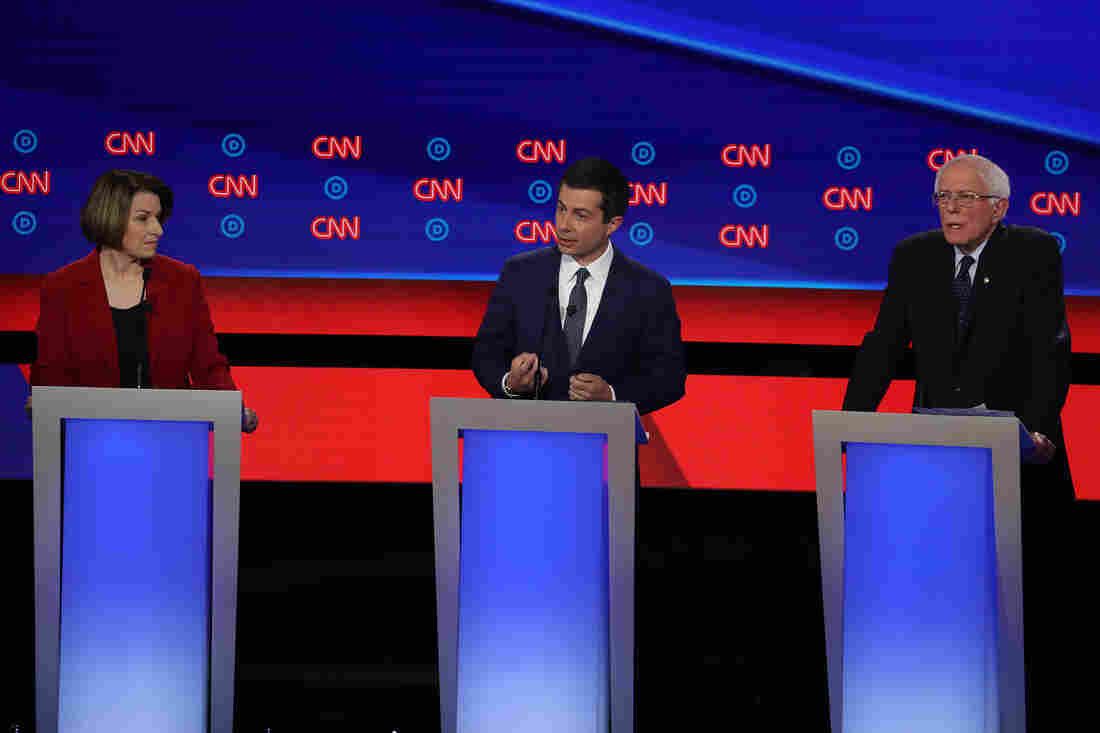 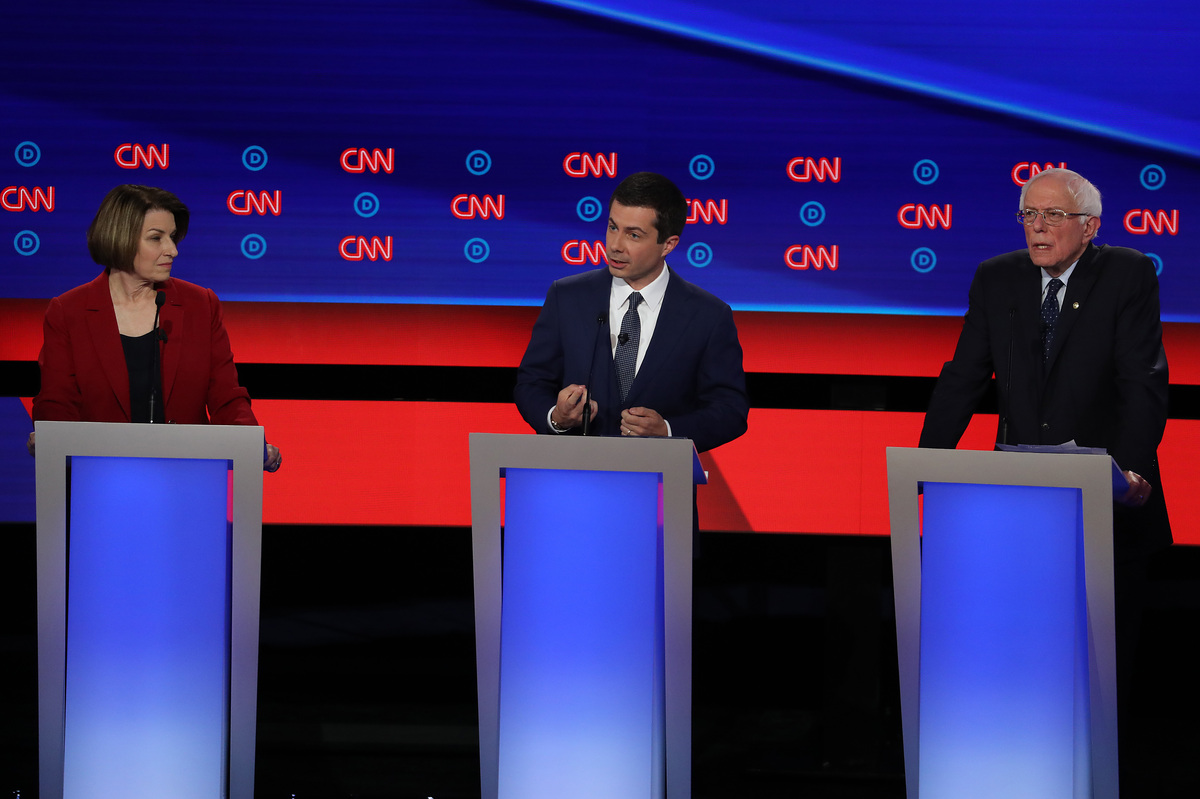 During the first night of the second Democratic presidential debate, the question of how to reduce gun violence emerged as one issue on which the sometimes-splintered Democratic Party speaks with as close to one voice as it can.

"As your president, I will not fold," vowed Sen. Amy Klobuchar, D-Minn., before rattling off her list of proposals, which included background checks, an assault weapons ban and "something" about magazines.

"We can talk about these policies, but we already know the policies," said South Bend, Ind., Mayor Pete Buttigieg, after listing a similar set of policies.

Candidate after candidate repeated a list of proposals they would try to enact if they become president: universal background checks, a so-called assault weapons ban, restrictions on magazine capacity, and laws to prevent those with history of mental illness or domestic violence from buying guns.

But researchers who study gun violence question how effective some of the Democrats' proposals would actually be if turned into law.

Undoubtedly, the most popular policy proposal among all the Democratic candidates and the American public involves requiring so-called universal background checks that would force virtually all gun sales to undergo the same federal background check currently required of gun purchasers at gun stores and other professional retailers.

Private transactions at gun shows or through websites such as Armslist would still be possible but would likely require sellers to transfer the weapon to a licensed dealer to run a background check before completing the transaction. Most universal background check proposals include exemptions for transferring guns between family members and for borrowing guns.

But while researchers see evidence that states that have implemented universal background checks have seen drops in gun trafficking, Daniel Webster, director of the Johns Hopkins Center for Gun Policy and Research, says, "We haven't seen that that actually is reducing firearm-related deaths."

In 2018, Johns Hopkins researchers studying urban areas found that universal background checks were actually associated with an increase in firearm homicides if the checks were not accompanied by a permitting system for gun purchasers.

According to the Giffords Law Center, 12 states and the District of Columbia currently require universal background checks.

There is little agreement on what is and isn't an "assault weapon." Probably what comes to mind is something like an AR-15 — an all-black semi-automatic rifle that chambers the next bullet each time a shooter pulls the trigger.

Your Guide To Night 2 Of The Detroit Democratic Presidential Debates

"I think part of the reason 'assault weapons' keep coming up is that it's really the most horrific kinds of events that very, very commonly these weapons come into play. So it's understandable that there's a lot of fear and voter concern about that," said Webster.

"But if your overall plan is to significantly reduce gun violence, [banning assault weapons] can only address a fairly small portion of the problem," he said.

Mass shootings make up less than 2% of gun fatalities. FBI data from 2016 shows handguns are the most common murder weapon and are used in more than 60% of murders involving guns.

Assault-style weapons were banned in the U.S. from 1994 to 2004, but an official report on the measure found the outcome on crime was "mixed," because of exemptions written into the law. A recent RAND study also found inconclusive evidence that banning assault weapons and high-capacity magazines had an impact on either homicides or suicides.

While American homicide rates have been on the decline since the 1990s, there has been a more recent spike in murders between romantic partners. Criminologists say that increase is entirely due to murders committed using guns.

A Johns Hopkins and Michigan State University analysis found that how well these laws works depends on whether they cover dating partners, and temporary restraining orders. Researchers saw the biggest impact on intimate partner homicides when firearm prohibitions extend to violent misdemeanor convictions regardless of the kind of victim.

These state-level laws let courts order the temporary removal of guns when someone poses a risk to themselves or others. The measure drew attention after the 2018 Parkland school shooting, but has mostly been found to reduce firearm suicides.

Suicides made up nearly 60% of annual gun deaths in 2016 the U.S. according to the Centers for Disease Control and Prevention. Researchers say Connecticut has seen a 13% drop in gun suicides when its risk-based firearm law started getting enforced. Indiana has also seen a 7% drop in gun suicides.

One policy that researchers say does have a significant role in reducing gun violence did not come up during the debate on Tuesday night. Nine states and the District of Columbia have handgun purchaser licensing laws. It means applying, usually in person, to law enforcement for a license to own a gun and the process includes both a criminal background check and fingerprinting.

"The fingerprinting process in particular allows for a much more accurate way to identify criminal records," said Webster. "Basically you can't fake your fingerprints."

Webster said researchers believe licensing serves as a deterrent for both crime and suicide. In Connecticut, where handgun licensing has been in place since 1995, the law is linked to a 40% drop in firearm homicides, and a 15% drop in suicides in its first 10 years. Conversely, when Missouri repealed its handgun licensing law, the state saw increases in both gun homicides and suicides.