Accessibility links
Delaney, Moderates Target Warren And Sanders At Democratic Debate Moderates took aim at the liberal policies of Bernie Sanders and Elizabeth Warren on health care and taxes at the Democratic debate, arguing that their stances could ensure a second term for Trump. 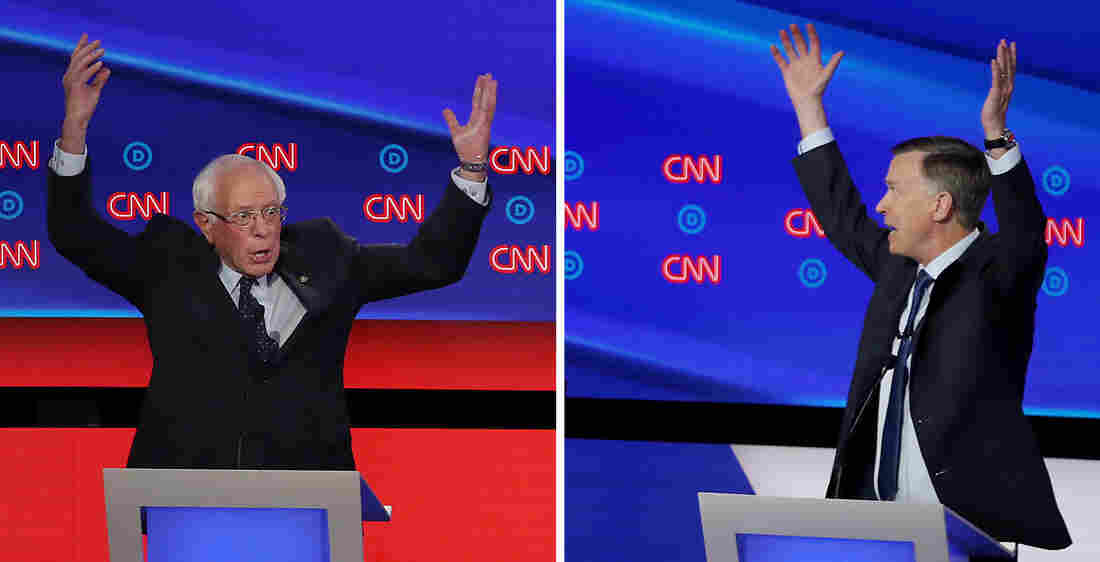 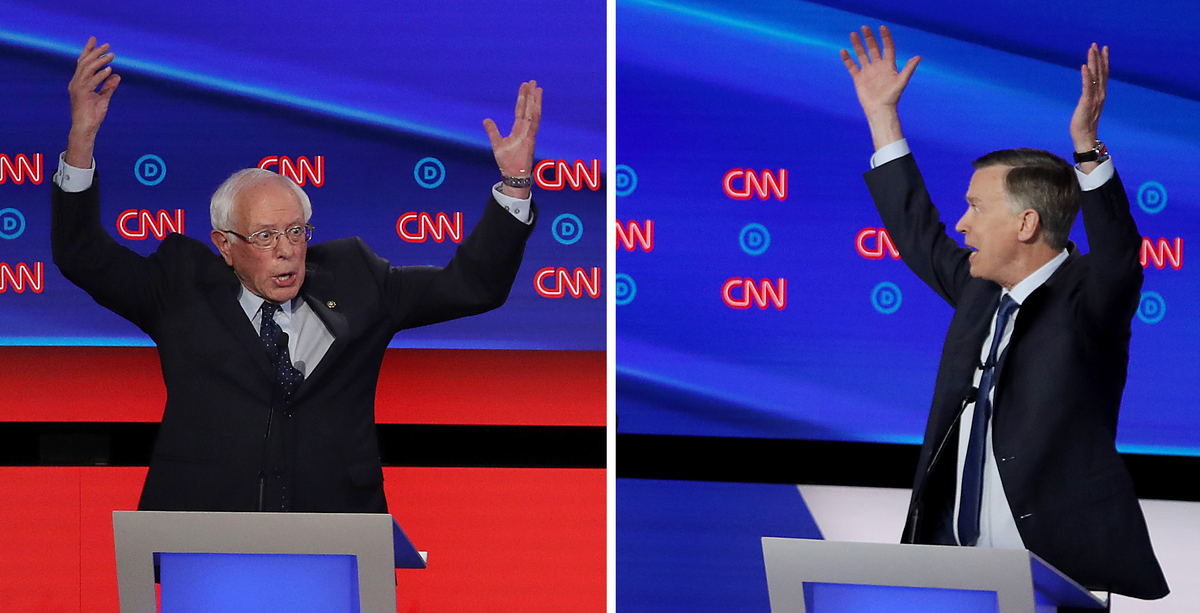 Ideological lines were drawn early and often during Tuesday night's presidential primary debate between the progressive and moderate wings of the Democratic Party.

It was the clearest delineation yet this primary season, with centrist candidates such as former Maryland Rep. John Delaney, former Colorado Gov. John Hickenlooper and Montana Gov. Steve Bullock making arguments similar to those that Republicans have made — that many of the liberal policies Democrats such as Vermont Sen. Bernie Sanders and Massachusetts Sen. Elizabeth Warren have championed on health care and taxes could ensure a second term for President Trump.

"Let's not kid ourselves — [Trump] will be tough to beat," Bullock said in his debate debut, cautioning against "wish-list economics" to create liberal policies, including "Medicare for All," which dominated the start of the debate and was perhaps the biggest touchstone issue illuminating differences within the field.

The Democratic Debate Over Medicare For All And Middle Class Taxes, Explained

Delaney — a former backbench, wealthy congressman who has generated little buzz for his campaign despite running the longest — tried to draw historical parallels in warning that a nominee too far to the left would doom the chances of Democrats. He compared the duo of Sanders and Warren to George McGovern in 1972, Walter Mondale in 1984 and Michael Dukakis in 1988 — all of whom were crushed by their Republican opponents in presidential elections.

"Democrats win when we run on real solutions, not impossible promises," Delaney argued.

"I don't understand why anybody goes to all the trouble of running for president of the United States just to talk about what we really can't do and shouldn't fight for," Warren fired back. "I don't get it."

Why would anyone go through all the trouble of running for President just to get up on stage and talk about what’s not possible? @ewarren is ready to fight. pic.twitter.com/fxHTGp78IG

Warren also pushed back as other candidates challenged her and Sanders' support for Medicare for All, which would replace private health insurance: "We're not going to solve the urgent problems that we face with small ideas and spinelessness."

The fireworks, which started immediately, shouldn't be that surprising, given that Warren and Sanders were at center stage and that the lower-polling candidates, who need to generate momentum to even make the September debate, had to ding the top-tier hopefuls somehow. The two friends and ideological equals have had a détente of sorts throughout the campaign, and that helped them take a sort of tag-team approach against more moderate candidates on the edges of the stage.

Warren took a more measured, reasoned approach, while Sanders showed more outrage, throwing his hands up in disgust during one exchange with Hickenlooper. But the two never went after each other. At one point, when Sanders accidentally interrupted Warren, he stopped himself and apologized — a courtesy he didn't afford other opponents.

Ohio Rep. Tim Ryan also took issue with Sanders' Medicare for All bill, claiming that it wouldn't help union members and senior citizens. "I do know it. I wrote the damn bill," Sanders shot back when the two tussled over the details.

Sanders took much of the friendly fire from his fellow competitors, while Warren tried to make more nuanced arguments with personal details and examples.

In his closing statement, Hickenlooper echoed the sentiments of his more centrist colleagues in a different way, arguing that "I'm as progressive as anybody up on this stage, but I'm pragmatic."

South Bend, Ind., Mayor Pete Buttigieg, who hasn't fit neatly into either camp, argued that Republicans were going to paint Democrats with a broad brush anyway, so they should just choose what is best for America, regardless of political implications.