Accessibility links
Review: 'Jane The Virgin' Brings One Of TV's Best Shows To A Marvelous Close It's hard to end a show as beloved as Jane The Virgin, but the Wednesday night finale was funny, sad, silly and ultimately hopeful. 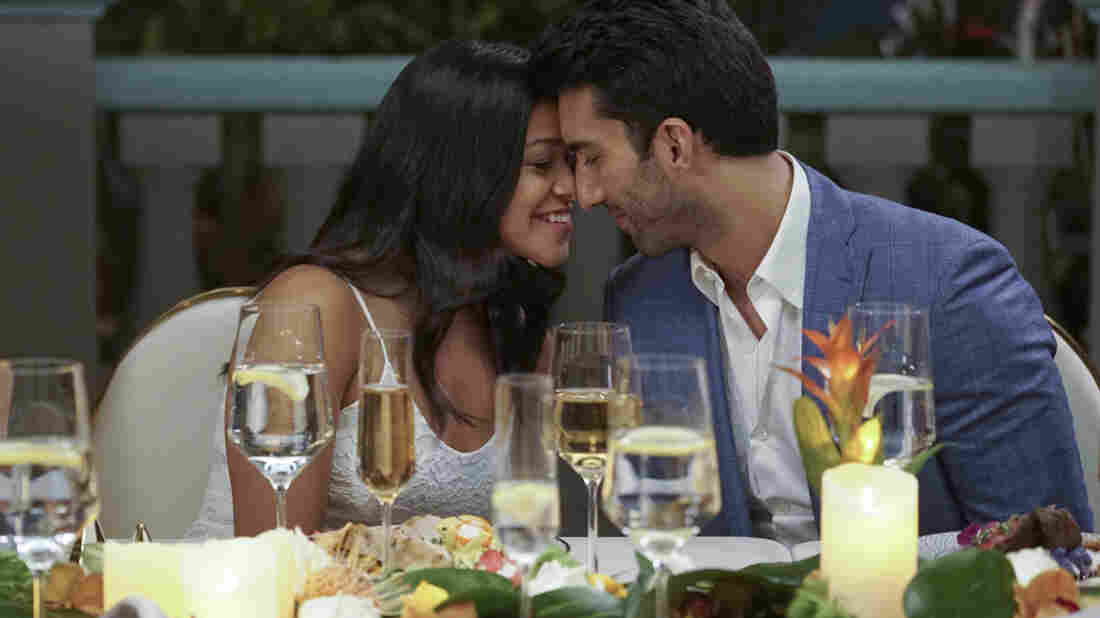 Gina Rodriguez and Justin Baldoni as Jane and Rafael, whose wedding was the centerpiece of the finale of Jane The Virgin. Kevin Estrada/The CW hide caption 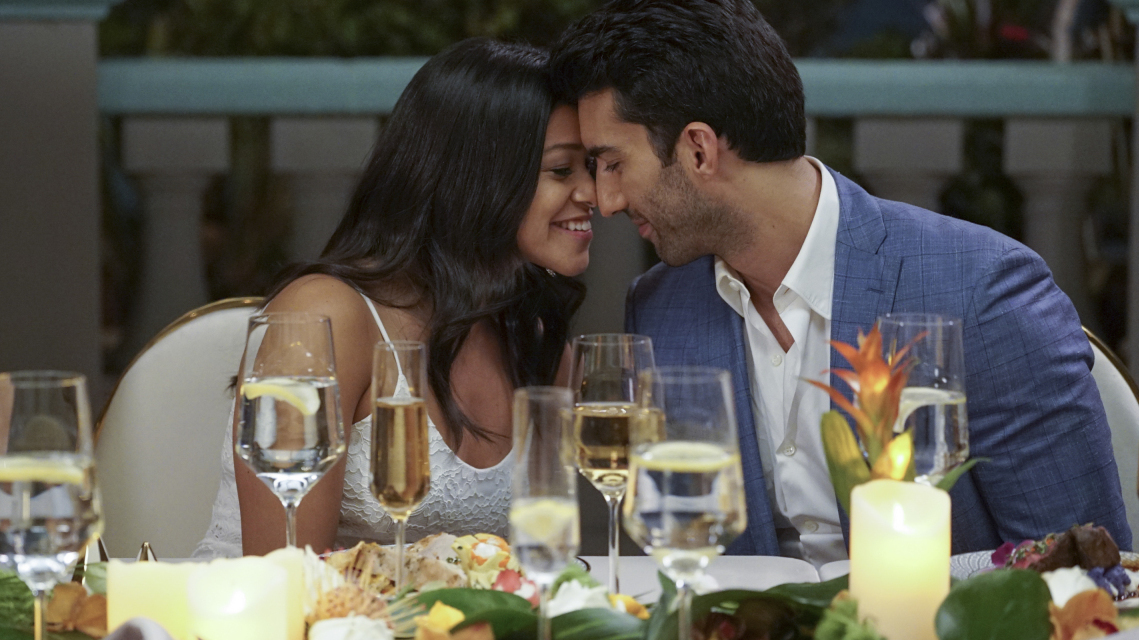 Gina Rodriguez and Justin Baldoni as Jane and Rafael, whose wedding was the centerpiece of the finale of Jane The Virgin.

We should have known Jane The Virgin would know how to execute a beautiful finale, but what a relief to actually see it.

Jane has been a delight since it premiered in 2014. Loosely based on a Venezuelan telenovela, it carries some expected markers of an actual telenovela (fake deaths! evil twins!) while also working as a satirical take on the form. It employs formal playfulness like typing words onto the screen like captions so you can be reminded who people are, since nobody could be expected to remember everything. And it has a narrator, voiced by Anthony Mendez, who gasps and frets, then comforts us when sad events plague Jane and her family. And that sexy narrator begins his last introduction, his last "let me sum up" segment with, yes, the phrase, "Ah, friends."

Ending Jane is not like ending almost any other show on TV. As the writers acknowledge within the final episode, a telenovela must end with a bang, with wishes that come true, with tears and reconciliation.

To step back a moment, Jane had a tremendous number of threads to tie up. The narrator's montage after "Ah, friends" could only scratch the surface as it took us all the way back to the very beginning. We remembered Jane's initial accidental insemination with Rafael's sperm in season 1, which disrupted her relationship with her boyfriend Michael, who eventually became her fiance and then her husband, despite the fact that she also had feelings for Rafael, with whom she now shared a child. Meanwhile, Rafael's initially awful wife Petra, who became his awful ex-wife Petra, was Jane's nemesis at first. Petra also managed to inseminate herself and wind up having Rafael's twins (long story), then, over time, she came out as bisexual, started and then lost a loving relationship with a woman named JR, defeated some evil family members, grew as a person, and emerged as Jane's dear friend. Michael, meanwhile, got shot, recovered somewhat, died anyway, and came back from the dead after Jane had spent years grieving and was back with Rafael. But by the time Michael came back, he and Jane had been apart for years and had changed too much, and while it was nobody's fault, they said goodbye again, and Michael went off to live in Montana where he's happy. Jane got engaged to Rafael, sold her second book, saw her father Rogelio marry her mother Xiomara, and saw her grandmother Alba marry her love Jorge, too.

Take a deep breath here. You can see why they needed a narrator.

The hardest part of ending this show — what was always going to be the hardest point of ending this show — was dealing with Jane's very real love stories with both Michael and Rafael. Since the decision was to conclude with Rafael and Jane married, it was a very smart choice to settle the last piece of the Michael story last week. Fans saw enough of Michael to know that he is happy, living in Montana with a new relationship and a baby on the way. But keeping him present during an episode that focused on Jane and Raf's wedding would have seemed like a tease, and would have made it seem like Jane was still primarily defined as a woman caught between two men, and the show is no longer that.

Instead, the finale had room to breathe as exactly what it was: the conclusion of Rafael and Jane's love story as told on Jane The Virgin and, as Raf and Jane discussed, the beginning of the rest of their lives. That doesn't mean all the other stories didn't matter or were abandoned — it was still a whirlwind of activity. Rafael's birth parents were found and revealed to be deceased, and he was sad, but realized he had family nevertheless. Jane's friend Lina who had wanted Jane to donate an egg so she could get pregnant showed up pregnant with a different donor egg! Petra and JR were reunited just as the wedding was about to start! Xo and Rogelio were moving to New York, then Xo got cold feet, then her feet warmed up again! (This was a really lovely inversion of the usual dynamic in which the child moves away from the parent and has to deal with striking out on her own.)

Obviously, Rita Moreno returned as Rogelio's mother. Nobody would deny you that. And the narrator threw in a little factoid about himself that some fans, but not all, had predicted.

There was, of course, time for an outbreak of wacky hijinks on the morning of the wedding: Rafael rushed Jane's last-minute changes to the printer before the galley copies of her book were to be printed (THIS IS NOT HOW THIS WORKS!), but he wound up being thrown in jail. That sent Jane on a journey across town, which ultimately led her through a crowd of marathoners, onto a bus, figuring out how to pick up her groom and get her whole family to the wedding. There, Alba married Jane and Raf in Spanish. They both had trouble getting through their vows because they were crying, so they simply exchanged the papers they'd written on. It's a beautiful ending.

The elephant in the room, of course, is that there are "Jane belongs with Michael" people, and some will never forgive the show for ending this way. Some will tell you flat-out that no ending where Jane was with Rafael would do. Others will tell you that if she wasn't going to end up with Michael, he should never have come back from the dead in the first place — they could have lived with Jane being forced to settle for someone besides Michael, but cannot accept she ever would have chosen someone else. They feel they were teased. Still others find the ending unfair to Michael: Why should Rafael get to be happy and Michael doesn't?

These are very natural responses to this ending, I think. I was always a Rafael person, to the point where I didn't understand the concept of Michael people for a good while into the show. I assumed everyone distrusted Michael in the same way I did; I assumed Jane getting past her guilt-tripping, kind of possessive boyfriend was what the show was about. And there came a time in the third season when I felt like the deck was overwhelmingly becoming stacked — Michael was suddenly perfect, everything he did was right, all his flaws had vanished, he and Jane were a perfect couple, they got married, and it seemed very boring to me. But then when he died, I felt like I understood what the writers had been doing, particularly as the third and fourth seasons tackled Jane's grief.

So when he came back this season, I thought, "Oh, no." Even though Michael seemed to have recovered from his early Nice Guy Syndrome (not the problem of being a nice guy, but the problem of seeming embittered by not getting everything he wanted from the woman he wanted simply because he's such a nice guy), I still didn't want that ending. Just as other people won't want this one.

But I did. I really, really did. I wanted the little tidbits, and the kids reading from the book about love, and Xo having her own growing-up moment, and Rogelio wanting Rafael to call him "Dad" (after years of being a Michael guy himself, Rogelio learned to love Raf). I wanted the bus and the passengers and Jane getting dressed in the back with her mother and her grandmother. It was satisfying and moving and I cried, and as a critic, it means so much to see a show land the creative plane this successfully. Jane has been a balm, and as much as it will be missed, what a beautiful sendoff.