Accessibility links
FBI Questions American Grads Of China's Prestigious Yenching Academy In the last two years, at least five graduates have been approached by agents to gather intelligence on the program and to ascertain whether they have been co-opted by Chinese espionage efforts.

Listen · 4:10 4:10
American Graduates Of China's Yenching Academy Are Being Questioned By The FBI 4:10 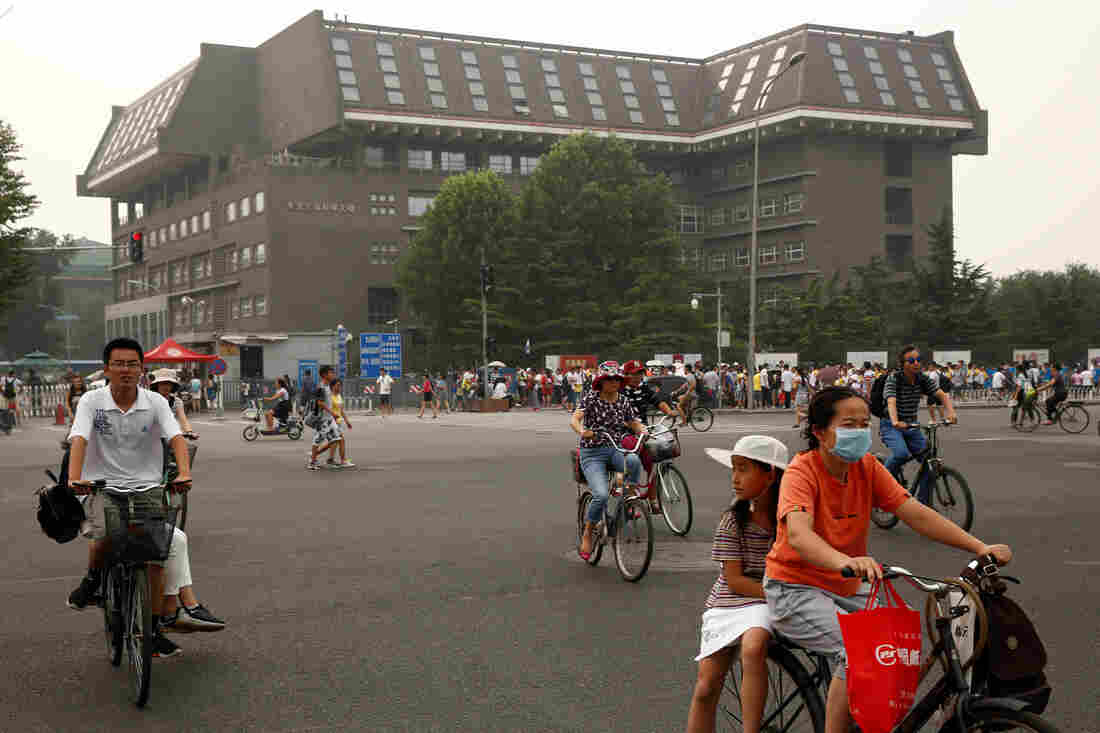 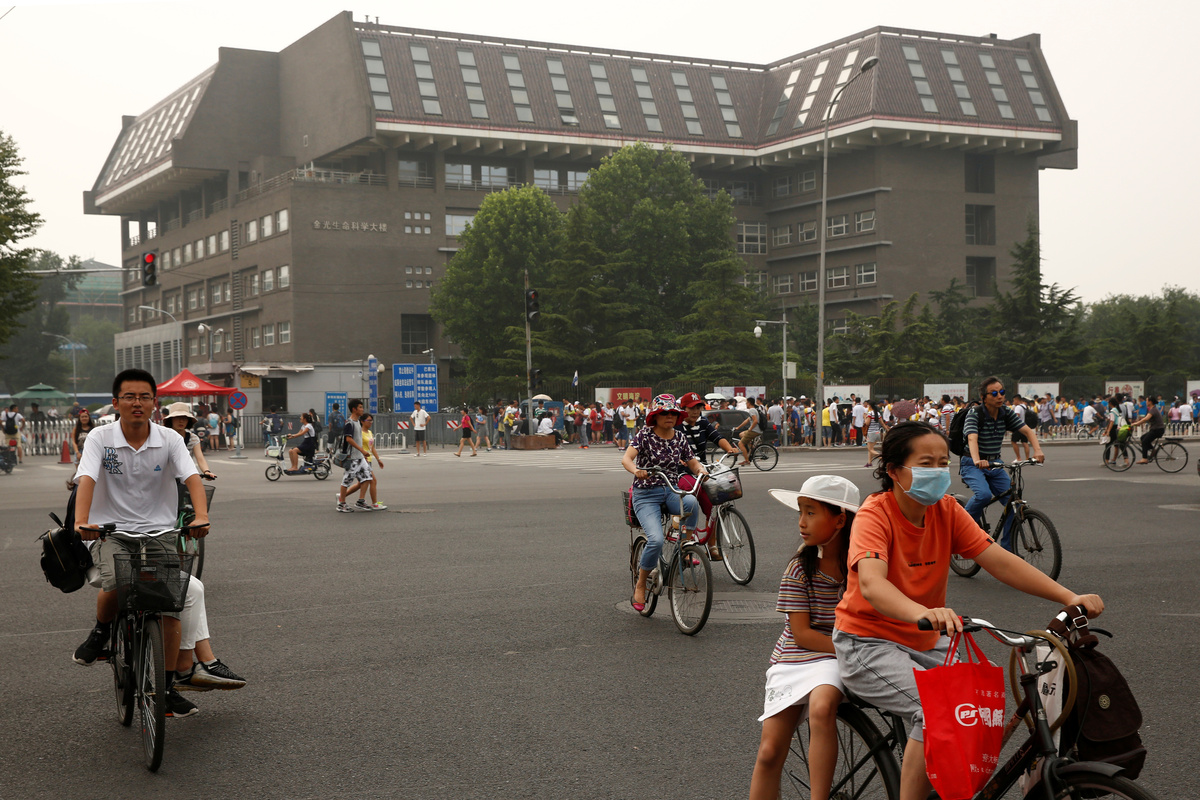 People cycle past a building at Peking University in Beijing in 2016. The university hosts Yenching Academy, a prestigious graduate studies program.

A sudden knock at one's door. An unexpected call to meet off campus. Surreptitious visits to family members.

American graduates of the prestigious Yenching Academy, a one- to two-year master's degree program housed at Beijing's elite Peking University, are being approached and questioned by the FBI about the time they spent in China. In the last two years, at least five Yenching graduates have been approached by agents to gather intelligence on the program and to ascertain whether they have been co-opted by Chinese espionage efforts.

Brian Kim is one of them. Five months ago, Kim received a call from an unfamiliar number. "It was a person who claimed to be an FBI agent, and I immediately thought it was a scam call," Kim recalls.

Now beginning his second year at Yale Law School, Kim was able to verify the agent's identity with the local FBI office in New Haven, Conn., the next day. He arranged for two FBI agents to meet him at a coffee shop near Yale's campus, where, over the next hour, they grilled him on his personal and academic history.

"It became clear to me, maybe three-quarters of the way through, that they were actually most interested in China," Kim says.

One of the agents asked if anyone in China had tried to recruit Kim for espionage efforts. Who had encouraged Kim to apply for the Yenching program in the first place?

"I literally told them the Princeton fellowship office" had recommended he apply, says Kim, who has a bachelor's degree from Princeton University. "There was a moment of levity where we're just both treating this experience like, are we doing this right now?"

The mistrust of Yenching Academy, dubbed the "Rhodes Scholarship of China," illustrates just how far fears of Chinese espionage have permeated among the U.S. defense and intelligence establishment.

Once cast as a way for America's best and brightest to build relationships with and improve understanding of China, academic programs and collaborations are now falling under scrutiny. FBI agents have been lobbying U.S. university administrators to monitor Chinese researchers and students working in certain science and technology fields. Federal funding agencies including the National Institutes of Health are also investigating academics for not properly disclosing Chinese funding or research done with Chinese institutions.

Suspicion of Yenching Academy may stem in part from its funding — it is partially supported by China's education ministry. But Yenching administrators tell NPR they have never been contacted by the FBI or other intelligence agencies over national security concerns and were not aware of their graduates being questioned upon return to the U.S.

"They don't have time to have made extensive contacts in the area that would be sensitive," David Moser, Yenching's associate dean since 2017, told NPR by phone. "I have not seen anything that would indicate problems. But of course, it's only recently that U.S.-China relations [have] gotten so fraught and with tension. So who knows?"

In an emailed statement, Yenching Academy said the FBI scrutiny had not disrupted normal operations, but "we are deeply concerned about the possible effects of unwarranted official scrutiny on the morale and career development of our alumni, and we strongly request that the U.S. government cease any intrusive or unjustified investigations of our Yenching scholars."

The FBI said in a statement emailed to NPR: "In an attempt to fulfill our national security mission, and in the hopes of better protecting U.S. citizens, the FBI will sometimes conduct voluntary interviews with individuals who have studied or conducted research abroad, often at their request. The goal of these interviews is to identify potential security risks and to protect U.S. citizens from illegally — and perhaps unwittingly — supporting foreign government interests."

When reached for comment, the FBI also highlighted the case of Glenn Duffie Shriver, who was convicted in 2011 of spying for the Chinese government. According to the Department of Justice, Shriver, who had studied abroad in China as an undergraduate, was recruited by three Chinese intelligence officers while living in Shanghai after graduation and encouraged to apply for U.S. intelligence positions.

"Foreign intelligence services have increasingly chosen to target and recruit academics, researchers, and others to conduct activities on behalf of foreign governments. Past investigations have identified Chinese universities as locations where such targeting sometimes occurs," according to the FBI statement. "These investigations have shown that foreign governments and intelligence services often seek to identify and develop relationships with U.S. students, scholars, and researchers who can help them gain access to information and persons that fulfill the foreign government's international intelligence agenda."

Yenching is no stranger to controversy. Ironically, when the program was launched in 2015, it was criticized in Chinese academic circles for being a vehicle of American soft power and influence.

"'English Chinese Studies' is simply a large-scale transplant of Western Chinese studies and Sinology to Peking University," two Chinese professors wrote in a widely circulated editorial for the news website Guancha in 2014.

In the U.S., Yenching was welcomed by China watchers and policymakers alongside the Schwarzman Scholars program — a rival, 3-year-old master's program funded by billionaire financier and Trump confidant Stephen Schwarzman — as an important component of people-to-people diplomacy with China. There are no known instances of Schwarzman students reporting scrutiny from U.S. authorities.

About 30% of Yenching's approximately 125 students each year are American or Canadian and a fifth come from mainland China.

"We know that bonds built between students of our two countries will last a lifetime," Michelle Obama said in a handwritten note, after visiting the Yenching campus in 2014.

But the bonds appear to have led to suspicion. Over the last year, local FBI agents have approached Yale several times, asking university officials to disclose the identities of Chinese and Chinese-American researchers and students working in certain laboratories, according to a Yale employee who declined to be named because they were not authorized to speak publicly.

Yale administrators refused. The experience in part prompted Yale President Peter Salovey to publish an open letter on the university website in May "to affirm Yale's steadfast commitment to our international students and scholars."

Yale Law School declined to comment but the school's Dean Heather Gerken told NPR by email that "we are extremely protective of our students and care very much about this issue." When asked to comment, the university referred NPR to Salovey's letter.

Other students accepted to Yenching Academy never made it to Beijing. When two West Point graduates were admitted to the fourth incoming Yenching class last year, the Department of Defense intervened and banned them from attending, according to two people with knowledge of the matter.

Kim hopes to serve in the public sector on Korean Peninsula issues, given his Korean language abilities and background in policy. But, he says, "Just the idea that somewhere in D.C., there is a file on me and that somebody thought I was a threat to the national security system is a very disturbing thought."