Accessibility links
Maddening Men Are Strangely Sympathetic In 'This Is Not America' Jordi Puntí's new short story collection is full of men living on the edge — almost always because they've put themselves there. They're maddening characters, and Puntí regards them with sympathy. 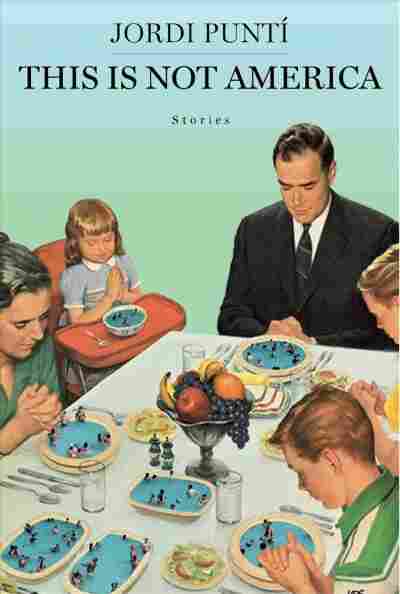 This Is Not America

Title
This Is Not America
Subtitle
Stories
Author
Jordi Punti

"Vertical," the first story in Jordi Puntí's new short story collection, This Is Not America, opens with the narrator smoking cigarettes and walking the streets of Barcelona late at night. His route seems aimless at first, but his motivation is clear: he's haunted by the memories of Mai, his late girlfriend, which have been "gently fading away ... very slowly dispersing, and the days go by and you keep seeing it even though it's no longer there, and you reach a point when you can see it only because you imagine it, because you've seen it before and you know it was there."

Later, the narrator reveals that he's using his footsteps to trace his partner's name in the streets of the city, a game that he and Mai used to play when they were sober and bored, making one of their frequent attempts to recover from alcoholism. The narrator survived; Mai didn't. "No, he'll never forget her," Puntí writes. "Mai. Never. He knows that. If he's writing her name, it's only so the city will remember her." It's a gorgeous story of love and loss with an ending that's as dark as it is heartbreaking.

And that makes it a perfect beginning to This Is Not America, Puntí's third book to be translated into English. The men in Puntí's stories are all wandering through their lives, constantly at loose ends, looking for something they can't quite articulate. It's an excellent book from a perceptive and unshowy writer.

Will You Love This Book In All Its 'Damaged Glory'? Maybe

This Is Not America takes its name from a 1985 song by David Bowie and the Pat Metheny Group, and music plays a large part in some of the book's stories. In "Consolation Prize," a man named Ibon encounters a stranger named Emili in a park where he's taken his dog to play. Ibon mentions his love for the Scottish post-punk band Orange Juice; Emili mentions he used to date a woman named Anna who was obsessed with the group.

Ibon develops a sudden and inexplicable obsession with Anna, and becomes determined to learn more about her and maybe even find her: "He needs to put an end to this, and the sooner the better. He's desperate to get some detail that will put her in the real world, in the same city, some clue that will make him tangible, carnal, sexual..." His infatuation leads him to play the Orange Juice song "A Place in My Heart" over and over again. (It's a fitting choice: the song is about a man trying to win over a woman who's called him "an obsessive / and more than just a mite possessive.")

The story ends with an air of disappointment, as Ibon realizes there's no way Anna can live up to the woman he's created in his mind — like many of Puntí's characters, Ibon is convinced that his happiness is dependent on someone who doesn't, who can't, live up to his overly high expectations.

That's the case with Mauri, the narrator of "Seven Days on the Love Boat," who's planned a surprise romantic anniversary trip with his wife. After the two have a fight — they "squabbled over all kinds of stupid issues and had built a castle of mutual rancor too weighty and too hard for us to bear" — Mauri cancels the trip and decides to buy a solo ticket to a weeklong Mediterranean cruise. He's not interested in sightseeing; his stated goal is to cheat on his wife: "I decided to reinvest all the money against my wife, which is to say to extract some kind of sexual yield from it."

The men Puntí writes about live on the edges, but for the most part, they've put themselves there ... and Puntí regards them with sympathy, but never valorizes their usually unfortunate decisions.

On the cruise, Mauri befriends Sam Cortina, an Italian American lounge singer and pianist "living on the fringes of human passions." Mauri accepts romantic advice from Sam before realizing that the singer's life is in shambles — in Mauri's quest to exact revenge on his wife, he's taken counsel from a man uniquely unqualified to provide it. Mauri is a typical Puntí chracter: fueled by longing and laid low by choices that can generously be called self-defeating.

And that's what makes This Is Not America such a fascinating book. The men Puntí writes about live on the edges, but for the most part, they've put themselves there, and can't figure out how to extract themselves. They chiefly have only themselves to blame for their troubles, although most of them either don't realize it or choose not to. They're maddening characters, and Puntí regards them with sympathy, but never valorizes their usually unfortunate decisions.

It's an accomplished book, filled with bone-dry humor and incisive observations about people who desperately need to connect, but have no idea how. It's also a powerful literary reminder that nostalgia and magical thinking both threaten the way we relate to one another, and to ourselves: "The passage of time burns memories, too, first turning them into dry parchment, after which the combustion starts at the corners, but at least it grants us the illusion of experience."