Accessibility links
Joe Biden Battles Through Democratic Debate, Bearing Slings And Arrows In format and style, the second CNN debate was almost a clone of the first. Once again, the emphasis was on finding points of contention and stoking the tension between candidates. 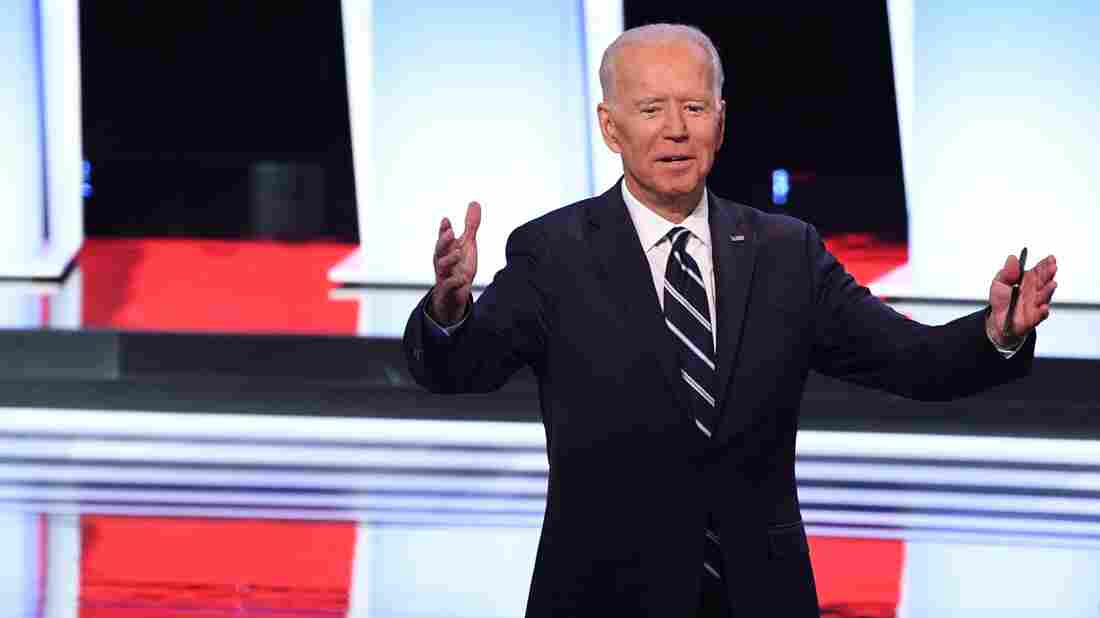 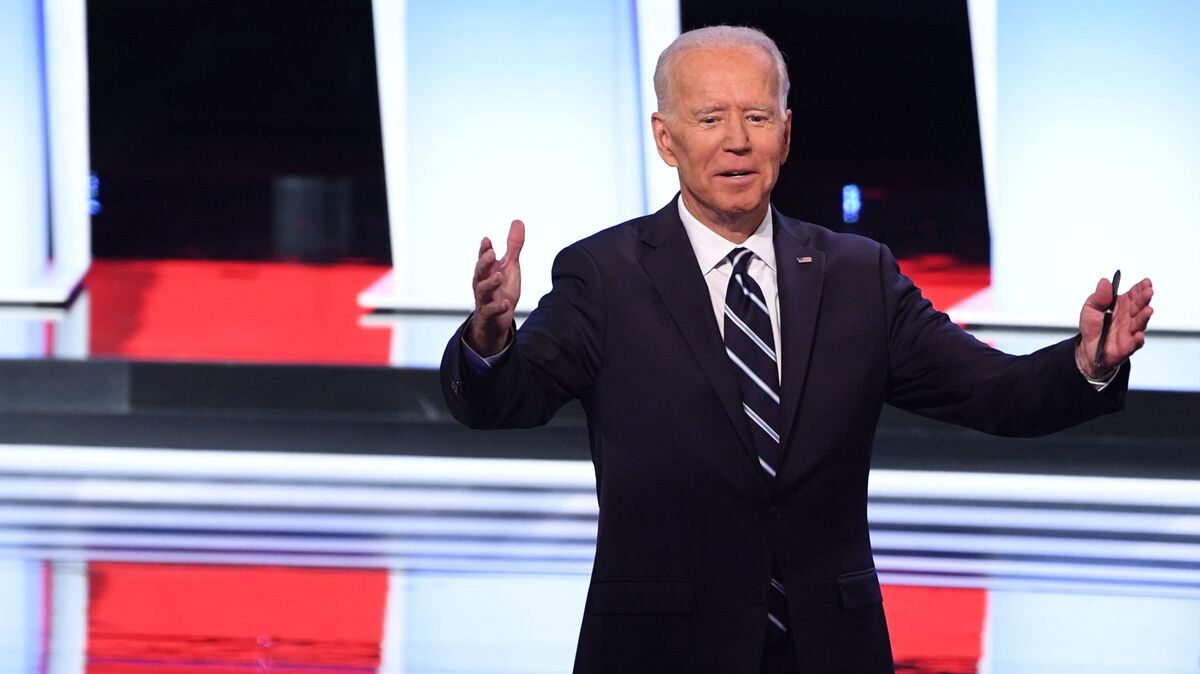 The second night of the Democratic debates in Detroit did not stray from its predicted script: It was open season on front-runner Joe Biden right from the start.

But it was also something of a free-for-all, with every candidate for himself or herself. And the intensity and outcome of the exchanges may have come as a surprise to some of the people onstage.

Unlike the first night, when two featured performers (Sens. Bernie Sanders and Elizabeth Warren) collaborated against the rest of the field, Wednesday night was an extended crossfire focused on the debaters at center stage.

Biden, the clear leader in national polls, stood at the epicenter flashing his toothsome, squinting smile as often as he could — while also looking befuddled or lost at times. His shorter answers tended to be crisp, while longer ones wandered or lost focus at times.

To his left stood Sen. Kamala Harris of California, who at last month's debate in Miami had assailed Biden's onetime stance on school busing and propelled herself into the top tier of candidates. Harris was back with fresh ammunition about Biden's performance on criminal justice and other issues, but the former vice president was prepared this time.

He began his new approach with a rather cryptic aside to Harris during the introductions, saying with a grin: "Go easy on me, kid." While some saw this as pure Biden badinage, many in the Democratic Twittersphere sensed disrespect in calling a female senator "kid."

Harris was in no mood to take it easy, highlighting among other issues the number of deportations carried out while Biden was vice president. Biden came back with a defense of former President Barack Obama's overall approach to immigration, including his Deferred Action for Childhood Arrivals initiative for DREAMers. But Biden did not directly answer her accusation regarding deportations.

Instead, he compared his own position on busing in an earlier decade to a position Harris herself had advocated at one time. When she criticized him for supporting legislation that swelled the ranks of federal prisoners, Biden came back at Harris' reputation as a tough criminal prosecutor in California.

Biden got some backup when one of the lesser-known candidates — Rep. Tulsi Gabbard of Hawaii, who is also a veteran — turned on Harris with an accusation that she withheld evidence as a prosecutor that would have helped a defendant in a capital case.

Harris, seemingly taken aback by this and other charges from Gabbard, denied the statements and stood by her record — but also seemed knocked off balance.

Standing to Biden's right throughout the evening was Sen. Cory Booker of New Jersey, who scoffed at Biden for saying that he would rejoin the Paris agreement on climate change. "Nobody should get applause for [that]," Booker said. "That is kindergarten."

As expected, Booker was also eager to critique Biden's history as a Judiciary Committee chairman in the Senate. "Every crime bill had your name on it," he said, adding that Biden and others "used that phony tough-on-crime rhetoric that got a lot of people elected but destroyed communities like mine." 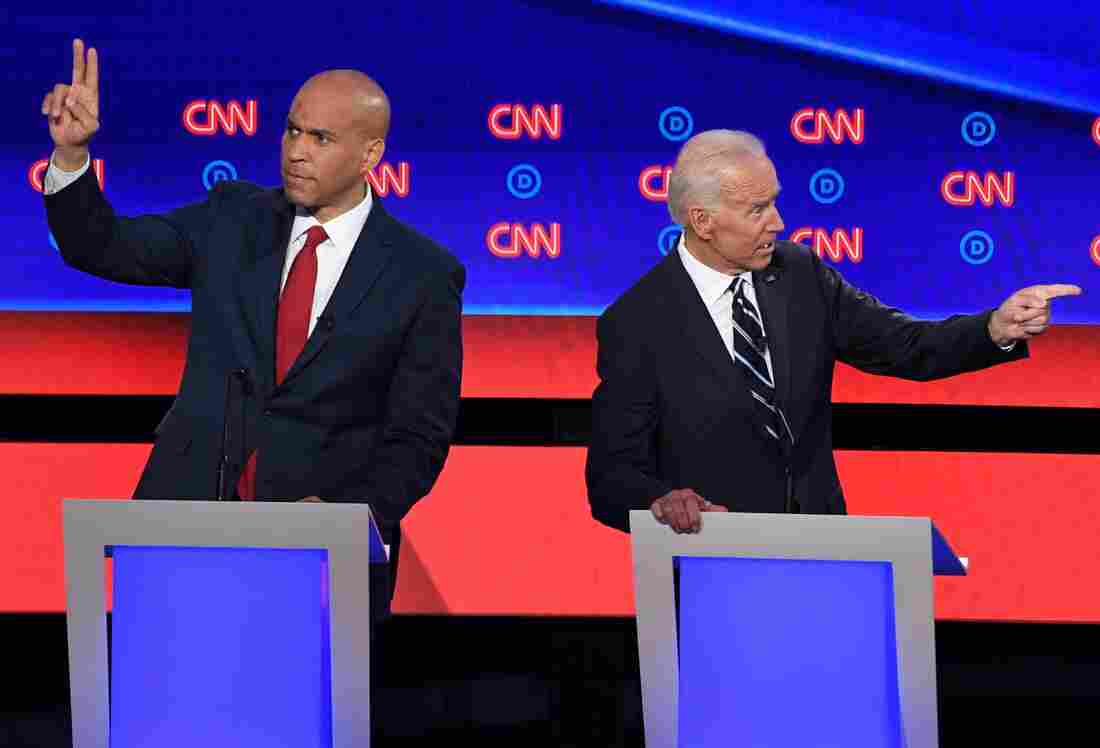 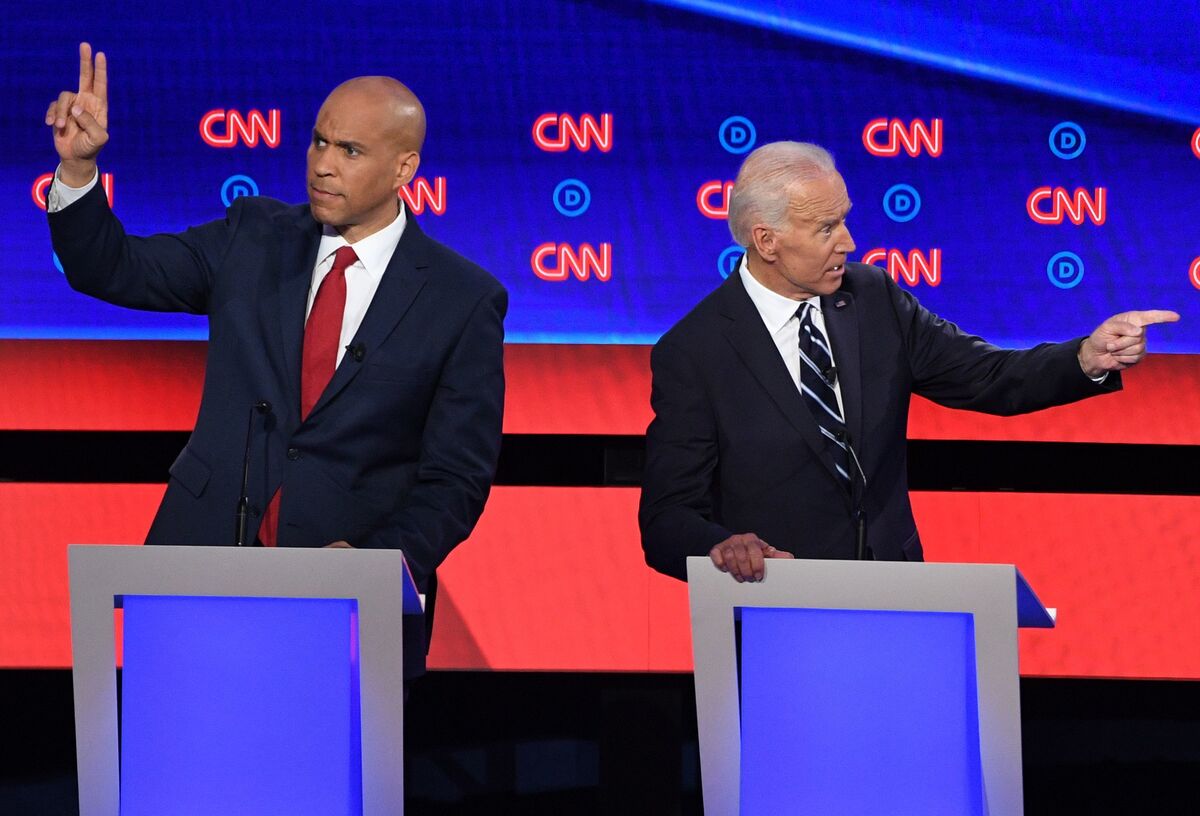 However, Biden came back with questions about decisions Booker made as mayor of Newark during a period of increased crime, including the use of stop-and-frisk police tactics. Booker was able to absorb that counterpunch and keep going, showing far more energy and engagement than he had in the June debate. His strong but sunny moments going toe-to-toe with Biden may well have made Booker the biggest beneficiary of the night.

Former Housing and Urban Development Secretary Julián Castro did not have as many chances to shine as he had in June, but he generally made them count. At one point he joined in upbraiding Biden about positions he took on immigration as vice president. "It looks like one of us has learned the lessons of history and one of us hasn't," he said, to one of the audience's larger bursts of laughter and applause.

Not to be outdone, Sen. Kirsten Gillibrand of New York weighed in with a quotation from an op-ed Biden had written decades ago citing family deterioration as an issue when women work outside the home.

Biden seemed to shrug, speaking of his own years as a single parent and the careers of his first and second wives. He then recalled how Gillibrand had praised his record in a joint appearance at Syracuse University.

"I don't know what's happened except that you're now running for president," he added, to audible approval from the audience. (The crowd had been relatively subdued on Tuesday night but was more boisterous on Wednesday. Several loud protesters were removed after interrupting the proceedings early on.)

In format and style, the second CNN debate was almost a clone of the first. Perhaps with an eye toward fair treatment of both panels, the moderators reused some of Tuesday's questions nearly verbatim. And they were just as quick to abbreviate the candidates' responses with a curt "thank you" and "please abide by the rules."

Once again, the emphasis was on finding points of contention and stoking the tension between individual contestants. Several of the questions quoted one candidate onstage and then asked a second why the first was wrong. And once again, those candidates most willing to continue punching in the clinches were awarded with extra time to do so.

Again, by far the most time was devoted to discussing health care and the candidates' competing proposals and plans for dealing with coverage and costs. At times the blizzard of numbers in the millions, billions and trillions seemed to confuse even the candidates themselves. Only about 15 minutes were allotted for foreign policy and even less time for discussing the possible impeachment of President Trump.

In one sense, the only program needed to understand Wednesday night's proceedings in the historic Fox Theatre was a summary of the Quinnipiac University poll released earlier in the week showing Biden moving up in the midsummer weeks, receiving a full one-third of all the votes in a field of two dozen.

Harris, by contrast, had lost 8 percentage points and slipped from second place to third. Her 12% trailed Sen. Elizabeth Warren's 15 percentage points and basically tied with Sen. Bernie Sanders' 11%. South Bend, Ind., Mayor Pete Buttigieg at 6% was fifth, as he had been in the earlier July 2 Quinnipiac poll.

Those who remain mired at 1% or less in national polling risk "falling off the stage" when the debating resumes mid-September. The Democratic National Committee has raised the qualifying criteria to 2% in four polls and 130,000 unique donors. By those standards, it is possible the field will winnow to a dozen or fewer candidates by next month.

But this week may have scrambled the hierarchy and breathed new life into some of the more marginal candidacies. For example, some believe self-help author Marianne Williamson helped herself enough on Tuesday night to clear the threshold. On Wednesday night, half the stage seemed locked in a survival contest. New York City Mayor Bill de Blasio used his height and voice to his advantage as he hurled challenge after challenge at Biden from the far end of the row of candidates.

In marked contrast, at the other far end, Sen. Michael Bennet of Colorado persevered in being soft-spoken and philosophical — even more than in the June debate. Generous with his rivals ("you said it better") he repeatedly returned the focus of the discussion to Trump. A common theme of the night was the need to move beyond intra-party struggles to defeat the incumbent president.

Andrew Yang, the tech entrepreneur who supports a universal basic income of $1,000 month for every adult citizen, managed to deliver a steady stream of trenchant observations that led him back to his signature talking point. He also warned that climate change had gone so far that it was time to start moving people "to higher ground."

On this issue Yang had the full support of Washington Gov. Jay Inslee, who spoke of climate change in apocalyptic terms and returned to the subject at every opportunity. Inslee said the time had passed to speak only of realistic responses to the challenge, adding "survival is realistic."

An earlier version of this story incorrectly identified Jay Inslee as the former governor of Washington. Inslee is the current governor.