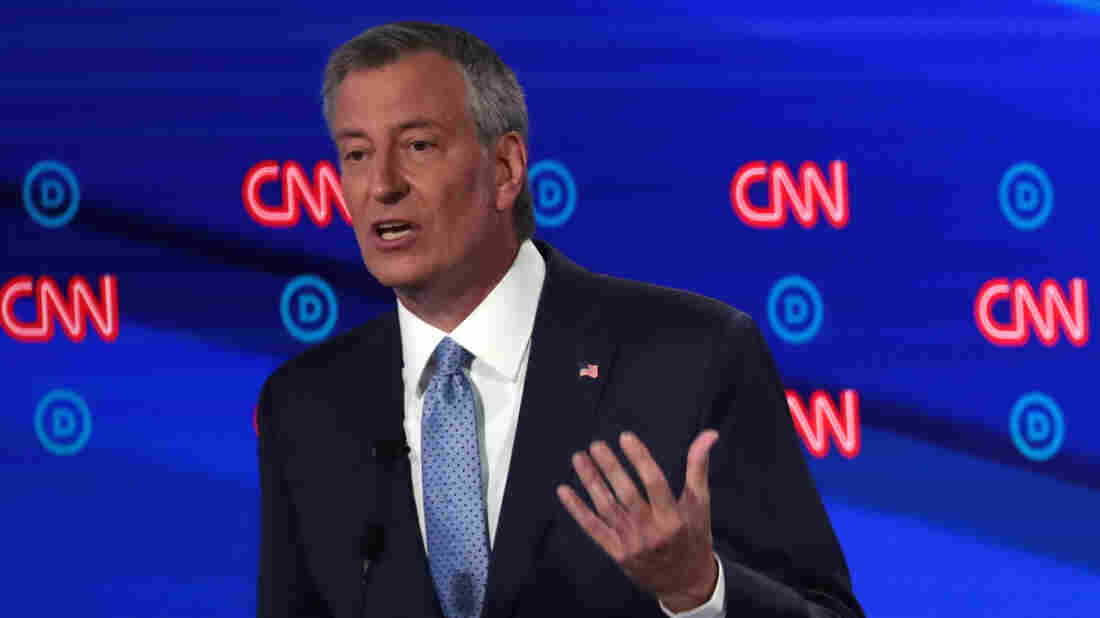 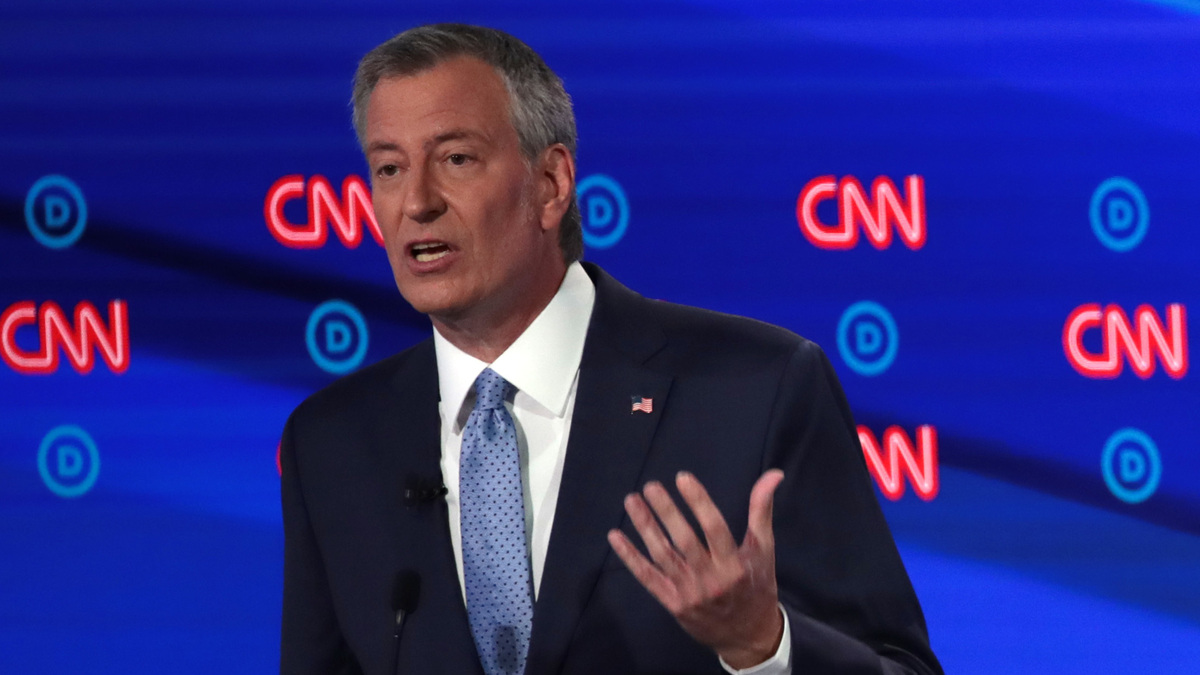 New York City Mayor Bill de Blasio speaks during the Democratic presidential debate in Detroit on Wednesday. Protesters disrupted the debate to criticize his handling of the officer involved in Eric Garner's death.

Wednesday's Democratic presidential primary debate in Detroit was interrupted twice by protesters in the audience who were trying to draw attention to immigration and policing issues.

The first happened only minutes into the debate, which was broadcast live on CNN. During New Jersey Sen. Cory Booker's opening statement, a few audience members began yelling, "Fire Pantaleo."

The chant was a reference to Staten Island, N.Y., police officer Daniel Pantaleo, who was involved in the 2014 death of Eric Garner. Garner, who was black, died after being placed in a chokehold by Pantaleo, who is white. Police had approached Garner suspecting he was illegally selling cigarettes.

Video of the incident, which captured Garner saying "I can't breathe," became another rallying point in the ongoing tensions between the African American community and law enforcement.

It appears the protest burst was actually aimed at New York City Mayor Bill de Blasio, who has been criticized for not pushing for Pantaleo's dismissal, particularly after the Justice Department declined to bring criminal charges against Pantaleo on July 16.

De Blasio does not legally have the power to fire Pantaleo, The New York Times reports. But his handling of the issue has contributed to his low approval ratings from his constituents. Other city leaders say de Blasio — who often talks about race issues through the lens of having a biracial son and who touted halting "stop and frisk" during his own opening statement — needs to speak up.

New York City public advocate Jumaane Williams told The Times that the mayor needs to "do something or don't mention Eric Garner's name ever again. ... You cannot be president, you cannot be the Democratic nominee if Daniel Pantaleo is still on the force."

The chants grew loudest not when de Blasio spoke but during Booker's time. The former Newark, N.J., mayor has pressed de Blasio on the issue, and his staff tweeted during the debate that they welcomed the interruption to draw attention to the controversy, writing, "good for you. That's how change is made."

To the folks who were standing up to Mayor de Blasio a few minutes ago—good for you. That's how change is made. #DemDebate https://t.co/zix0UzmZFa

De Blasio did later acknowledge the issue on Twitter, writing, "While I believe that respecting the process is the best way to get justice for Eric Garner's family, I recognize and identify with the pain people across this country are feeling."

While I believe that respecting the process is the best way to get justice for Eric Garner's family, I recognize and identify with the pain people across this country are feeling. #DemDebate

Former Housing and Urban Development Secretary Julián Castro weighed in from the debate stage, saying Pantaleo should be immediately removed from the NYPD.

"Officer Pantaleo used a chokehold that was prohibited by NYPD," Castro said. "He knew what he was doing, that he was killing Eric Garner, and yet he has not been brought to justice. That police officer should be off the street." 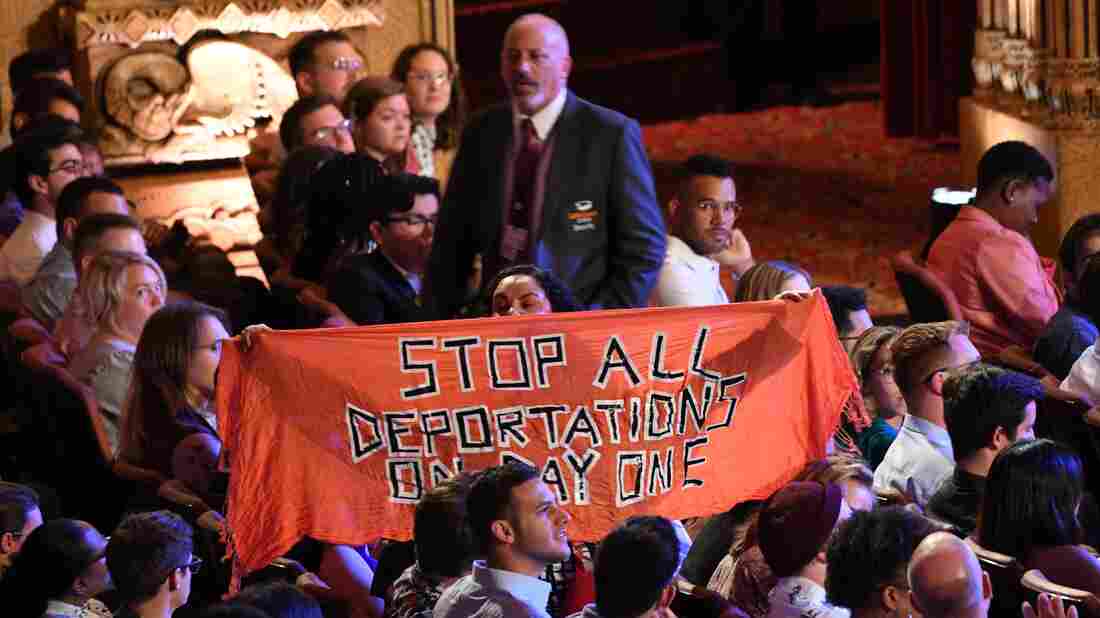 A protester unfurls a banner that says "Stop all deportations on day one" as Democratic presidential hopefuls debate. Jim Watson/AFP/Getty Images hide caption 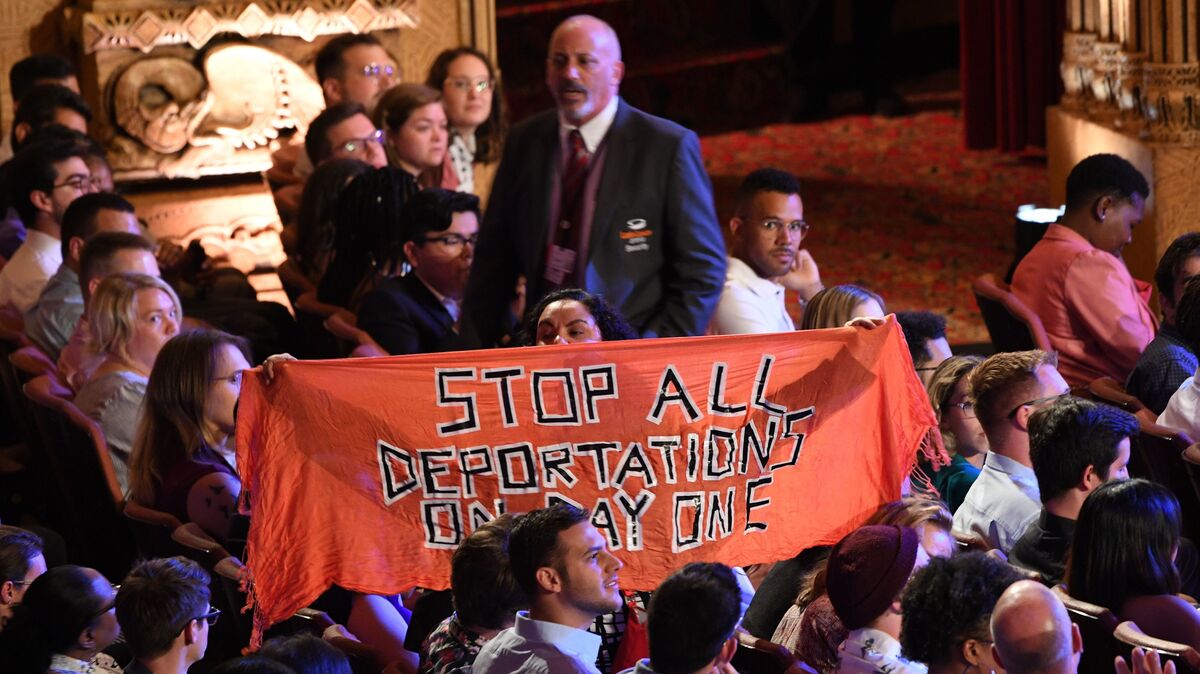 A protester unfurls a banner that says "Stop all deportations on day one" as Democratic presidential hopefuls debate.

A separate group of protesters later briefly disrupted the debate to protest former Vice President Joe Biden and the Obama administration's record on immigration. A group who identified themselves as the Cosecha Movement began chanting "3 million deportations" and unfurled a banner that read "Stop all deportations on day one."

A second protest disruption at #DemDebate, calling out Biden for the Obama administration's "3 million deportations!" pic.twitter.com/qn2IWIzsHH

The group says it wants a halt to all immigrant detention and deportations on the first day of a new Democratic president's term in office. It's also pushing for reunification of families separated by deportation under the Trump administration and the immediate legalization of all estimated 11 million people who live in the country illegally.

Earlier in the day, the Cosecha Movement had held a protest outside the Detroit theater and blocked traffic at the Detroit-Windsor Tunnel, which is an international border crossing between the U.S. and Canada.

Video of the second Cosecha Michigan activist chanting “3 million deportations”. @JoeBiden, this country cannot go back to silent mass deportations and family separations. We need a candidate who will stop all deportations on day 1. pic.twitter.com/O8C1a1XuJs