Accessibility links
John Dillinger's Relatives Plan To Exhume The Gangster's Body "I have been presented with evidence that demonstrates that the individual who was shot and killed ... may not in fact have been my uncle," his nephew, Mike Thompson, said in an affidavit. 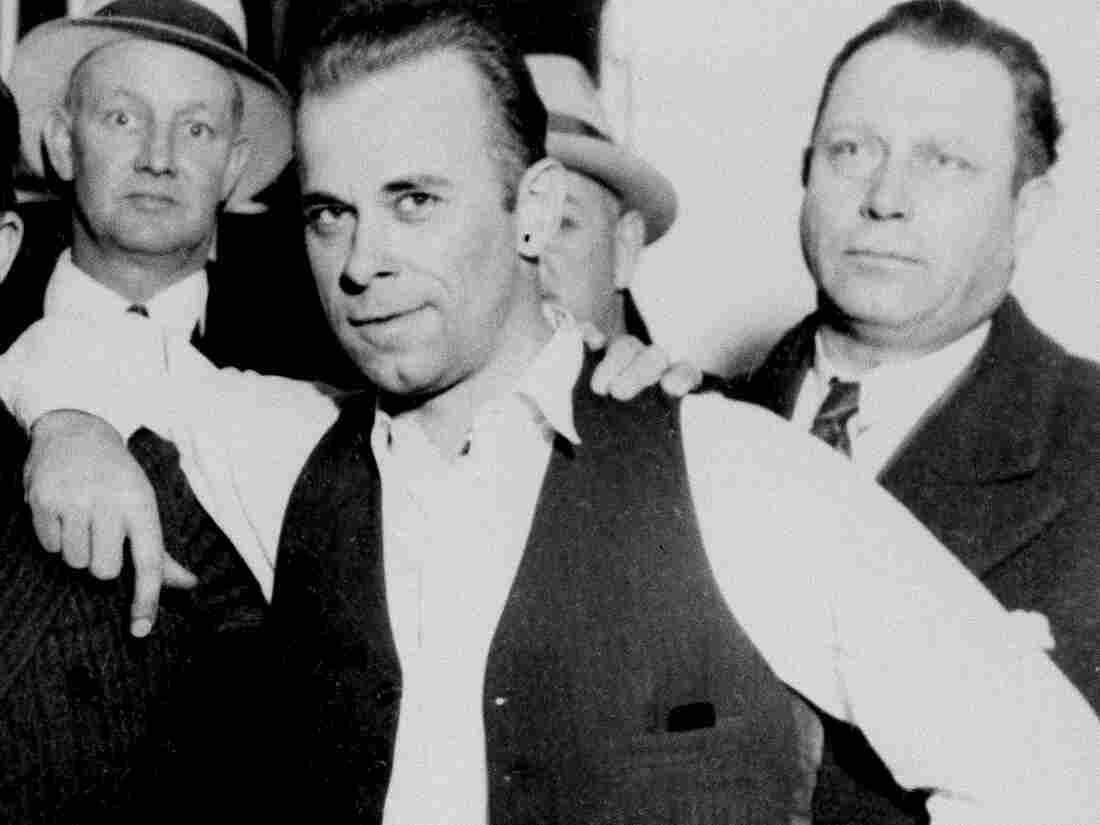 John Dillinger (center) strikes a jaunty pose after his capture in Crown Point, Ind., in February 1934. His niece and nephew hope to exhume the gangster's body to conduct forensic tests. AP hide caption 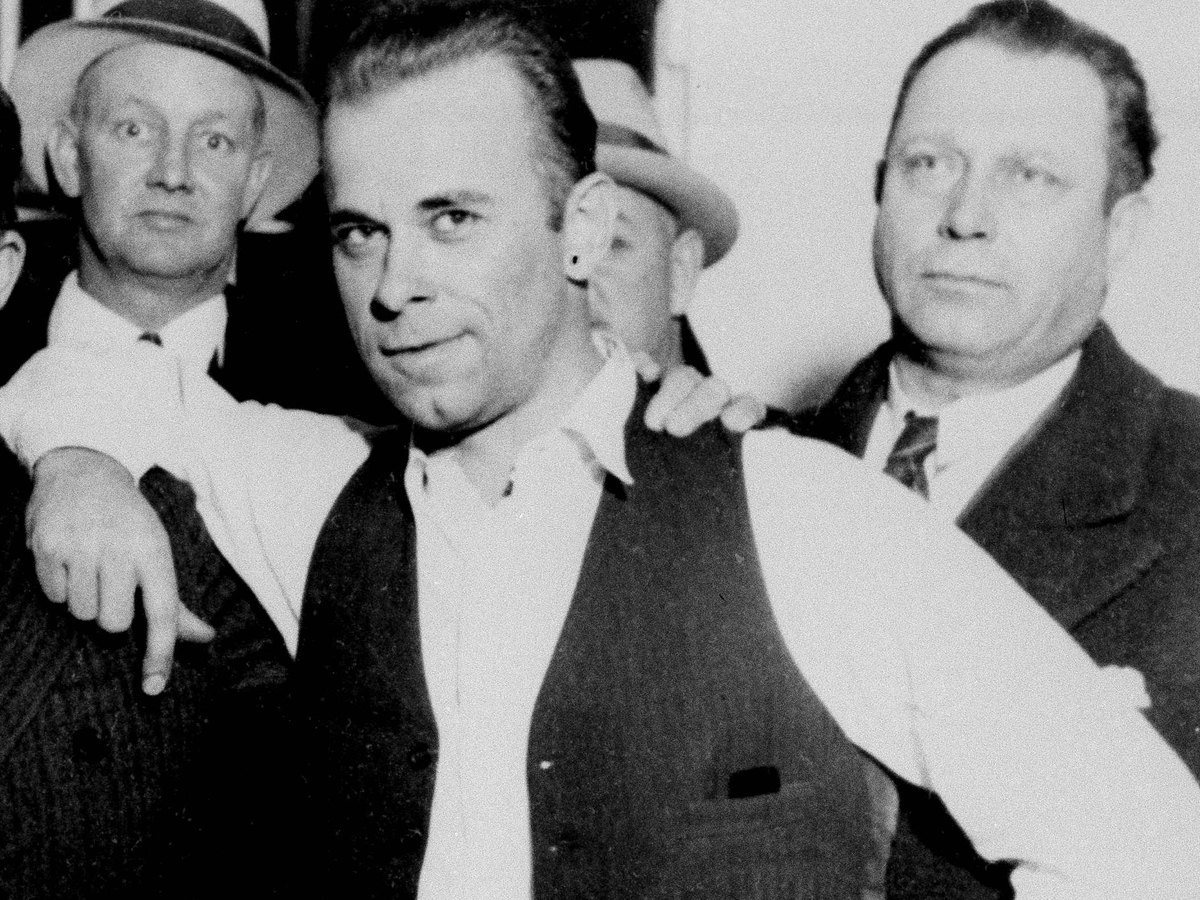 John Dillinger (center) strikes a jaunty pose after his capture in Crown Point, Ind., in February 1934. His niece and nephew hope to exhume the gangster's body to conduct forensic tests.

Why, people wondered, after Dillinger's immediate family went to such great lengths to ensure the outlaw's body would never be disturbed — burying him under 3 feet of concrete — would his living relatives demand he be taken out of the ground?

The answer: They suspect it's not him in the grave.

"I have been presented with evidence that demonstrates that the individual who was shot and killed at the Biograph Theater in Chicago on July 22, 1934 may not in fact have been my uncle, John H. Dillinger," separate affidavits signed by Mike Thompson and his sister, Carol Thompson, state.

The documents claim details about the buried body don't add up, including "the non-match of his eye color, the ear shape and protrusion from the head, the fingerprints not matching, the existence of a heart condition, and the apparent non-match of the anterior teeth."

Dillinger, who had spent nearly a decade in state prison before embarking on a life of crime that made him infamous, endured tremendous physical pain to alter his identity. The same year he was gunned down by the FBI after watching Clark Gable's crime film Manhattan Melodrama at a Chicago movie theater, Dillinger underwent plastic surgery and attempted to remove his fingerprints by burning them with acid.

Dillinger was the mastermind behind several bank robberies in the Midwest, stealing more than $300,000. His daring bank heists and thrilling prison breaks inspired both fear and admiration. Despite killings and other violence of his gang, he was regarded by many as a folk hero; people living in severe poverty through the Great Depression cheered as Dillinger stole from banks and not the poor.

Both his niece and nephew argue that the only way to be certain about the true identity of the body at Crown Hill Cemetery is to have it exhumed and submitted for forensic analysis, which may involve "possibly removing a bone or bones for DNA testing."

Last month, the Indiana State Department of Health issued a permit allowing disinterment and reburial of the body by Sept. 16.

It is unclear whether Dillinger's family will need approval from the Indiana Cemetery Board or Marion County, where the body is located, to move forward with the exhumation, Megan Wade-Taxter, a spokeswoman for the Department of Health told NPR.

The FBI denies any suggestion that agents shot and killed the wrong man, saying in a statement that Dillinger was taken down "as he reached for the .380 Colt in his trouser pocket."

"Dillinger — who was wanted for multiple violent crimes — was pronounced dead at the Alexian Brothers Hospital, bringing about an end to the Gangster Era," the statement says.

The bureau's website contains a full page devoted to The Top 10 Dillinger Myths. Among them is the theory that a stand-in was killed at the Biograph Theater.

"If this sounds like a conspiracy theory, that's because it is. Claims that a man resembling Dillinger was actually killed have been advanced with only circumstantial evidence. On the other hand, a wealth of information supports Dillinger's demise. Special Agents M. Chaffetz and Earle Richmond, for example, took two sets of fingerprints from the body outside the Biograph Theater, and both were a positive match. Another set taken during the autopsy were also a match."

Dan Silberman, a spokesman for the History Channel, confirmed the entire endeavor will be included in a documentary about the legendary gangster, the Chicago Sun-Times reported.

Dillinger's niece and nephew say in the affidavits that they believe "it is critical to learn whether Dillinger lived beyond his reported date of death." And if it turns out he was not killed in the shootout, they say they are "interested in discovering what happened to him, where he lived, whether he had children, and whether any such children or grandchildren are living today."