Accessibility links
Charles And Ray Eames Made Life Better By Design — Their Home Was No Exception Built in 1949 in the Pacific Palisades, the Eames House is considered among the most important postwar residences in the U.S. Now, the family is working to preserve the home for generations to come. 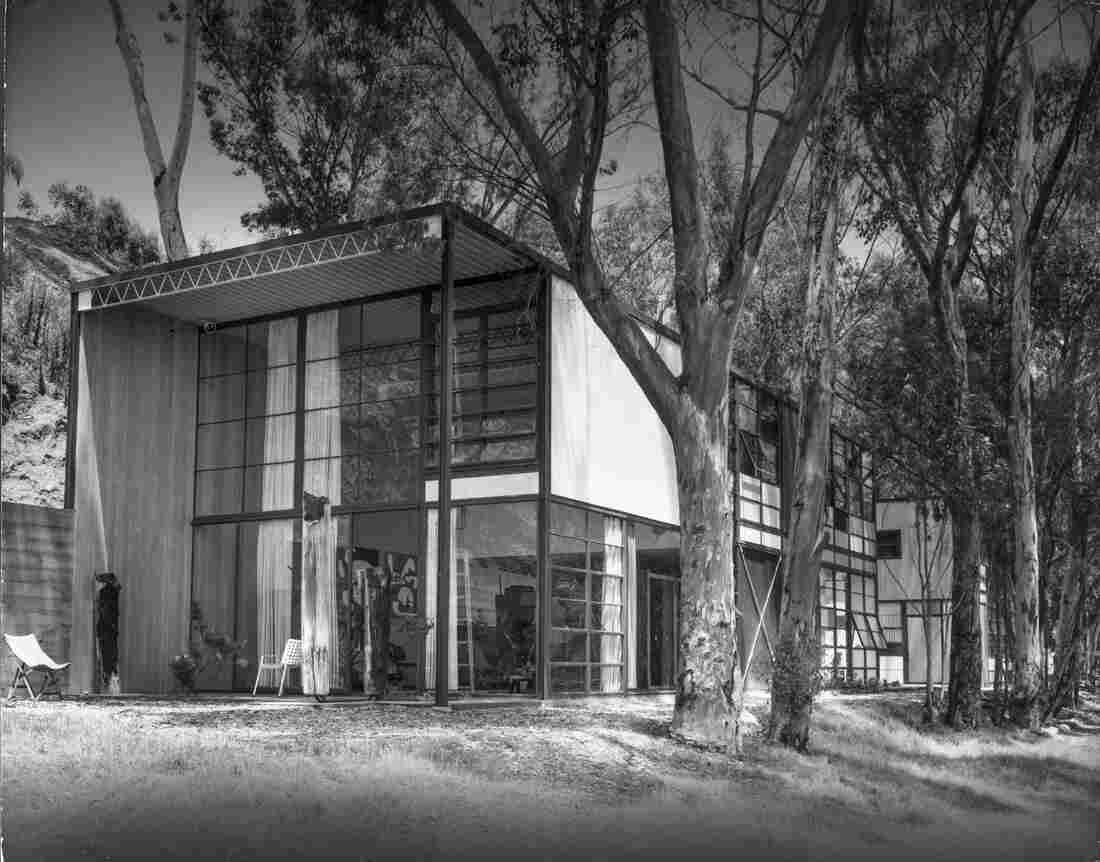 The Eames House, built in 1949 in the Pacific Palisades, is considered one of the most important postwar residences in the U.S. The National Historic Landmark celebrates its 70th anniversary this year with a new conservation plan. Julius Shulman/J. Paul Getty Trust hide caption 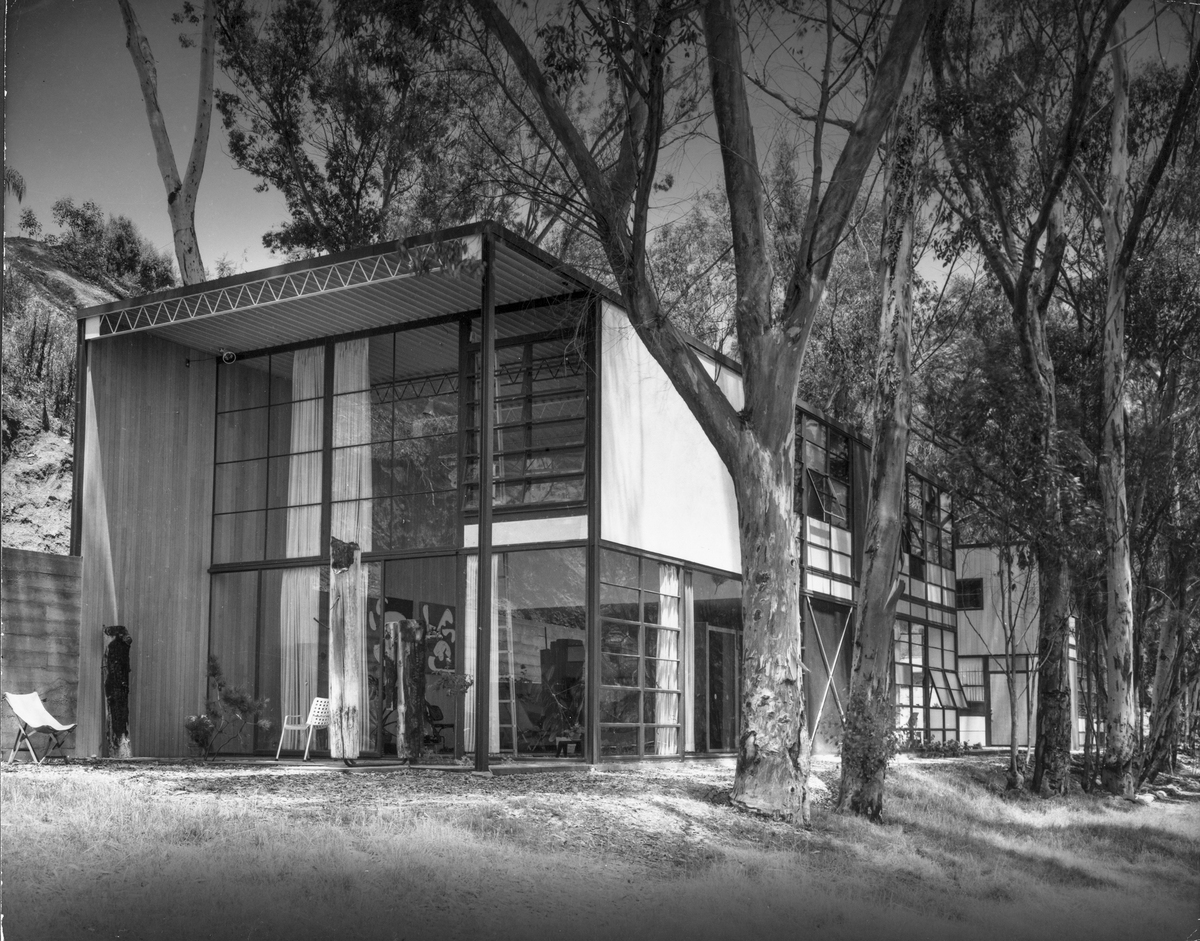 The Eames House, built in 1949 in the Pacific Palisades, is considered one of the most important postwar residences in the U.S. The National Historic Landmark celebrates its 70th anniversary this year with a new conservation plan.

In 1949, Charles and Ray Eames designed and built their home on a bluff overlooking the ocean in the Pacific Palisades. Features of their house and studio are now ubiquitous, but 70 years ago, they were revolutionary.

Charles was an architect; his wife, Ray, a painter. From their Los Angeles studio, they designed molded plywood office and lounge chairs that are now considered classics. The couple devised toys and made innovative films about math and computers for clients such as IBM and Boeing.

Their home has long been a mecca for artists, students and design enthusiasts. Now, their heirs are working to preserve the house for generations to come. 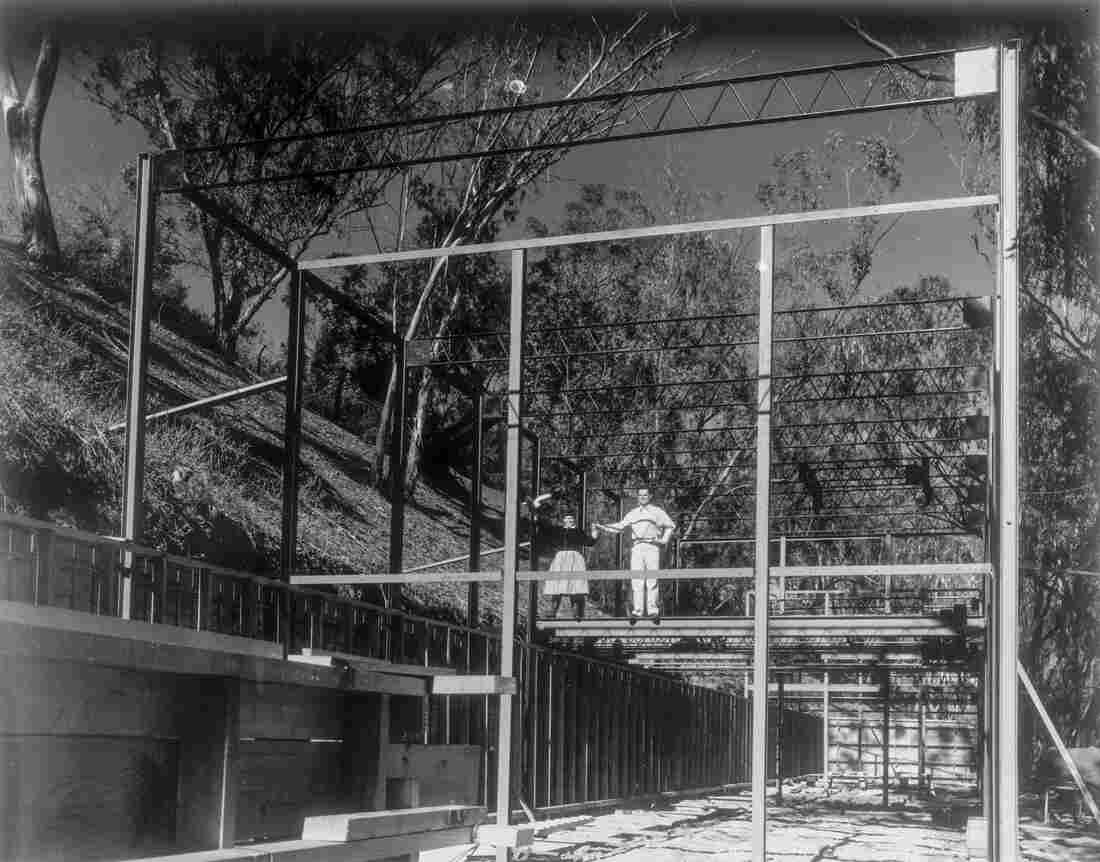 Ray and Charles Eames stand on the steel frame of their home-in-progress in 1949. Eames Office hide caption 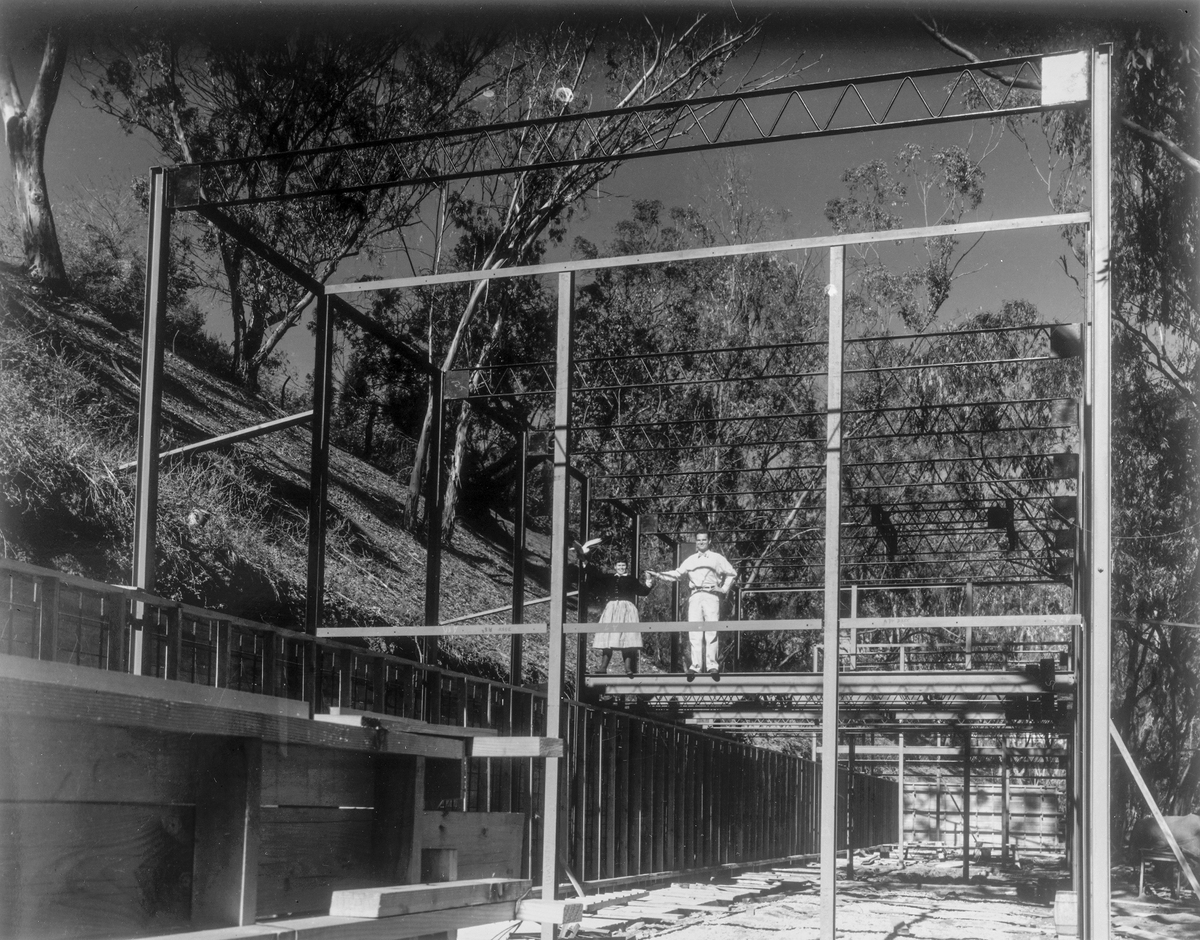 Ray and Charles Eames stand on the steel frame of their home-in-progress in 1949.

The house was built with off-the-shelf, prefabricated materials. Steel beams, painted black, frame panels of glass walls and doors. It seems composed like a Mondrian painting: a block of cobalt blue here, a bright red-orange insert there.

"Ray and I worked on it, we designed it together, of course," Charles Eames explained to TV host Arlene Francis in 1956, on her show Home. "It's composed of standards factory units."

It was known as "Case Study House No. 8" for a program that challenged architects to design modern, inexpensive residences in postwar Southern California. It's now a National Historic Landmark, and the Getty Conservation Institute has been helping plan for its future. Having preserved tombs in Egypt and architectural ruins in China and Latin America, the institute has turned to conserving modern architecture. Susan Macdonald, the GCI's head of buildings and sites, says the project proves the institute can treat modern buildings the same way it treats buildings from the ancient world.

So far, for the Eames house, that has meant repairing the flat roof, replacing the asbestos floor tiles and installing a device to measure air particulates. The house remains open to reservations-only visitors, who must enter without shoes.

Take A Tour Of The Eames House

Tours often begin in the kitchen, where everything was ordered from a catalog and was affordable. The Eameses added their flair, painting an exposed pipe red, installing sliding glass doors and creating artful assemblages.

"You'll see very common things like shells and little tiny objects," points out docent Jennifer Polito. "Together they're beautiful. The candlesticks were important — they had breakfast by candlelight."

A spiral staircase leads upstairs to two bedrooms with movable walls. The 17-foot-tall living room is light and airy. Glass doors open to a meadow, connecting indoors and outdoors. The space is accented by exposed trusses, as well as layered rugs and cozy low-slung couches. And everywhere: fabrics, toys, folk art, books and souvenirs from their travels.

This is not your sterile, minimalist, unhappy hipsters' home.

"This is not your sterile, minimalist, unhappy hipsters' home," says Los Angeles Times staff writer Carolina Miranda, who covers art and architecture. "This is a home that is lived in by two people who've been all over the world and are sharing some of what they've harvested in those adventures in their home."

Miranda admires the 1,500-square-foot house, nestled into the hillside. It stands in stark contrast to other houses in the neighborhood.

"It's so thoughtful and considered in terms of its design and its placement on the land," she says. "And then we walk up the hill and we're looking at McMansion construction, essentially. Totally unsympathetic. All they want are big bathrooms and a giant rumpus room. And the ocean view." 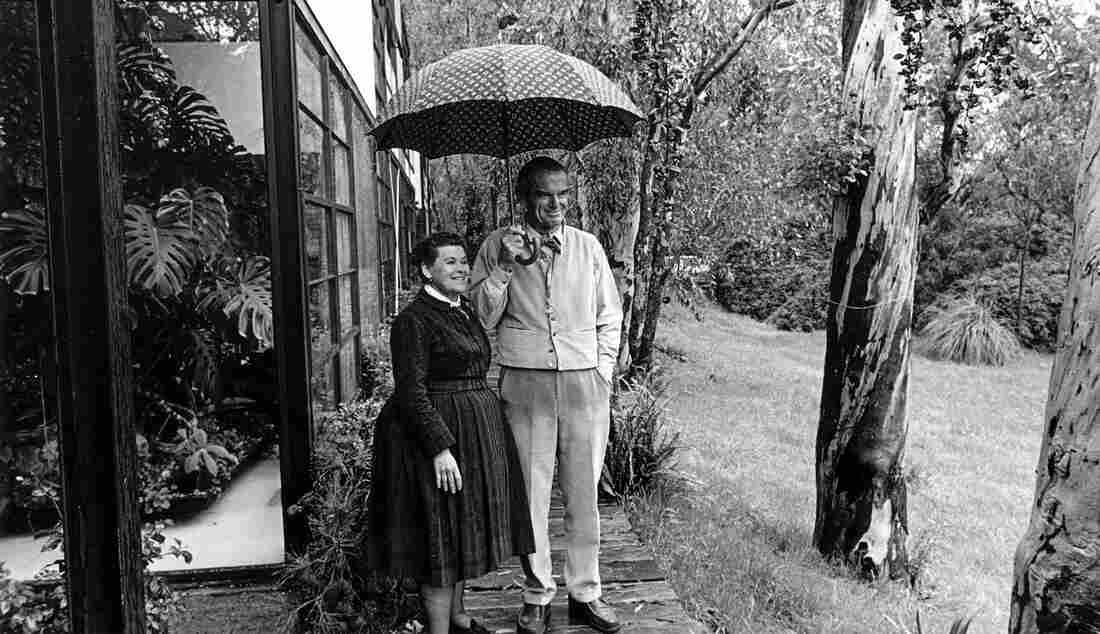 Ray and Charles stand outside their home in March 1978. It was known as "Case Study House No. 8" for a program that challenged architects to design modern, inexpensive residences in postwar Southern California. Hap Johnson/Eames Office hide caption

You can glimpse the Pacific from inside the Eames House, too. But unlike its supersize neighbors, it sits far back from the cliff's edge, in a meadow dotted with eucalyptus trees. Ray Eames once told a TV interviewer that they decided to orient the house this way after having lived in the meadow waiting for the house to be built. "We spent all our spare time here," she said. "[I] began to think it would be criminal to put the house in the middle of the field."

The Eameses' granddaughter, Lucia Dewey Atwood, remembers picnicking in that meadow with her grandparents — she visited them often. They lived in harmony with nature, she says. From here, you hear the sounds of birds, tree leaves rustling and, on quiet nights, the ocean waves crashing in the distance.

Atwood says her grandparents were always creative, wondrous hosts. "One time I arrived, and Charles handed me a camera, and we spent the entire morning out in the meadow shooting images of daffodils," she remembers. It turned out he was working on a project for the then-upcoming Polaroid camera, the SX-70.

Decades later, Atwood worked with her grandmother in the studio and lived in the house. She is now on the board of the Eames Foundation, whose goal, she says, is to show the way in which Charles and Ray lived.

"That does mean opening doors and windows; it means pulling curtains. It means having fresh bouquets in the house and having even a living tree in the house," she explains. Atwood admits this poses conservation challenges, but her family doesn't want the house to be a hermetically sealed museum.

She says the 250-year conservation plan she is directing takes into account the life span of the eucalyptus trees. And it incorporates her grandparents' modernist values: a respect for materials, the iterative process of editing, and the ability to see "failure" as an opportunity to learn and to experiment. Also, taking pleasure seriously. 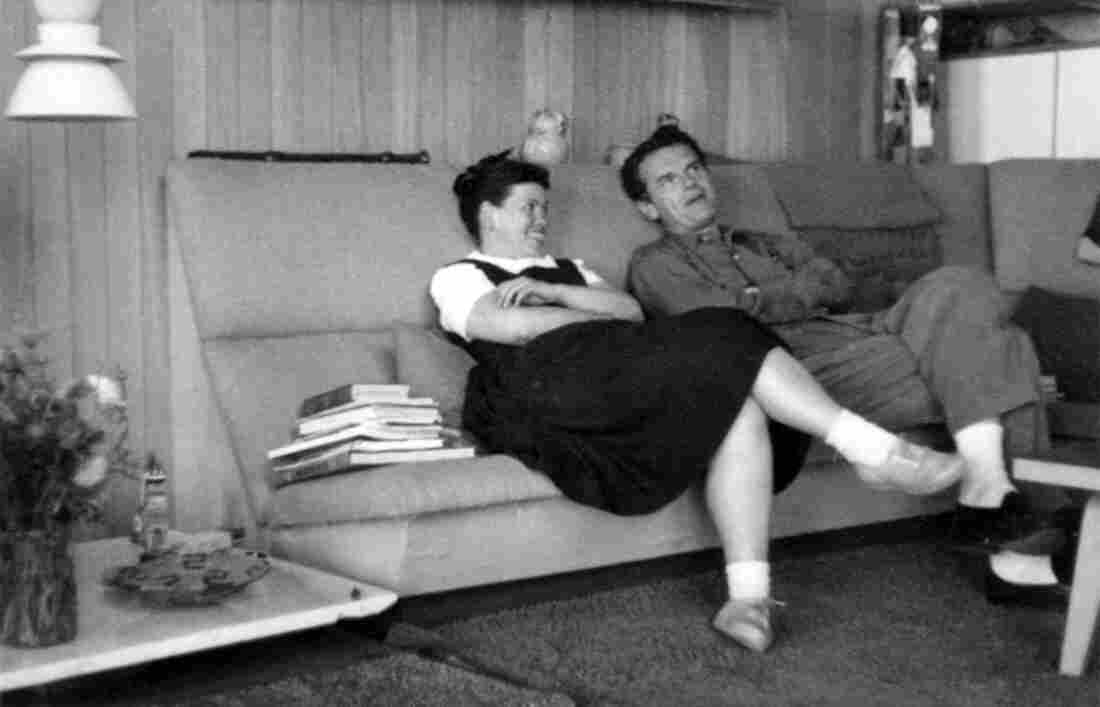 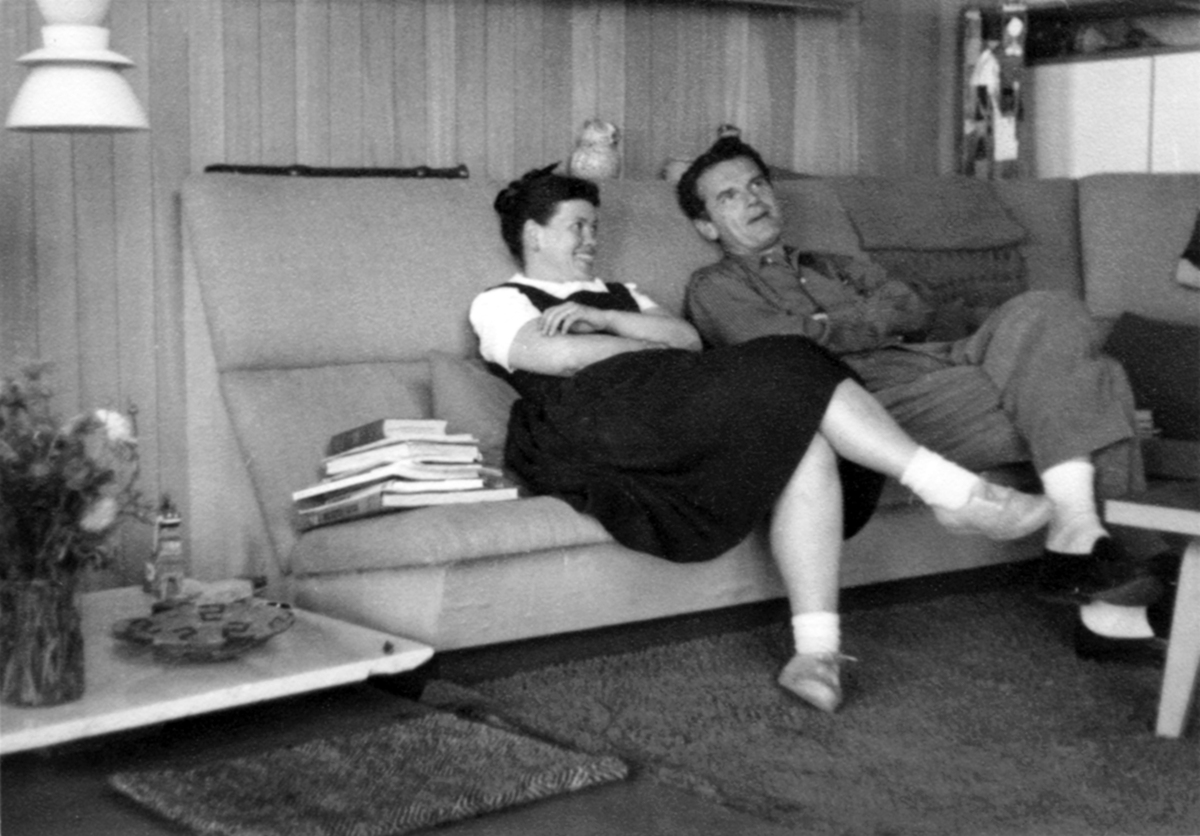 Ray and Charles relax on a built-in sofa in their living room alcove in 1951.

"It's so amazing — if you're working on an important project, you sort of make it be fun," she says. "The ideas are just so much more fantastic. I mean, Charles and Ray really had this wonderful ability to invite you into the fun."

And that was the point, according to the Eameses: to make life better by design.

This story was edited by Nina Gregory.

Curvy, Loungy And Fun: The Work Of Charles Eames

A previous Web version of this story incorrectly stated that Getty Conservation Institute preserved the Great Sphinx of Giza. GCI conducted an environmental monitoring study at that site.