Accessibility links
With These Comics, Learn How to Laugh Like It's 1999 (Hint: Don't) As part of our summerlong tribute to funny books, we take a look back at the ennui-drenched anti-humor of some of the 1990s, when absurdity and surrealism were the rule — laughs not so much. 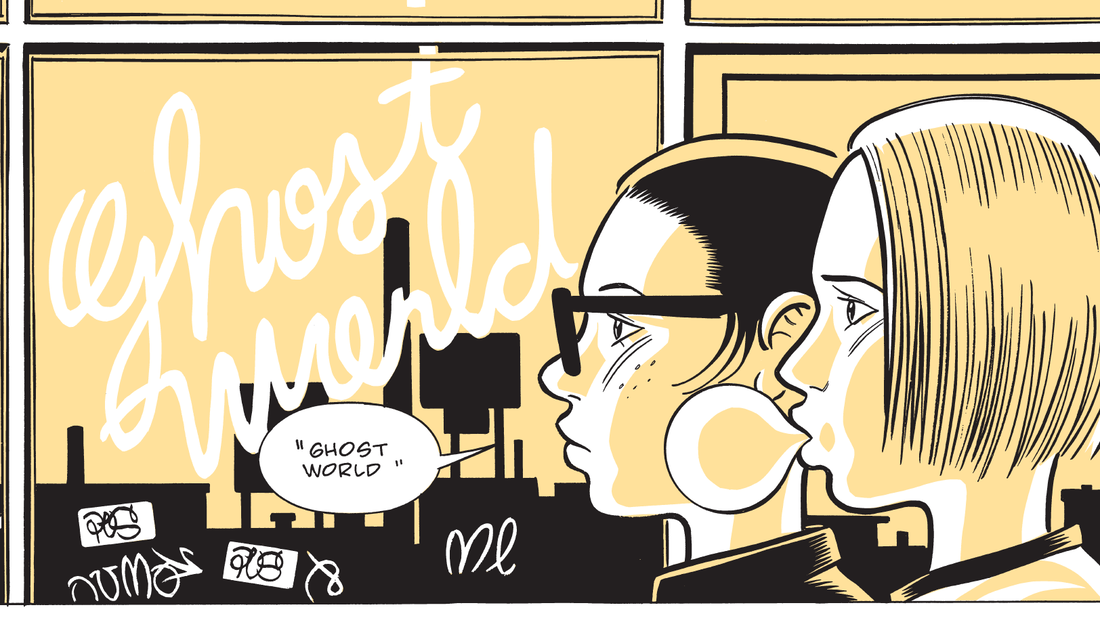 Ghost World's Enid and Rebecca have no time for earnestness or sincerity — or laughs. Fantagraphics hide caption 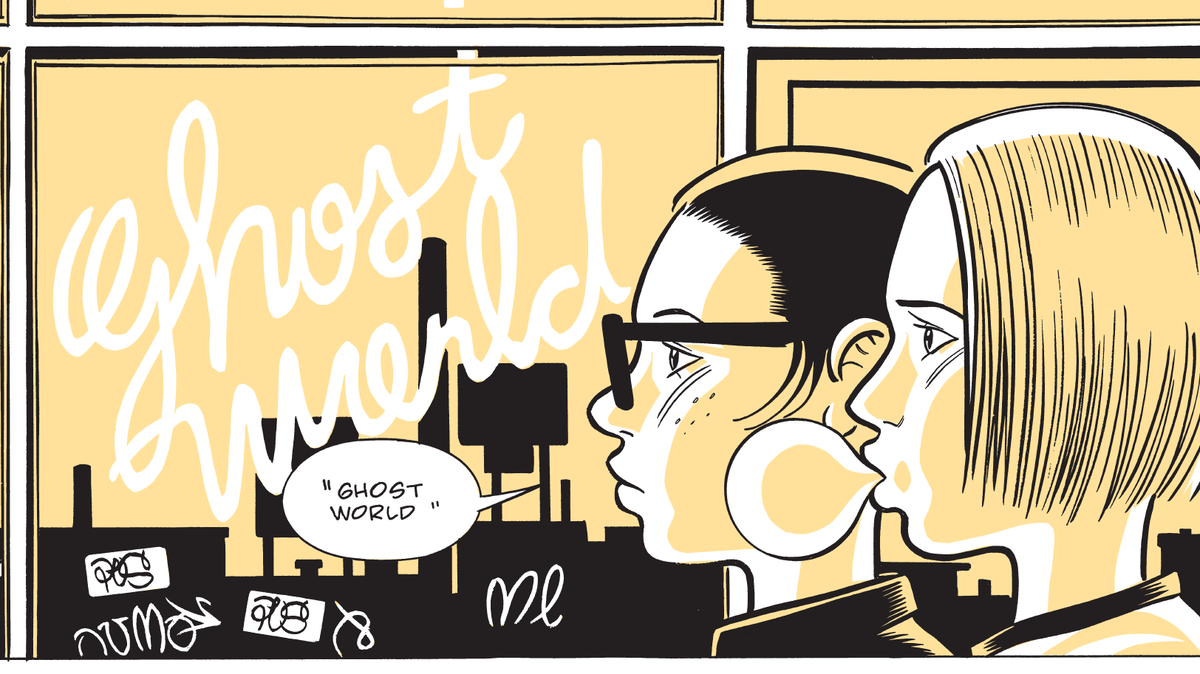 Ghost World's Enid and Rebecca have no time for earnestness or sincerity — or laughs.

As NPR spends the summer reflecting on literary laughter, a funny thing is happening in popular culture. An era infamous for its uniquely counterintuitive approach to humor is coming back in style. If Seventeen magazine says so, it must be true: The '90s are with us again. Where fashion goes, comedy follows, so dig out your flatforms, paste on an anti-establishment sneer and try to remember what made you laugh two decades ago. If you hate to think back that far, no worries: Just follow these do's and don'ts to recapture the sensibility of the decade's comics and zines. 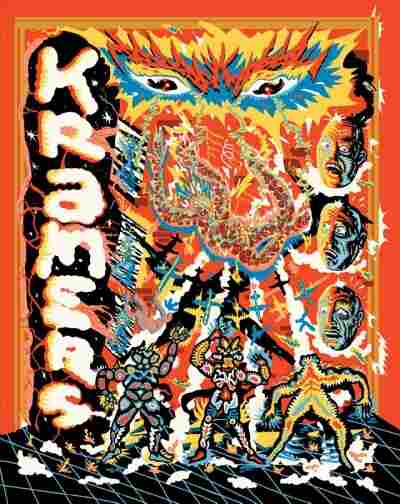 Perhaps the definitive characteristic of '90s alternative comics is that they don't necessarily make you laugh. "It's misanthropic, it's self-taught, it's angry and it's lurid," sums up Sammy Harkham, who for two decades has been curating the genre-defining anthology Kramers Ergot (the 10th issue came out July 2). In the '90s, absurdism and surreality were the order of the day. If you didn't get the point ... well, let's just say you would probably be more comfortable sticking to Doonesbury and Shoe. But if you sought out a book like Michael Kupperman's Snake 'N' Bacon's Cartoon Cabaret, each page challenged you to expand your definition of humor. The stars are a snake and a piece of bacon; the snake can only hiss, and when the bacon talks, it says things like, "I'm real bacon."

In short, '90s comics required the reader to share the author's very specific sensibility in order to get the joke. Ever suspicious of arrivistes and try-harders, '90s creators cultivated an in-crowd vibe. If you didn't respond to a given setup, you knew someone else probably did — and that person was probably much cooler than you. They might even be personally acquainted with the artist himself. Peter Bagge remembers how he crammed the pages of Hate with jokes aimed at his friends: "When I look back, I'm like, 'What was I thinking? I can probably count on my hands the number of people who would get the reference,' " he says. That didn't keep Hate from being a top-selling title at the time. Around 30,000 people bought each issue at the series' peak, doubtless hoping they would catch on eventually. 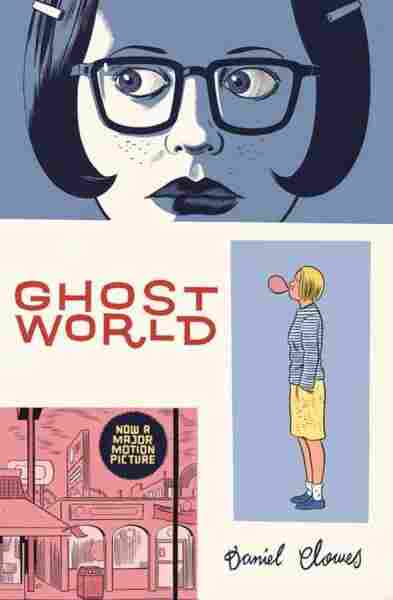 To tone up your funny-not-funnybone, get acquainted with Flaming Carrot, whose adventures are being reissued in a 400-plus-page omnibus on Oct. 1. Though Bob Burden's comic had its heyday in the '80s, it typified absurdist nonhumor and served as the basis for the 1999 movie Mystery Men, starring indie icons Ben Stiller, Janeane Garofalo and Tom Waits.

Do: Say what you don't mean

One word: irony. That humble rhetorical device was the main way '90s humor avoided being funny. From 1991 through 2001, the surest way to tell someone was joking was if they said something with a perfectly straight face. Actual sincerity was considered self-evidently risible, and alternative comics' most memorable and agonizing moments were when they showed someone expressing a heartfelt sentiment. In Dan Clowes' Ghost World, jaded 18-year-olds Enid and Rebecca (and the reader) constantly rolled their eyes at former schoolmate Melorra, whose crime was simply trying too hard. "I've been working for Greenpeace five days a week," she tells them one day. Melorra doesn't see the existential emptiness her sincerity masks, and her cluelessness is what's (painfully) funny. "I remember [Clowes' comic] Eightball coming out at that time and feeling like the ground underneath comics had changed with every issue," recalls John Porcellino, who still writes the iconic series King-Cat Comics (Vol. 77 was published in 2017). For irony at its driest, look for Original Art: Daniel Clowes, coming Oct. 8. 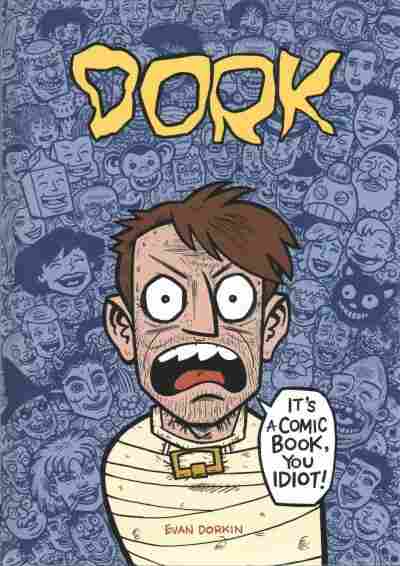 by Evan Dorkin and Sarah Dyer

Then there were jokes that were so dumb that they became ironically hilarious – like in Evan Dorkin's Dork. He drew the unforgettable comedy team of Milk and Cheese: Dairy Products Gone Bad — a milk carton and Swiss wedge who yelled and swore all the time — as well as characters like Myron the Living Voodoo Doll and Phil the Disco Skinhead. Dorkin's jokes were hardly what you would call sophisticated, but that added to the fun: Laughing at them made you aware of your own childishness, giving them that crucial ironic frisson. Dork's pages zipped by at a caffeinated pace, often rehashing well-worn (and thus beloved) premises. In one, Myron gets his head ripped off and, somewhere else, a man is bloodily decapitated. "M-must f-find that doll," the head croaks as it flies out of the panel.

If you want to master the art of so-bad-it's-good humor, start with last year's reissues of Dorkin's work: There's a Dork compendium and a Milk and Cheese collection. The latter's back cover explains, "They're not antisocial, they're anti-everything!"

Don't: Be mainstream — whatever that means

In the '90s, "the establishment" was a thing — insomuch as everyone wanted to be against it. In the wake of '80s conformity, nothing was easier or more satisfying than puncturing myths and challenging mores. Anything that smacked of tradition was a magnet for abuse, and some of the most successful comics were sendups of other comics, like the long-running Dysfunctional Family Circus.

If you found yourself fighting the establishment's darkest heart, though, you were probably a female cartoonist. It's sad but true that the world of '90s comics was boyish in the extreme. Despite the skills of such rising creators as Julie Doucet, Lynda Barry, Debbie Drechsler, Jessica Abel and Dame Darcy, the most recognizable names in the movement were men like Bagge, Clowes and Chris Ware. 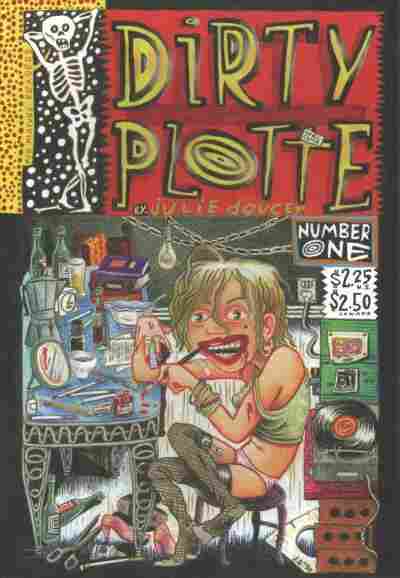 But it was women's sensibility that was truly seditious, says Anne Elizabeth Moore, whose book Sweet Little C***: The Graphic Work of Julie Doucet just won an Eisner Award. Moore points to Doucet's one-page comic "Interlude," about a nameless guy, "the guy whose name never comes up in the strip, but he pulls his dong out of his pants and he introduces it as Pete. And he starts getting really aggressive with anyone who walks by. This is on a public street in Montreal, presumably, that anyone might insult it. And that's hilarious," she says.

"That's even comedy that we can't culturally — mainstream culturally — even begin to comprehend until this moment," Moore continues, "where we've been through #MeToo and we've started to talk about manspreading and mansplaining and all of these things. But like at the time it was like, 'Oh my God, someone finally gets how hilarious men are when they feel wronged.' "

For a straight shot of anti-establishment sensibility, read last year's massive box set of Doucet's comic Dirty Plotte. Or for a more subdued iconoclasm, try Jenny Zervakis' The Complete Strange Growths, 1991-1997, published by Porcellino's company Spit and a Half in 2017.

Or don't: Perhaps the best way to recapture the rebellious, contradictory '90s is to disdain — or better yet, loudly mock — the advice of a guide like this one. If the decade's revival continues, no one will roll their eyes more than the creators mentioned above. So do buy their comics, but maybe read them alone in your bedroom. A true Gen Xer is nothing if not alienated.