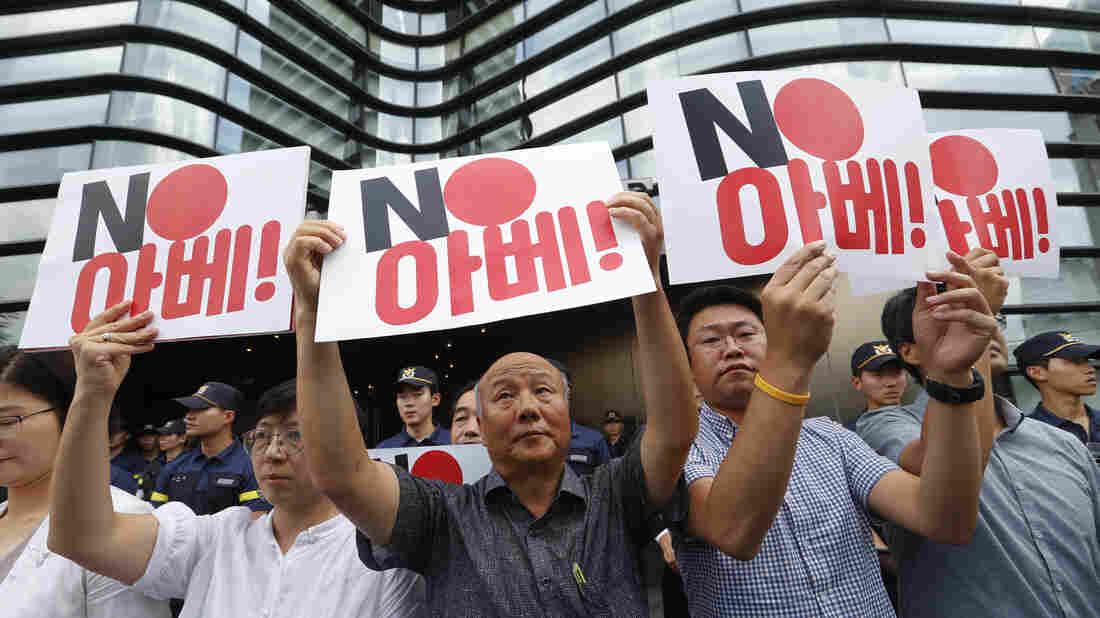 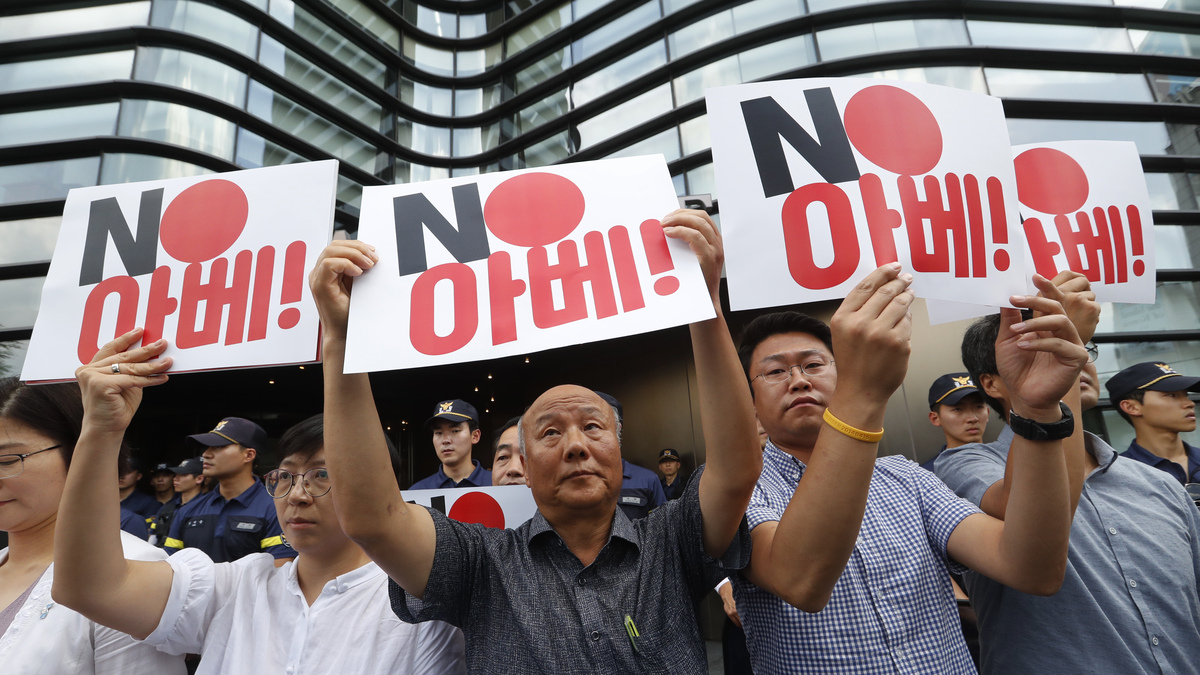 South Korean protesters gathered in front of the Japanese Embassy in Seoul on Friday, holding placards that denounce the Japanese government's decision regarding exports to South Korea.

Japan downgraded its trading relationship with South Korea on Friday, escalating a simmering trade feud that some experts worry could undermine U.S. security ties with chief Asian allies and hinder their cooperation on the North Korean nuclear issue.

Despite last-minute diplomacy and entreaties from U.S. officials, Japan passed a bill imposing export controls on industrial and high-tech products going to South Korea. While their export is still allowed, Tokyo scratched Seoul from a list of 27 trading partners for which approvals are fast-tracked. The measure will take effect Aug. 28.

The dispute is rooted in history and Japan's 1910-1945 colonial occupation of Korea. With the spread to trade, ties between Seoul and Tokyo could quickly begin a downward spiral with far-reaching consequences.

The economic measures are a step toward the decoupling of Asia's second- and fourth-largest economies, says Scott Snyder, senior fellow for Korea studies at the Council on Foreign Relations.

"The logical end of the emotion driving the policies in Japan and South Korea," Snyder says, "is essentially one that states: 'Well, we really don't need the other.' "

If escalation is unchecked, he warns, the feud could undermine the U.S.-constructed security architecture that has been in place in Asia for decades.

In Seoul, President Moon Jae-in warned that Japan would face serious consequences for what he called a reckless action.

"Japan's measure will add even more difficulties to our economy under these severe circumstances," he told a special meeting of his Cabinet.

"However, we will never again lose to Japan," he declared. "We have come this far today by overcoming countless hardships."

Seoul will assemble a task force to plan countermeasures. South Korea's finance minister said Seoul will drop Tokyo from its own list of trusted trade partners.

Following news of Japan's move, protesters gathered Friday outside the Japanese Embassy in Seoul. National carrier Korean Air announced Thursday that it will use smaller jets on flights to Japan, as travelers canceled trips. Korean retailers have organized boycotts of Japanese products.

And police said a 72-year-old man was in critical condition after setting himself on fire in downtown Seoul, apparently in protest against Japan's actions.

Seoul suggested Thursday that it could consider pulling out of a military intelligence sharing agreement, which the two countries use to coordinate their response to threats from North Korea.

Tokyo says Friday's decision was about national security. Last month, it imposed export controls on high-tech materials used in smartphones and semiconductors but which also have military uses.

Tokyo is also angry over a South Korean Supreme Court decision compelling Japanese companies to compensate Koreans who were forced to work for Japan during World War II. Normalization agreements between Seoul and Tokyo in 1965 ended government-to-government reparations, but South Korea argues that individuals can still pursue them.

"Korean foreign policy is changing," argues Kunihiko Miyake, research director at The Canon Institute for Global Studies in Tokyo. He says Japan has watched with dismay as Moon has rebalanced South Korea's foreign policy away from the U.S. and Japan, and closer to North Korea and China.

He says Japan's move is less focused on bilateral ties and more "concerned about the South Korean departure from the tripartite alliance" of Seoul, Tokyo and Washington.

U.S. Secretary of State Mike Pompeo this week pledged to nudge his Japanese and Korean counterparts to "find a way forward."

But Miyake says that Washington remained silent for too long.

"Americans might have had opportunities in the past to do something to unwind or solve these disputes," he says.

The window of opportunity that might have been open a year or two ago is now shut, Miyake says. Political decisions in Seoul and Tokyo are signed and sealed, and it will be hard for anyone to walk them back.