Accessibility links
'Strange Harvests' Turns Nature's Fairy Tales Inside Out Edward Posnett's book is more than an impressive add to the modern travelogue: it refuses to accept the landscape at face value as it paints remote terrain in visceral and breathtaking prose. 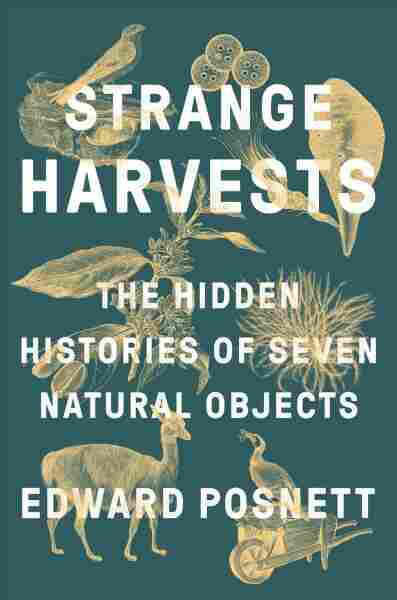 When I was a kid, my favorite stuffed animal was — by all appearances — a pretty standard teddy bear. Though purple, it was nonetheless furry and fat and darling in all the obligatory ways.

What the adults couldn't see — or so I told myself — was that it was actually an insatiable monster. My monster. By inverting its head through its mouth, one could unleash its Mr. Hyde, revealing razor-sharp teeth and bloodshot eyes, the kind of beast inclined to eat the innocent version alive, spilling its entrails like spaghetti on the rocks. Not so cute anymore, are we? I thought. To an 8-year-old boy, the secret was thrilling.

Strange Harvests: The Hidden Histories of Seven Natural Objects, the first book from Bodley Head/Financial Times Essay Prize-winner Edward Posnett, usurps the reader's expectations in at least seven similar ways. The premise, for anyone who has ever crafted or contemplated a book proposal, is enviably simple: Inspired by his research into the Icelandic eiderdown harvest, in which farmers and eider ducks peaceably co-exist, Posnett travels the globe in search of similar harvests "predicated on cooperation rather than domination." Limiting the hunt to seven specific items — eiderdown, vicuna fiber, sea silk, vegetable ivory, civet coffee, guano, and edible birds' nests — he presents the book as a Wunderkammer, a curiosity cabinet meant not only to awe, but to help the viewer "visualize the connections between things and understand networks of relationship."

Each chapter tackles one item, illustrating its peculiar history and tracing the trajectory of its demand. Extending the narrative into the 21st century, Posnett — who formerly worked in finance in London's Canary Warf — globetrots from the Westfjords of Iceland to the caves of Sarawak to the forests of western Java and beyond to witness the harvests first hand. Were it nothing else, Strange Harvests would be an impressive addition to the modern travelogue, painting some of the world's most remote terrain in visceral and sometimes breathtaking prose:

"Every day the birds tumbled off the cliff to gorge on fish, returned to their nests, and dumped their ammonia-rich excrement, baked in the constant equatorial heat," he writes in a particularly surreal chapter on the guano harvest in Peru's Chincha Islands. "The process never stopped, and if a month could become a moment, the island would have risen as bread, casting a lengthening shadow across the water."

But unlike so many slick travel narratives accepting the landscape at face value, strengthening the state-sponsored veneer, Strange Harvests probes much deeper. What initially appears to be an Arcadian enterprise — gathering the eider's down after it leaves the nest, trimming mollusk beards (byssus) on the ocean floor, shearing the woolly mane of the vicuña — soon loses its wonder. Like my childhood teddy bear, each of these items — fairy-tale trappings on the surface — possess a complicated, if not altogether unseemly underbelly. Eiderdown farmers are vanishing in tandem with rural depopulation, for example, and the history of the harvest is soaked in the blood of the eiders' predators: ravens; eagles; and especially the arctic fox. What remains of the sea silk harvest in Sardinia has been monopolized by a single woman, called the maestro, who — though fervently rejecting its commercialization — has instead perverted and commodified its narrative through her own popular museum:

"I also saw that in [the maestro] Chiara's alchemical conversion—the reconstruction of an island's identity for a foreign appetite—there lay historical loss, upheaval, and conflict," he writes. "As the logic of the museum spread, its confines dissolved by the media, the island was slowly becoming detached, uprooted from its own history like a shell from an anchor of byssus."

The unmasking continues. Though each item is tackled individually, Posnett occasionally references the other harvests, juxtaposing one against the other, as he moves throughout the cabinet. It's an effective, if simple technique, providing a welcome barometer for the ethics and sustainability of each item. Less welcome are several instances of chronological puddle jumping, the essays pivoting abruptly between historical anecdotes or characters — a minor sin in light of an otherwise engrossing read, one made even more so by the author's honesty, his willingness to admit the disappointments.

"Despite the differing textures or functions of down, saliva, or seeds, the human relationships within each chain remained the same, a site of constant conflict," he writes. "You could take the objects, arrange them in different orders, but the patterns they formed were always the same: To follow each object was to trace the flow of a liquid that, having welled up like oil at the harvest, flowed outward in channels, coagulating in distant pools, from offshore accounts to country houses."

The final effect of Strange Harvests is manifold: As Posnett follows the money from creator to consumer, he skews the foreign ever more local. In this way, the world shrinks. And yet, in meeting the men and women still performing these seemingly alien or ancient trades, climbing bamboo poles to snatch swiftlet nests from dank caves in Malaysia or gathering in the hundreds to corral wild vicuñas for shearing — one feels the opposite: that this world still contains traditions foreign to our modern mode of thinking. That it contains wonders.

If Strange Harvests never quite offers an answer, never quite finds that perfect symbiosis, it's nevertheless a thought-provoking tour. Like Posnett at the outset of his quest, the reader is left "with a vague sensation that by simply existing, eating food, breathing, and excreting, I was caught up in stories I did not understand."