Accessibility links
White House Looks To Protect Venezuelans In U.S. Illegally From Deportation The administration is reviewing steps to protect thousands of Venezuelans living in the U.S. from deportation even as it seeks to restrict more asylum-seekers from claiming refuge.

Amid Border Crackdown, White House May Shield Venezuelans From Deportation

Amid Border Crackdown, White House May Shield Venezuelans From Deportation 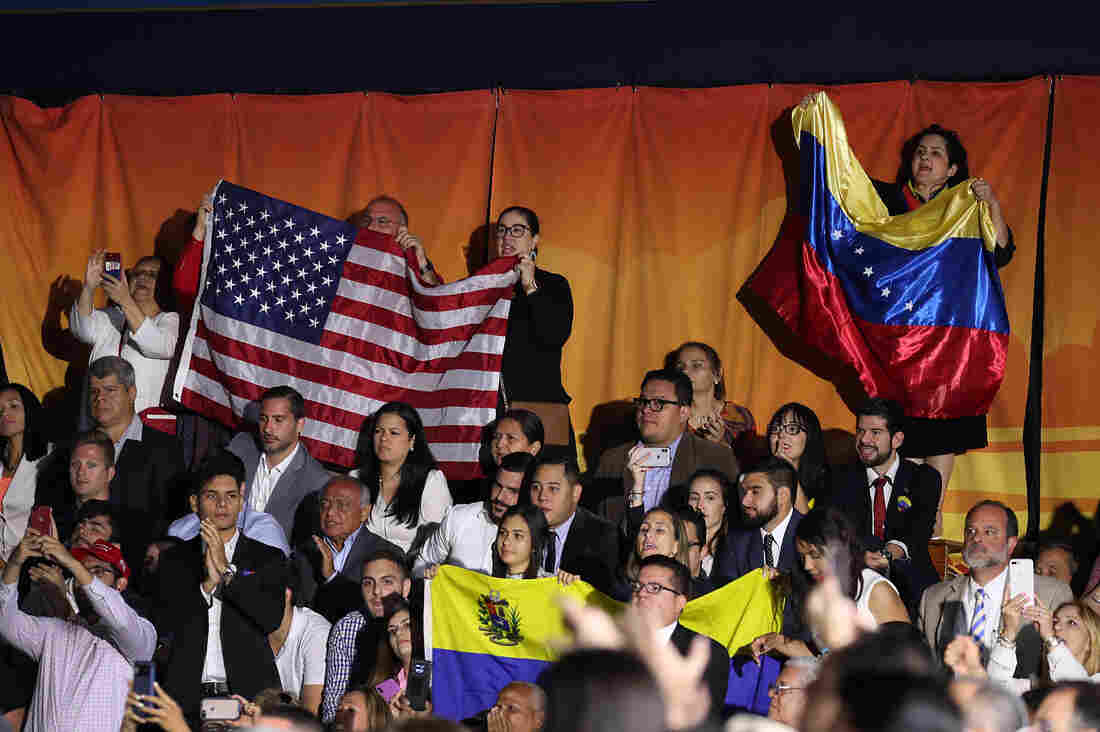 People listen as President Trump speaks during a Feb. 18 rally at Florida International University in Miami, where he addressed the crisis in Venezuela. Trump's administration is considering protected status for Venezuelans living in the U.S. Joe Raedle/Getty Images hide caption 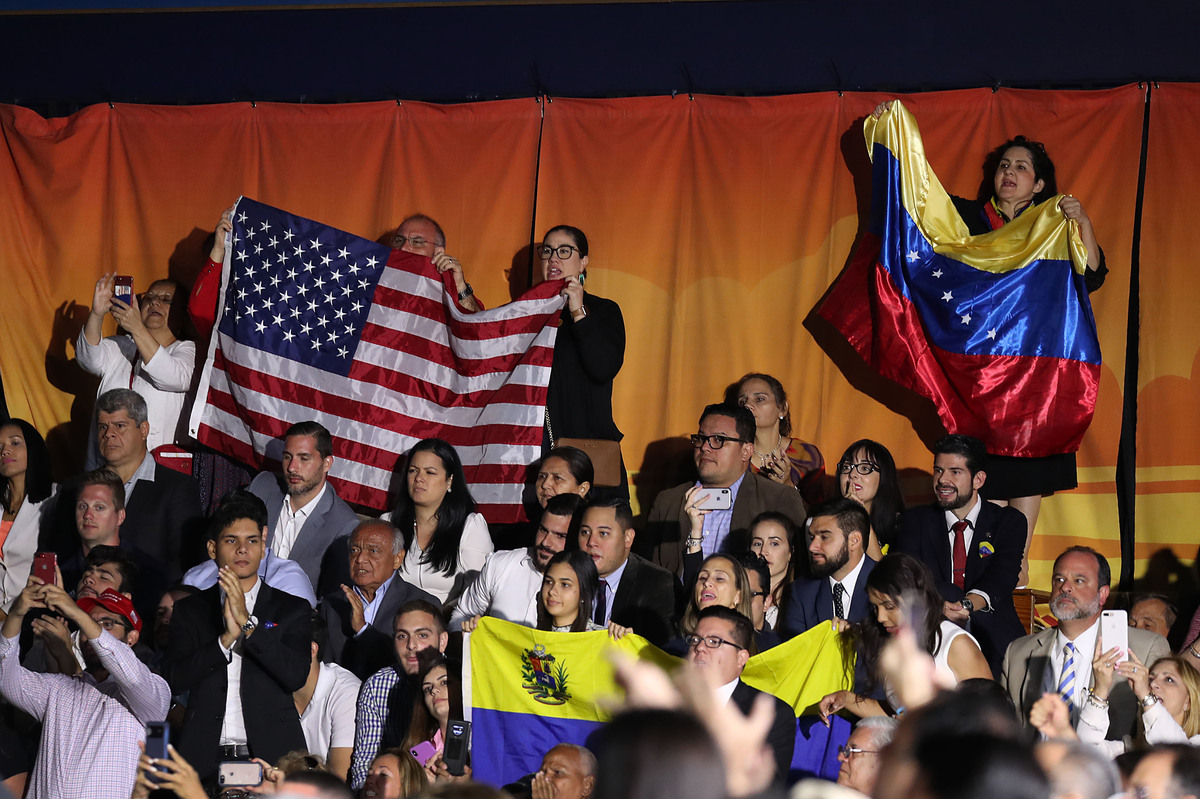 People listen as President Trump speaks during a Feb. 18 rally at Florida International University in Miami, where he addressed the crisis in Venezuela. Trump's administration is considering protected status for Venezuelans living in the U.S.

The White House is on the verge of taking steps to protect thousands of Venezuelans living in the United States from deportation, even as it finds new ways to restrict the ability of asylum-seekers from other countries to claim refuge in the U.S.

The proposal was confirmed by a senior administration official and other U.S. officials familiar with the matter, and it could include work permits. It is controversial inside the Trump administration, which has sought to restrict immigration, and could provoke a backlash from some of Trump's allies. But the administration says it does not want to put Venezuelans in danger.

"We're committed to ensure that no Venezuelan is sent back to a situation where they'll be persecuted by the government of Venezuela or by the dictatorship that is usurping democracy in Venezuela," a senior administration official told NPR and other news outlets Friday.

But there are also political considerations in Florida, a key battleground state, where fear is growing in Venezuelan immigrant communities that friends and loved ones could be deported back to the embattled country.

Top officials at the White House and across the administration have been holding discussions about the possibility of granting temporary protected status or similar protections — such as a lesser known program called Deferred Enforced Departure — which would give qualified recipients the chance to legally remain in the country and get work permits.

The administration's first priority is to replace the Venezuelan government of Nicolás Maduro so Venezuelans don't have to fear returning to their country, the senior administration official said.

"We all understand and we're very cognizant of the risks that Venezuelans face being sent back," the official said. "In that regard, whether it's called TPS, or something else, there is a host of mechanisms that are under consideration that we're looking at."

Many Venezuelans in Miami and across the country have been living in fear that they could be deported at any moment.

Julio, a 46-year-old tech worker, arrived this spring in Florida on a tourist visa that has since expired. He said he fled Venezuela after complaining about corruption at the government institution where he worked for over a decade. He asked that his last name not be used for fear of authorities searching for him, and he said he worried about returning to Venezuela where he could be in danger of being persecuted for speaking out or losing the limited benefits that the public receives.

"The situation is as bad or worse than what you see on television," he said. "It's run by a group of people who do whatever they want and with great power. Really, that is not how you can run a country. It's not a democracy."

Sen. Marco Rubio, R-Fla., who is seen as one of the president's principal advisers on Western Hemisphere issues, has been pushing the administration to take administrative steps to protect Venezuelans after legislation that would have done so failed to advance in the Senate this week. The Congressional Budget Office estimated that 200,000 Venezuelans in the U.S. would have been eligible for TPS status.

Rubio has told constituents that the White House is working on something that would be equivalent to TPS and prevent deportations while also allowing Venezuelans to work.

"We've made progress," Rubio said in a video to constituents. "We have a few more hurdles to climb and clear. But I think, hopefully, fingers crossed, we're going to have some good news soon from the administration on this."

UPDATE on #VenezuelaTPS & other options for getting temporary legal status for those already in the U.S. who simply can’t return to #Venezuela due to persecution & the humanitarian crisis created by the #MaduroRegime pic.twitter.com/VxvXYlT7As

The proposals to protect Venezuelans come as the Trump administration is trying to end temporary protected status for numerous countries, including El Salvador, Haiti and Sudan, under pressure from conservatives.

Trump has said repeatedly that it's up to Congress to protect TPS holders, so the possibility of granting a status similar to TPS to Venezuelans without Congress has rankled some conservative groups that see it as another form of amnesty.

RJ Hauman, the government relations director at FAIR, which advocates for stronger immigration enforcement, said too often the program has been extended far beyond any reasonable definition of temporary.

"Before providing TPS to nationals of yet another country, Congress must first ensure that it is actually temporary, as the 'T' in its name clearly indicates," Hauman said. "They must also address eligibility issues. TPS should not be granted to people who are in the country illegally. Illegal aliens, for the most part, have no intention of honoring a commitment to return home."

Some Florida Republicans are warning Trump that he needs to take steps to protect Venezuelans in South Florida from being deported after raising hopes of a change of government in Venezuela.

Hauman said that the U.S. federal government is already limiting the number of Venezuelans being deported and cited federal statistics that showed just 584 Venezuelans have been deported in the last two fiscal years.

"A new day is coming"

In February, Trump told the largest Venezuelan community in the United States that "a new day is coming in Latin America."

Trump Warns Venezuela's Maduro Supporters: 'You Will Lose Everything'

Speaking in Miami before large American and Venezuelan flags, Trump spoke of wanting a peaceful transition of power but emphasized that "all options are open."

"We want to restore Venezuelan democracy, and we believe that the Venezuelan military and its leadership have a vital role to play in this process," Trump said. "If you choose this path, you have the opportunity to help forge a safe and prosperous future for all the people of Venezuela."

Six months later, Maduro remains in power, in defiance of U.S. and international efforts to oust him.

Andrew Selee, president of the Migration Policy Institute, said these programs are supposed to be humanitarian in nature, but the decisions are always partly political. As an example, he noted the contrast between the administration's willingness to consider some form of relief for Venezuelan immigrants who are in the country illegally and its efforts to block all possible avenues for asylum-seekers from Central America.

"This is a particularly political administration when it comes to immigration issues," Selee said. "The Trump administration sees Venezuelan migrants as victims of a corrupt regime and Central Americans as job seekers, although the reality may be much more complicated in both cases."