Accessibility links
Should Rivers Have Same Legal Rights As Humans? A Growing Number Of Voices Say Yes "Environmental personhood" was once considered a fringe issue, but several countries have granted rivers within their borders legal person status. Bangladesh became the latest in July.

Should Rivers Have Same Legal Rights As Humans? A Growing Number Of Voices Say Yes

Should Rivers Have Same Legal Rights As Humans? A Growing Number Of Voices Say Yes 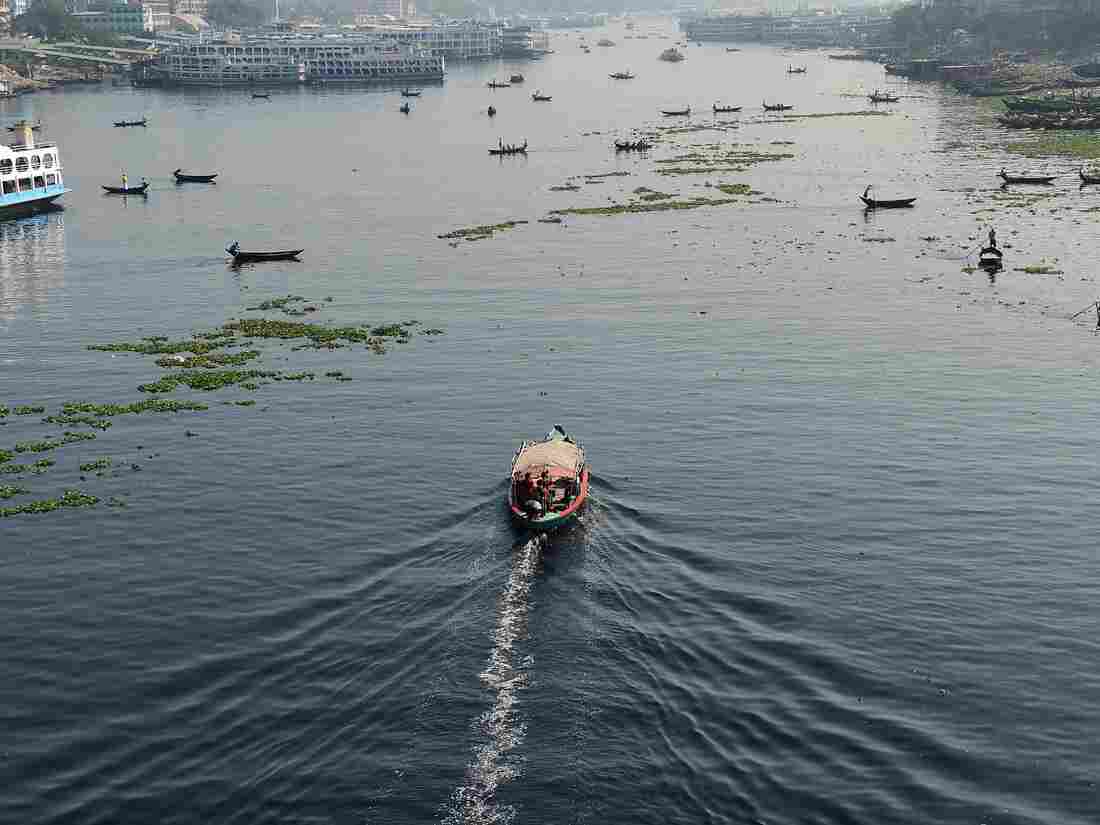 Bangladeshi commuters use boats to cross the Buriganga River in the capital Dhaka in 2018. In July, Bangladesh's top court granted all the country's rivers the same legal rights as humans. Munir Uz Zaman/AFP/Getty Images hide caption 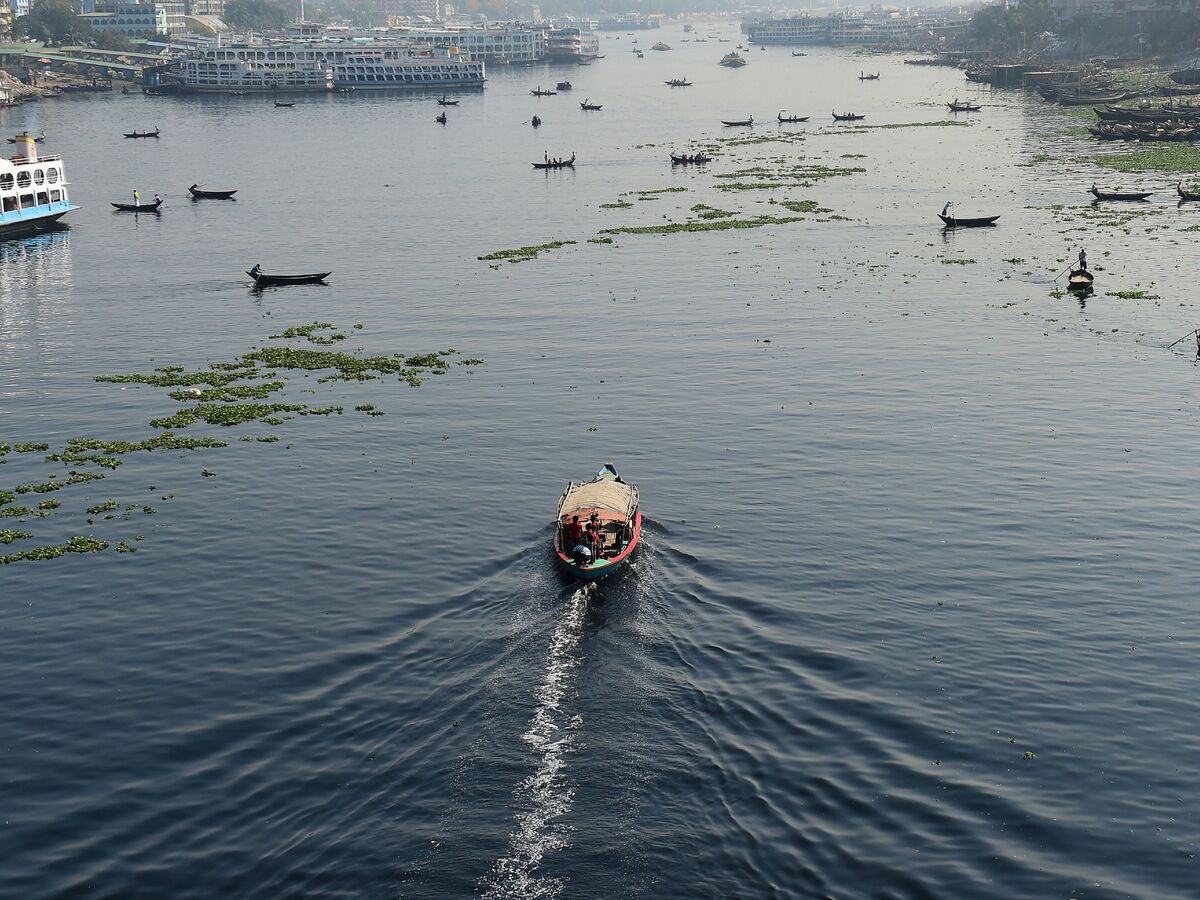 Bangladeshi commuters use boats to cross the Buriganga River in the capital Dhaka in 2018. In July, Bangladesh's top court granted all the country's rivers the same legal rights as humans.

In early July, Bangladesh became the first country to grant all of its rivers the same legal status as humans. From now on, its rivers will be treated as living entities in a court of law. The landmark ruling by the Bangladeshi Supreme Court is meant to protect the world's largest delta from further degradation from pollution, illegal dredging and human intrusion.

"In Bangladesh, the river is considered as our mother," says Mohammad Abdul Matin, general secretary of Bangladesh Poribesh Andolon, a Dhaka-based environmental group. As Bangladesh sits where three major rivers converge and empty into the Bay of Bengal, nearly 100% of its land is delta land, he tells NPR.

Following the ruling, anyone accused of harming the rivers can be taken to court by the new, government-appointed National River Conservation Commission. They may be tried and delivered a verdict as if they had harmed their own mother, Matin says.

"The river is now considered by law, by code, a living entity, so you'll have to face the consequence by law if you do anything that kills the river," Matin says.

What is environmental personhood?

The river is now considered by law, by code, a living entity, so you'll have to face the consequence by law if you do anything that kills the river.

Bangladesh follows a handful of countries that have subscribed to an idea known as environmental personhood. It was first highlighted in essays by University of Southern California law professor Christopher D. Stone, collected into a 1974 book titled Should Trees Have Standing? Toward Legal Rights for Natural Objects. Stone argued that if an environmental entity is given "legal personality," it cannot be owned and has the right to appear in court.

Traditionally, nature has been subject to a Western-conceived legal regime of property-based ownership, says Monti Aguirre with the environmental group International Rivers.

"That means ... an owner has the right to modify their features, their natural features, or to destroy them all at will," Aguirre says.

The idea of environmental personhood turns that paradigm on its head by recognizing that nature has rights and that those rights should be enforced by a court of law. It's a philosophical idea, says Aguirre, with indigenous communities leading the charge.

"Many indigenous communities recognize nature as a subject with personhood deserving of protection and respect, rather than looking at it as a merchandise or commodity over which are property rights should be exercised," she says.

And the movement is growing, she says, though with variations.

In 2008, Ecuador became the first country to enshrine the legal rights of nature in its constitution. Bolivia passed a similar law in 2011. Meanwhile, New Zealand in 2017 became the first country to grant a specific river legal rights, followed by the Indian state of Uttarakhand. This year, the city of Toledo, Ohio, passed what is known as the Lake Erie Bill of Rights to protect its shores, making it one of several U.S. communities to have passed legislation recognizing the rights of nature.

Yet, the idea of what these laws hope to accomplish is where the similarities stop, as their legal bases and the range of socio-environmental and economic problems they're meant to solve vary from country to country. Many of the laws have also been met with resistance from industry, farmers and river communities, who argue that giving nature personhood infringes on their rights and livelihoods.

This inconsistent patchwork of approaches has inevitably led to difficulties in enforcement, says Erin O'Donnell, an academic fellow at the University of Melbourne Law School in Australia.

In a 2018 study co-authored with Julia Talbot-Jones, O'Donnell shows that the onus of enforcement will fall on whoever is deemed the guardian of the waterway. And that can be anyone from a court-appointed body to the government itself — which may have chosen not to participate in environmentally friendly practices in the past — to nongovernmental organizations.

In Ecuador, says O'Donnell, the Global Alliance for Rights of Nature and others sued a construction company trying to build a road across the Vilcabamba River and initially won in court.

But when the construction company didn't comply with the court's ruling, "the NGO could not afford to run a second case," says O'Donnell.

What's more, the trans-boundary nature of rivers makes enforcement inherently difficult. This issue has come up in India, where the high court in Uttarakhand state in 2017 recognized the Ganges and Yamuna rivers as legal persons because of their "sacred and revered" status. The court named the state government as their guardians.

Soon after, the state government appealed to the Indian Supreme Court, arguing "that their responsibilities as guardians of the rivers were unclear because the rivers extended well beyond the border of Uttarakhand," says O'Donnell.

New Zealand media announces the settlement of the country's longest-running case, in which the government recognizes the Te Awa Tupua, a river on the North Island, as an ancestor of the local Maori tribes, the Whanganui.

"So they felt they had a jurisdictional problem, and secondly, because of the way the court constructed legal personality in that case, they were extremely concerned that as guardians, they would be held responsible for the actions of the river," O'Donnell says.

Trans-boundary issues are also a concern for the newly-minted Bangladesh law, as nature activists in Dhaka tell NPR that they know they can't force neighboring countries, such as India, to comply with the new law.

There is, however, one place where legal rights were given to a river with buy-in from both the government and its people, O'Donnell says: New Zealand.

A spectrum of results

When New Zealand granted the Te Awa Tupua, a river on the North Island, the same legal status as a person, the government did so by recognizing it as an ancestor of the local Maori tribes, the Whanganui.

The Whanganui "have a famous saying which says in English, 'The river flows from the mountain to the sea. I am the river. The river is me,' " says Chris Finlayson, a former New Zealand attorney general who was in charge of negotiating with indigenous groups from 2008 to 2017.

As the law appoints two guardians to act on behalf of the river — one from the New Zealand government, the other from the Whanganui iwi, or Maori group — it is unique in that it legally binds the river to the tribe, Finlayson says.

In other words, harming the river is tantamount to harming the tribe itself. And while no lawsuits have been filed on behalf of the river since the legislation was passed, Finlayson says he can already see behavioral changes taking place. A local district council, for example, reached out to consult the river guardians ahead of introducing plans to build a bike path that would stretch over the river.

Finlayson says the most difficult part in passing the legislation was getting New Zealand's European-descendant majority "to see the world through Maori eyes."

"Maori make up 15% of the population," Finlayson says. "And so the presence of the various stakeholders who have legitimate interests in the [Whanganui] river need to also be recognized."

The struggle to achieve this paradigm shift is also taking place on the shores of Lake Erie, in Toledo, Ohio. Earlier this year, the city passed an ordinance that would allow the its citizens to sue on behalf of the lake, arguing that it had gotten so polluted, there was no choice.

The ordinance's constitutionality was immediately challenged by a farm in a federal lawsuit. The farm argued the ordinance made it vulnerable "to massive liability" when it fertilizes its fields "because it can never guarantee that all runoff will be prevented from entering the Lake Erie watershed." Then the state of Ohio joined that lawsuit, arguing it — not the citizens of Toledo — has the "legal responsibility" for environmental regulatory programs.

"What's interesting is the state of Ohio intervening on behalf of the polluter, not on behalf of the people who passed the law," says Tish O'Dell, the Ohio community organizer for the Community Environmental Legal Defense Fund.

The lawsuit is ongoing, though O'Dell predicts the ordinance will ultimately be overturned.

"But what I would say to people is it doesn't matter what happens in the courts in Toledo with this case, because the genie has been let out of the bottle. And as hard as they want to try to put it back in, the people shouldn't let them," O'Dell says. "I mean, we have to change our environmental protection in this country and across the world, because obviously what we're doing isn't working."