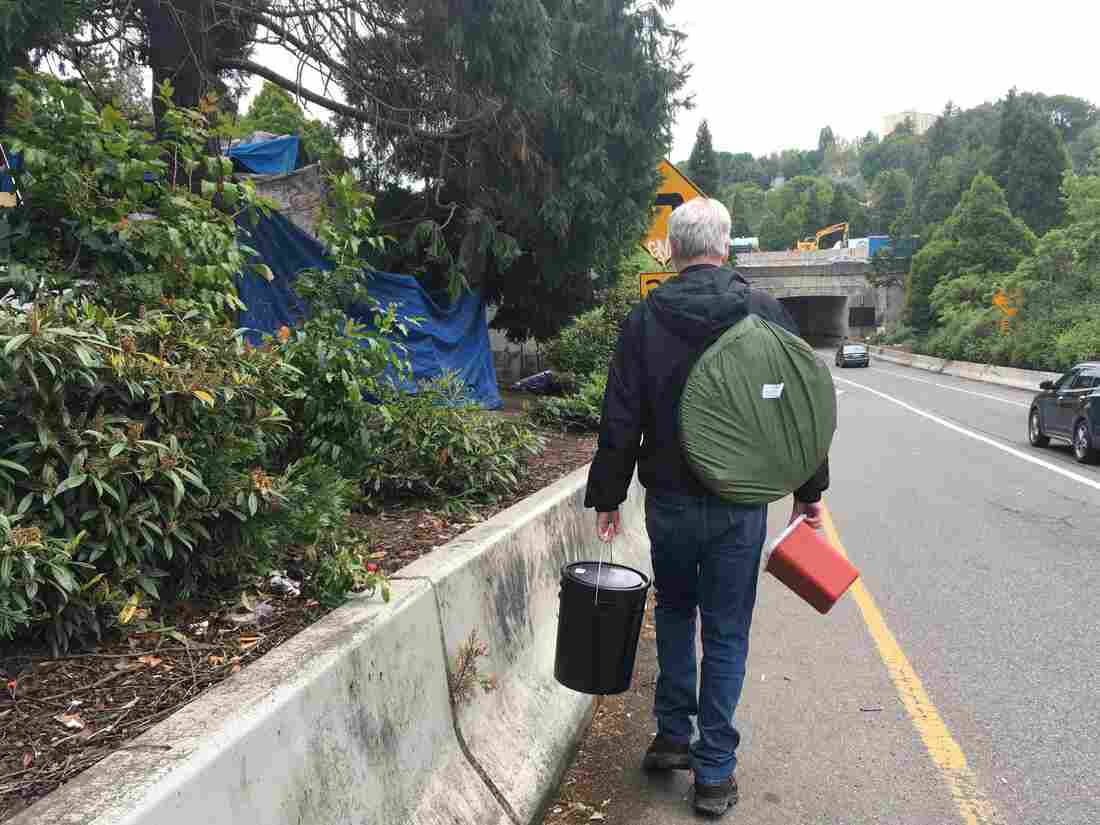 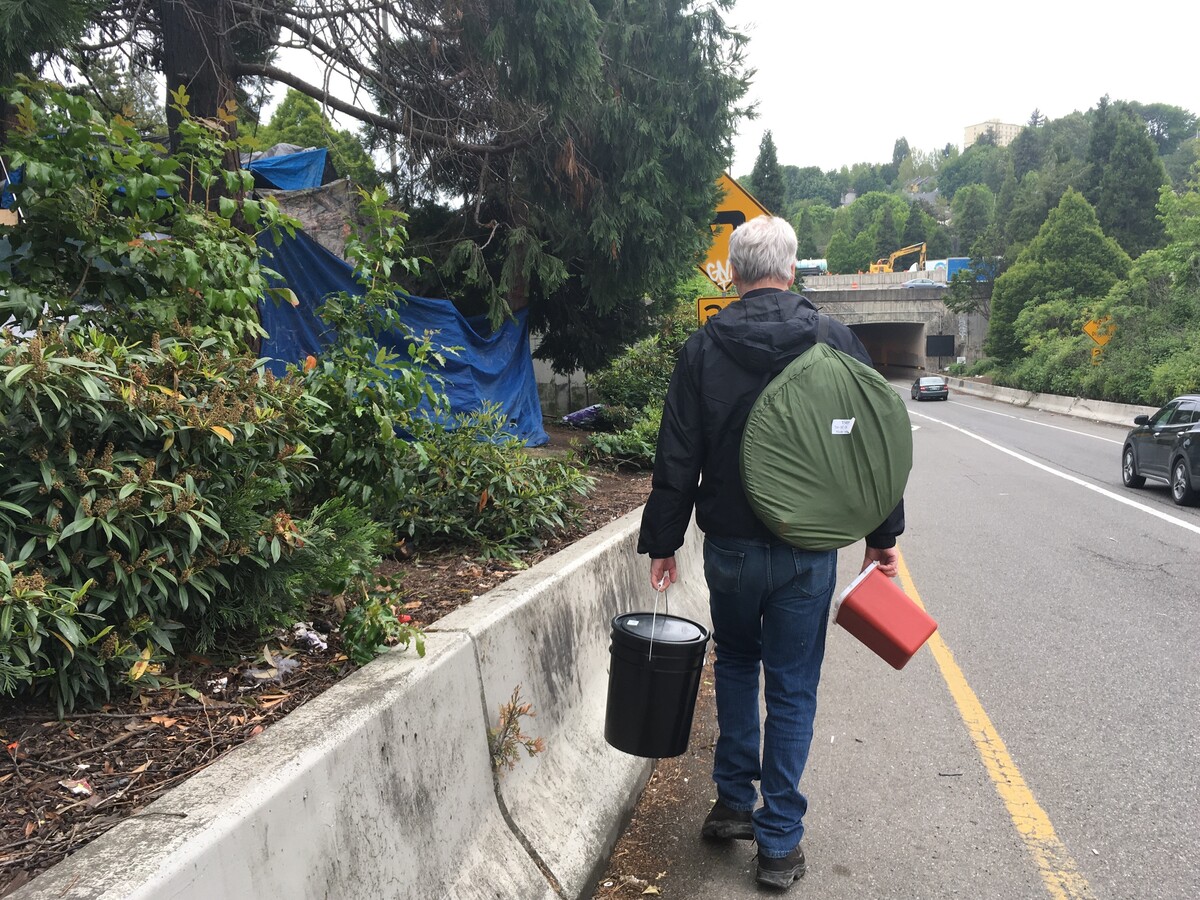 Mark Lloyd pulls up to a group of 10 tents near a freeway on-ramp, pops his trunk and pulls out his supplies: cat litter, a small military surplus tent, toilet paper, sanitizer, and a 5-gallon plastic bucket, complete with toilet seat.

This is the rudimentary toilet setup that Lloyd has been assembling and delivering to homeless encampments for about three years now. He guesses he has given away between 75 and 100.

"It's something people need, and I can fill it," he says.

That need has cities across the country wrestling with a major public health challenge: how to provide sanitation to growing populations of unsheltered people. San Francisco is staffing public toilets to serve homeless people. Washington, D.C., is conducting pilot programs to increase access to public toilets.

It has been a perennial issue in Seattle.

Lloyd started his guerrilla toilet distribution project after he saw encampments popping up and spreading in his Seattle neighborhood, just east of downtown. He felt compelled to become involved, get to know the people and see what they needed. The answer, judging by the litter on the ground, was pretty clear.

Without that, we're having to squat in the bushes and no privacy whatsoever.

"In many ways, we're a very prosperous city," Lloyd says, "but we have people living in tents, in camps, that have no working sanitation."

Lloyd is not a professional activist or social worker — he's a software guy by day. He isn't affiliated with any particular group or nonprofit, and he doesn't seek donations. He does all of this with his own money, on his own time.

On this day, he is dropping by several of the camps that have sprung up around the Interstate 90 on-ramps at Rainier Avenue in Seattle. One of his stops is to meet with a young woman named Megan Besgrove, who says she has been living in the area for a year and a half. Lloyd is delivering her a replacement toilet, as well as a sharps container for used needles.

"It makes a huge difference," Besgrove says. "Without that, we're having to squat in the bushes and no privacy whatsoever and people come around the corner and see you. It's really, really invasive. With these things there's, like, privacy. And I know I've had way less [urinary tract infections] and stuff like that because of it. It makes it a lot better for us."

Lloyd says it's gratifying to help people live in a healthier setting and take care of their basic biological needs with dignity. But, he says, toilets are really just the first step. 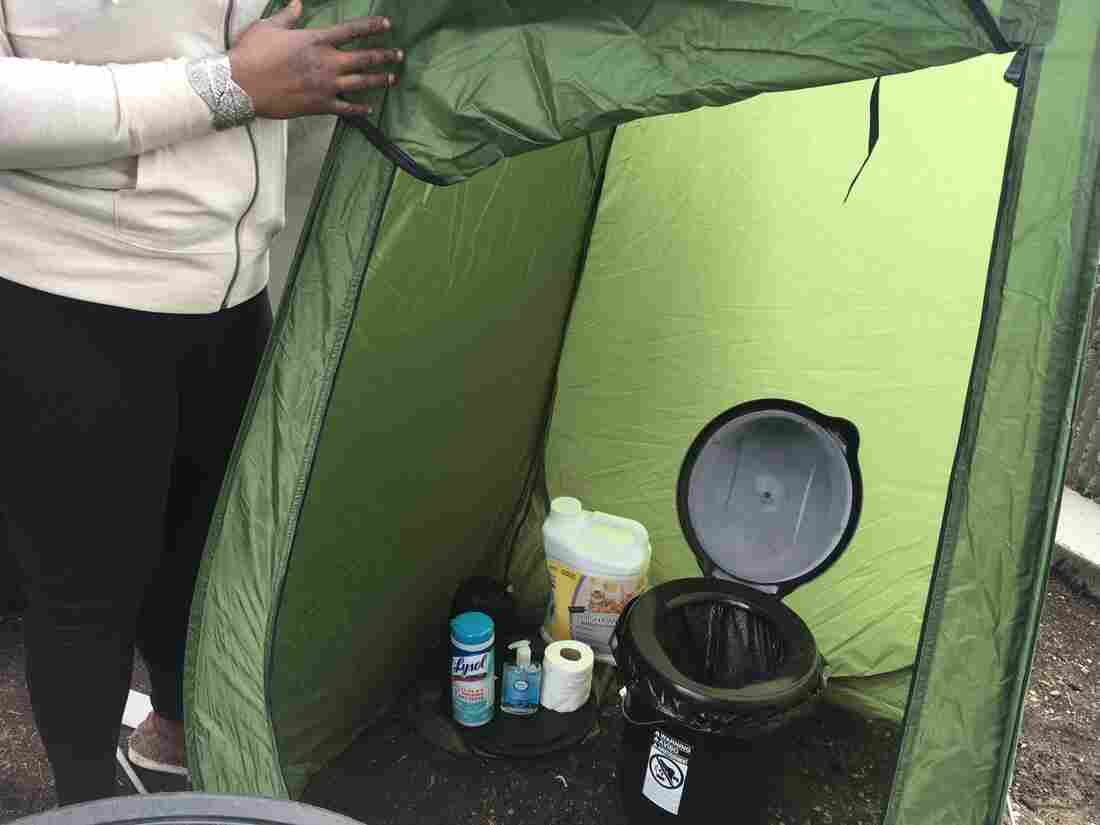 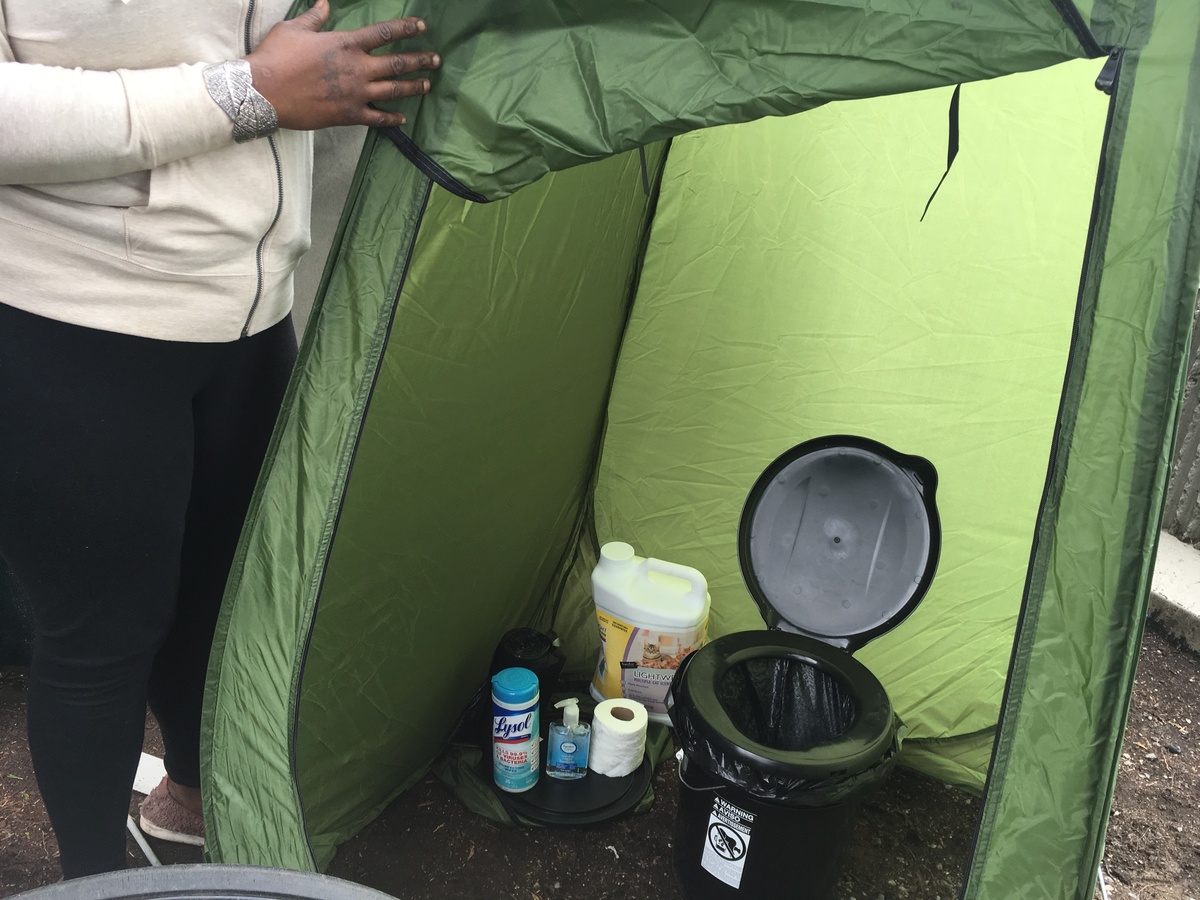 "I really like giving out toilets and feeling like I'm doing something there, but I feel the most value when I've been able to help someone out who I've gotten to know," he says. "You know, taking someone to the hospital, talking to them about getting them maybe into drug treatment, connecting them with people that I know with the city to get them into housing."

Lloyd is also well aware that to some, what he's doing looks like enabling.

"I'm quite happy to accept that," he says. "And I try to own that, and I always feel like I have to do enough that any of that, I'm sort of counterbalancing. I have a saying, that is: 'If you have moral clarity, you aren't in deep enough.' "

Lloyd says starting with the basics and then forging a human connection can pay off.

For example, there was an elderly man who had been living outside. Lloyd says he had given the man a toilet and continued to check in on him over the years. Then the man, whose health was failing, was hospitalized.

With no family in the picture, Lloyd would visit him. Eventually, he offered to contact the man's estranged daughter. He agreed.

"And I was sitting there with my phone with one of these video chats, with them talking for the first time in years. And they ended up getting together. And he still can be a challenging person, but he's reconciled with his daughter," Lloyd says.

This only happened, says Lloyd, because he had gotten to know this man as a human being — a connection that, in this case and many others, started with a toilet.