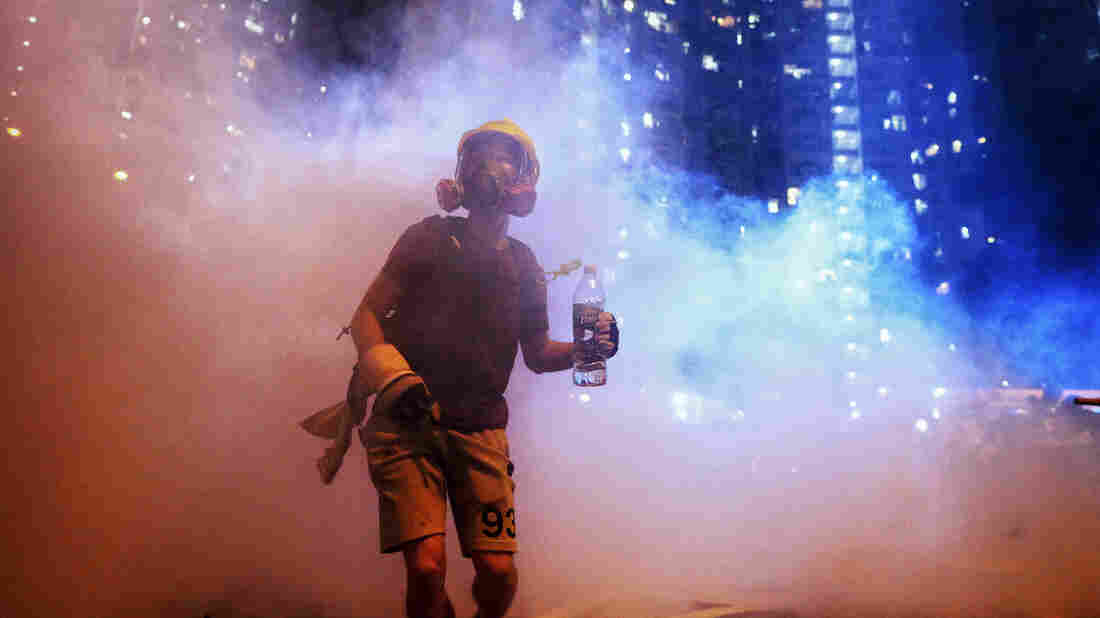 A protester stands in the midst of tear gas during a confrontation with police in Hong Kong during the early hours of Sunday local time. Elson Li/AP hide caption 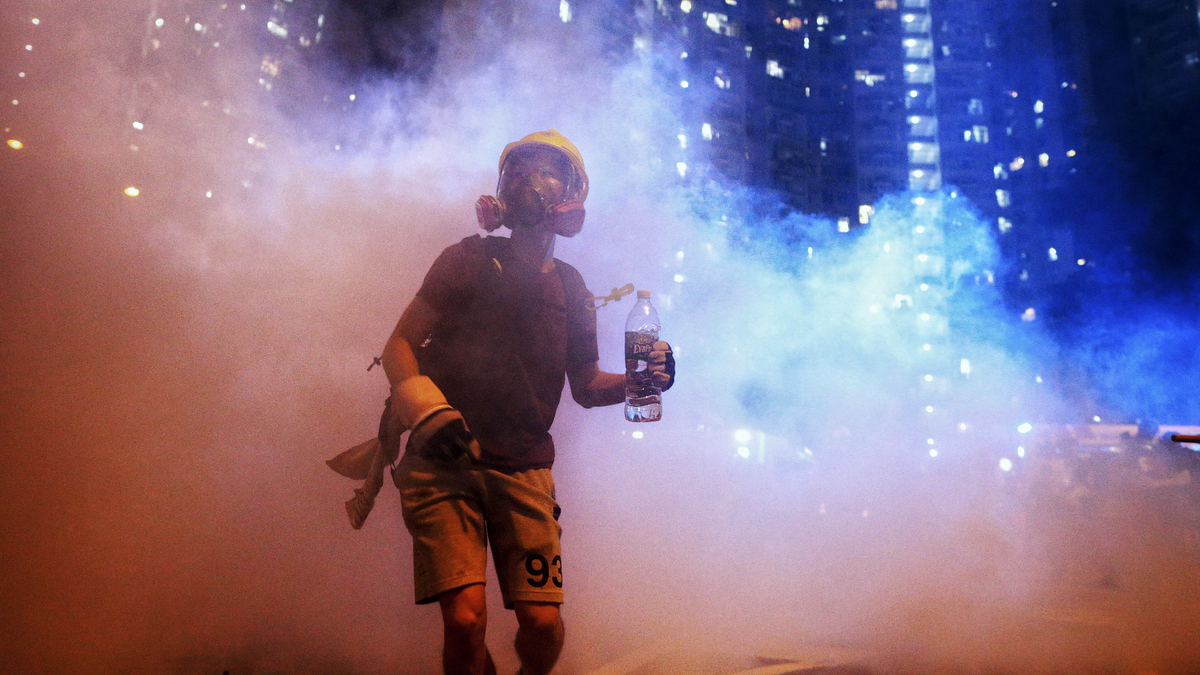 A protester stands in the midst of tear gas during a confrontation with police in Hong Kong during the early hours of Sunday local time.

Police in Hong Kong fired several rounds of tear gas at protesters on Saturday. According to The Associated Press, they were responding to demonstrators who vandalized a police station and threw bricks at it. Tens of thousands of protesters, dressed in black, had convened for a rally — and some reportedly threw a Chinese flag into Victoria Harbour.

Protesters created a barricade between themselves and police, who were raising banners warning of tear gas use. The demonstrators also formed a barrier by setting cardboard on fire, the Associated Press reported.

Saturday's protest passed its preapproved endpoint — a transgression that police had warned was illegal.

This is the second week in a row that Hong Kong protests have involved charged confrontations between pro-democracy demonstrators and police.

Last Sunday, protesters and police clashed on the island's two main thoroughfares. Protesters were armed with bricks, paint bombs and bottles. Riot police reportedly responded with tear gas and rubber bullets, according to NPR's Julie McCarthy. Police have since charged 44 protesters at those demonstrations with rioting; the protesters could face up to 10 years in jail.

Pro-democracy activist Joshua Wong has called this season the "summer of discontent." Wong has said millions have come out to demand more protections for civic freedoms. Late last month, thousands of demonstrators occupied the arrivals terminal of the Hong Kong International Airport.

The recent mass protests in Hong Kong were triggered by a proposed extradition bill. The legislation would allow Hong Kong's government to approve extradition to China on a case-by-case basis for certain crimes. Opponents of the bill fear it could be used to target outspoken critics of China.

Hong Kong' leader Carrie Lam responded to protests in mid-June by suspending the bill, and she has since called the legislation "dead." But protesters have continued to demonstrate because Lam has not formally withdrawn the bill. The demonstrators have been calling for Lam's resignation, and they have also made additional demands concerning direct elections and policing.

As protesters made their way through a popular shopping district called Mong Kok on Saturday, some shop owners provided them with drinks.

"At one corner shop, umbrellas — a symbol of the city's pro-democracy movement — were on prominent display," wrote the Associated Press. Elsewhere in the city, thousands of white-clad demonstrators gathered to express support for the police.

China regained control of Hong Kong, a former British colony, in 1997. At that time, China agreed that Hong Kong could keep its capitalist system. And though a Beijing-appointed committee selected the island's chief executives to start, China promised that Hong Kong would one day be guaranteed its own democratic elections.

When Chinese President Xi Jinping came to power as general secretary of the Communist Party in 2012, however, mainland control over Hong Kong expanded. According to NPR's Anthony Kuhn, "China under Xi has emphasized the central government's authority while downplaying Hong Kong's autonomy."

"When the 'one country, two systems policy' expires in 2047, it seems Beijing intends to take control of a city that has already been tamed and emptied of any serious resistance," Kuhn wrote.

For years, protesters in Hong Kong have expressed fears about the future of self-government in the territory. In 2014, after Beijing insisted on vetting all candidates for Hong Kong's next chief executive, mass protests lasted for months. But that movement, called the "Umbrella Revolution," failed to guarantee Hong Kong the right to nominate its own political candidates and elect its own leaders.

Earlier this year, a Hong Kong court sentenced a group of demonstrators to up to 16 months of jail for their role in the Umbrella Movement.