Accessibility links
The Victims Of The Dayton Shooting: What We Know So Far The nine people who died in the shooting early Sunday in Dayton, Ohio, range in age from 22 to 57. They include four women and five men. 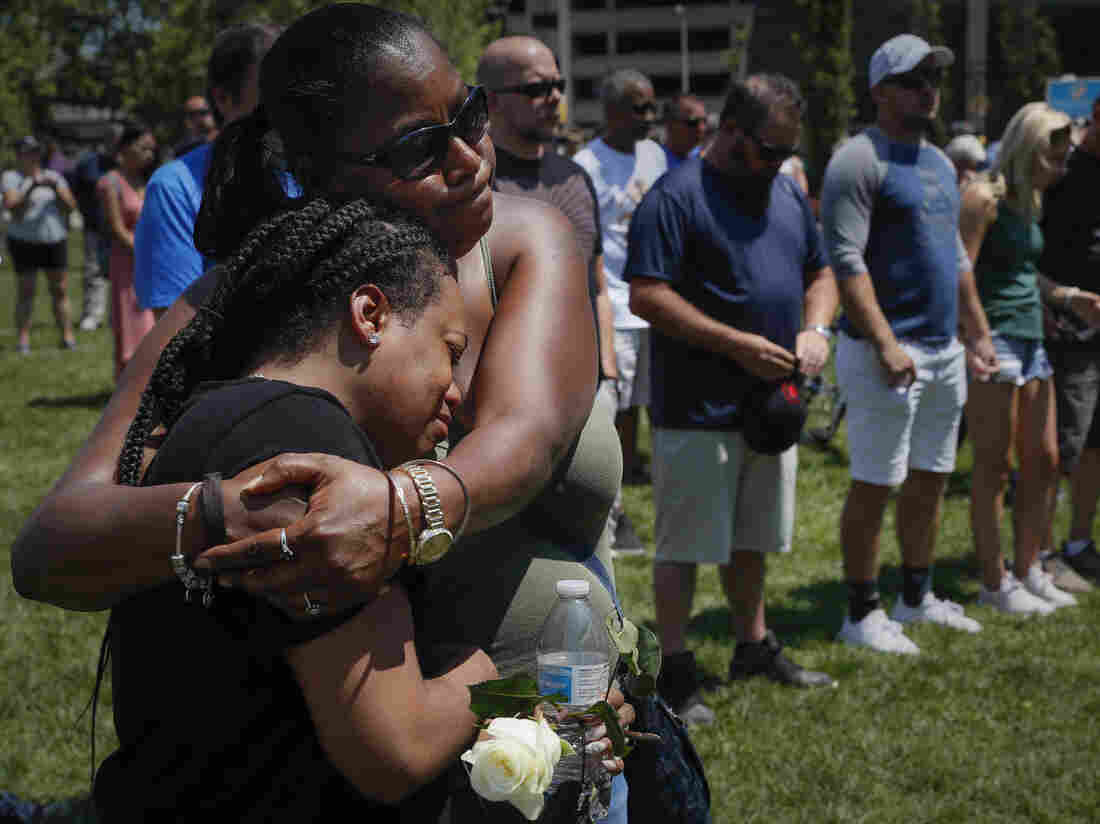 Mourners gather at a vigil following a nearby mass shooting on Sunday in Dayton, Ohio. John Minchillo/AP hide caption 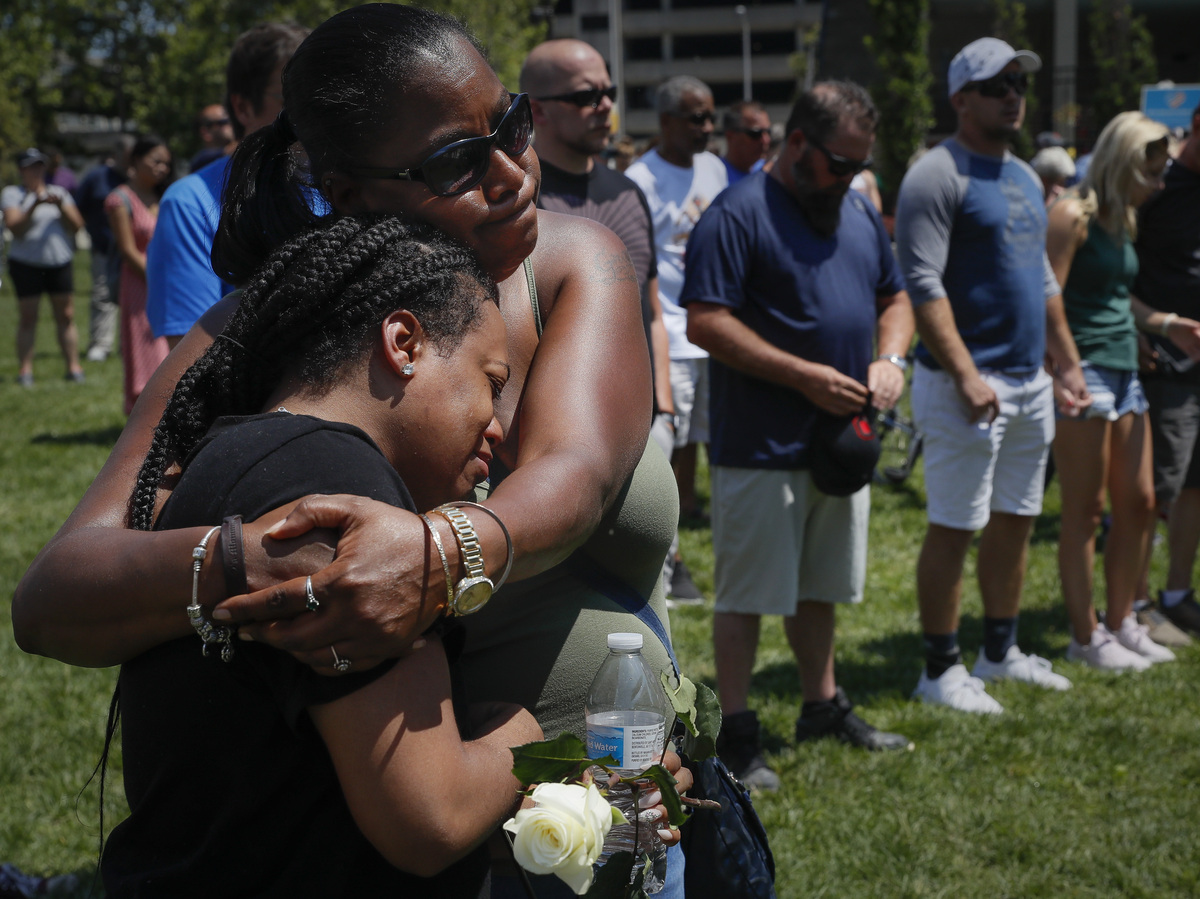 Mourners gather at a vigil following a nearby mass shooting on Sunday in Dayton, Ohio.

Police have identified the nine people who were killed after a shooter fired dozens of rounds into a busy street in Dayton, Ohio, early Sunday morning.

The people who died range in age from 22 to 57, and they include four women and five men. Police say the attacker, who was killed at the scene, is 24-year-old Connor Betts. They identified one of the victims as his 22-year-old sister, Megan Betts.

At least 27 other people were injured during the attack — which came just hours after 20 were killed and 26 wounded in a separate mass shooting in El Paso, Texas.

Here is a list of those who died in Dayton:

Oglesby was in nursing school and was the mother of two children, according to a friend quoted in the Dayton Daily News. She had recently returned from maternity leave. "She was a wonderful mother, a wonderful person," Derasha Merrett told the newspaper. "I have cried so much, I can't cry anymore."

Betts, the shooter's sister, was a student at Wright State University studying earth and environmental sciences. According to her LinkedIn page, she spent the past four months as a tour guide at the Missoula Smokejumper Visitor Center in Montana, where visitors learn about fighting fires in remote areas with no roads.

Dayton Police Chief Richard Biehl told reporters that the siblings came together to the city's Oregon District before the attack, though the brother separated from his sister and another friend at some point in the evening. Biehl said that Betts was one of the first people killed in the attack and that their friend was among the injured.

When asked about the family, Biehl said, "I think you can imagine this is a nightmare for them, and I think they are struggling, as you can understand."

It wasn't immediately possible to find additional information about Saleh because of his common name.

Fudge was a Springfield, Ohio, resident who was visiting the Oregon District with his son, his niece Asia Fudge told NPR.

"He had a dog ... that he loved dearly. ... He was fun, happy," Asia Fudge said. He is survived by five siblings and his extended family.

"Everyone's just trying to come together and get through it as best as we can," his niece said.

Turner was a resident of Springboro, Ohio, and a machinist at the Thaler Machine Co., according to his LinkedIn page. His mother, Danita Turner, told the Dayton Daily News that he was out on Saturday night in the Oregon District with his friends to celebrate his recent 30th birthday.

"He was very generous and loving and the world's best son," Turner's mother told the newspaper. "Everyone loved Logan. He was a happy-go-lucky guy."

Turner's mother said he was a graduate of Sinclair Community College and the University of Toledo, where he had studied engineering.

Cumer was a graduate student in the master of cancer care program at Saint Francis University in Loretto, Penn., according to a statement released by the school on Sunday afternoon.

"Nicholas was dedicated to caring for others," wrote the university's president, Malachi Van Tassell. "He was recognized at the 2019 Community Engagement Awards among students who had completed 100+ hours of service. In addition he was a graduate assistant with the university marching band."

Cumer had been in Dayton this summer completing an internship program with the Maple Tree Cancer Alliance.

McNichols was a father of four from Dayton, according to the Dayton Daily News. His two daughters and two sons range from ages 2 to 8. His aunt, Donna Johnson, told the newspaper that everyone regarded him as a "gentle giant."

Jevin Lamar, a cousin of McNichols, told the New York Times that McNichols, who went by Teejay, was "a great father, a great brother — he was a protector."

Johnson said McNichols attended Dunbar High School in the city and worked at a Dayton factory. She added that McNichols went to the Oregon District on Saturday night with a cousin.

Brickhouse hailed from Springfield, Ohio, and lived in Virginia Beach, Va., according to her social media profiles. She worked as a recovery specialist for Anthem, her LinkedIn profile states. Her Facebook profile also advertises a design, event planning and catering business called "Two Good Girls."

Brickhouse attended Springfield South High School and the College for America at Southern New Hampshire University, according to her LinkedIn page.

Warren-Curtis resided in Carrollton, Va., according to public records.

She appears to have been friends with Brickhouse. A Facebook post mourns both of them and suggests that she went by Nicole, her middle name. "To lose a loved one to senseless violence is just unfair, especially since it could be preventable !!" the post says.